Book Review: F1 in Montreal: from Villeneuve to Hamilton

There have only been a few books written about the Grand Prix du Canada, which is taking place this weekend at Circuit Gilles-Villeneuve on Ilse Notre-Dame in Montreal.

In his 1970 book, Challenge, the late Len Coates told the story of the first few Grands Prix held at what was then Mosport Park in Ontario and at Le Circuit-Mont Tremblant in Quebec. Prof. David Charters of the University of New Brunswick, in his 2007 book, Our Chequered Past, also took a look back at them.

By far the most thorough reporting of the first 16 Canadian Grand Prix races, beginning with the inaugural one in 1967 and continuing through the race in 1983 (there wasn’t one held in 1975) was by Gerald Donaldson in his 1984 book, The Grand Prix of Canada. Now, when I say thorough, I mean thorough.

Donaldson’s prose brings the races alive. The photographs — some of them, anyway — are stunning. No fact or figure is ignored — there are entry lists, qualifying results, lap charts, race results, season points standings topped off by each year’s world champion and so-on.

To my knowledge, Donaldson has never done another book specifically about the Canadian GP but he’s written about two dozen others dealing with Formula One and Grand Prix racing and each (with the exception, perhaps, of his biography of Juan Manuel Fangio) includes information about Canada.

My reason for writing this particular column on his particular weekend, however, is because there is now a fourth book to add to this list. This particular Grand Prix marks the 40th anniversary of the Canadian Grand Prix being held in Montreal and a book of about 300 photographs with text in both of Canada’s official languages has been published in time for the celebration.

Entitled F1 in Montreal: from Villeneuve to Hamilton, the Grands Prix are seen through the lens of photographer Bernard Brault, with text by Normand Prieur and a forward by Ross Brawn. It is published by Québec Amérique and available at book stores and online.

Brault is an award-winning photographer who now works for the Montreal daily La Presse. He was just starting his career in 1978 when his local weekly paper, Le Courier du Sud, assigned him to photograph the first Grand Prix to be held on Ilse Notre Dame. He’s worked every race since and has made and filed away more than 100,000 photos.

I first met Normand Prieur at a Yorkville restaurant in 2009, the year that Francois Dumontier took over from Normand Legault as president and CEO of the Grand Prix. Dumontier was keen to meet the Toronto media to emphasize that the GP belonged to all Canadians, not just the people of Montreal. Prieur is a good guy who went on to handle PR for the race, act as national press officer for a few years and be managing editor of the race program. He is now in semi-retirement and consults for the Grand Prix.

In a long-distance telephone conversation the other day, I asked Normand how this new book came about.

“Last October, Francois Dumontier asked some media to come to Circuit Gilles-Villeneuve for a promotion,” he said. “Oct. 8 was the anniversary of Gilles Villeneuve’s first F1 victory in 1978 and there has been a slogan on the pavement at the start/finish line, ‘Salut Gilles!’ and they had added, ‘Quarante ans!’ So it was ‘Salut Gilles, 40 years,’ and the promotion was that you could buy a General Admission ticket for $19.78. It was there that I ran into Bernard Brault.”

So Brault and Prieur got to talking and after the photographer mentioned that he’d been present for that first race in 1978, Prieur suggested he might be the only photographer who had been accredited for all the GPs since.

“He has zillions of photos at home,” Prieur said, “so I said, ‘You should do a book,’ and he said, ‘Why don’t you do the text? We could choose the pictures together.’ I did a synopsis of what we had planned and three Montreal publishing houses showed interest. Québec Amérique came with the best offer and the 280-page book came off the press May 15. We’re happy and we’re proud. It’s a nice piece.”

Prieur said he asked his photographic partner to do some pre-selecting and then “we went through about 10,000 photos to get the 300 that are in the book. We didn’t argue; we didn’t have disagreements. We were able to agree on everything.”

I asked Prieur for his favourite Grand Prix memories among races that featured legendary F1 drivers like Nelson Piquet, Ayrton Senna and Nigel Mansell and he said he had four.

“Like every Quebec kid, I was thrilled when Gilles Villeneuve won that first race in Montreal in ’78. I saw it on TV and when he won, it was quite something. Nobody expected it — Ferrari weren’t particularly strong that year and Gilles had a lot of promise but he hadn’t delivered. It was a surprise but the best surprise.

“Then, in 1995, when Jean Alesi won. It was also an unexpected victory but very popular because he was a guy that Quebec fans loved. It wasn’t just that he drove for Ferrari and had Gilles’ number (27). He was French and he spoke with that funny southern France accent; he was from Provence. As Quebecers, we were treated for the first 10 years by all the French drivers who came to race in Montreal. There was Alain Prost, and Patrick Tambay, Rene Arnoux, Jean-Pierre Jabouille, Jean-Pierre Jarier and Alesi. It was a very emotional moment when he won. People invaded the track and the back-markers finishing the last lap had to weave their way through the people on the circuit.

“The first year of Jacques Villeneuve was 1996. The main thing I remember from that year — other than him finishing second in the race — was the press conference at the Montreal Museum of Fine Arts. It was his first appearance in Montreal as a Formula One driver and it was a very eventful time.

“Last, in 2007, Lewis Hamilton won his very first Grand Prix, here in Montreal. He had been close in previous races, but he hadn’t won yet. All the stories were about him. I told my graphic designer to prepare two newspaper ads. If he won in Monaco (the last GP before Canada), the ad would say, ‘He will do it again in Montreal.’ If he didn’t win in Monaco, the ad would say, ‘It will happen in Montreal.’ So that’s what the ad said, ‘It will happen.’ And do you know what? It did happen.”

Prieur will be cheering for Hamilton to win again when the Grand Prix goes to the post tomorrow (he’s won the last three Canadians GPs). Not necessarily because of the book, but because if he’s successful, he would tie Michael Schumacher for most Canadian Grand Prix wins by one driver: seven.

“And then next year, he could go for the record,” said Normand Prieur, already thinking about ways he could suggest for the Grand Prix organizers to publicize and promote that potential accomplishment.

By the way, F1 in Montreal: from Villeneuve to Hamilton, retails for $39.95. I’ve seen an advance copy and the photos are magnificent and the text is lively and informative. I suggest it’s worth every penny. 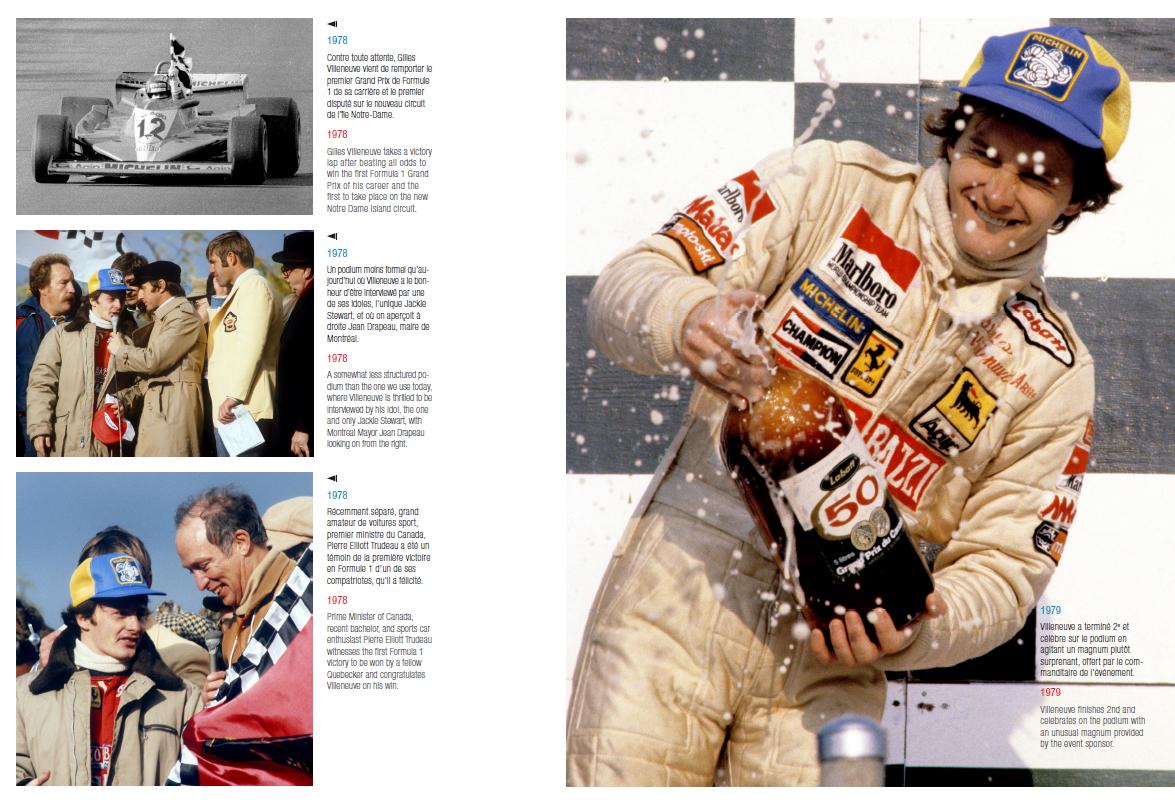