In a world where online deliveries as well as ambulances have literally saved people and businesses in the era of COVID-19, Ford is moving as quick as it can to bring electric full-size commercial vans to market, promising lower total costs as well as zero local emissions, all while using the same overall overall sizes and cargo options to allow companies to add their preferred upfitter equipment as soon as possible.

“Today we’re entering a new era of commercial vehicles, and the very future of work,” pronounced Jim Farley, president and CEO of Ford Motor Company during the E-Transit’s early morning online debut. “E-commerce sales rose nearly 50 per cent in the second quarter (in the US), and delivery vehicle demand grew with it.”

Starting at under $58,000 in Canada, compared to roughly $40k-$50,000 base prices for gas Transit versions, Ford says the E-Transit will appeal to fleet operators that traditionally have a laser focus on total cost of operation by offering an estimated 40 per cent lower TCO over the E-Transit’s lifetime, as well as increasing overall uptime by featuring 90 percent fewer powertrain bits to service in total.

The E-Transit is slated to arrive to Ford’s 95 Canadian commercial dealers in late 2021 as a 2022 model, but the truck is not expected to qualify for Canada’s national or BC’s provincial EV rebate, due to its starting price, barring any changes to either program in the next year or so. It’s expected to qualify for Quebec’s $8,000 EV incentive however, a major boon for businesses and noisy downtown neighbourhoods there. 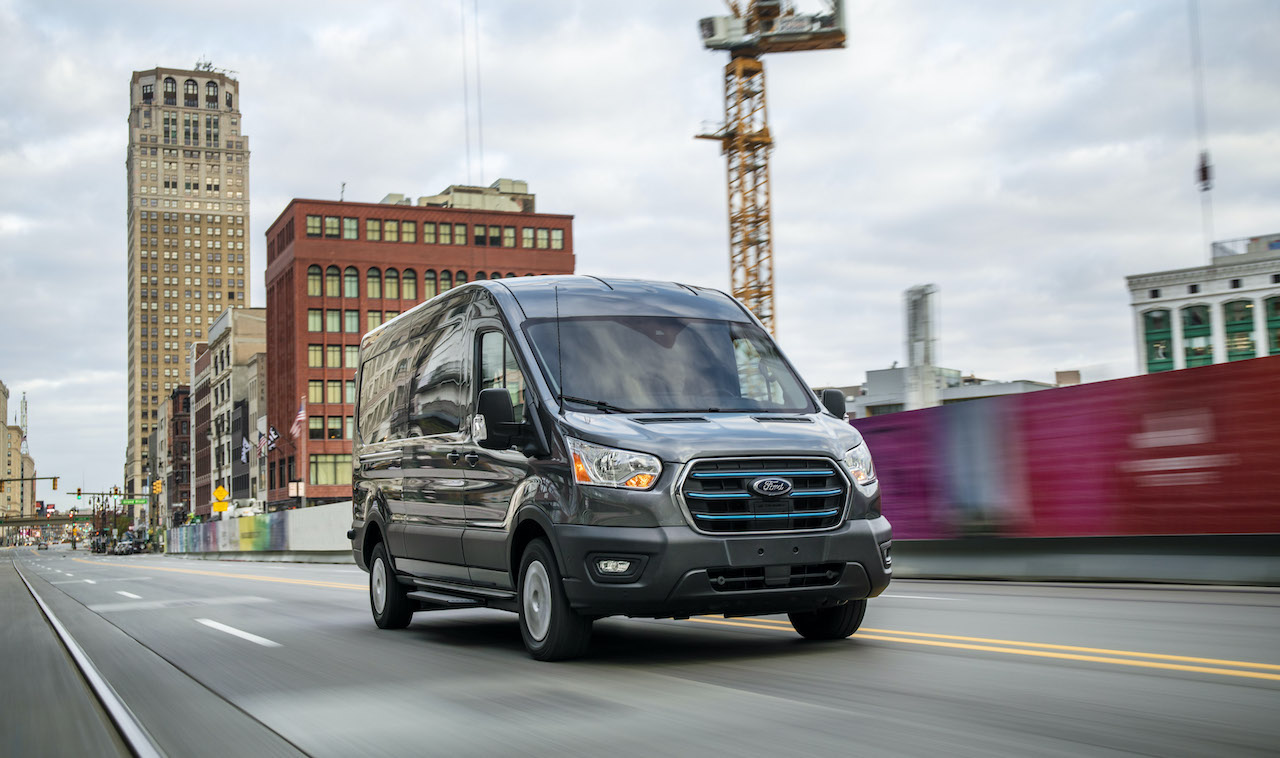 The E-Transit will offer six different versions, with three wheelbase and three height options to choose from, but all will offer the same LG Chem battery that’s roughly the size of that in the base Mustang Mach-E. The E-Transit will come with a battery of 67 kWh of usable capacity (compared to the base Mach-E’s 68 kWh), also nestled here in the floor of the truck.

But unlike in the small pack Mach-E, that battery pack will deliver roughly 200 km of range, Ford estimates, in the much larger and heavier E-Transit. Looking at the base Mach-E’s target range of 355 km, Ford seems to have factored in that most of its E-Transit customers upfit their vehicles with shelves and equipment particular to their business, so it’s likely that the range figures provided by Ford may vary significantly depending on each firm’s extra equipment needs.

Charging will be like with most EVs, available at three basic speed levels: sipping slowly when connected to a regular 120-volt outlet; at level two (240 volts), where it can add up to 24 kilometres per charging hour; or level three DC fast charging, which a 115 kW or higher DC fast charger will be able to provide 48 km of range in roughly 10 minutes, or 72 km in 15 minutes, according to Ford’s estimates.

Like range, these charging speeds will vary in colder weather, but Ford estimates that for most customers, the vehicles will only need charging overnight, or on scheduled downtime. 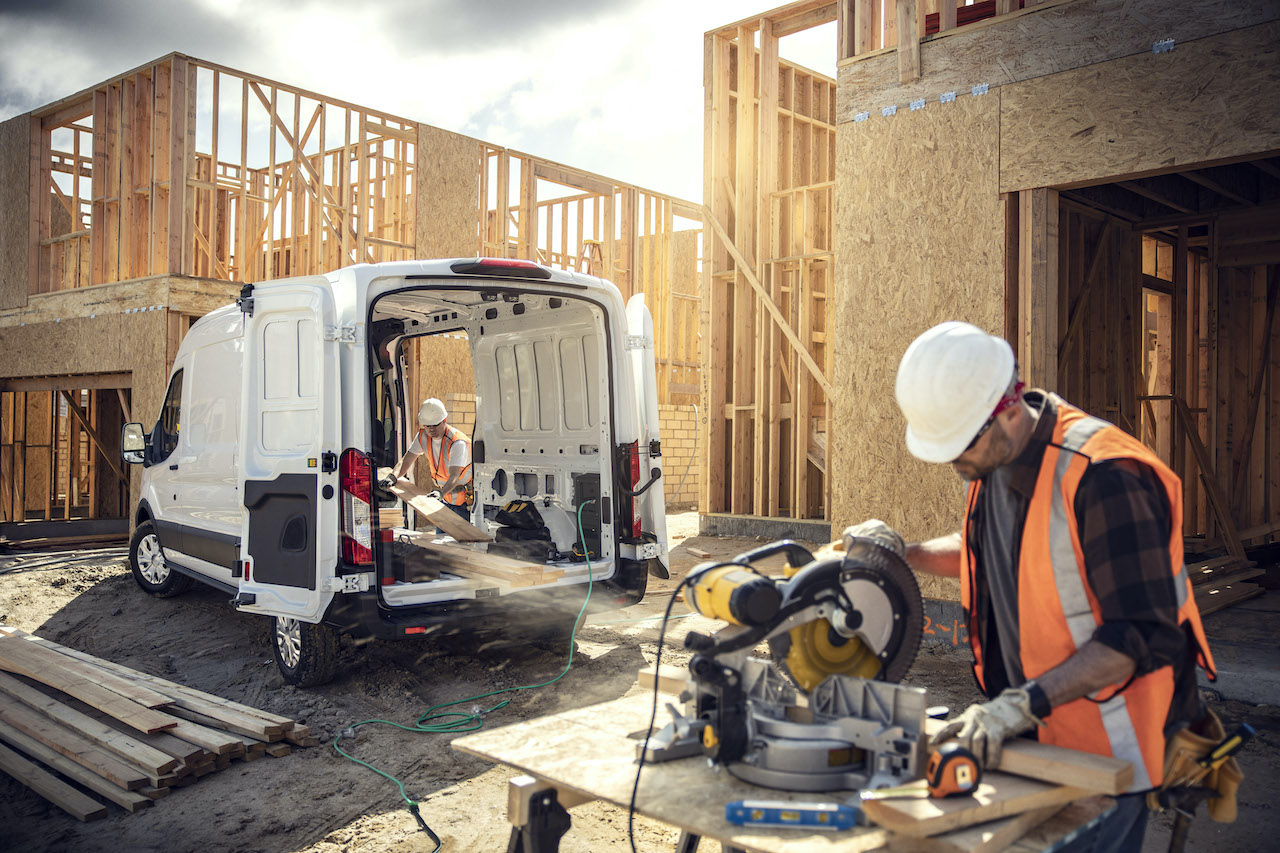 With roughly 266 hp and 317 lb-ft of torque, which is significantly more torque than the gas Transit, the E-Transit also shares very similar power outputs to the base Mach-E. However, it does not offer all-wheel drive, and at launch will come in rear-drive only, just like the regular Transit. That was in part to make sure they could offer the E-Transit as quickly as possible, but also because the vast majority of these customers are not asking for AWD at the moment, said Transit chief engineer Ray Eyles in a media session later on launch day.

There will be an advanced app to help fleet managers schedule deliveries and maximize uptime, and for drivers who drive the E-Transit home to track electricity use and therefore expense it back to the business. Some early plug-in hybrid fleets found that the drivers would rarely or never plug in their vehicles at home because they could expense the gas, but not the electricity used as fuel from home easily.

Inside the E-Transit, a large 12-inch centre screen will offer embedded 4G LTE net access, over the air updates for mapping, real-time information and driver assist software. Walk-through access to the rear is standard, while an available Pro Power Onboard system offers 2.4 kilowatts of clean and quiet power, unlike portable generators or ones needing the engine running.

As a version of the world’s best-selling cargo van, the E-Transit will offer the same roof and length heights as the regular Transit, offering Class 1 to 7 trucks, with a max payload of 3,800 pounds (up to 4,290 for cutaway versions), all with an 8 year/160,000 km warranty. 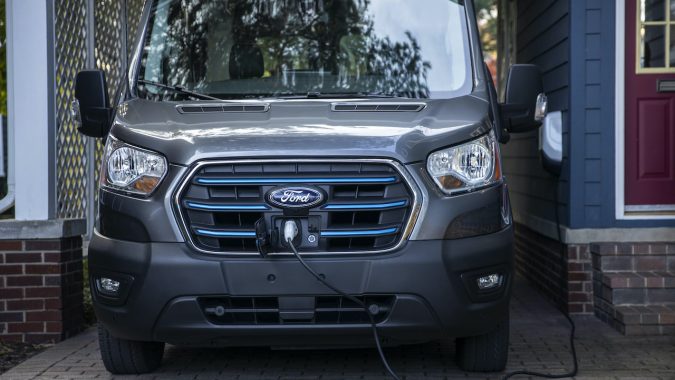 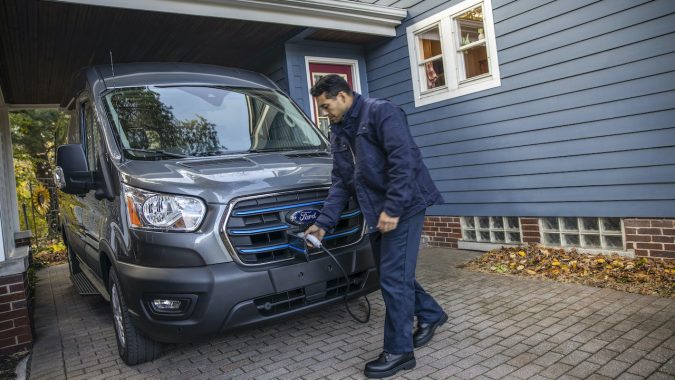