Niki Lauda pauses to look back on his first set of wheels, the F1 legend recalls jumping the Bug

Formula One racing legend Niki Lauda, in Montreal this weekend for the Canadian Grand Prix, is not the sentimental sort.

The three-time world champion gave away many of his early trophies and says he prefers looking forward to new challenges.

Nicknamed “the computer” for his analytical cool, the 64-year-old now serves as a non-executive chairman of the Mercedes AMG Petronas F1 team.

He is also the subject of a soon-to-be released Ron Howard film, Rush, along with his fellow racer James Hunt, who died in 1993. The movie follows the friendly rivalry between the two men during the 1976 season, highlighted by Lauda’s horrific accident at Nurburgring.

Lauda?s love of cars began with a very humble 1949 drophead Volkswagen coupe (a Type 1, later dubbed the Beetle). Lauda, the scion to a wealthy Austrian paper and banking family, bought the car on his own, even though he wasn’t old enough to drive.

“I bought this car for no money whatsoever,” he recalls. “I think it was 1,500 shilling ($100). I got it over to my family’s place, where there was enough land to drive without a driver’s licence.”

“When I drove this car, being so young, I suddenly felt what it is to control these cars in extremes. From then on, I got bigger in my passion.”

A fun-loving teen who ignored his schoolwork ‘ he failed two years of senior school, much to his family’s chagrin ? Lauda took risks and didn’t show a hint of fear. The used Bug took a beating.

“I always looked for places on the grounds where I could jump with this coupe,” he says. “Then, finally, the shock absorber came through (the bodywork) and the car was finished.”

For whatever reason, Lauda says he never had any fear while driving and jumping the Bug.

“It was good because, otherwise, I could not have started racing. Fear was never an issue for me. Not even today.”

After faking his high-school graduation by enlisting a friend to forge his name on his girlfriend?s diploma, Lauda used his graduation money to buy another VW Beetle, in slightly better shape. 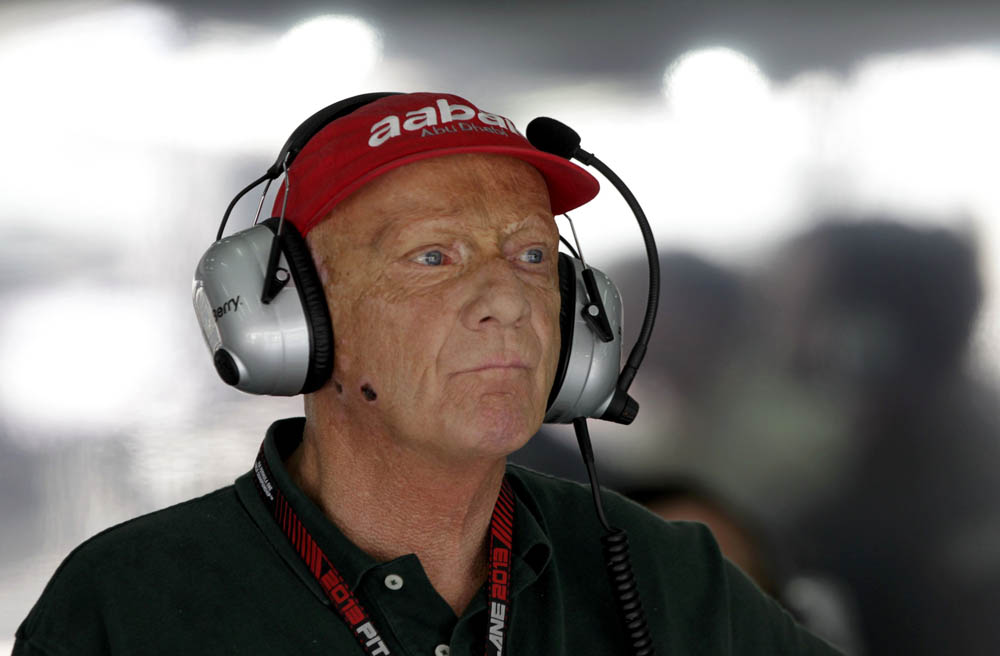 But he soon fell in love with the Mini Cooper S, after driving, and crashing, one on the icy streets of Vienna. Owned by a friend?s father, the now-damaged car was for sale, so Lauda decided to buy it.

?I went to my grandmother to borrow the money to buy it,? he recalls. ?I told her I was going to be in jail, because I threw the father?s car in the guard rail.?

After selling his VW to fix the Mini, Lauda worked out a deal with Austrian racer Fritz Baumgartner to trade it for a racing version Mini Cooper S.

Well, sort of. Getting wind of his ambitions, his family forbade his budding racing career. It was a rift that would take years to mend.

?When I was 19, and when I went to race properly, I had to leave my family,? he admits. ?I went to Salzburg and made my own way, because when they realized what I was up to, they told me, ?No way.? The only (way) I could do it was to go to Salzburg, try to live my own life, and try to work my way into Formula racing and then, finally, into Formula One.?

He says it was a constant struggle. ?It was really an ongoing battle to find support, sponsors and find the right car to move up.?

Lauda has applied those early lessons to his life outside racing, where he is a licenced commercial pilot and a busy entrepreneur who has founded (and sold) two airlines.

?I think I learned ? that you have to find the quickest way to win,? he says. ?Even today, you can only think black and white, and not grey. I always tried to come in the quickest possible way to a result ? if it was the airline business or racing or today with the Mercedes team.?

?For me the worst thing is no decision ? to keep on working with no direction. I prefer to make a decision. Even if it is wrong, it?s better, because then you can correct it later.?

These days, Lauda is remarried, has a young family, and says his favourite car is a Mercedes-Benz CLS Shooting Brake. He?s also rather fond of his private jet, a Bombardier Global 5000.

But despite being one of Ferrari?s top all-time racers (he piloted a 312T), there is no prancing horse in his stable.

?I never collected cars,? he says. ?I never kept any because, whenever I wanted one to collect, I saw the new one coming and the other one was not interesting anymore.?

To find used Volkswagens in your area, search here.