The former Buffalo Bills’ helmsman who led the team to four consecutive Super Bowl appearances is unequivocal when it comes to what he considers a troika of driving sins: passing lane dawdlers, express-lane blockers and, the one that gets him madder than a cranked-up Mike Ditka, litterbugs.

At 6-foot-3, Kelly was known for his toughness on the field, often running a no-huddle offense and calling his own plays. But with his two teenaged daughters frequently in the car, he tries to keep his temper in check — although he does take down licence plate numbers.

“It was 7:30 in the morning,” he says of one recent incident. “I had the kids in the car and it’s bumper-to-bumper traffic. (A guy in a pickup) opens his door and puts a whole McDonald’s bag of trash right on the ground and drives away.”

As a gridiron hero, Kelly is aware he’s easily recognized. And he’s comfortable in his role as one of Buffalo’s best-loved athletes — even though he arrived there reluctantly three years after the Bills drafted him in 1983.

Initially, he chose the USFL’s Houston Gamblers (and a $3.5 million contract) over playing in the cold and snow. When that league folded in 1986, he reported to Buffalo.

Kelly grew up in humble circumstances in a tight-knit family with five brothers in East Brady, Penn. Although he was a star at the University of Miami, the fat paychecks were still years away when he managed to scrounge together enough money to buy his first set of wheels: a very used, mid-’60s Volkswagen Beetle.

“It was all I could afford,” he says. “Being in Miami on the beach, the Beetle, back then, was cool. I mean everybody loved it.

“I didn’t just have AM radio in there; I had FM, which was pretty neat. But that was all I could afford and I liked it, and why not?”

Kelly used the car to get home for the holidays, but hilly Pennsylvania proved to be a challenge one Christmas, with his brother behind the wheel of the fully packed vehicle. With the transmission starting to go, momentum was important. 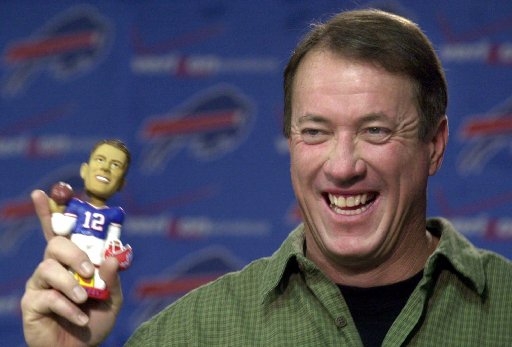 “There were certain hills where he would have to get a good running start at the next hill, to make sure he had enough speed to get to the top of the other side,” Kelly says.

Road trips are part of the U.S. college experience but Kelly relied on his roommate’s Ford Bronco to make an impression during Spring Break in Fort Lauderdale. “If we were ever going anywhere where we really wanted to be cool … we would take his vehicle.”

Kelly recalls the importance of just driving around town as a teenager. He and his brothers all shared time behind the wheel of the family’s Chevy Nova.

“Dad would let us drive down around the football field in our little town every once in a while before we turned 16,” he says.

Once they got their licences, he and his brothers just wanted to drive — anywhere, even for milk, which came in a crate of eight half-gallon glass bottles refilled at a nearby farm.

“The good thing about that was, (the farm) was in the next town eight miles away and dad would say, ‘Okay, we need milk: be back in two hours.’ It probably took 15 to 20 minutes up and 15 to 20 minutes back, but we’d get to keep the vehicle for that extra hour-and-a-half and ride around and act cool.”

With his oldest daughter now about the same age as he was then, Kelly is making sure she puts in time behind the wheel.

She’s even got her first set of wheels — sort of. For her 16th birthday, Kelly and his wife, Jill, surprised her with a pink, four-seater, flower-embossed golf cart, with stereo speakers and her name on the side.

She won’t get her real first car until college, Kelly says. But she’s practicing her driving skills behind the wheel of the family Tahoe, with dad riding shotgun.

Being an engaged father is something Kelly discusses in his new book, A Playbook for Dads: Parenting Your Kids in the Game of Life (written with Ted Kluck). In it, he offers strategies parents can use to raise courteous, respectful, honest and hard-working children.

“I have two beautiful daughters who are God’s blessing, to be honest with you,” he says. “And they know from the firm handshake to the ‘thank-you’… they give a good firm Kelly handshake and that’s the first sign of respect for anybody, whether a boy or girl.”

The Kellys also had a son, Hunter, who died in 2005 at the age of 8 from Krabbe disease, a rare genetic disorder of the nervous system.

Through their Hunter’s Hope Foundation (huntershope.org), the family is working to promote universal screening of newborns for Krabbe disease and other leukodystrophies. Early detection and treatment can save lives.

Kelly recognizes that the holidays can be tough for families with kids who have special medical needs.

“This time of year, the type of support that these families need, just to know that they are not alone — that if you need anybody to talk to, we’re always there for you —– our foundation has done wonders.”