Being a young “car guy” the family sedan wasn’t what I really wanted to drive and I had been saving for years to get my own car – a sports car like Dad’s Fiero.

I grew up on a tobacco farm in Rodney Ontario, a small farming community southwest of London. The first vehicles I ever drove were our farm trucks; a Dodge Ram 1500, Chevrolet Silverado or Ford F-150, my Dad owned them all at one point. The domestic new auto dealers were the only ones in our area and if we wanted to buy a new import car, we had to go to the big city (London).

I drove the farm trucks when I was a kid, even though I was too short to reach the floor pedals, I sat on an older relatives’ lap with the steering wheel in hand. I have so many fond memories of growing up on the farm including driving all of the tractors and other equipment, long before I had a drivers’ licence. Living in a rural area without public transportation or a taxi service, all the kids were eager to get their drivers’ licence as soon as they turned 16 – and buy a car, whatever they could afford, just as a way to get around.

Most teens in my area would borrow their parents car but that wasn’t good enough for me. I dreamed of having a Lamborghini Countach and Ferrari Testarossa like the one in my Dad’s favourite TV show Miami Vice. The coolest car my Dad ever had was a 1986 Pontiac Fiero. I was so proud to ride in it but he got rid of the Fiero before I got to drive it.

I got my beginner drivers’ licence on my sixteenth birthday in 1991 and a full G licence as soon as I was eligible – three months later. I took the driving test in my parents’ Pontiac Grand Prix, a nice family car that they let me borrow when ever I wanted (within reason). Being a young “car guy” the family sedan wasn’t what I really wanted to drive and I had been saving for years to get my own car – a sports car like Dad’s Fiero.

When Dad was shopping for a sports car in 1986, he looked at the Nissan 300ZX and Mazda RX-7 but settled on the less costly Pontiac Fiero. The Fiero was a good looking car but had lots of mechanical problems so Dad got rid of it after a few years. I remember him saying he should have spent the extra money and got the car he really wanted – the 300ZX.

In 1992 after driving the family car for a year I was determined that it was time for me to have my own wheels. I’d saved up a few thousand dollars from my summer job in the tobacco harvest and asked Dad to help me buy a nice sports car. This quest turned into a wonderful bonding experience for the two of us. My favourite car at the time was the current Nissan 300ZX which was not realistic (starting at 40K) so Dad suggested looking for a used previous generation model; the one he wanted years ago.

After a few months of searching through the classified listings in Auto Trader Magazine (before the days of the internet) we found a 1984 Nissan 300ZX Turbo in fair condition with reasonable mileage. Dad and I made a special trip to Toronto to look at the Z. It was beautiful, British Racing Green with tan leather interior. Dad negotiated a good price and we brought it home that day. Dad drove the ZX with a temporary permit and I drove his Grand Prix. 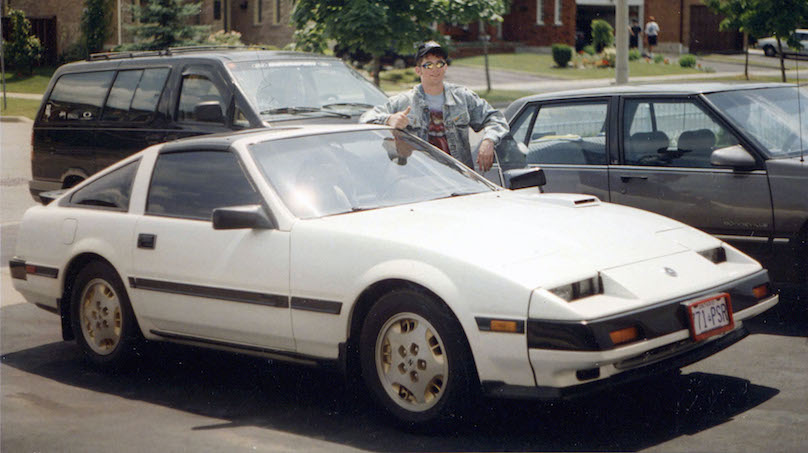 The 1984 Nissan 300ZX Turbo was my pride and joy for the four years I owned it. I was 17 years old and had the nicest car of any kid (or teacher) at my high school. I have so many fond memories with that car; camping in Grand Bend, cruising along the Port Stanley beach boardwalk and showing up in style at my prom. 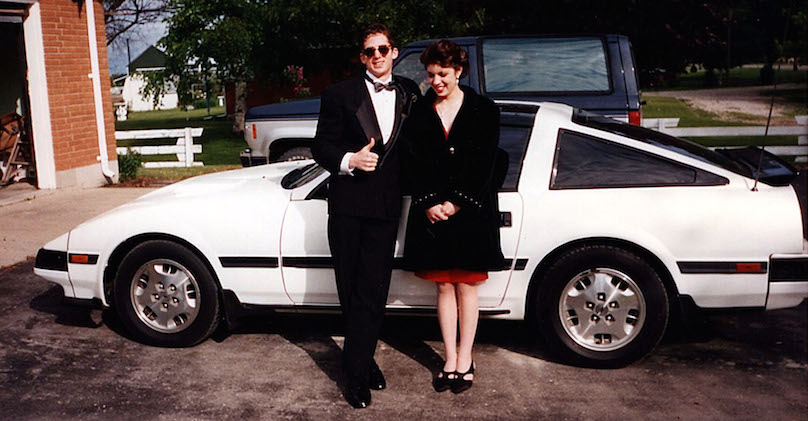 What stands out the most about my experience with owning such a nice car at a young age was how it increased my social confidence and popularity with my peers. I didn’t have much going for me in high school. I was short, not very athletic and socially awkward; but the 300ZX made me feel good. I felt accepted during those difficult teenage years.

This was also the car that started my passion for performance modification. I installed an Alpine CD player and upgraded the speakers. A performance muffler further improved the cars’ sound and appearance. The most significant improvement was having the car painted a brilliant pearl white and tinting the windows for a sharp contrast. I also had the aluminum wheels refinished with gold accents.

When I think back to my beloved first car, I think about what Dad said to me when we were shopping for it and how much I wanted the current 300ZX model. He said, “be patient and one day you’ll have one.” Dad was happy for me when I bought my 1995 300ZX in 2009. He especially liked the colour – pearl white like the previous one we restored together. Dad passed away in 2014 before I bought my “Yellow Pearlglow” Twin Turbo. I miss Dad and I miss my original 1984 300ZX but I know that he is right there with me whenever I take my sports cars out for a pleasure cruise in the countryside.

Wheels.ca will take a journey back in time and ask our writers to tell us about their first cars and the memories that likely shaped who they are today. We will feature a new story every Thursday. #TBT

We would also love to hear your first car experiences. Share them here kdsouza@wheels.ca and Wheels.ca will publish the best ones.