My Dad worked at a Ford Dealership and he brought home a brand new 1982 Mercury LN7 one night. I fell in love with it then.

Were you excited to get your license?

I got my driver’s license as soon as I turned 16. In 1981 you could walk into the MTO license office and write a test for a “365” learner’s permit that was valid for a year, but you could take the driver’s test the day after if you wanted to. I would have passed the first time if it hadn’t been for those kids throwing snowballs at my speeding car in the school zone.

What was your first car?

My Dad worked at a Ford Dealership and he brought home a brand new 1982 Mercury LN7 one night. I fell in love with it then, and three years later after saving up from jobs after school, he found one at auction and arranged for the wholesaler to sell it to me for $2,500. It had a 1.6 L two-barrel engine with an output of 70hp – maybe that’s why my friends called it the gutless wonder.

The LN7 was the sporty version of the Mercury Lynx which earned spot #34 on the “50 Worst Cars of the 80’s” list, and was a rebadged version of the Ford Escort and Ford EXP. 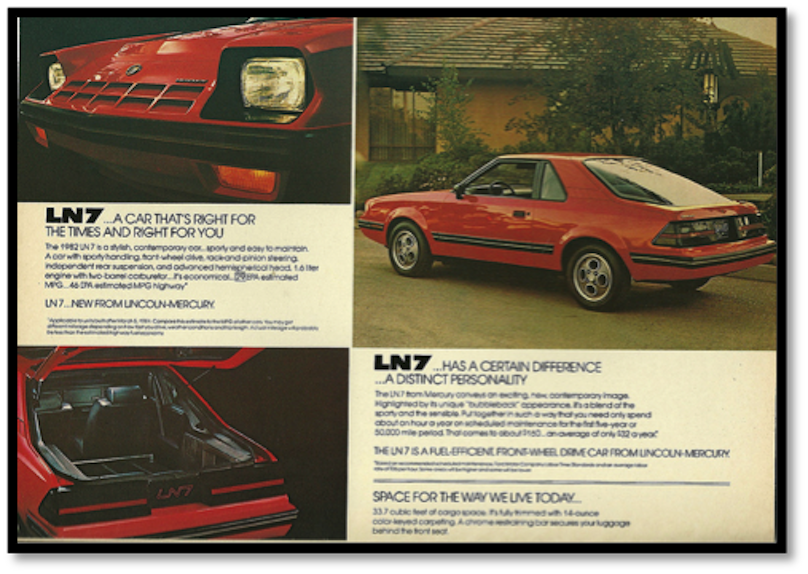 Why did you pick that car?

I had my mind fixated on owning that car ever since my Dad took me for a ride in a brand new one three years before. I thought it was unique; all of my friends were either driving used AMC Gremlins or their Dad’s Buick’s. It had bulbous headlights for eyes, a bubbled hatch window with fantastic rear-view visibility, and it was a 2-seater so I didn’t have to drive hoards of people around. The best part was the colour: Bright Bittersweet (burnt orange) with black trim. For comparison, the LN7 was about as big as a modern-day Hyundai Elantra or Toyota Yaris.

What did you love about it?

What’s not to love about your first car? It spelled freedom and there was no more having to beg to use my parents’ car. That being said, my first car also spelled no more money to spend on Saturdays at the mall. My Father said, “Once you own a car you can say goodbye to your savings account”, and he was right.

What did you hate about it?

When the fall turned to icy cold winter, I realized the car’s heater didn’t work. I had to scrape the ice off the inside of the windshield so I could see out of it to get to work. After nearly freezing to death in mid-December, the mechanic found a cracked head gasket that was likely there when I bought it. Lemon? Yep! But I loved it anyway and kept it for another 2 years.

Niagara Falls had always been the kind of place that felt like a vacation even if it was only 100km from my then Mississauga home. My best friend and I checked in to a cheesy motel the weekend after I bought the car, and then we cruised the loop of the Niagara Parkway and Clifton Hill at least 20 times while we blasted Michael Jackson’s Thriller from my upgraded stereo system that included a cassette deck.

We would also love to hear your first car experiences. Share them here kdsouza@wheels.ca and Wheels.ca will publish the best ones. Links to previous stories below