Multimedia Magic - Where Did All the Buttons Go?

The modern dashboard is built to entertain and look good doing it.

Generally, I embrace the advancement of technology.

I think the innovation we’ve witnessed over the past few decades has, in the main, made our lives much better. You’ll never hear me say I miss dial-up Internet access and brick-sized cell phones.

In saying that, progress hasn’t been perfect.

I’m not suggesting the transformation of the dashboard / centre stack in the modern automobile has been a colossal disaster that needs radical fixing, but it is worth examining because it has become such a high-tech focal point for the manufacturers.

Every car company spends a lot of time these days talking to consumers about its brilliant multimedia systems, the merits of its smartphone integration tech and climate control interfaces, and how beautifully intuitive this stuff is to use.

As someone who writes about cars for a living, I’ve experienced most, if not all, of these systems over the years and from those experiences I have some observations to share.

Now, I’m not going to discuss the merits of the multimedia system in every car, truck, SUV and minivan on the market, but I’ll focus on three from recent reviews that I wrote for Wheels.ca plus my own car, an older model, to provide some context. 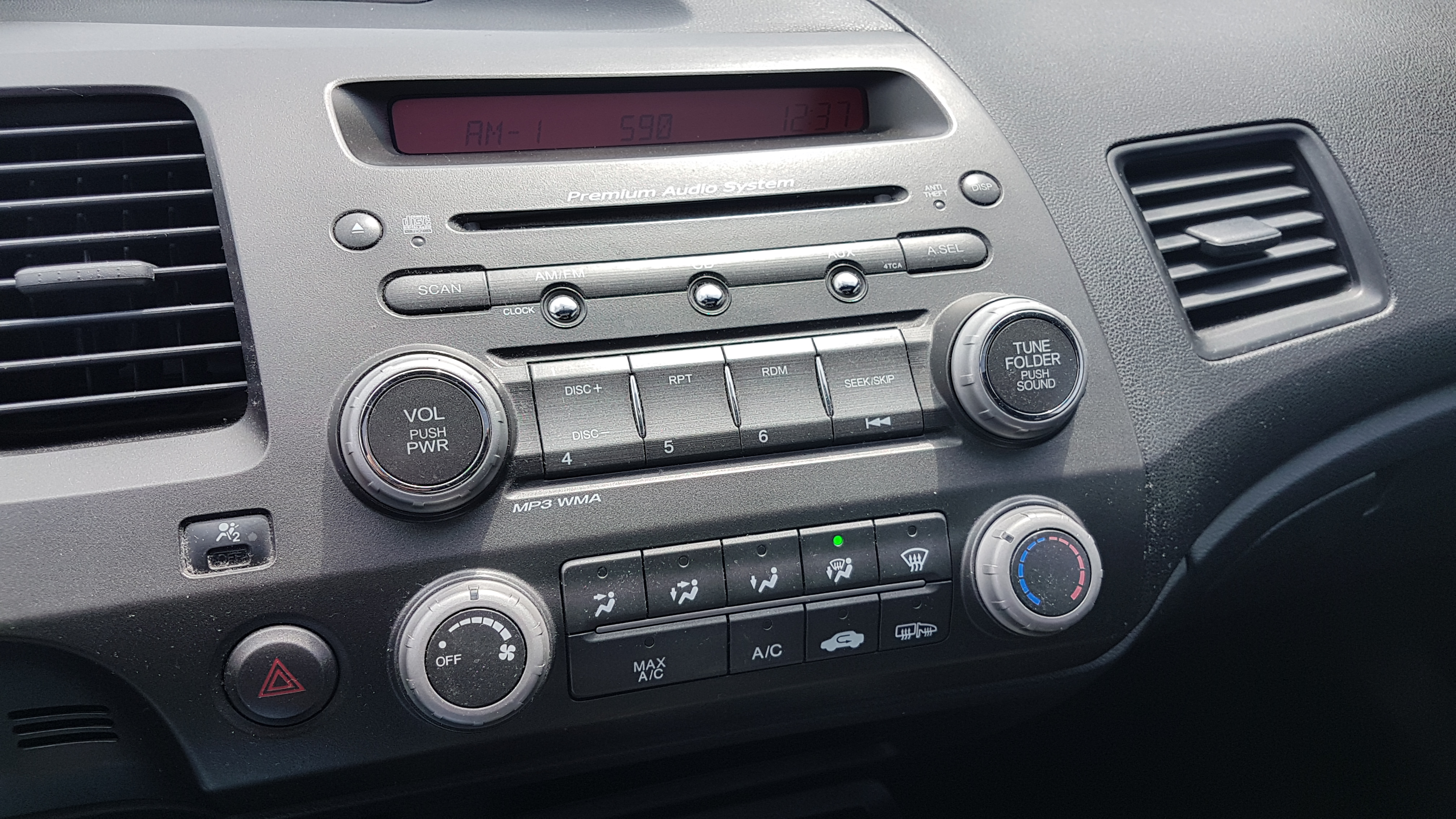 Back in 2010, which might as well have been the Dark Ages of automotive interiors, hard keys and switches were not only plentiful in most cars, they were all you could get.

My current car, a 2010 Honda Civic Si, is a textbook example.

As the photos show, there is a remarkable absence of fancy tech: no navigation touchscreen or dual-zone climate controls, and no cell phone charge tray—heck, this car doesn’t even have heated seats!

It has just one USB port – attached to a cable! – located in the centre console storage bin, and its smartphone integration (if you can call it that) is limited to the iPhone. If you want to play music from your Android device (like mine, for example), you’re out of luck. And hands-free Bluetooth? Forget it – this is a 2010 car. That stuff is pure science fiction.

What this car is lacking in shiny tech that we commonly take for granted in 2018, however, is a no-nonsense dash layout that anyone can use.

The Civic’s buttons and switches are unambiguous – turn the knob, push the button, insert the disc, and so on. It doesn’t get much easier than that.

They’re so easy to use in fact, that soon after driving this car, one can easily adjust the climate controls without averting their attention from the road. Remembering where buttons and switches are located is not only possible, it happens almost without thinking. I rarely look away to adjust anything in this car and I love that.

I’ve owned this car since 2014, and while I didn’t buy it because of its interior, it is one of its most appealing virtues. Everything just works.

But I wish it had heated seats. And navigation. That’d be nice. 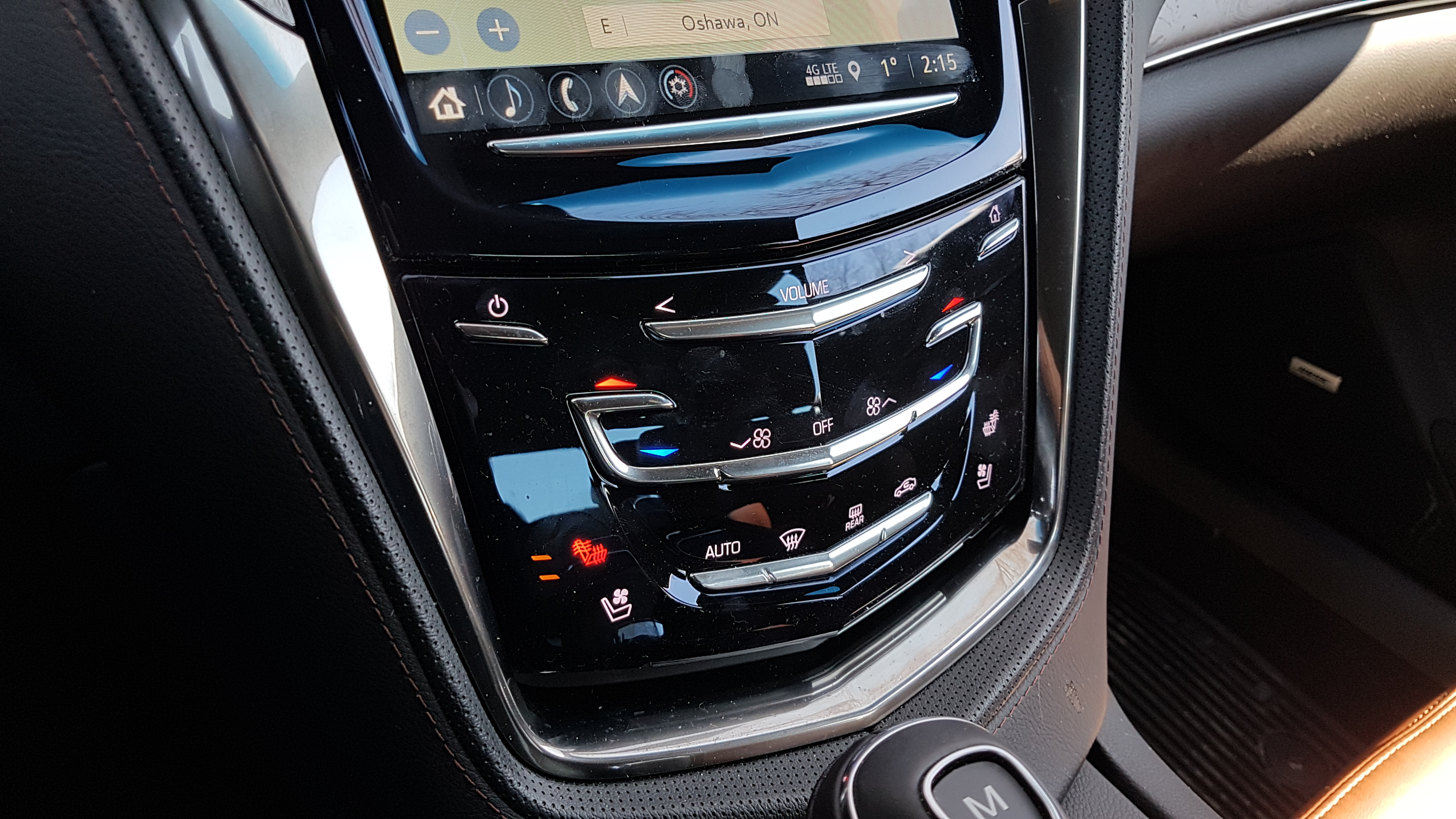 All current Cadillacs, such as the 2018 CTS I recently drove, have a multimedia system – known as the Cadillac User Experience, CUE for short –  that can take a bit of getting used to.

To say that it’s worlds apart from cars like my 2010 Civic is a colossal understatement.

In terms of the layout, the focal point is an 8-inch touchscreen that governs much of the settings for things like climate, smartphone integration, hands-free calling and the like.

And hard keys? Well, there really aren’t any. At least not in the traditional sense. The buttons located below the screen in the CTS operate by giving off what’s known as haptic feedback when they’re pressed, like a smartphone does when an app is engaged.

Basically, they don’t have an engaged or disengaged setting, like traditional buttons. There’s no on or off – these keys work by being tapped, again, like a smartphone or tablet.

My issues with this design choice is twofold. One, the feedback some of these buttons produce makes adjusting them with precision difficult. Secondly, because these buttons aren’t mechanical, per se, it can be hard to adjust them without becoming distracted – not a good thing when the car is moving.

And forget adjusting them while wearing winter gloves – I’ve tried.

Everything works, but I think the system could best be summarized as a triumph of aesthetics over practicality, especially when the digital instrument cluster is taken into account. 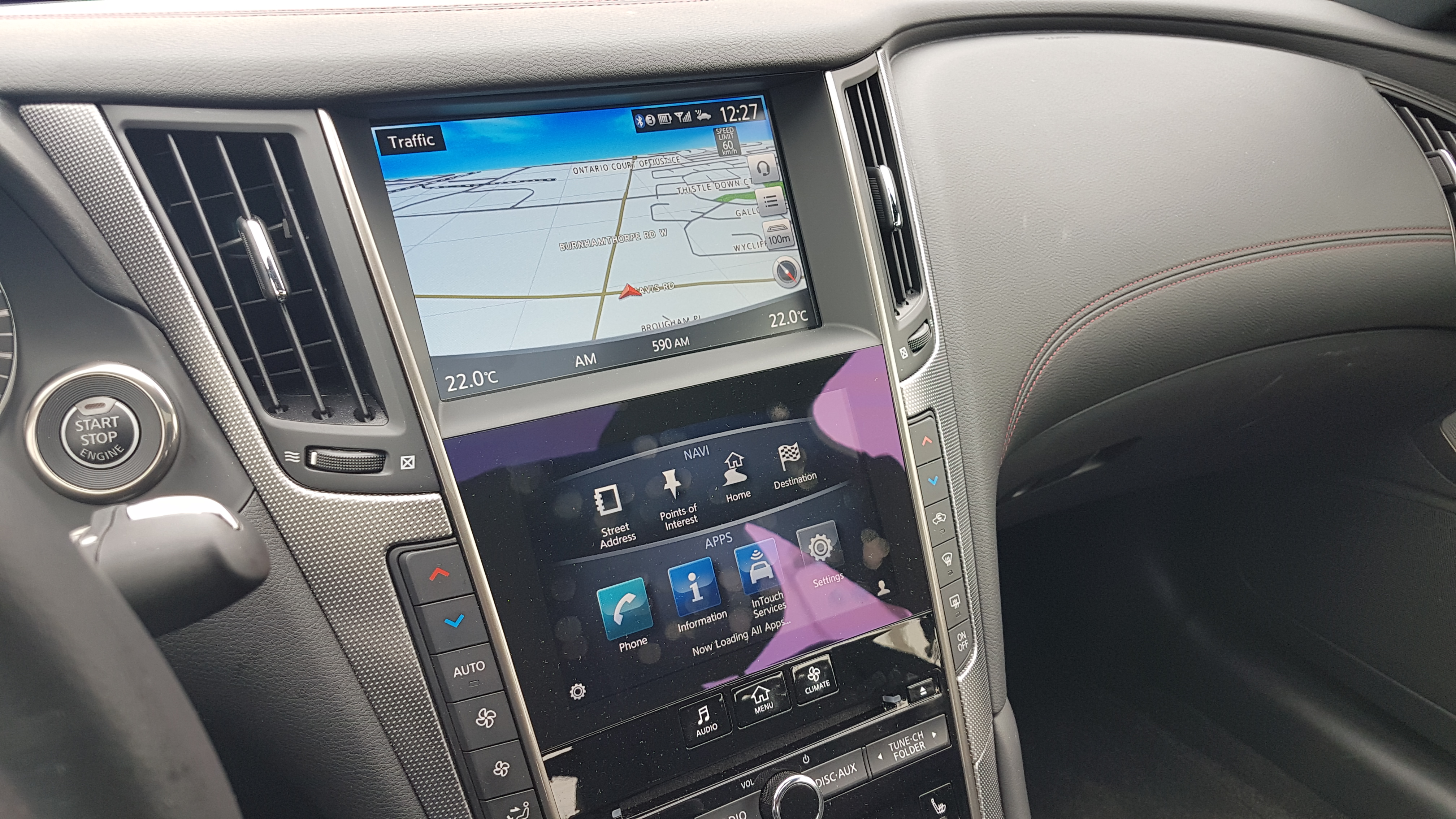 I really like the Infiniti Q50. I liked it the first time I drove it in 2013, and that feeling has grown as I’ve driven it in the years since.

I spent time behind the wheel of a 2018 Red Sport 400 model recently and couldn’t find much I didn’t like.

Except the layout of its centre stack – I’m not in love with that.

Firstly, two screens are one too many for me.

Similar to the CTS, I think the motivating factor behind the Q50’s multimedia system is appearance. Let’s face it, a bunch of buttons don’t look as pretty as two touchscreens. The problem is they’re not as easy to use.

The 8-inch top screen – which has graphics that look pretty old in 2018 – displays the navigation map, while the bottom 7-incher is for climate controls, smartphone pairing and various apps.

The one saving grace for this system – and a design choice that I really like – are the redundant climate control buttons along the sides of the bottom touchscreen. Same goes for the volume knob and the seek / scan buttons for the radio.

Again, like the buttons in my Civic, you know how they work simply by looking at them. It doesn’t get much easier than that. 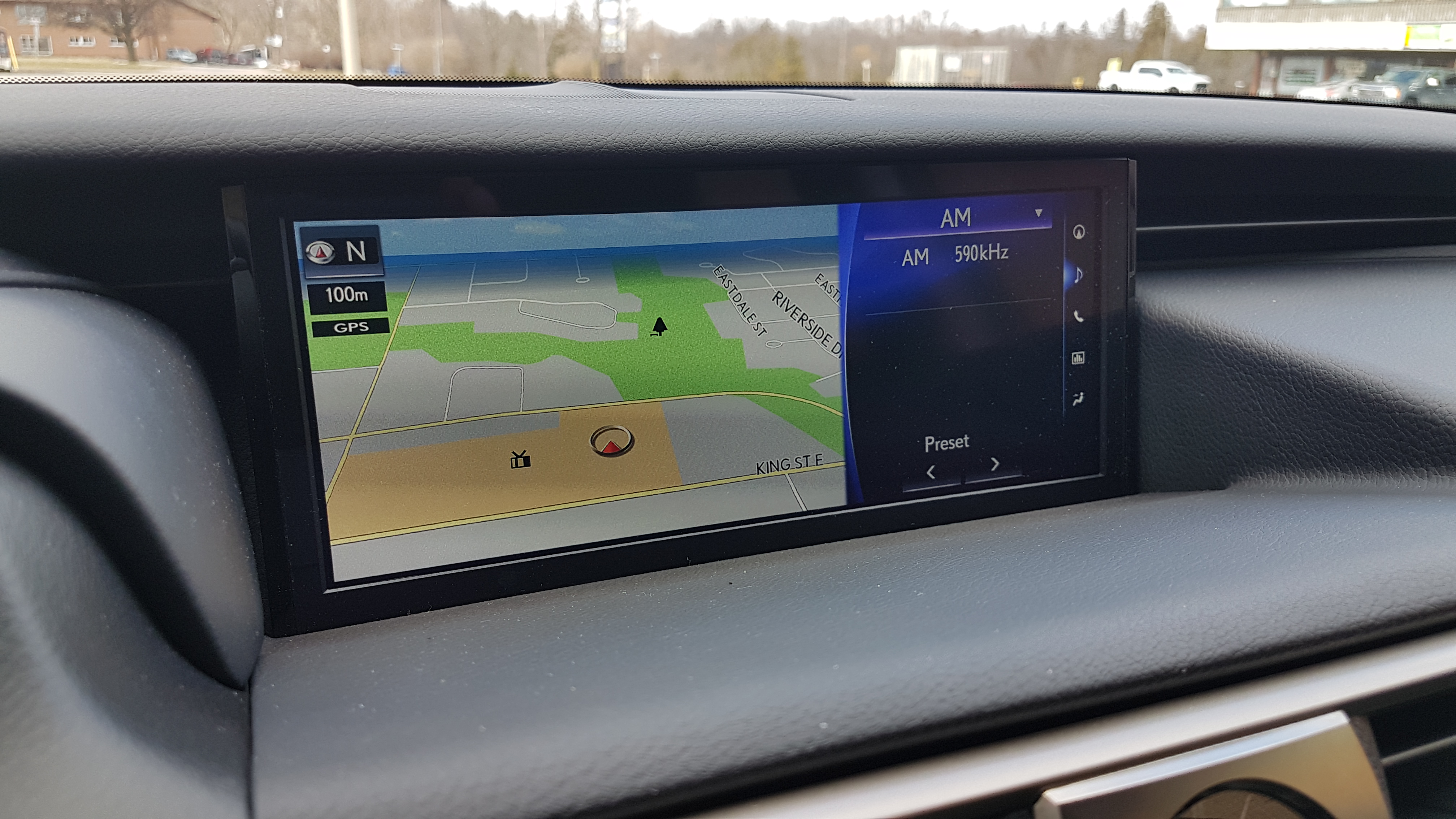 Although the CTS and Q50 are very much in keeping with a shift in the industry towards slicker multimedia systems that are designed as much to entertain as inform, not all cars have gone down that road.

It has a big 10.3-inch multimedia screen, yes, but it’s not a touchscreen. Instead, it works in conjunction with a touch controller (similar to a computer mouse), a set-up that can be a bit tricky to use, but at least offers some tactile feedback with its supporting hard keys for functions like map and menu.

Below the screen is a panel of buttons and knobs that govern climate controls and radio functions. Additional buttons are located on the centre console for the heated / cooled seats and heated steering wheel.

All of these are easy to use and can be adjusted with minimal distraction. Does this layout look as nice as the setup in the CTS and Q50? Perhaps not, but I’d argue the IS 350’s interior is far from ugly. And it’s the most intuitive system overall among the three. You’ll never have to refer to the owner’s manual in this car, for this system at least.

Buttons, knobs and switches haven’t disappeared. There are still plenty of vehicles that have them, but with a proliferation of cameras and screens filtering down into smaller cars, SUVs and trucks, there are fewer than just a decade ago.

Generally, non-luxury brands (Chevrolet, Ford, Honda, etc.) have fewer frills in their multimedia systems than their luxury counterparts, like the ones I’ve mentioned. In the end, however, it really depends on the make, model and trim level. Toyotas have lots of slick tech these days, too.

Some of these systems are bound to annoy and frustrate, but I think it’s incumbent upon us to adjust to them – the march forward doesn’t relent.

And if we don’t feel like adjusting, there are always old cars.