We’re here at the 4x4 Center in rural Vermont to test the latest mud tire from BFGoodrich.

“There’s no way I’m getting out of this,” I thought, staring up a seemingly vertical embankment covered in mud that was – to twist a Biggie lyric – slicker than your average. Feathering the Wrangler’s throttle, and listening to the ministrations of the expert off-roader in the passenger seat while apocalyptic amounts of rain poured from the sky, all four BFGoodrich KM3 mud tires chewed up the mud and spit it out faster than a kid spits out broccoli.

Turns out, I needn’t have worried.

BFGoodrich knows a thing or two about making a mud tire, releasing their first mud-terrain rubber way back when the Rubik’s Cube was new and Mount St. Helens was spewing ash all over the west coast. Since 1980, the company has continuously refined its mud tire, going through several iterations on its way to the new KM3 that’s eating its way through the quagmire underneath the Jeep at my command.

We’re here at the 4×4 Center in rural Vermont to test the latest mud tire from BFGoodrich, the new KM3. More than a bunch of people who like heading into the woods to teach others how to drive on slick trails, these gearheads own and operate a 6000 square foot shop that specializes in building off-road beasts, particularly Land Rovers. Their self-made warren of paths and passages wend through the dense Vermont forest. 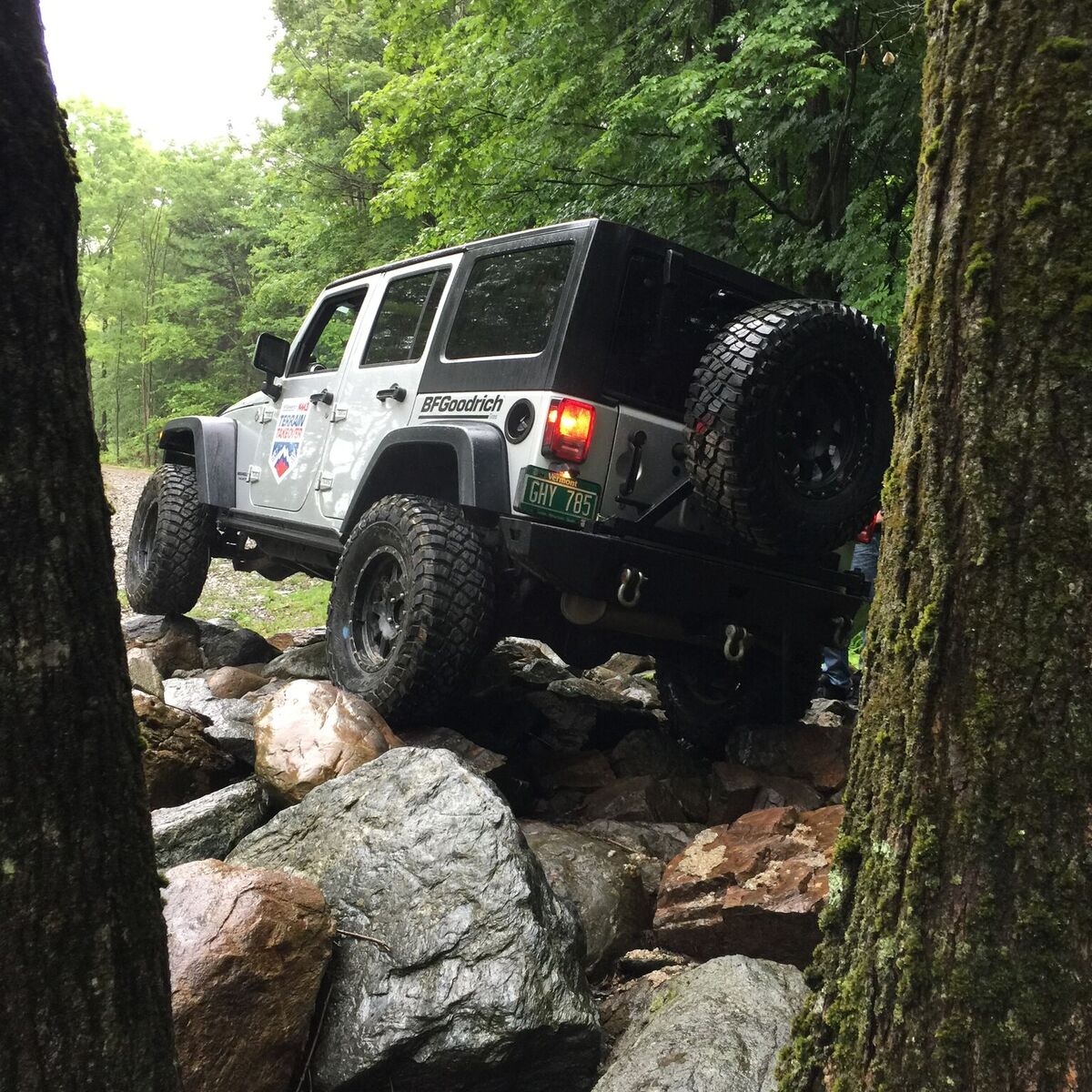 It’s important to know that a tire’s characteristics are made up of two distinct puzzle parts: its physical features and its chemical composition. BFG spent the better part of two years developing this tire, employing the experts at Vermont’s 4×4 Center to tell them what works and what doesn’t.

Physical features of a tire involve items like tread blocks. When developing the KM3, BFG engineers made the decision to stagger the tire’s tread blocks in a near diagonal pattern, allowing the tire to grip the ground from just about any angle of approach. The spaces between those tread blocks is called the ‘linear flex zone’, allowing the tire to deform and envelop objects in aired-down situations. BFG’s lowest recommended air pressure without beadlocked wheels is about 15psi.

Eagle-eyed shoppers will spy more than just empty space between those tread blocks. This is where the KM3 separates itself from its mundane brethren. Small triangular-shaped nubs are designed to flick rocks out of the tread, a lesson learned with the company’s KO2 tire. However, as the KM3 is designed to take on muddy environs, the BFG boffins added two more tricks.

Those aggressive treads seem to spill out over the shoulder of the tire and onto the sidewall; not only do they look great, they are designed to deflect debris and prevent a tear or puncture, contributing to a 27% tougher sidewall than their old tire. In between those treads are what BFG calls “Mud-Phobic” bars, slim lines of rubber that stand slightly higher than their surroundings. 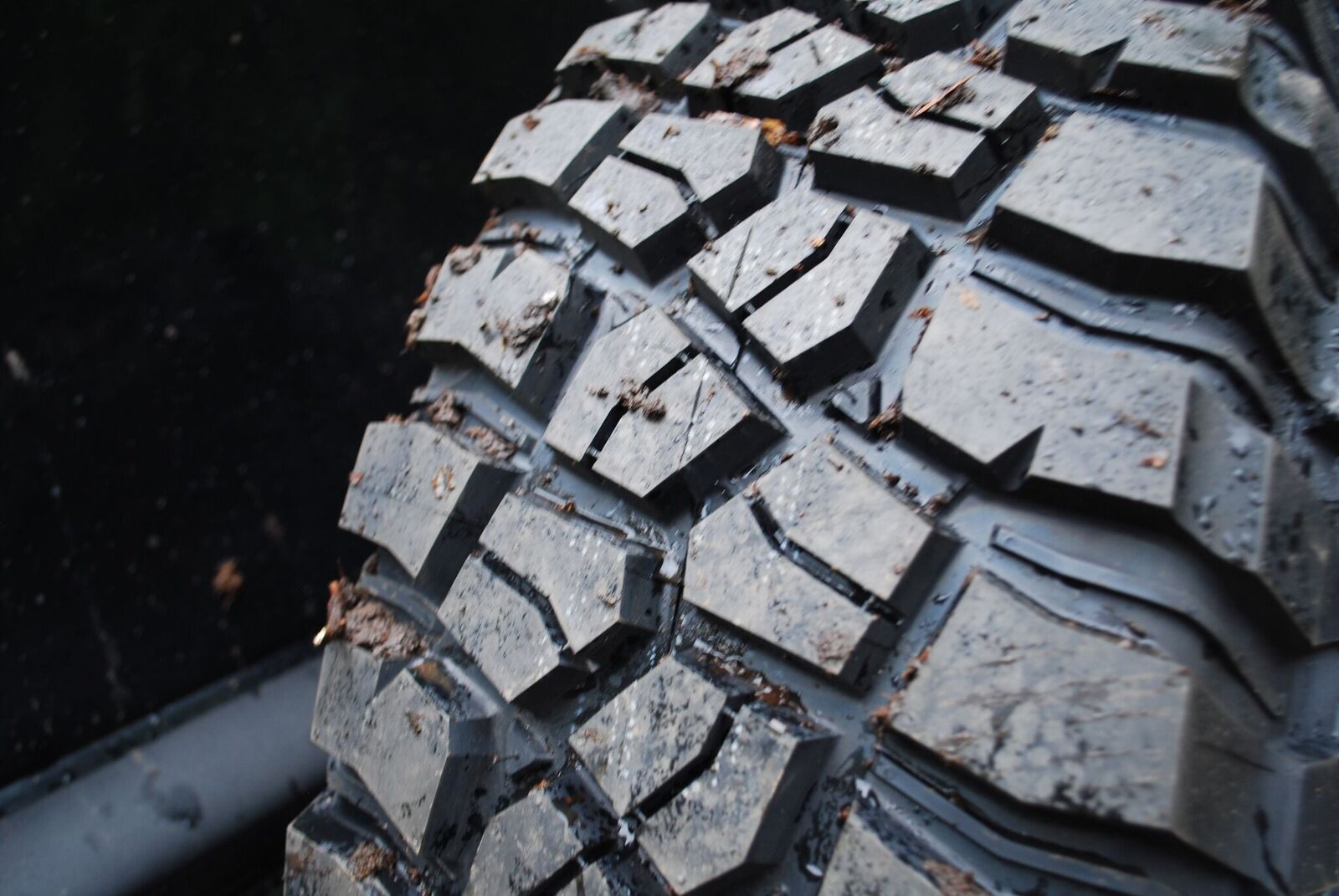 Off-roading in the mud often packs those areas full of gunk, creating a surface that renders a tire smoother than a party balloon and unable to deploy all its gripping surface. These bars are designed to flex like a weightlifter, breaking the vacuum that’s holding the mud, flinging it outward and away from the tire. Thanks to this gee-whiz technology, BFG claims 5% better mud traction compared to its old KM2.

Chemical compounds, on the other hand, cannot be seen but play an equally important role in the making of a competent tire. Without giving away their secret sauce, BFG says its advanced soup of rubber elements enhances grip on rocks and slick surfaces.

It’s also a good looking tire, this. Make no mistake; there are folks who buy these and similar tires simply for their looks, never to turn a wheel in anger on surfaces rougher than the mall’s back lot. In fact, BFG estimates very nearly 40 percent—that’s two out of every five buyers – in the market for a tire like the KM3 buy it simply for the aesthetic purposes.

Leaving aside my opinions of those types of people for a moment, this helps explain why the KM3 is now available in no fewer than 59 sizes, nearly half of which are new compared to the old KM2 tire. Brodozers are usually equipped with 18-inch or 20-inch wheels, so BFGoodrich has sensibly decided to cater to this market. No sense in leaving cash on the table, after all.

Driving to the trailhead, we sampled the KM3 on public paved roads, a sensible test since most people will be driving on asphalt at some point, even if only on their way to bust some off-road moves. In an F-Series Super Duty shod with factory-sized 18s, road noise was acceptably muted especially when compared to the loud hum one normally associates with aggressive mud rubber. The tires also exhibited notably less squirm than, say, a winter tire. 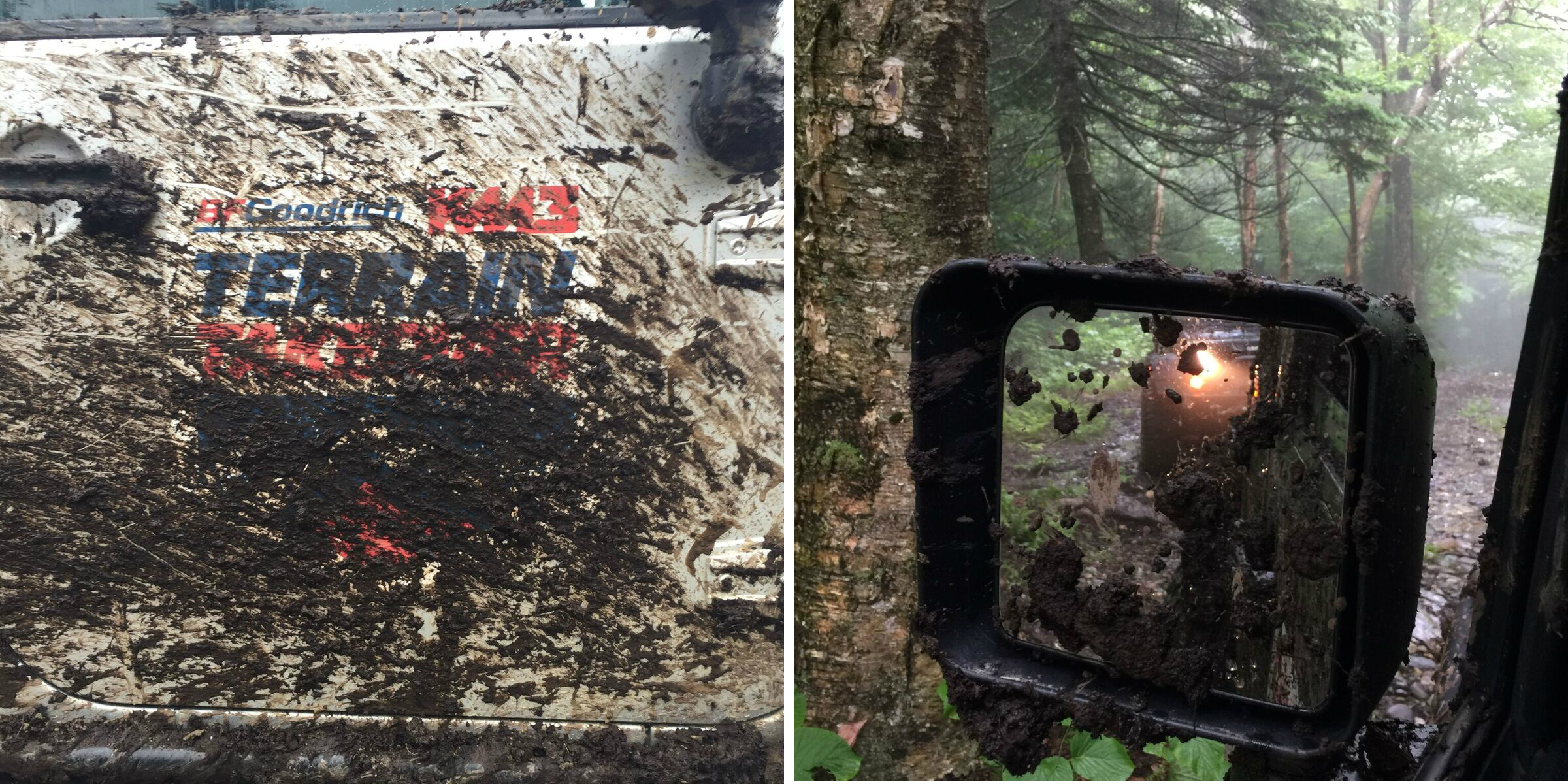 At the 4×4 Center, after a suitable amount of classroom and practical instruction, we jumped aboard V6-powered Jeep Wranglers equipped with a 3-inch lift and 35×12.5R17 KM3 tires. Despite their stance, this is actually one of the smallest 17-inch KM3s offered.

The rain was biblical, setting a good stage for ‘wheeling in the mud’.

Surrounded by ferns, fog, and tall trees, the Jurassic Park vibe was unmistakable. I half expected Jeff Goldblum to appear, shirtless and warning of a T-Rex headed our way.

Imbued with front and rear lockers, the Jeep and its KM3s scampered up and over the obstacles thrown at it, from deep mudholes to long and slick uphill stretches. From inside the Jeep, it was easy to see the KM3 tires flinging mud skyward and easy to feel all four corners digging in as the mud-terrains found traction. Your author is not an off-road pro by any stretch, yet plowing through these tough conditions required little more than an appropriate level of loud pedal and a basic understanding of gravity.

Resting at the summit, picking mud from my teeth and grinning, I watched other drivers make their way up the sluice. From this vantage, it was easy to see the KM3 evacuate mud from between its tread blocks thanks to those Mud-Phobic bars, sending dirt skyward in quantities sufficient to fill the hygiene needs of at least six Persian cats. If a clean(ish) tire is a happy tire, then the BFGoodrich KM3 is a very happy tire indeed.

As will be the customers who buy them, if the rictus grins on all our faces (journos and pros alike) were any indication.

The BFGoodrich KM3 tire, in all 59 sizes, is on sale now. 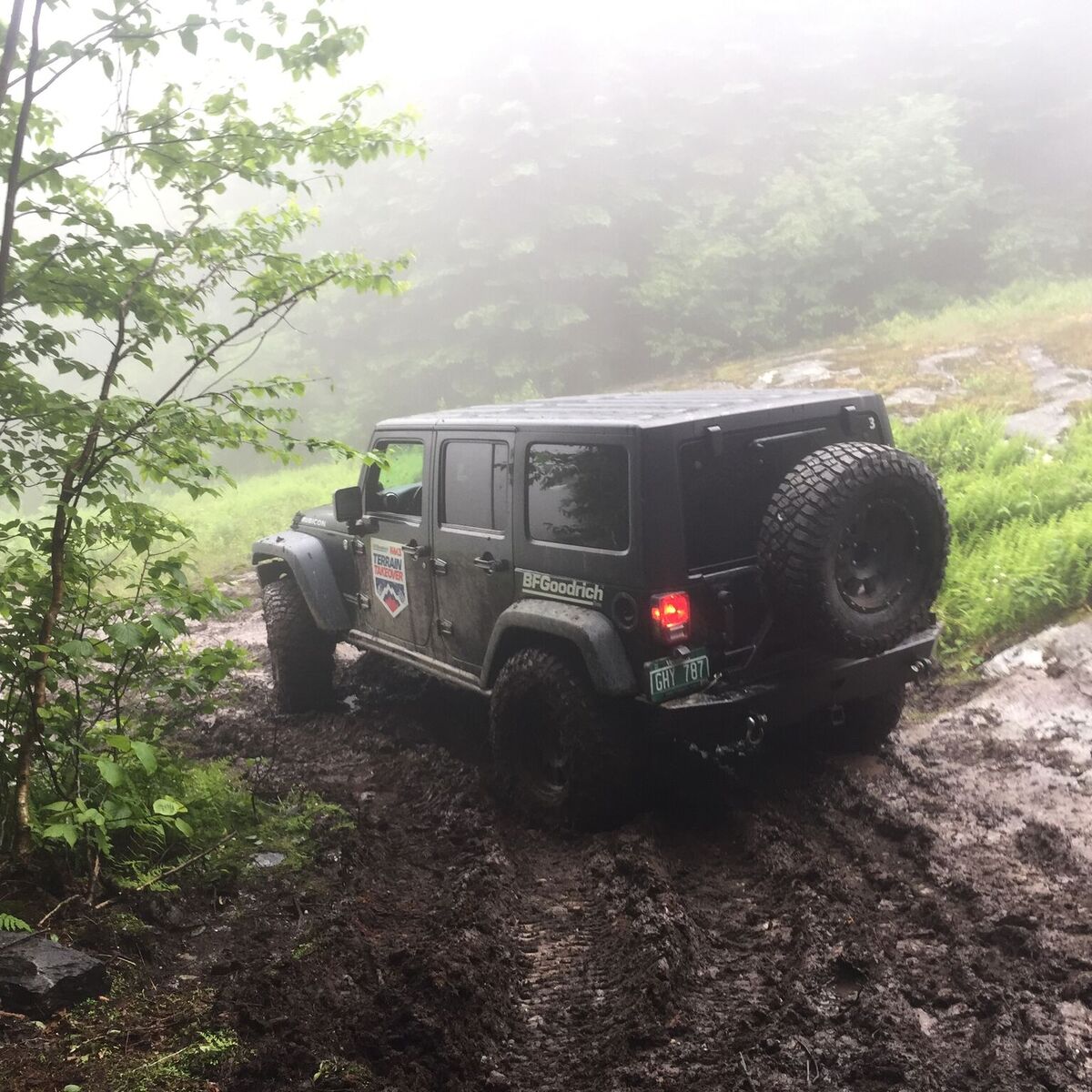 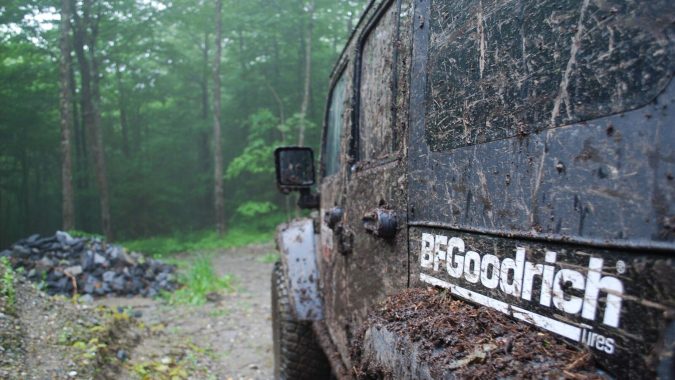 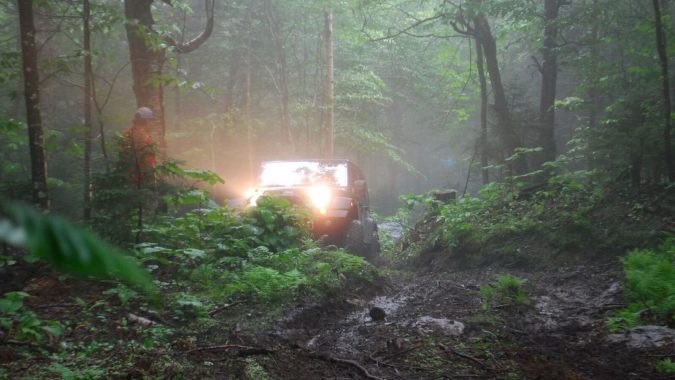 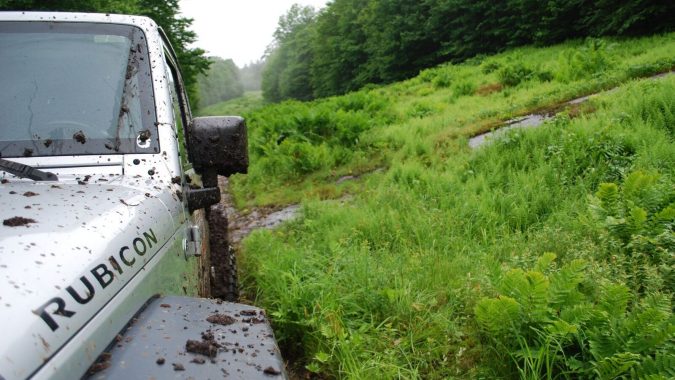 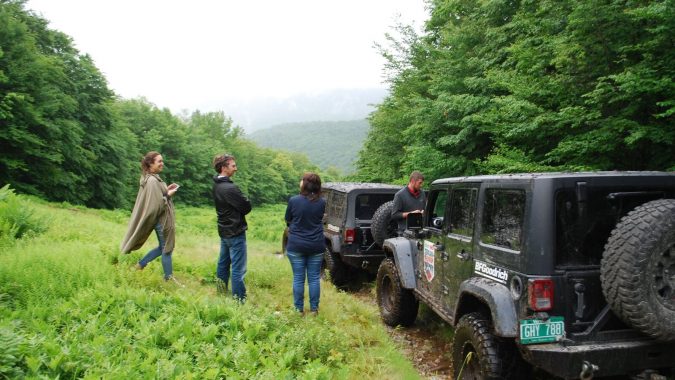 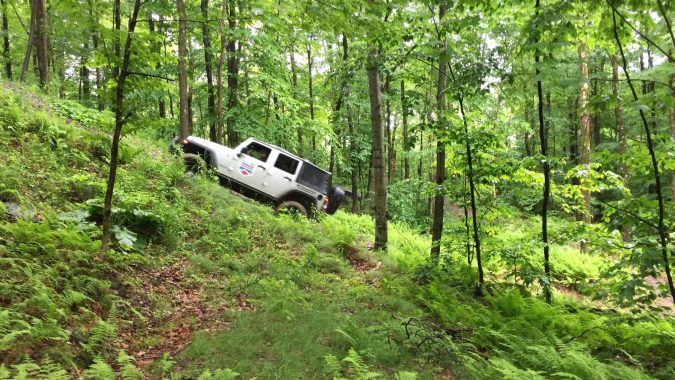