It was a warm and sunny mid-May day when I had the opportunity to do that very thing. Although the entire process took less than five minutes, I learned just how many challenges NASCAR drivers are faced with every time they strap in.

The first was evident before the ride even started. Sprint Cup cars don?t have doors, so I had to get in the same way the drivers do: through the window.

Those openings are not as big as they seem. Working your way in, especially wearing a helmet and HANS Device, takes a lot more precision and contortion than the pros make it look like.

Once through, I wedged myself into the passenger seat and had the heavy-duty, five-point harness fastened securely around me. Edwards politely introduced himself (as though I didn’t know who he was) and made small talk until he was given the signal to fire the engine.

On his first try, it wouldn’t turn over.

‘I think I flooded it,’he said. (Must have been one of the previous-generation carbureted engines.)

Finally, after the fifth attempt, over it went, and the 800-plus horses from the 5.9-L V8 under the hood of the No. 99 Ford Fusion came to life with an incredible, almighty roar.

Edwards locked his eyes with mine in the rear-view mirror. ‘If you start to get worried part way through,’ he said ‘pausing dramatically with a glint in his eye that’s your problem.

Before I knew whether to laugh or scream, I was slammed backward into my seat as he took off down pit road.

When entering Turn 1, Charlotte’s 24-degree banking is the first thing you notice. It feels a bit like approaching a giant asphalt wall.

And once you?re climbing it, an assault on the senses begins. Bits of rubber flew into my face. My eardrums rattled so hard, they were in physical pain. The pull of the G-forces strained my entire body ? especially my neck, until I remembered it would be easier to use the headrests for support than to hold my head up on my own.

I felt like I had hardly blinked before the first lap was over. Edwards checked on me by offering a thumbs-up. I gave him one back. (At least, I think I did. That part is kind of a blur.)

For the second time around, he chose the high line. Although my ears had been in pain on the first lap, running mere inches from the wall and having the engine noise bounced back at us convinced me my ears would be bleeding by the time I took my helmet off.

Then it dawned on me: we were running mere inches from the wall! One tiny miscue could have spelled disaster, and the car felt far from stable underneath us.

But Edwards may as well have been out for a scenic Sunday drive for all it seemed to faze him. He could have been whistling and twiddling his thumbs and it wouldn?t have seemed out of place.

On our short drive, he was running roughly three to four seconds slower than a typical race lap ? about 270 km/h as opposed to 310. And he was on the track alone without 42 other cars dropping rubber, creating turbulence, and jockeying for position.

He also didn?t need to concern himself with monitoring the gauges on the dash, estimating fuel range, or going through pit stops.

Talk about putting the enormity of a Cup driver?s job into perspective.

Edwards glanced at me through the rear-view mirror again as we pulled back onto pit road. From the look in his eyes, I could tell he had a cheeky smile on his face. ?How was it?? I barely heard him ask.

Through my spinning head, ringing ears, pounding heart and enormous grin, I blurted out something to the effect of, ?Freaking awesome!?

He patted me twice on the leg and thanked me for coming along for the ride.

No, Carl. Thank you for reminding me how much goes into letting people think your job is easy.

The NASCAR Sprint Cup Coca-Cola 600 at Charlotte Motor Speedway is Sunday, May 25. Coverage begins at 5:30 p.m. on TSN.

Transportation for freelance writer Stephanie Wallcraft was provided by the manufacturer. Email: wheels@thestar.ca. 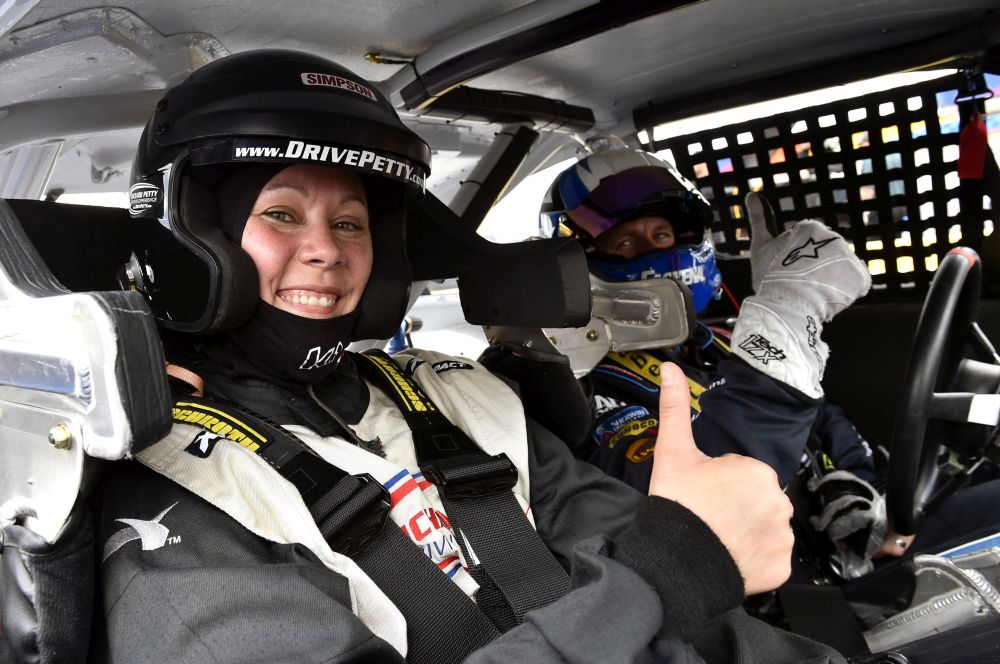