Reigning F1 champ, who helped develop Infiniti Q50 as director of performance, takes it for a spin at Mosport

For years, Formula One racing teams were identified by their chassis manufacturer and their engine partner: Lotus-Ford, Williams-Renault, McLaren-Honda. Some companies produced both — Ferrari being the most famous. But two names were often the norm.

Nowadays, that method of identification may be on the way out. A bold experiment by Infiniti Motor Co. Ltd., in which it has joined Red Bull Racing as title partner and vehicle performance partner, thus becoming Infiniti Red Bull Racing, has the potential to trigger similar arrangements in Grand Prix racing that could benefit the sport as well as the automobile manufacturing industry.

Just don’t use the words “naming rights” or “sponsor.”

“We share innovation, technologies, and research and development in the pursuit of precision and performance.” 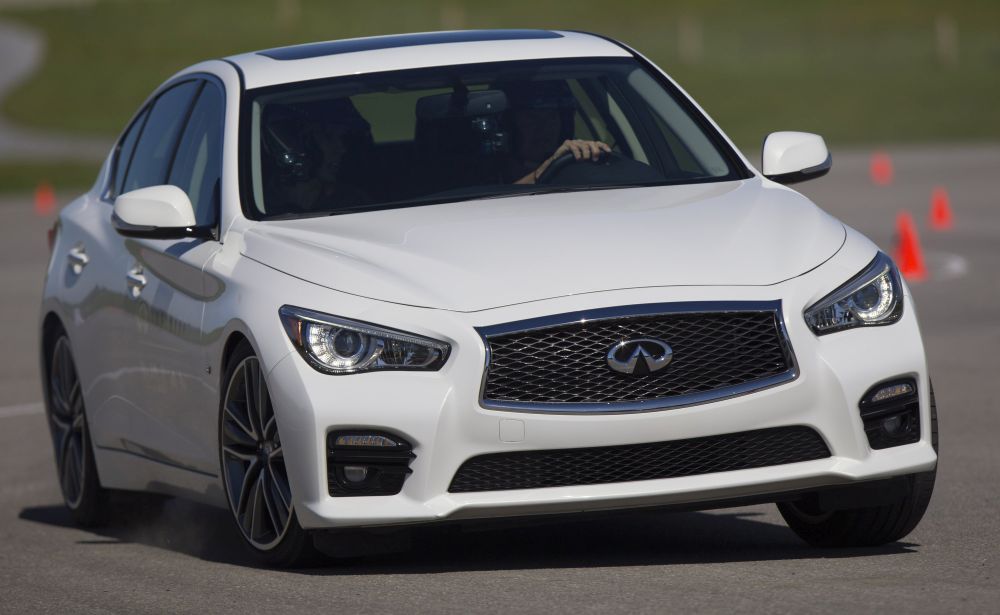 An example of this co-operation, started in 2011, is the Infiniti Q50 sports sedan that was developed, in part, by Vettel, who’s the brand’s director of performance. The car was front and centre at the racing circuit Wednesday.

The 26-year-old driver, who won last year’s Grand Prix du Canada at Circuit-Gilles Villeneuve in Montreal and will defend his championship there tomorrow, went ripping around Old Mosport in the Q50 with reporters and special guests strapped in beside him — all holding on for dear life.

The Q50 moves like a leopard anyway, but with the world champion at the wheel, it was like surfing a hurricane.

“When you have the world’s top driver providing real input into the performance of your cars, you know the final product will be something fun to drive,” said Stephen McDonnell, Infiniti Canada’s managing director. 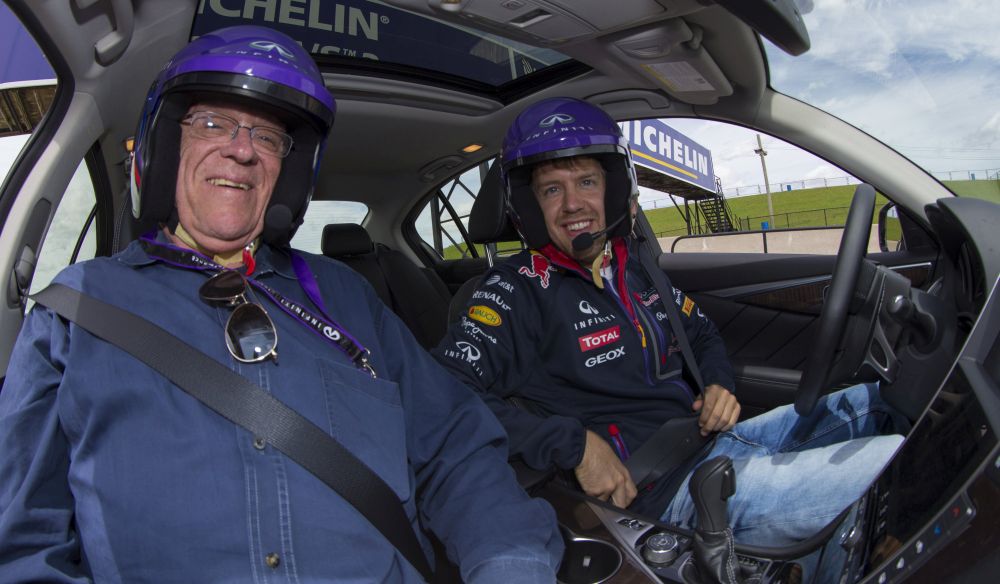 But just how involved is Vettel? The champion didn’t hesitate in answering: lots.

“But it’s a long process,” he said. “If I ask for a change in my Formula One car, it gets done immediately. The development of a road car from scratch takes a very long time.”

But he’s enjoying the challenge and looking forward to his continuing involvement.

“If you look at the Q50, for example, we were able to test the car and to give feedback about what needed to be improved,” he said. 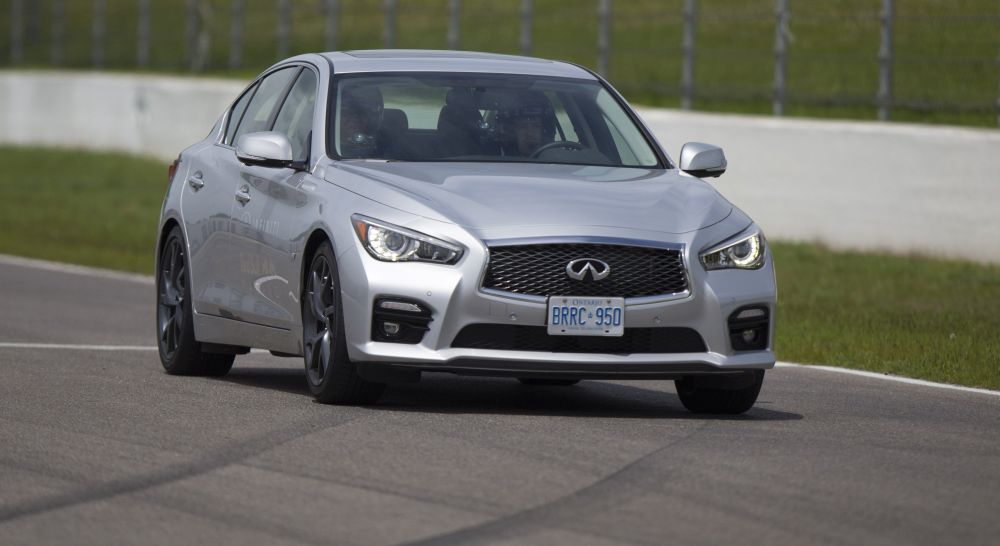 “When I first drove the car in Japan a couple of years back, it was mostly feedback about the handling, especially about the steering — the steer-by-wire system. It’s obviously a new approach. It needed a lot of trimming, so I wasn’t very happy in the beginning with how the car handled.

“Basically, the steering gives you the ability to feel the car, to feel whether it gives you the response you ask for, if it feels natural to you compared to the cars you’ve driven before,” Vettel explained.

“We had to improve it a lot, as well as the brake pedal. We’re trying something new. In terms of stiffness, it was playing a little bit funny so I wasn’t very happy with that. All these things we improved. 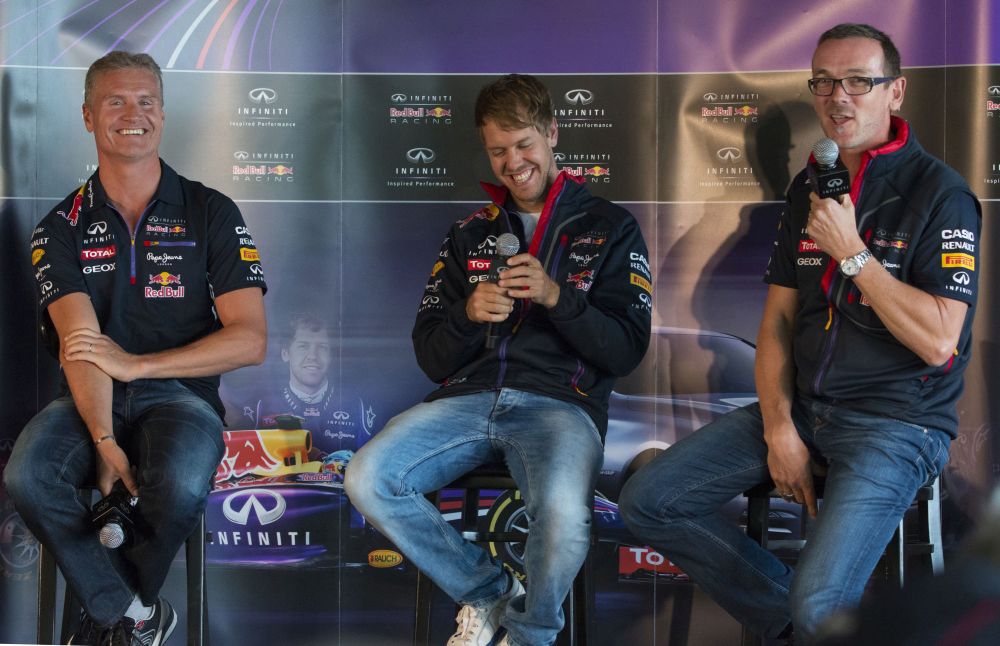 “In terms of positioning the seat, it might sound a little bit detailed, but it makes a big difference the way you sit in the car, the way the seat gives you support in the corners. So, all in all, it’s important to feel in control. When you feel more comfortable, I think you also travel safer.”

Words like those tell Sigl that the race team-Infiniti partnership is on the right track. But it works both ways. The door is also open for Red Bull to take advantage of what Infiniti has to offer — and that, frankly, can be amazing.

“If you look at Red Bull Racing,” he said, “it’s an independent team in a mid-size kind of factory in the U.K., in a building smaller in size than an Ikea warehouse. That’s it. And they’re doing a great job, winning the last four championships.

“But for them, mid-term thinking means, ‘What do we do three races from now?’ If you look at the Nissan Motor Corp. (Infiniti’s parent), we’re thinking about transportation 10, 15 years from now.

“We have facilities around the world; we have 19,000 engineers. I’m not saying the team will use all of them but we said to (Red Bull chief designer) Adrian Newey, ‘If there’s anything that we can do, we’d be happy to help.’

“I think that’s what’s got the race team excited because they didn’t have that deep a tool box before.”

Coulthard, one of the most articulate F1 drivers of his time, entertained reporters and guests by letting them take him for a ride in a Q50 around an autocross course. And then he showed them how it should really be done.

He picked up on the race-team/manufacture partnership theme during a lunch-hour round-table.

“You almost have two opposing views,” he said. “Formula One has always been a proving ground for the manufacturers but all the drivers care about is performance. They are not thinking of the significance of the road car of the future, they are thinking about the next corner.

“But if you look from last year to this year, the cars are all restricted to 100 kilograms of fuel. That’s 30-per-cent less fuel than they had in the past. That’s good for the manufacturers. But that also involves a lot more (fuel) management on the part of the drivers.

“As challenging as that is today, the fact that they’ve been able to package it into a Grand Prix car will undoubtedly make a difference in the road cars of the future.”

Although much of the focus Wednesday was on the Q50 and Infiniti’s relationship with the racing team (and, let’s face it, car sales), the underlying reason for everybody being there, including the company executives, was Sebastien Vettel and his performance in the 2014 season.

After six races, Vettel is sixth in the world championship with 45 points, seven behind his first-year teammate Daniel Ricciardo, who is in fourth place with 54 points (which Vettel thinks is wonderful: “He’s worked hard to get there.”) Nico Rosberg, who drives for Mercedes, is leading the championship with 122 points.

The young world champion suggested the change in technology has been a problem for his team.

“This year has seen a revolution in the power unit,” he said. (There are no longer “engines” or “motors” in Formula One; they are hybrid “power units”).

“We have more electric energy, more boost from the batteries. There are some very interesting technologies but they are very complicated at the same time. The cars have gotten a lot more complex. Since we are still very early in their development, there is a chance for problems, in terms of reliability and mistakes, and we had a lot of those this year.

“In terms of development, we were quite a long way back at the first of the year. But where we are now, probably right behind Mercedes, it’s been a big step. But the gap is still too big, so we have to close it and get back to the level of performance we were at in the last couple of years.”

All among the F1 contingent appeared surprised to hear that the Canadian Grand Prix is in the last year of its contract. As of mid-week, no contract had been signed to continue the GP past this weekend.

And all the more ironic is the fact that Infiniti selected Mosport — the site of the very first Canadian Grand Prix in 1967 — to showcase its relationship with Red Bull.

Sigl said everyone in Grand Prix adores the “Four M” races — Melbourne, Monza, Monaco and Montreal. “It would be a blow to the sport if Canada was not on the calendar,” he said.

“It’s not just about Montreal,” he said. “I think North America generally gets behind the Grand Prix here. There’s a natural fit — a good history of success with Canadian drivers going to Europe and there’s a good connection between Europe and Canada generally.

“It’s slipped off the calendar a couple of times (1975, 1987 and 2009) but it’s always come back because the commercial rights holder recognizes the importance of Canada. The promoters realize it’s a big stimulus for the local economy, as well. The race is on the world stage. It’s your best calling card, really, to advertise the city and the country.”

For his part, Vettel — who took a side trip to Niagara Falls on Tuesday evening — was simply taken aback.

“I wasn’t aware,” he said. “It would be a massive, massive loss, because it is such a great event. The drivers love coming here — and I think it’s always been like this. You feel welcome. Montreal goes crazy. It’s very noisy, there are a lot of parties and, yeah, it would be a real shame.” 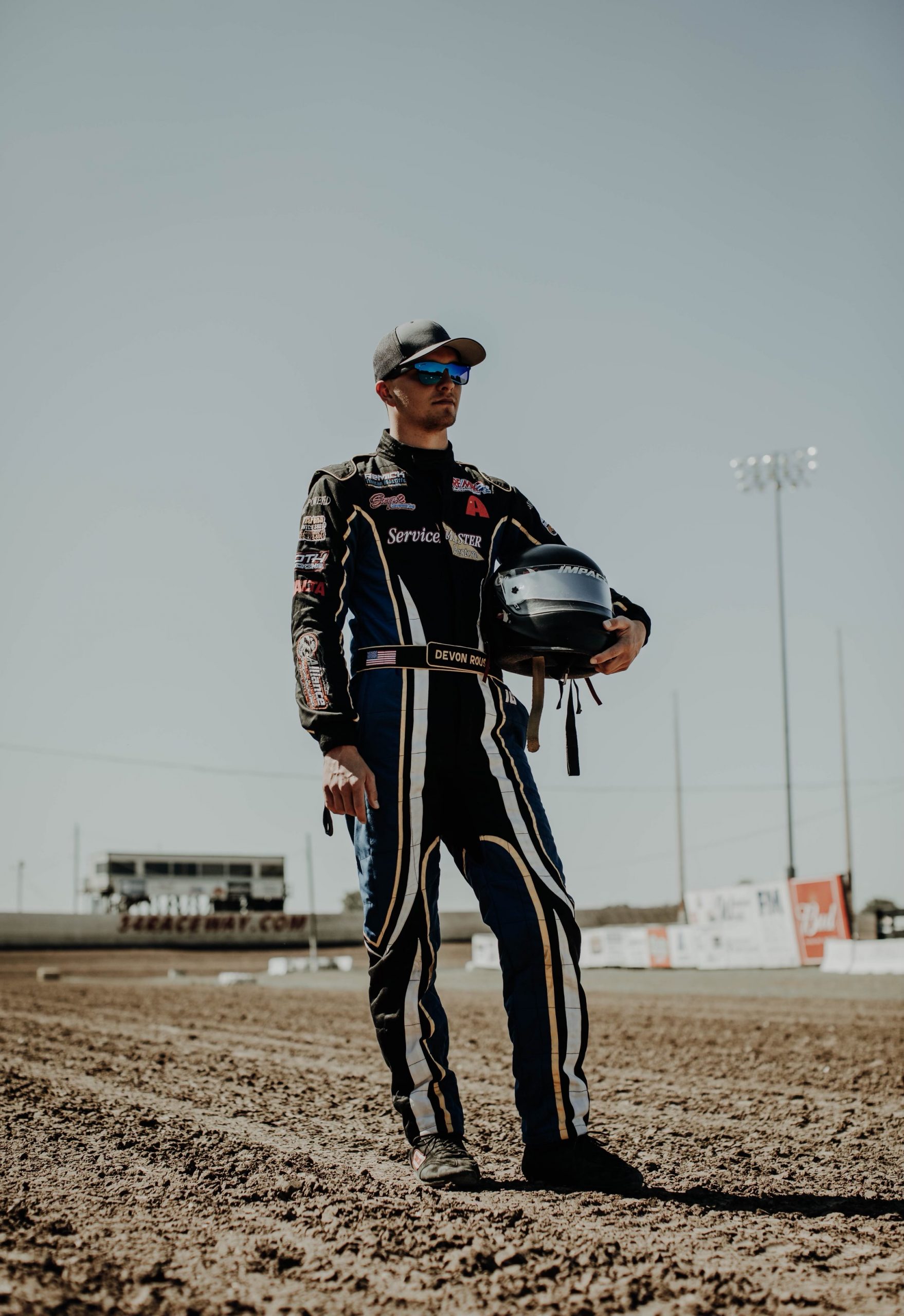