A Look Back at Seven Generations of Corvette

And the Mid-Engine Future that's Also the Past.

Chevrolet is slowly getting closer and closer to revealing the all-new eight-generation Corvette. The C8 ‘Vette will be the first time the car’s gotten the engine mounted behind the driver. Finally arriving after rumours that it would happen ranging all the way back to the 1960s. So with the imminent arrival of the latest car, here’s a look at the Corvettes of the past. The good, the bad, and the, well, ugly. Plus the mid-engine history that’s long lurked behind the production cars and why Chevrolet is finally making the switch.

The Corvette story starts back in 1953. As a show car that was so popular that the company was all but forced to build it. Using the chassis and suspension of the bow-tie’s passenger cars and a mildly tuned version of the 3.9L inline six that you could find in almost any Chevy.

The body was made from glass fibre reinforced plastic. Fibreglass. Why the composite material? It’s not altogether clear, decades after, but buyers seemed captivated by the idea. It was also a chance for GM to test the new technology in smaller volumes with a look to replacing steel in more models. 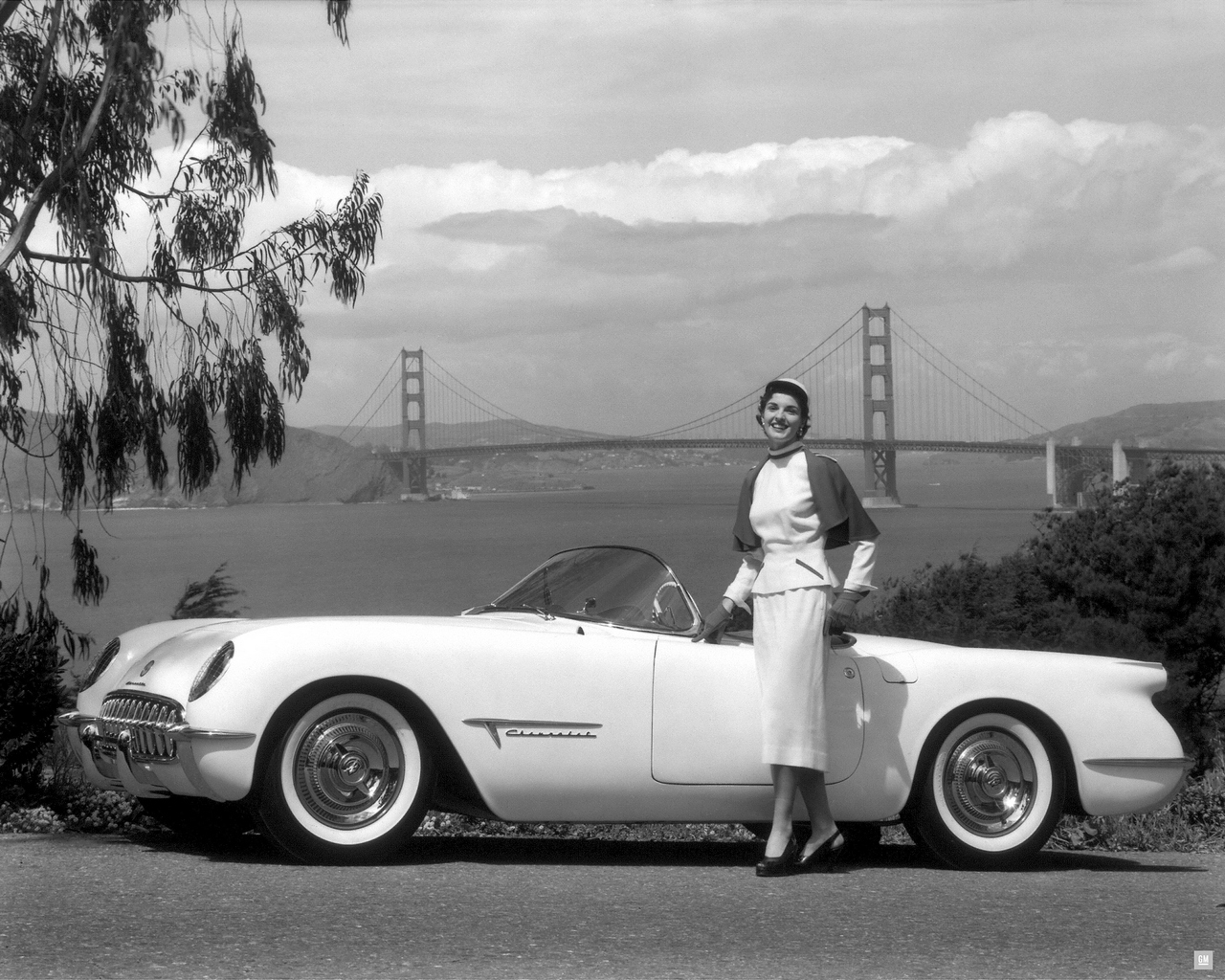 In 1955, the V8 arrived in the Corvette, and now the sports car was off and running. Performance that could match the looks. Even if those looks added more chrome and more headlights for 1958 and on. 1961 brought the quad taillights that remain a Corvette trademark through today. 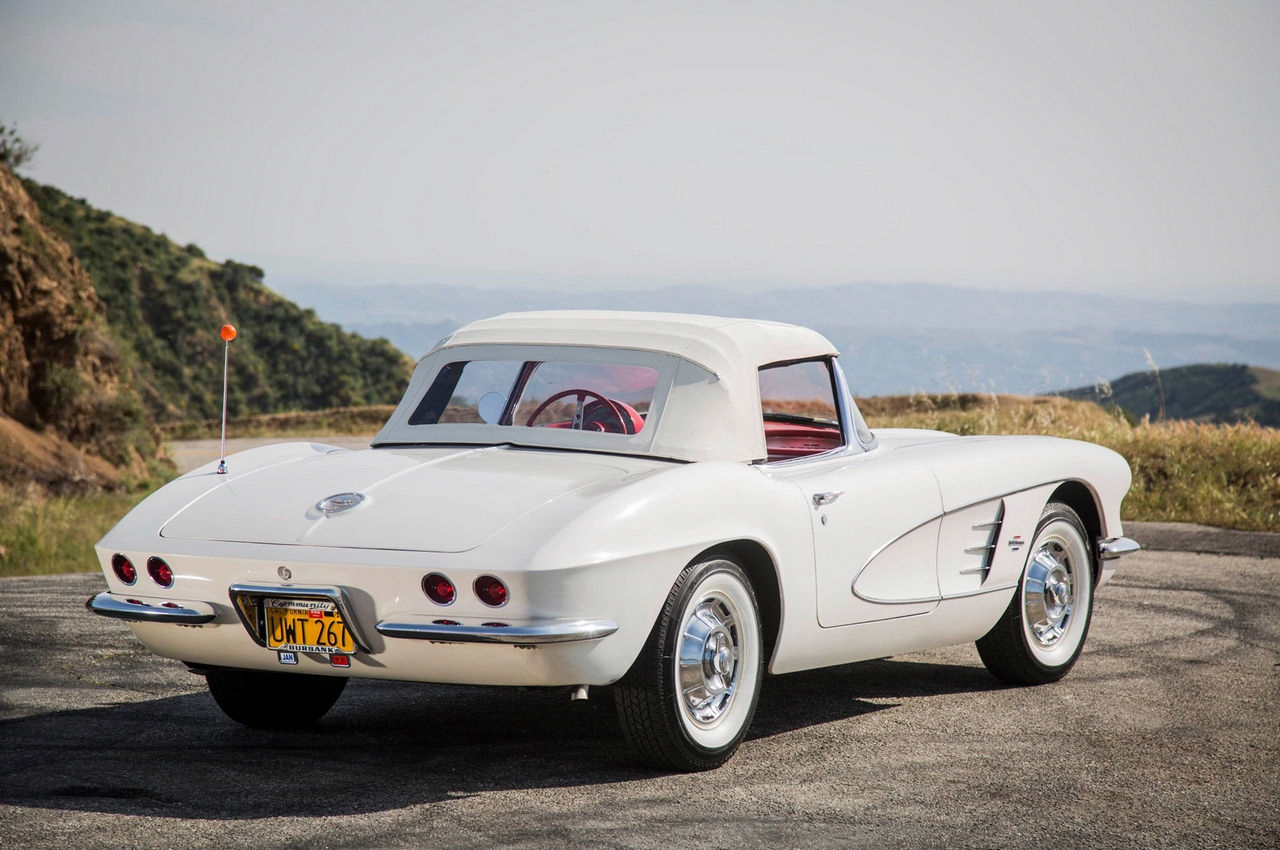 For 1963, the C2 arrived and brought the Sting Ray name to Corvette. An all-new model with not a six-cylinder to be found. The years leading up to the C2 were the time that the mid-engine possibilities first opened up. Zora Arkus-Duntov, an engineer often called the Father of the Corvette, explored various mockups, prototypes, and show cars, some using Corvair bits, of a Corvette with the engine in the back. It looked like a mid-engine production car was even possible, but there were numerous problems, including cancellation inside GM of the transaxle that would have made it feasible financially. 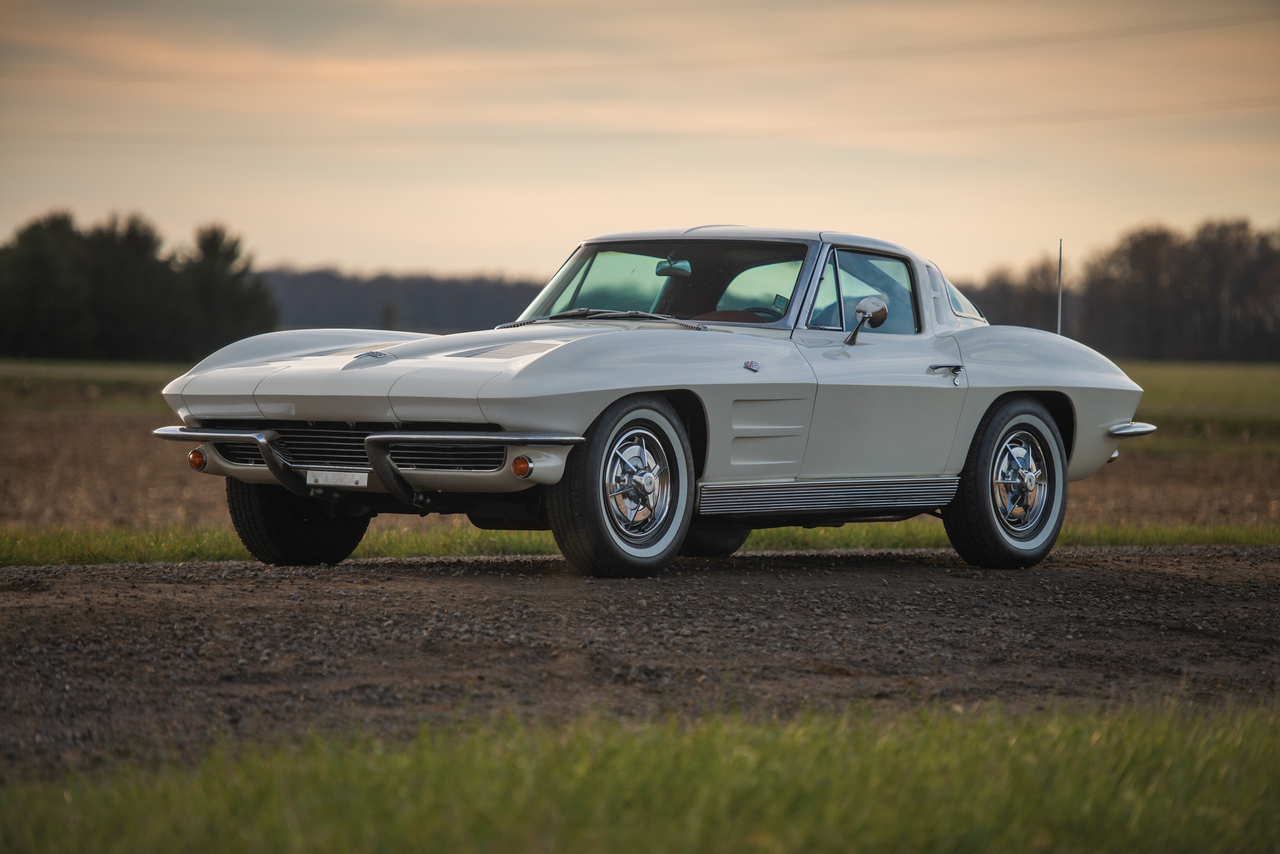 In 1959, Arkus-Duntov, who would remain the driving force in Corvette and in pushing toward mid-engine for decades, started development of the Chevrolet Engineering Research Vehicle (CERV-1). A mid-engine concept designed as a research tool. 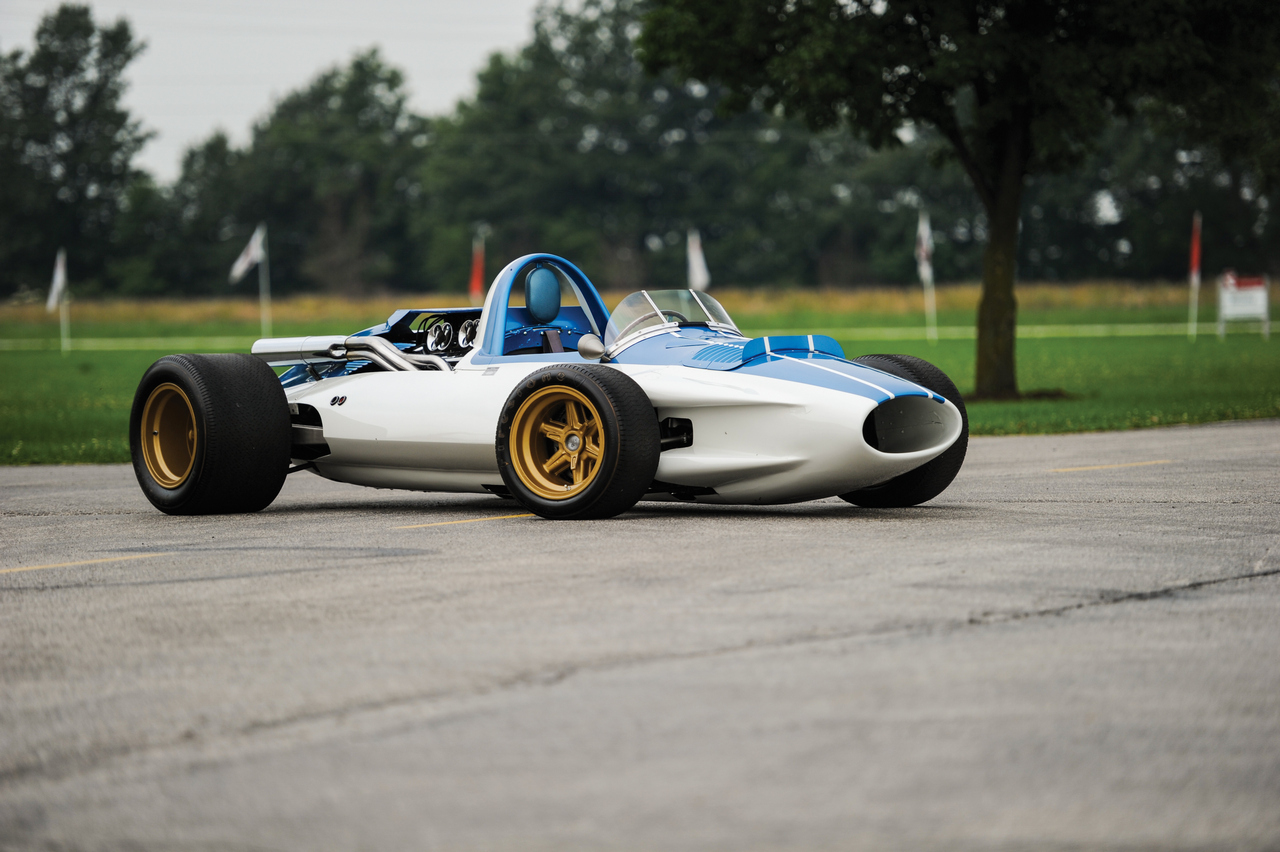 The C2 was the first to offer a coupe, and it came in a sleek fastback style. Hidden headlights would last until into the 2000s. This car used more steel in the chassis and thinner fibreglass, making it lighter than the roadster it replaced. This was the first Corvette that could handle.

Bigger engines would arrive through this generation, cementing the car’s performance reputation. All the way up to 7.0L and 435 hp. Not surprisingly, sales jumped with the C2 as well.

More mid-engine concepts arrived during this time. Like 1963’s CERV II which was an answer to Ford’s GT40. That one used two transmissions to deliver all-wheel drive. But GM supported Chaparral’s racers instead of going after Ford at Le Mans. 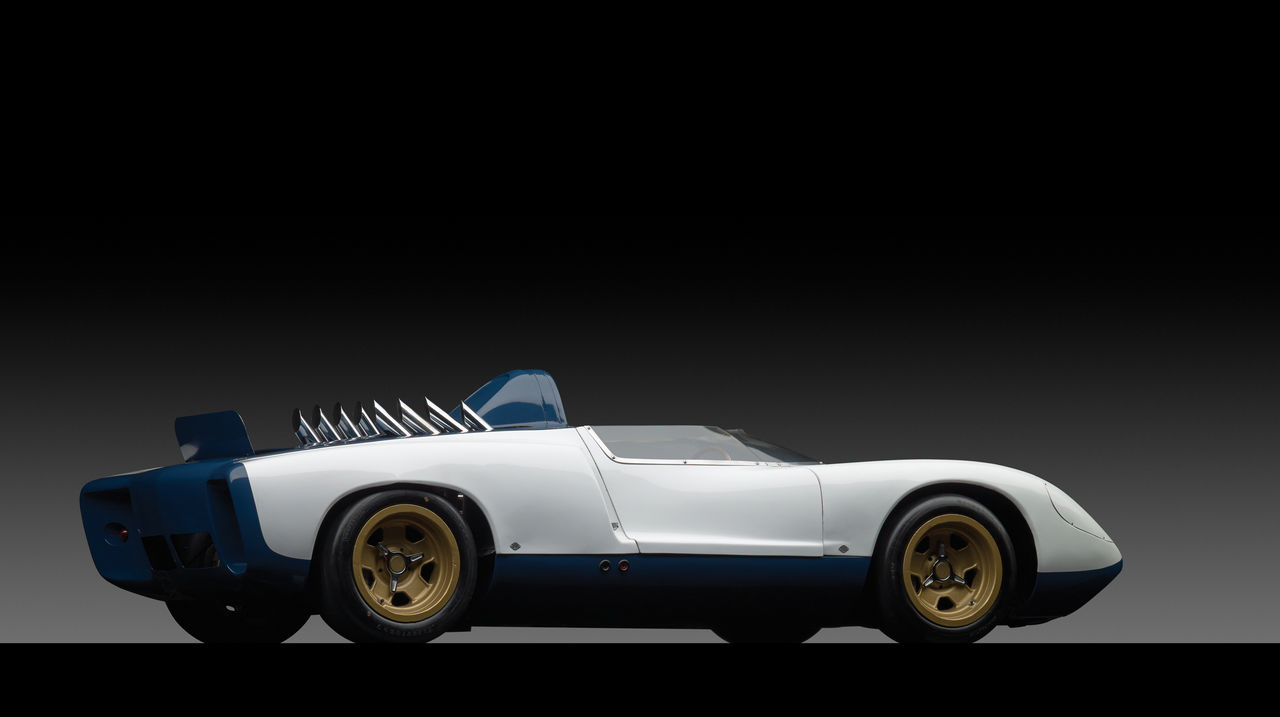 When the third-generation car arrived in 1968 it was a massive styling change once again. Looking like the Mako Shark concept of 1965. Stingray was back, only now it was just one word instead of two.

The C3 was the longest-running version of the car and it was built all the way through 1982. That meant it saw the peak of the muscle car era but also the worst of malaise. From up to 460 hp from a 7.4L big block in 1970 crashing down to as little as 165 from a 5.7L V8 just five years later. Though by the end of the car’s run power had crept back up above 200. 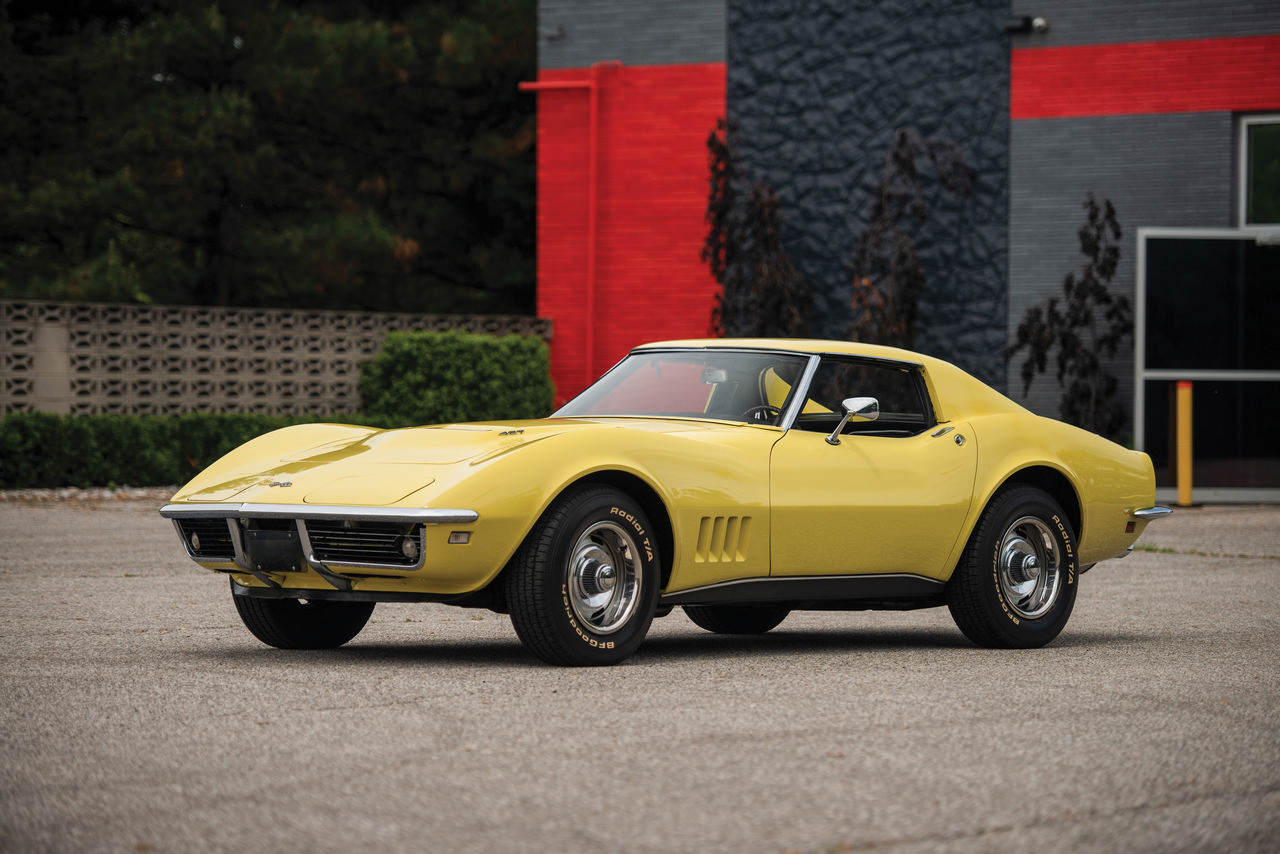 Styling changed too, over the years. From the light chrome bumpers of early cars to the massive plastic bumpers of the later ones. Still, though, by early 1980s standards, the C3 Corvette remained sleek.

Even during the C3’s run, the mid-engine car was lurking in the background. A car, code-named XP-882 and labeled as a Corvette was brought to the New York auto show in 1970. Using a V8 in the back and Oldsmobile Toronado driveline parts to again give it all-wheel drive. Chevrolet wanted to go cheaper with the car, though, not more expensive like this would entail. There was even the aluminum XP-895 in 1972, but again technology and cost quashed the thought. That didn’t stop 1973’s XP-897GT that saw two rotary engines welded together for a four-rotor monster that was destined to failure. 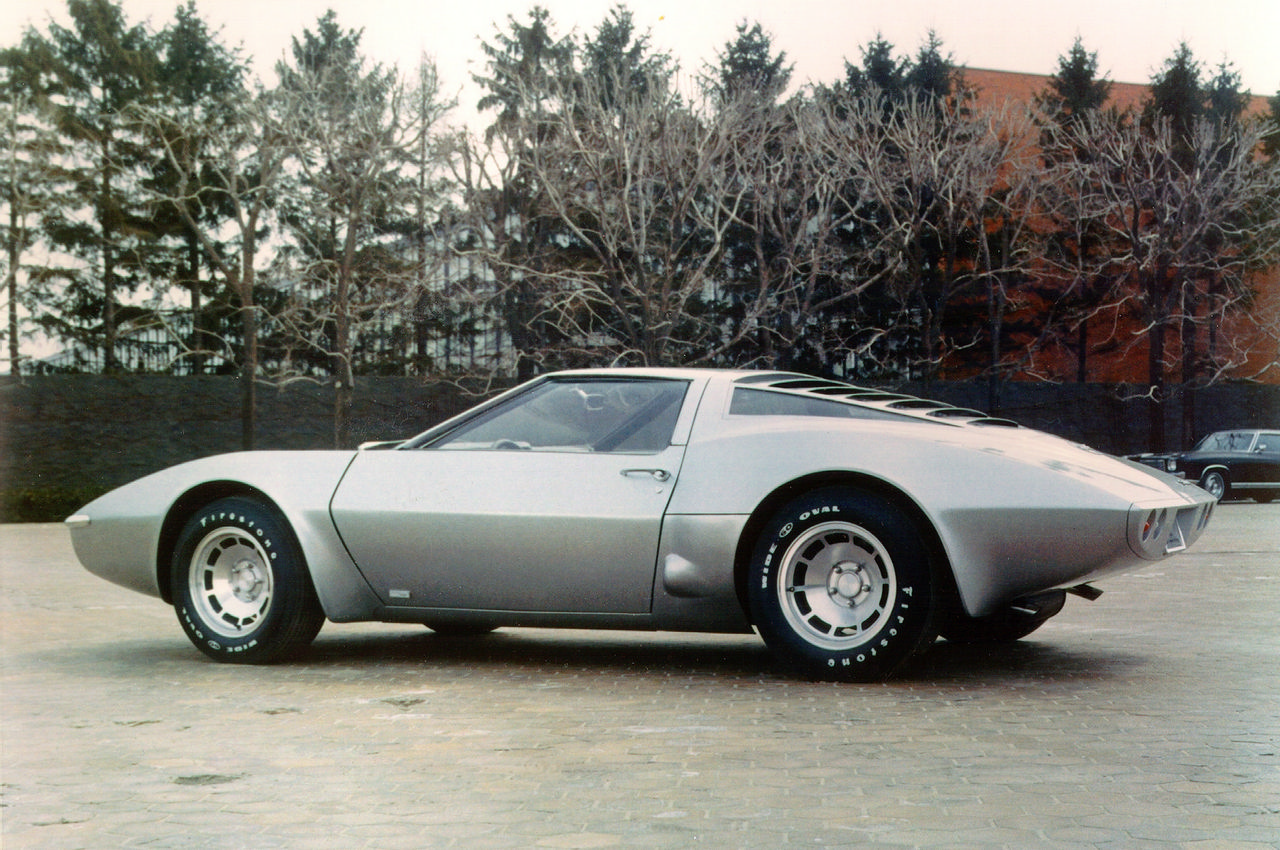 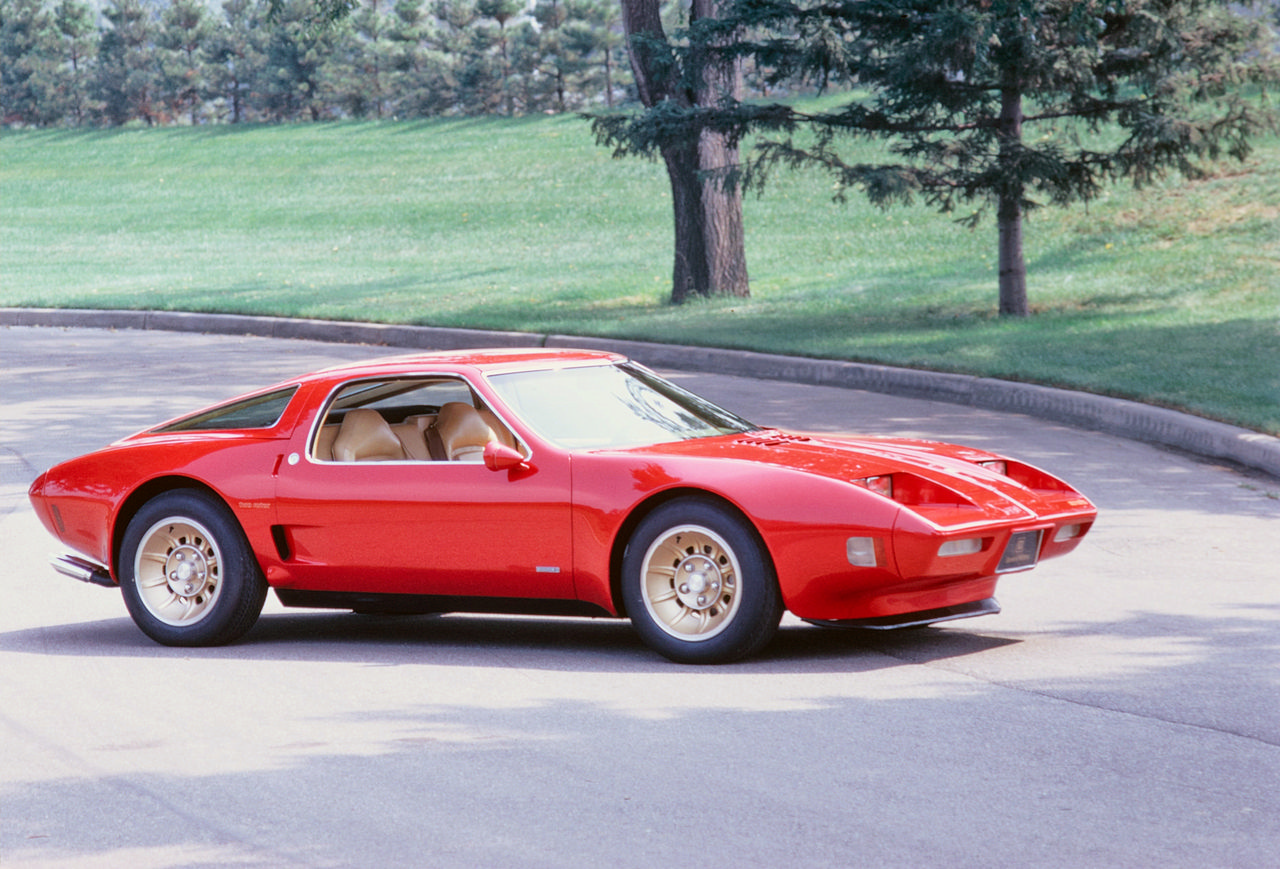 1984’s C4 fourth-generation car was the first all-new Vette since 1963. It was still fibreglass, but the looks were completely refreshed. Angular instead of the C3’s bulging lines. But it still had pop-up headlights as a Corvette should. Fuel injected V8s added power and efficiency. The ultimate C4 was the 1990-1995 ZR-1. With a DOHC V8 designed by Lotus that made 375 hp, bumped to 405 in 1993. That was 125 hp more than the standard 1990 car.

The C4 saw the most special editions, ranging from stickered Pace Car models to the extra power and wide-tired Grand Sport.

While the C4 was selling up a storm, GM developed the Corvette Indy. Looking far more advanced than its 1986 introduction would suggest, it was built by Lotus with a composite chassis, active suspension, and a twin-turbo V8 based on Chevrolet’s IndyCar mill. The concept got new styling and a CERV III name and came back in 1990 with a twin-turbo 650 hp version of the ZR-1’s engine.

1997’s fifth-generation Corvette was quite possibly the first to be a true world-beating sports car. Sitting on a stronger chassis with lightweight measures like a balsa composite floor. It still had pop-up lights and a fibreglass body, but it also had a new generation of V8 and impressive cornering. 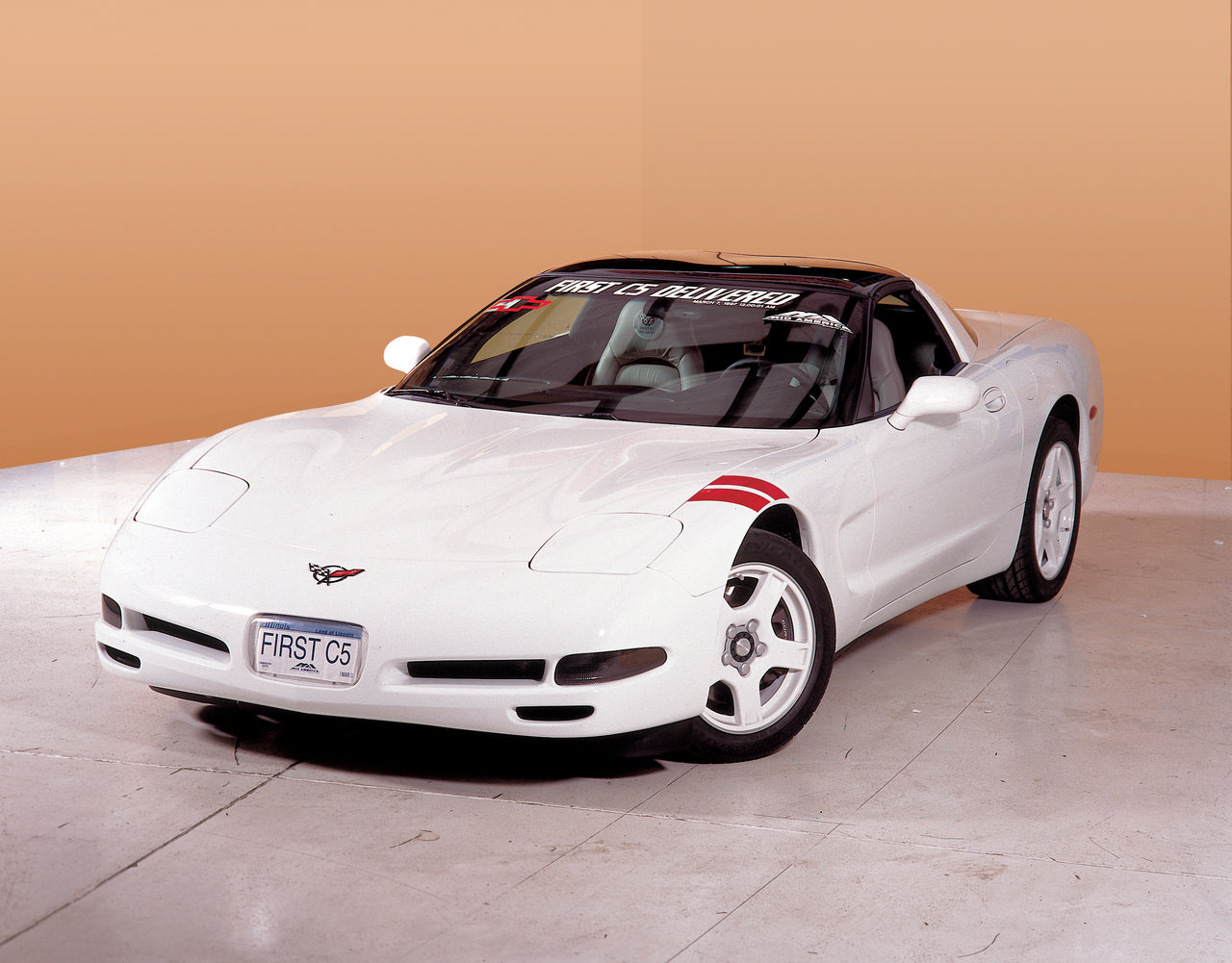 Magnetic ride would arrive on the car, offering improved ride and handling. There was also a Z06 model that added power, came only in the stiffest hardtop body style, and had larger tires, uprated suspension, and functional cooling ducts. A titanium exhaust and thinner glass trimmed kilos from the curb weight.

This Corvette would lead the marque’s return to Le Mans, where it hadn’t been in nearly two decades. Taking three class wins at the legendary race.

The C6 said goodbye to pop-up headlights and hello to even more performance. Under the skin, it was more of a big refresh than an entirely new car. But it came with a massively improved interior. You can’t have that much fast for that little cash without cutting somewhere, and for the C5 it had been the interior bits. The C6 was now up to 400 hp standard, but it was the specials that really shone. 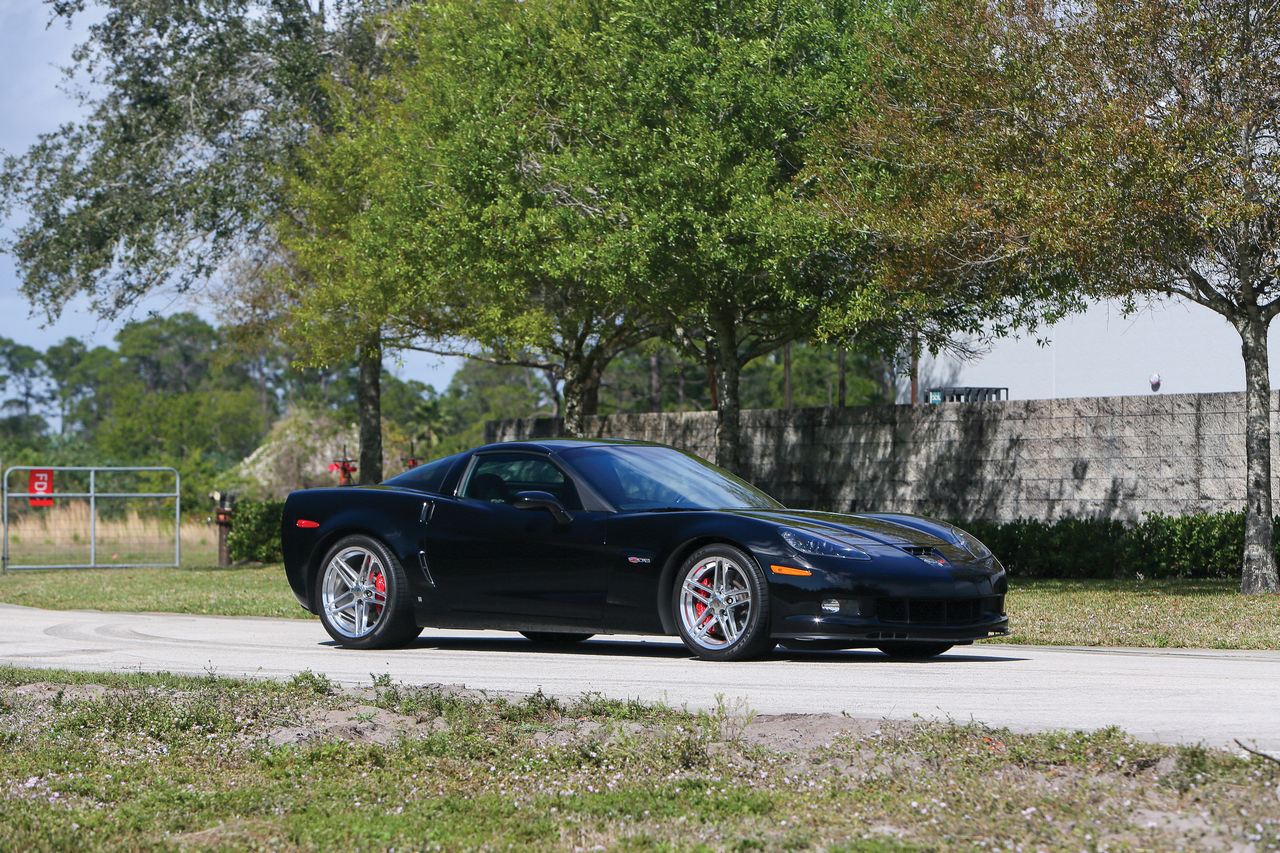 Like the Z06 that arrived for model year 2006. A 7.0L small block V8 managed 505 hp and 470 lb-ft. Chevrolet put an aluminum frame under the car in place of the standard steel, and a magnesium engine cradle. Plus carbon front fenders. That made the C6 Z06 a truly world-beating sports car. On road or on track. Chevy engineers weren’t done, though. The ZR1 packed even more power. A 6.2L supercharged V8 with 638 hp.  Available with a massive rear wing and adding more carbon fibre body panels, this was the ultimate Corvette.

Now the latest. The C7 seventh-gen car. Starting with a 6.2L 455 hp V8. It kept the fibreglass body panels, and the shape was still unmistakably Corvette. Stingray was back as a badge, gone since 1976. The Z06 lost the 7.0L small block for a 6.2L supercharged engine, but power was up to 650 hp. The ZR1 could boost that even higher to 755 hp. But one of the most interesting was the Grand Sport. A mix of standard car with the wider Z06 body for drivers wanting the cornering with a little less power. 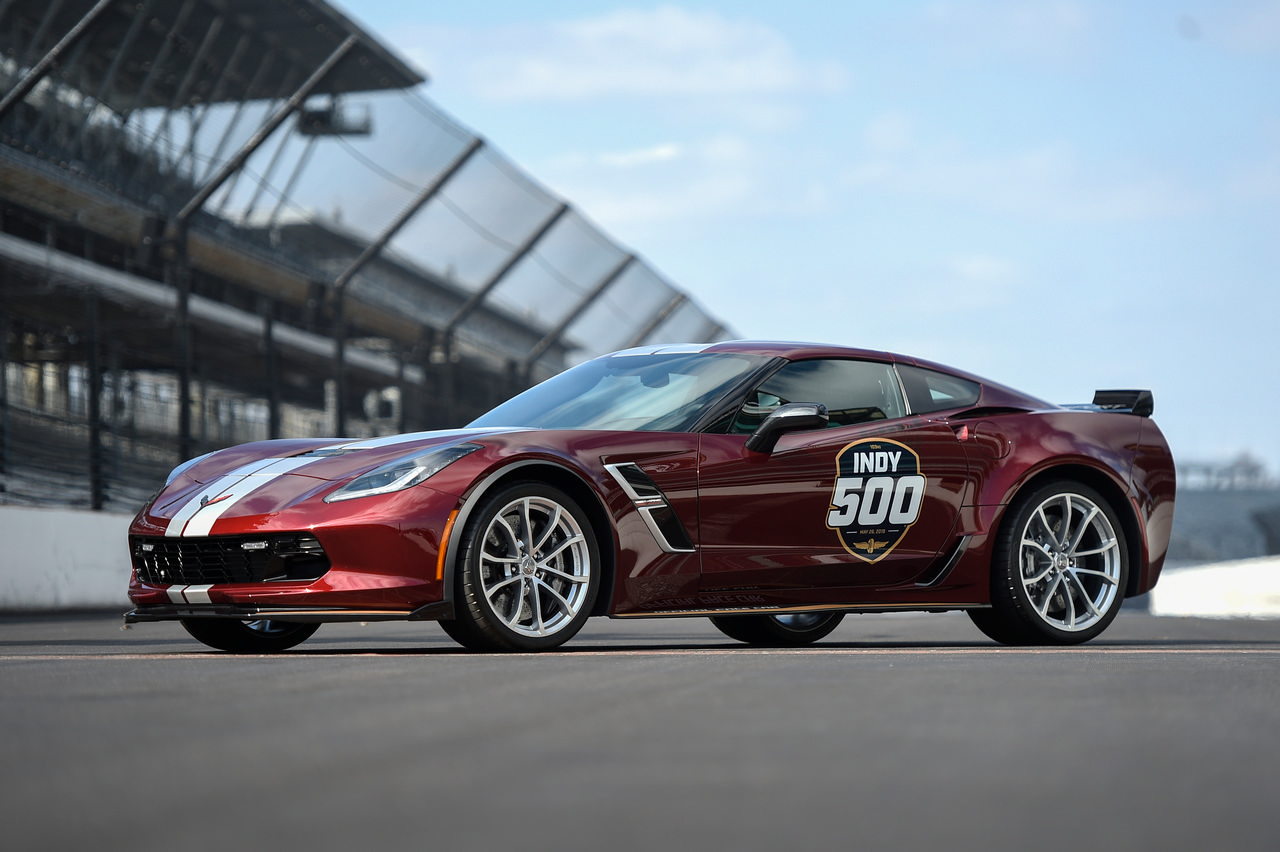 This was the pinnacle of performance. Cars that could run with some of the fastest in the world, regardless of price. Setting track records on circuits around the world. With seven-generations of variations on a theme, it seemed quite likely that the C8 would be more of the same. Fibreglass body, V8 engine, massively quick.

But Chevrolet decided that they would let all of the mid-engine rumours come true. This Corvette would put the engine in the back. Why? Performance.

How many cars can you think of that make more than 700 hp and have the engine mounted up front? Probably only a couple, right? The Corvette and the various flavours of Dodge Hellcat. And the Hellcat is a drag racing machine, not a sports car designed to beat up Porsches and Ferraris on track.

With the engine up front, even if it’s set back to the firewall, there’s only so much weight the car can put on the rear wheels. Which means traction is limited. Put the engine closer to the rear wheels and you have more grip and less tire smoke. You can use more of the car’s power when you’re still in a turn without just sliding the tail. That can mean lower laptimes. Putting more weight into the center of the car makes it more stable, too. 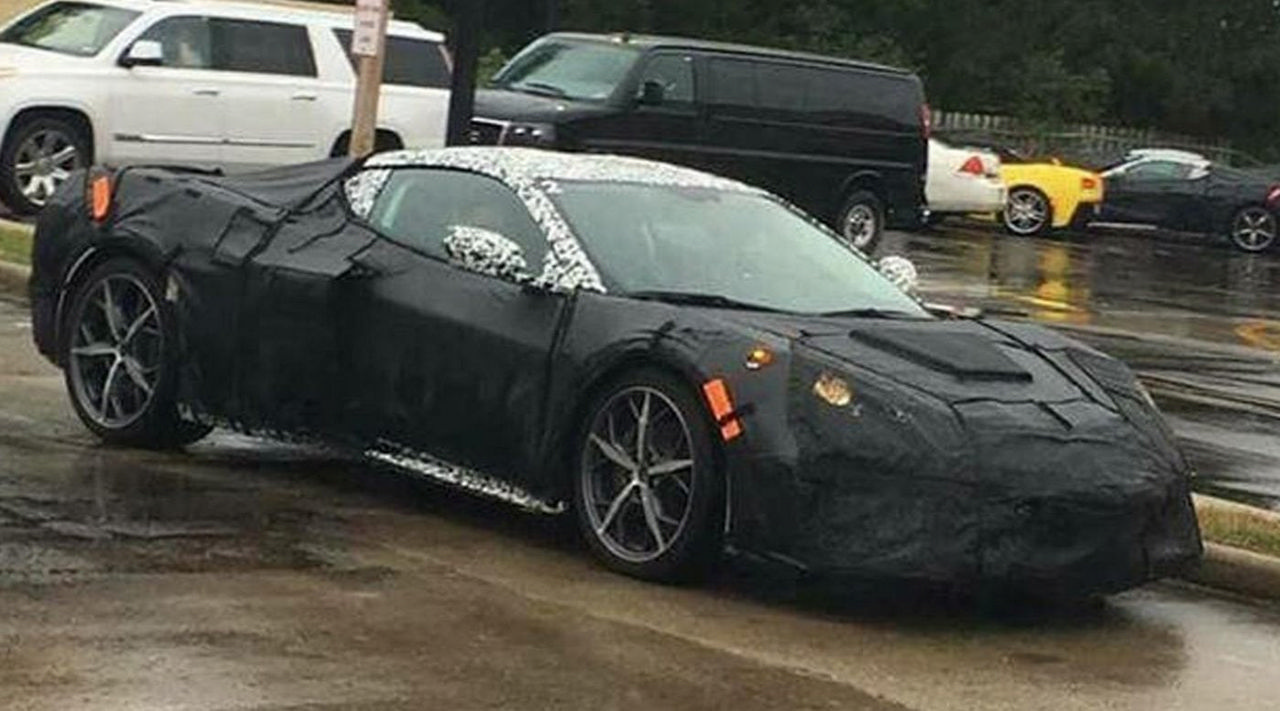 A mid-engine allows Chevrolet to make some new styling decisions. Fast as it is, the Corvette still wears an image it’s had since the C3. As being a car for the older, more mature driver. A mid-engine car can take on more Lamborghini and Ferrari-like proportions and move the ‘Vette from gold chains to bedroom posters.

There’s another benefit. One that hasn’t been brought up much yet, but should be. With no engine in the front, there’s room to put an electric motor. Which can mean more power and all-wheel drive. Completely breaking the Corvette formula, but making for an even quicker and better-performing car. It’s the formula Porsche used on the 918 Spider which is a heck of a performance target to set.

What will a complete reimagining of the Corvette mean for buyers? Well, it could mean a higher price. Chevrolet will certainly try and keep it reigned in, after all, the raison d’etre of the Corvette is affordable performance. But expect this massive performance increase to not come cheap. It also has the chance to put the car on equal footing with its Italian competitors. Both in looks and speed, though hopefully it won’t rise to their price.

When will we get our first actual look at a car that’s been coming for more than 50 years? And find out just what kind of performance and looks the eighth Corvette will offer? July 18th.