Mercedes Goes Big With a Swath of Debuts at Munich Show

IAA 2021 is loaded with cool electrics from Merc and AMG

Join the Conversation (0)
MUNICH, GERMANY - The international auto show has returned to Europe after a very long absence. Mercedes-Benz has shown up at the show in a big way, revealing half a dozen new models in what has to be a poke in the eye to BMW at what is now the latter brand's home show. New on the stand were an AMG model of the EQS, a concept electric G-Wagen, a new Maybach EQS, the EQE, the EQB, and a concept that lets you control the car with your mind.

Mercedes is bringing the midsize EQE to Canada. The midsize Merc sedan is more than just an electrified E, it will instead be based on the same electric architecture as the EQS. It will arrive badged as an EQE 350 with 288 hp and 390 lb-ft of torque. It will charge on Level 2 as quickly as 22 kW with the optional charger or up to 170 kW on Level 3. The latter will top up the battery from 10 to 80 percent in as little as 32 minutes. With a 90 kWh battery, Mercedes estimates up to 660 km on the WLTP cycle.

The EQE will get Mercedes' Hyperscreen, the massive panel first seen on the EQS, though slightly smaller in this smaller car. It merges several screens under one bezel for a seamless look. For size, Mercedes says to look at the CLS, though with a trunk instead of a hatch. 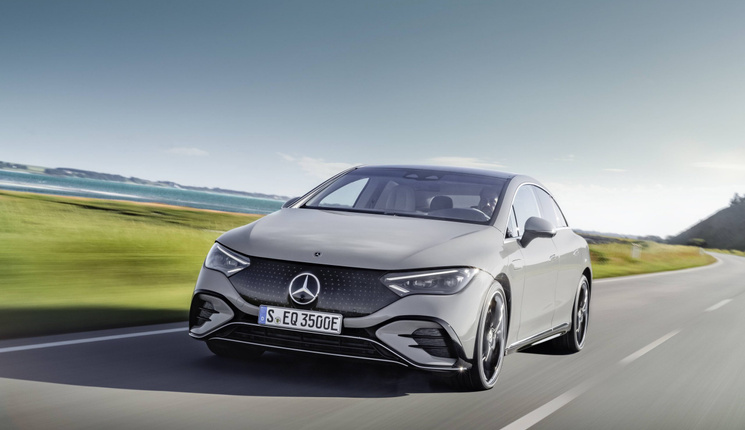 Burmester audio will be offered, as will be an Airmatic air suspension. Rear-steering is available and Mercedes says it'll cut the turning circle to city car size. Over-the-air updates will be offered including new headlight modes and other anticipated changes.

It's not the most exciting vehicle on the list, but so far the Mercedes-Benz EQB is one of just two on the list confirmed for Canada. The electric version of the GLB will arrive here in 2022 as the EQB 350 4Matic. It is based on the chassis of the GLB but gets some of the more upscale design details of the EQ series including a full-width LED tail and the EQ flush grille. The initial model will offer 288 hp and a WLTP estimated 419 km of range. L3 fast charging is up to 100 kW, meaning a 10 to 80 percent charge takes about half an hour. A year of Mercedes me charging is included, the charging network guarantees green power is used or contributed to the grid in kind.

Production starts late this year with arrival here in 2022 for both the EQE and EQB. Mercedes says the EQB will get loads of driver assistance including active lane-keeping and active brake assist as standard. Pricing is yet to be revealed. 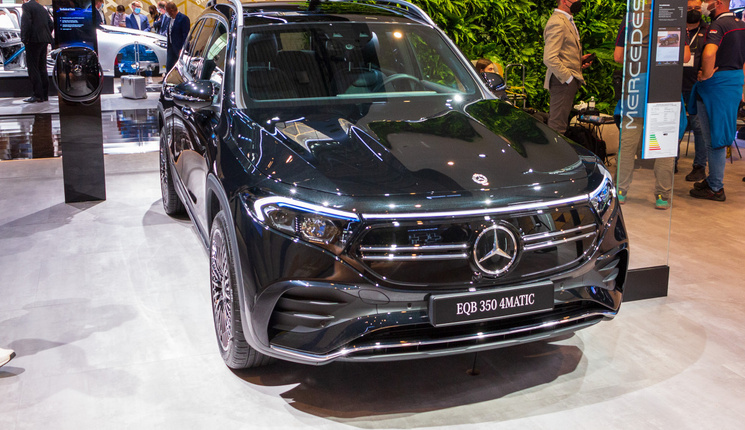 The EQS will come here, so it seems likely the AMG version will as well. That's the 750 hp (on Race Start mode) with 750 lb-ft electric monster sedan. It's the first all-electric AMG, but it looks like it's pretty serious. One motor front and one rear provide the 658 hp that it will generate in normal driving, and it makes that 750 lb-ft either way. The motors are AMG-specific permanently excited motors and the cars offer AMG-spec sound modes that are driver-selectable or by default in the drive modes. Other AMG-specific changes include electric cooling upgrades. Even the motor's rotor shaft is cooled to keep up max performance. That rear motor is more powerful than the front to help provide an AMG rear-biased feel, and 300 kW of regenerative braking is possible.

The 400V battery has 108 kWh of usable energy with AMG-specific wiring as well as cooling. It can charge at up to 200 kW on Level 3 stations, meaning 300 km of range in 19 minutes. Total range is up to 580 km on the WLTP cycle. It will offer an AMG version of the Hyperscreen interface while the interior will get AMG seats and trimming. More options include more AMG cosmetics but ceramic brakes are also on the list. 21 and 22-inch wheels are offered. Interestingly, the plant that makes it is carbon neutral, sourcing 30 percent of its electricity from solar panels on the roof. This one's badged as an AMG 53, 10 less than the current crop of top-shelf AMGs, implying that the team at Affalterbach could do even better on the electric side with a bit more time.

While an AMG EQ model seems inevitable, it's this Maybach EQS SUV concept that is the ultimate expression of the EV. The automaker says that the Maybach brothers set out in 1921 to make the very best of the very best, and this luxury concept might be the first to truly meet that. Sure there are some slightly tacky details like the cluster of Maybach logos on the B-Pillar, but this EV offers some serious presence. It has all of the high-tech of the EQS, but also offers special LED lights with a knit logo mesh. It has Maybach pinstripes in the grille that are chrome plated, with more chrome for the bumper air intake. Then there is the Maybach hood lettering and trim strip. It's a stunning two-tone with pinstripe, with rear LED lighting, and those alloys are 24-inches in diameter. 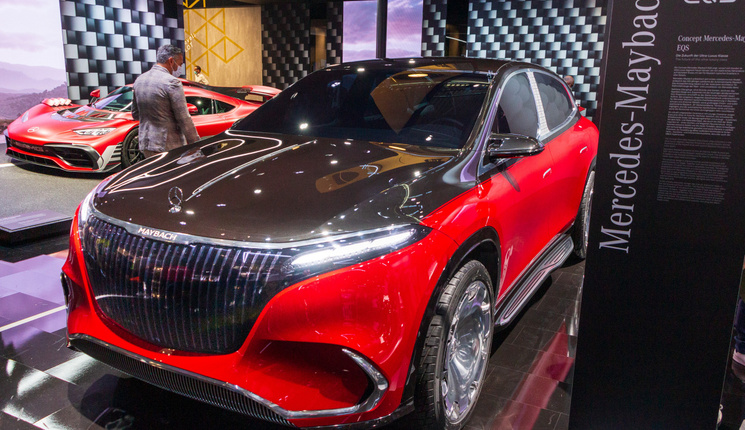 The interior is even more luxurious, including seats taking inspiration from the Maybach S-Class. The brand uses the extra height of the SUV body to offer larger calf rests and a faux fur floor cover. Up front is a floating center console Mercedes says adds to the feeling of space. There is also a vase, though don't confuse this with a New Beetle. Storage areas offer space for utensils and options like folding tables, champagne goblets, or a fridge. Interestingly, the rear seat area uses a textile instead of traditional leather for a more modern luxury experience.

GMC might have started the off-road electric image car with the Hummer EV, but the Mercedes Concept EGQ might match that one for cool and certainly will beat it for exclusivity. The EQG story starts with a promise from the then Chair of Daimler to Arnold Schwarzenegger back in 2018. While just a concept, Mercedes says this one could happen as the company will be ready to go entirely electric by end of decade. 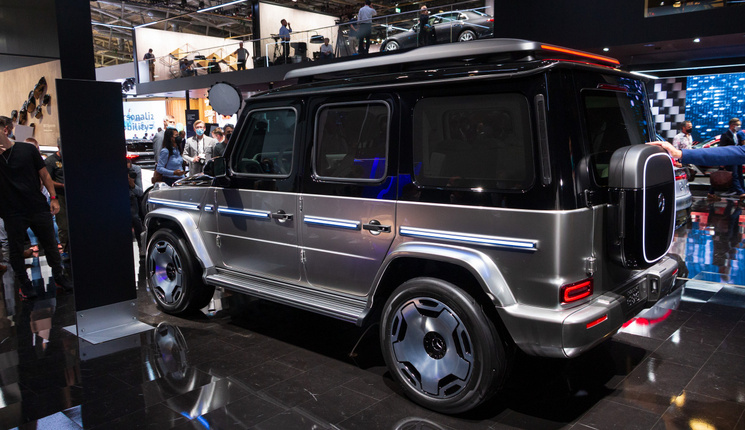 The G shape with a flush black panel EQ grille is a stunner, but the two-tone of this one really sets off the shape. Look around back for cool details like a square spare tire cover. Mercedes says that it will face the same Schöckl Mountain durability challenge as the gas model before it sees production. Four electric motors are individually controllable and can be programmed to behave differently on-road than off. Real off-road traction will be possible thanks to a shiftable two-speed gearbox making sure it is a real G.

Though not confirmed for production, Mercedes came as close to actually confirming it as possible. We'd expect to see this one around mid-decade, at least in some markets.

The last is pure concept. The kind of car you dreamed up as a child, but so much cooler when executed by a top-level automaker. The Mercedes-Benz Vision AVTR uses a theoretical brain-computer interface that lets you set a destination, change audio, and more. 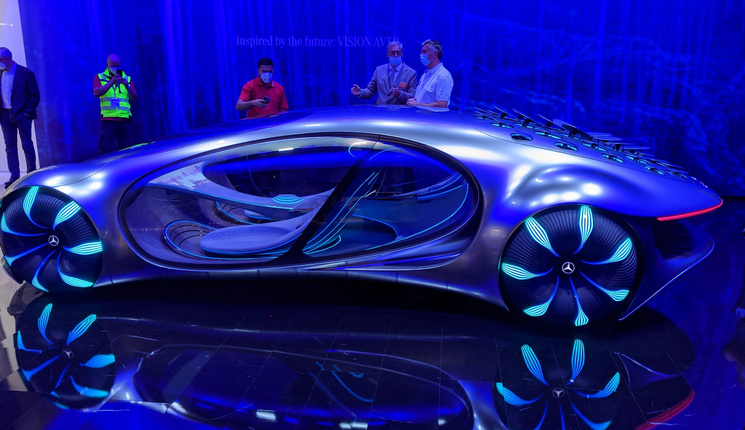 While it's the stuff of science fiction dreams, the tech is close enough to reality that Mercedes is letting showgoers try out the real thing. The car is, like its name implies, inspired by the film Avatar and its mind-meld connection between characters. It also has what Merc calls a "one-bow" design and organic design language including actual growing materials and a compostable battery