A couple with a passion for sustainability deserves a wedding limo for a new age.

Join the Conversation (0)
Reviewing cars for a living has an unintended side effect: I feel a duty to secure exceptional transportation when life’s biggest events come around.

And the latest such occasion was a particularly special one. My best friend of 37 years was getting married, and she asked me to be her maid of honour. Not only did I get to stand beside her as she committed her heart to her new husband, but that I’d be responsible for finding the wheels to get her there was a barely mentioned assumption.

With an entire industry of cars to choose from, how was I to decide which vehicle could be worthy of such auspicious responsibility?

Once I started narrowing down based on the couple and their own preferences, the right choice became obvious.

Theirs is a two-car household with an electric vehicle, a Tesla Model S (a 75D that’s roughly six years old, for those wondering), and a plug-in hybrid, a 2019 Volvo XC60 T8. The latter was bought as a more practical vehicle for longer trips, but its engine gets run so infrequently that my bestie often gets warnings that her fuel may be going stale.

An ideal wedding car for this couple would therefore need to be fully electric to run as sustainably as their own fleet. Plus, it would have to seat five (the bride plus her four bridesmaids; the groom and his party arrived separately) and be noticeably more upscale than what they already have in their driveway.

Very few cars can land on the other side of that equation, which is how we found ourselves in a 2022 Mercedes-EQ EQS sedan. 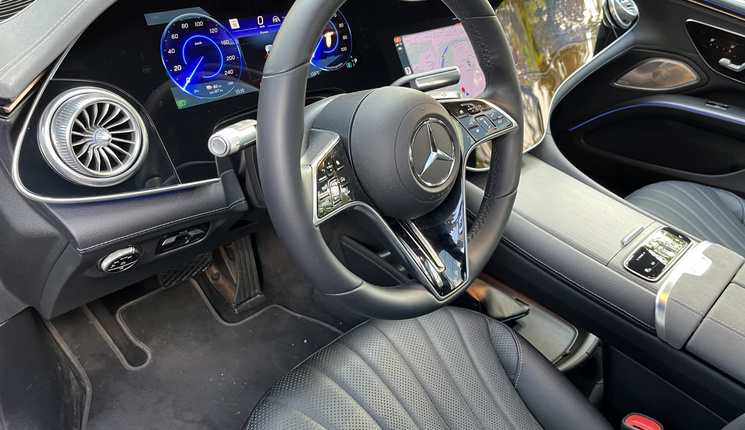 With 56 inches of front-row screens as standard and optional four-position massaging seats, four-zone automatic climate control, luxury headrests, and a tablet and wireless phone charger embedded in the rear centre armrest, the EQS is far and away the most opulent EV on the road today. At just under $170,000 as tested, it’s a relative bargain.

That we needed the fifth seat meant the excellent rear centre console with its MBUX tablet would need to be lifted out of the way to make room for our junior bridesmaid. Fortunately, we had the car for a few days in advance, which meant my daughter—who has been my under-credited back seat reviewer for many years—was able to show said bridesmaid how to extract the tablet before stowing the console away so that everyone in the back seat could still easily access the comfort controls.

That’s not to say everything leading up to the big day involved sunshine and rainbows. While the EQS has a generous estimated range of 574 kilometres, numerous errands leading up to the wedding saw that drop to just over 100 km by the day before. That was enough for the short drive to the ceremony but provided little cushion for unexpected emergencies. An EV owner would own a Level 2 charger and do 80% or so of charging at home, but I don’t yet have one installed at my house. No problem, though, I thought: there’s a Level 3 fast charger at my local mall, so I’ll just plug the car in there while I run inside to pick up a few last-minute items.

I checked that the charger was free in the morning, but in the ten minutes it took me to reach it, a Tesla Model 3 had started a session. (Perhaps I’m missing something here, but why the Model 3 would choose the one 50-kilowatt CCS charger instead of using the large bank of Superchargers in the same parking lot is entirely beyond me.) I checked back again later in the day, and this time the charger was blocked by not one but two internal combustion engine vehicles. Non-EV owners, please don’t do this. It's incredibly frustrating! 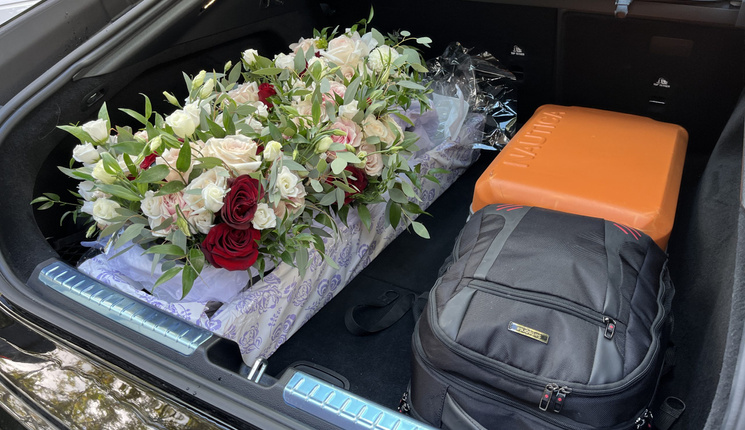 Fortunately, we were getting ready for the wedding at my friend’s house, and she has a Level 2 charger for her PHEV. It’s slower than average, but we were able to add about 100 kilometres of charge overnight, which was just enough to quell range anxiety for the big day.

After hours of primping and preening, the time finally comes to head to the ceremony. I unplug the car, hike up my floor-length skirt, and trade my shiny gold heels for driving flats as everyone gets settled into the plush Nappa leather.

I say, “Hey Mercedes, turn on all of the massaging seats.” The car dutifully complies in all four corners.

Then, I follow it up with, “Hey Mercedes—no, cancel—hey Siri, play ‘Chapel of Love’ by the Dixie Cups on Spotify.” (It’s important to remember which virtual assistant to address when you’re attempting to impress people.)

My passengers are suitably wowed. And then, as I’m about to back out of the driveway—with my best friend looking stunning in her bridal gown and her four closest women faithfully riding along—it suddenly dawns on me that delivering us safely to the ceremony has fallen entirely upon my shoulders. The task of driving five kilometres has never felt so very heavy. (No wonder people usually hire limo drivers.)

Fortunately, thanks to the 516 horsepower and 630 pound-feet of torque, standard air suspension, and optional rear-axle steering with up to 10 degrees of angle, the EQS’s power, comfort, and manoeuvrability are all more than up to the task of transporting a carload of jittery women without adding unwarranted anxiety. We arrive on schedule and without incident, the entire wedding day goes off without a hitch, and the bride’s transportation is accomplished without burning a single drop of gasoline.

Someday, this will be so normal that it won’t even warrant a mention. But today, it goes on the record as another remarkable step into the coming age of all-electric driving.