This is one bonkers 4-banger.

Join the Conversation (0)
It wasn’t long ago that the V8 engine in the mighty five-litre Mustang made only 225 horsepower. With technology at the fore, Mercedes-AMG has created a four-cylinder engine belting out more power than that old pony car could ever dream of producing.

Enter the world's most powerful four-cylinder engine in series production, making a gob-smacking 421 horses at 6750rpm.

Hand built in Affalterbach, this monster motor will also make around 370 lb-ft of torque at 5000rpm, meaning this engine is more than just about sky-high horsepower claims, though it does rev to 7200rpm. One twin scroll turbocharger with roller-bearing compressor and turbine wheels force-feeds atmosphere into the engine to the tune of 30psi (2.1 bar). Before you write an email to Greenpeace, know that it also has an eco-minded start/stop function.

Those numbers are good for the hot S version of the engine. A workaday basic version makes 387hp at 6500rpm and about 355lb.-ft of twist at 5000rpm. The difference in horsepower can be chalked up to its maximum charge pressure being limited to “just” 27.5psi. It’s still an incredible amount of power from a four banger. 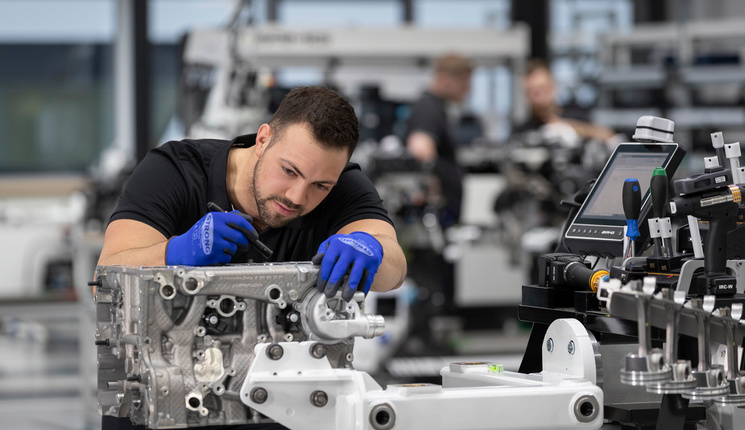 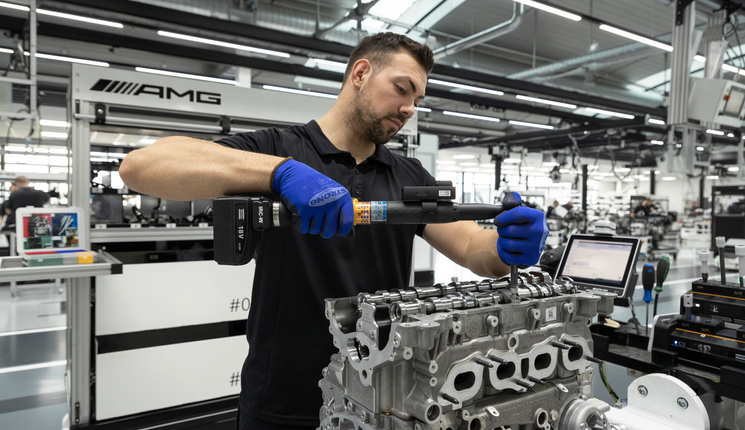 Other goodies? An additional radiator in the wheel arch supplements a large unit in the front, with a low-temperature circuit used for air/water intercooling. Together with the intercooler connected in series, the coolant flow through the radiators is assisted by a high-performance electric pump.

Two stage fuel injection – in the combustion chambers and intake manifold – keeps the go juice flowing at nearly 100psi. Internally coded the M139, this four-pot will carry an AMG engine plate bearing the signature of the assembly technician, just like on its brothers with more cylinders.

Merc also worked to change the assembly processes in Affalterbach, deploying driverless carts which deliver supplies to engine assemblers at their stations. The cart itself on which the mill is built has its own independent power supply and features an integrated tablet computer to furnish the builder with instructions. Huge engine blueprint papers are a thing of the past here.

Also new is a series of cordless tools, ones that are immediately to hand rather than hung from the ceiling like stars at an elementary school play. Each tool is connected to the WLAN of the engine assembly shop, enabling torque settings for the relevant assembly stage to be automated by indoor tracking. All tasks can also be digitally recorded for quality assurance.

Expect this dandy mill to pop up in some of Merc’s smallest cars, such as the CLA and GLA 45.