Meet Argo, the ATV that can take on land or water

The Argo’s secret weapon is that it’s essentially a boat with wheels—either six or eight, depending on the model.

Join the Conversation (0)
BURNET, Tex. — I’ve driven just about everything on four wheels, but this is my first time on eight.

And it’s the first time I’ve arrived at the edge of a river without stopping and turning around.

I’m on an Argo, an off-road vehicle famous for being able to tackle just about anything. Not only that, it’s actually a Canadian success story.

Each one is made in New Hamburg, Ont., by a company that also supplies the military.


The Argo’s secret weapon is that it’s essentially a boat with wheels—either six or eight, depending on the model. The tires have a raised-bar tread pattern that wraps around the sidewall. In water, these act like little paddle wheels to move ahead or back.

On land, the fastest model can hit about 40 km/h.

It’s not quick off land, topping out at about three to four knots, but it can handle any depth providing the water’s not too choppy. If you want faster, you can bolt on an outboard motor.

I was a bit apprehensive when we arrived at a massive Texas ranch for the demonstration, because I’d never driven one before and didn’t want to look like a hopeless dweeb among more seasoned outdoorsy writers.

I needn’t have worried, because the Argo’s dead simple to operate. Put the transmission lever into forward or reverse, and twist the accelerator to make it go.

It uses a skid-steer mechanism, meaning that when you turn, the wheels on one side stop, while the other side continues to move and pivots around. Most skid-steer vehicles use a separate lever for each side, which can take considerable practice to operate smoothly, but the Argo uses a single set of handlebars. After just a couple of spins in the parking lot, I’d mastered ninety-degree turns.

I also quickly mastered rocks, a swamp, and even a set of stone stairs. The beauty of the Argo is that you just point it where you want to go, without worrying about ground clearance or what’s in the way.

There are no exposed components under the one-piece body, and every wheel is driven. As long as one tire has traction, the vehicle will get through.

Argo also sells metal or rubber tracks that go on over the tires for extra traction.

The downside is that all this ability comes at a price.

The lineup starts at $11,595 and tops out at $27,945. Most buyers will also add some options, which include a winch, convertible top, heater and windshield wiper. At the end of the day, it’s not cheap.

Up until now, the company’s been fairly low-key, selling mainly to hardcore enthusiasts and commercial users who would buy a base platform and outfit it as needed.

Argo is now getting aggressive with its marketing and is hoping to tap into the leisure segment, especially with its new high-end LX lineup.

That’s still a limited market, given that few people own the size and type of property where an Argo’s ability is required. There’s more sales promise in new models that come factory-customized for specific users, such as the Wilderness Outfitter, the HuntMaster and the DuckMaster — the latter comes with Duck Dynasty endorsement. 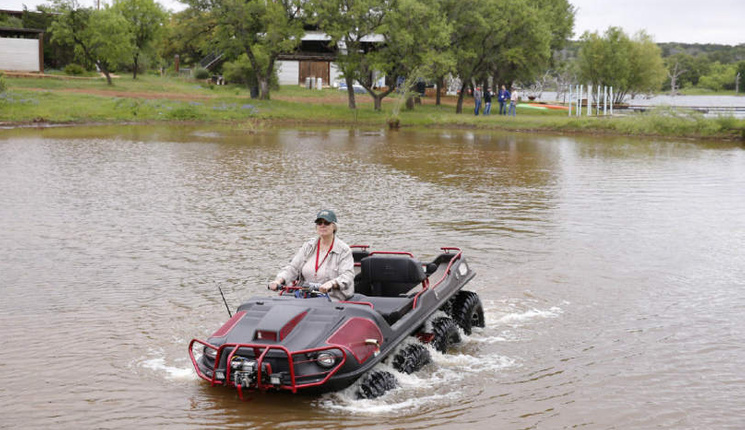 The coolest Canadian vehicle company you’ve never heard of. The Argo itself has been around since 1967, but its parent company, Ontario Drive & Gear Limited, was founded in 1962. It supplies components to a number of companies, including the transfer case gear assembly in the Jeep Wrangler Rubicon. About half the Argo’s components are made in Canada, including the vacuum-formed body, while the rest come from the U.S.

Argo also makes smaller, unmanned units for first responders and the military. Most are battery-powered and are operated by remote control, although there’s one that tethers itself to a soldier with Bluetooth and keeps track of the path being taken. Should the soldier be injured, he or she can get on the Argo, which will travel back along the same route. Some of the remote units can drag fire hoses, and are used to pinpoint the heart of a fire when personnel can’t get inside.

The U.S. is planning a moon launch for 2020, and should it happen, an Argo moon rover will be part of it. The prototype is finished—alas, NASA and the Canadia Space Agency wouldn’t let the factory reps show us photos of it. As with the previous lunar vehicle, the astronauts will use it to explore the surface.

And if it’s anything like the one I boldly drove where no regular ATV would dare go, they’ll have a blast with it.

Jil McIntosh is a regular contributor to Toronto Star Wheels. For this story, she was a guest of the automaker. For more Toronto Star automotive coverage, go to thestar.com/autos . To send feedback: wheels@thestar.ca .