Without getting too technical this engine uses a combination of both the gas engine’s spark ignition and diesel-like compression ignition cycles that run in conjunction to produce far better power, superior fuel economy while producing much lower emissions.

IRVINE, CA – Since the invention of the automobile there has been two main methods of propulsion duking it out.

Each has their advantages and disadvantages with power production, fuel economy and emission controls.

Trying to combine the advantages of both while eliminating the disadvantages has been the bane of engineers for years.

A combination of both ICE and CIE was always thought to be the holy grail of engines, but it looks as if the Mazda engineering team have actually managed the impossible with the SPCCI (Spark Controlled Compression Ignition) Skyactiv-X engine.

Without getting too technical this engine uses a combination of both the gas engine’s spark ignition and diesel-like compression ignition cycles that run in conjunction to produce far better power, superior fuel economy while producing much lower emissions.

In normal driving the engine will cycle between both, during initial acceleration and higher engine revs, it runs like a conventional spark-controlled engine but between the lower and upper extremes it will run like a diesel compression ignition cycle but with an ultra lean fuel mixture.

The engine uses the Miller valve system, a variant of the Atkinson Cycle, which allows for a momentary overlap of the intake and exhaust cycle to optimize the fuel-air mixture which helps in maintaining higher rpm’s.

Skyactiv is not all about the new engine, the seventh generation platform has been reengineered to include stiffer suspension mounting pints, faster diagonal load transfer rates and integrated damping modes that increase the feel between the road, suspension and driver.

The seats have been totally reengineered have been specifically designed to maintain upper body positioning and posture of the passengers to mimic as close to a natural position, as walking or standing.

There are a number of additional supports added to prevent slouching on the seat and back support. 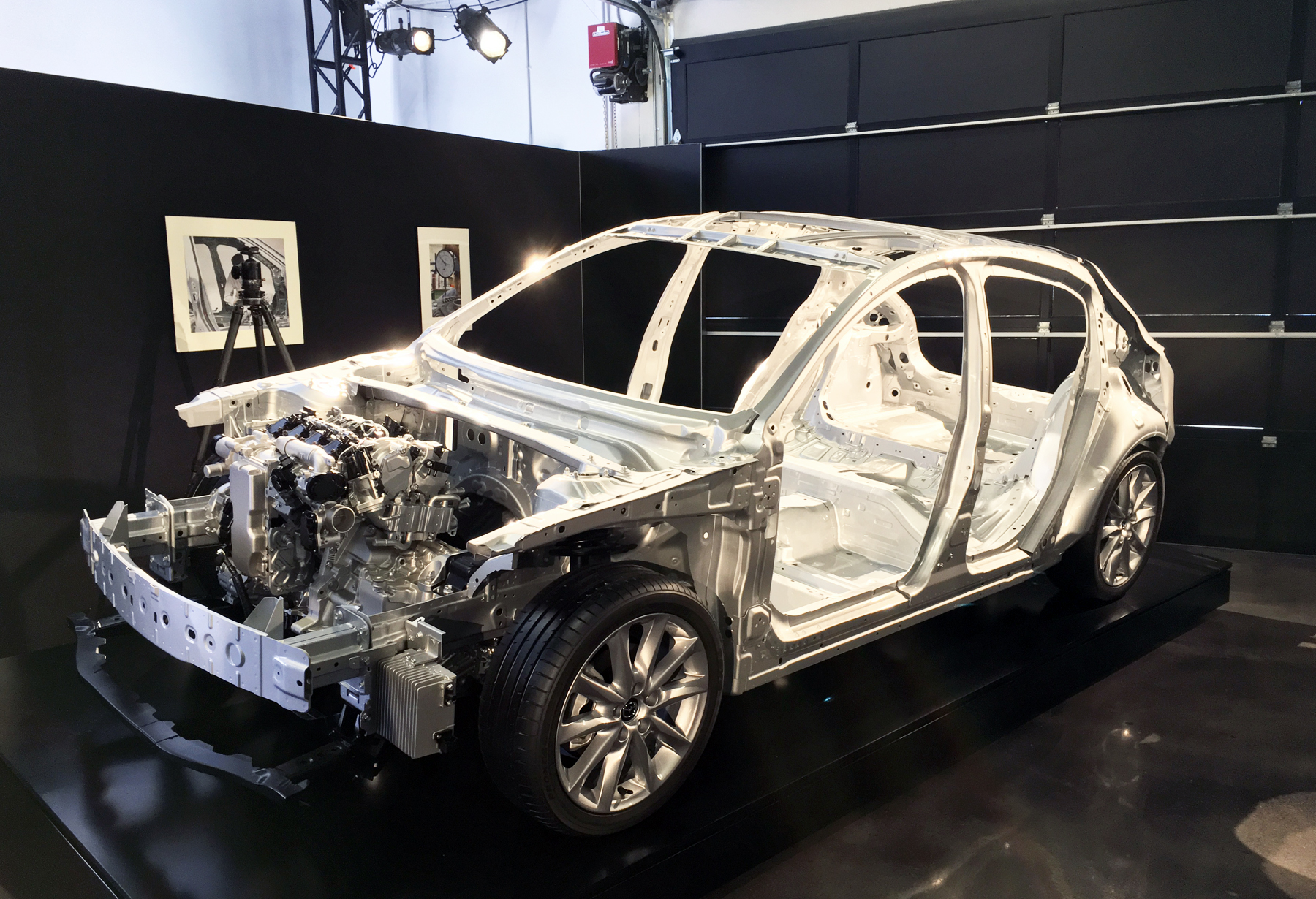 For the test drive we had a current model Mazda 3 that had been mounted to the new framework but included the new engine and transmission/manual gearbox.

The interior was sparse and set up purely for the function of engineers to gather relevant information.

There was a large mounted tablet that was set up to let the driver know what cycle the engine was running on. The seating was far more comfortable than I had anticipated after the talk of body positioning etc.

It was as firm and body containing as a sports cars seat but with much more ease of entry and exit.

Driving the automatic transmission was surprisingly normal. It was impossible to tell when the engine was changing through the cycles although I did find that the transmission kept the revs higher than normal.

When slowing down and going into corners I did notice the transmission changed down by a gear at a time rather than dropping two or three at a time after heavy braking.

The lower torque availability is immediately noticeable when you pull away with smooth and excited acceleration.

Driving the six speed manual was much the same with no noticeable cycle changes, going up and down the gears was super smooth, I did notice that the engine rev’s were kept pretty high (there was no tachometer on either model).

I did play around with the gears and even when in too high a gear the engine still performed well and showed no sign of stuttering.

We were made aware pre-drive that there might be some knocking from the engine as it was still in its very early stages of development and this would be eliminated before production, I never noticed any on the half-hour drive I did with each vehicle which impressed me greatly.

Mazda have certainly turned the industry on its head, to manage what was once thought to be impossible has certainly set a new standard of fuel efficiency and low emissions.

Unfortunately we will have to wait at least a year to see it be introduced to the marketplace in 2019. 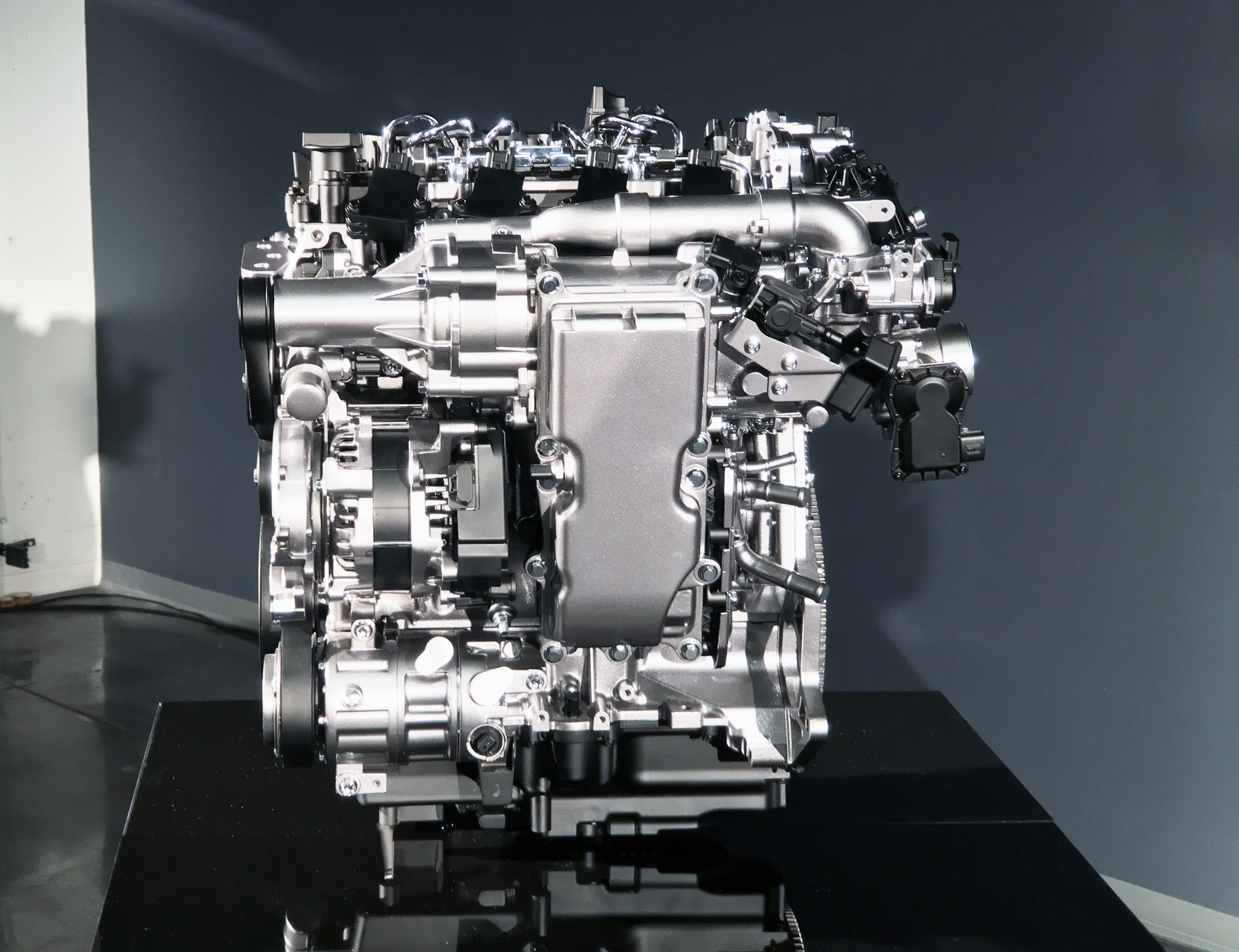 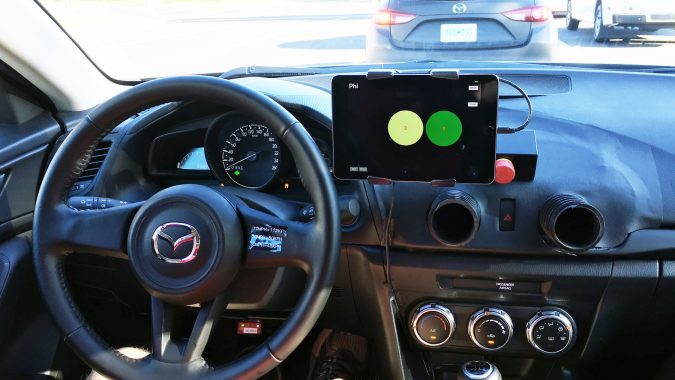