We had the opportunity to try Mazda’s battery-only electric motor package.

OSLO, NORWAY—Within the oil producing community, Norwegians are referred to as “blue-eyed Arabs” because like their Middle-Eastern colleagues, their local geography — the North Sea, in their case — produces massive amounts of petroleum and natural gas.

They also tend to be excellent business people.

So they sell a lot of their fossil-fuel resources to other countries, and with the money they make — and because it is a mountainous country with many rivers falling from great heights — they are building massive hydroelectric capacity.

A cynic (who, moi?) might suggest they are in effect exporting their fossil-fuel emissions.

Regardless, this has generated the world’s largest electric-car market, based on market share. Electrics now constitute about half of Norway’s new car sales, although the majority of those are to multi-vehicle families, with a mix of fuelled and electric vehicles.

Now Norway is a very urban country. Some 80 per cent of its five million-plus citizens live in cities, about one-fifth of that total in the capital, Oslo, alone. Not as many 600-kilometre round trips for a weekend as you might find back home.

And thanks to the Gulf Stream, Norway doesn’t get all that cold. Despite it being at the same latitude as the southern boundary of our Northwest Territories, Oslo’s winter temperatures are about the same as Toronto’s.

All in all, not a bad set-up for electric cars.

So when Mazda wanted a venue to show off their electric-car project, they chose Oslo.

Which also happens to be the world’s second-most expensive city to live in, next to Tokyo. There’s a LOT of money around here…

If you are familiar with Mazda’s corporate ethos — for example, they build an affordable sports car, the MX-5 (née Miata), when no one else thought such a thing was possible — you will not be surprised that the company is taking a different tack on electric cars than most of their competitors.

Rather than go for the biggest battery for the longest range — like the traditional zero to 100 km/h acceleration time, drive-it-’til-it-dies isn’t something electric car owners ever actually do, at least not on purpose — Mazda has chosen a path they say reduces total CO2 emissions over the entire life cycle of the vehicle.

Not just “well-to-wheel,” the common measurement cycle for emissions, but “extraction-of-materials-to-well-to-wheel-to-disposal/recycling.”

Their research suggests a smaller battery not only weighs less, which puts less stress on the rest of the vehicle’s systems — lighter is always better when it comes to performance, handling, braking and economy — but places less overall impact on the Earth.

To get that extra measure of range that some electric-vehicle owners might want some of the time, Mazda has continued development of the Wankel rotary engine.

The Wankel has always been unmatched in terms of power for its size and weight, but has had difficulty meeting emissions standards when it is the primary propulsion unit.

However, when operated at a more-or-less constant speed, as when it is used to power an on-board generator to recharge a vehicle’s battery, it runs “clean,” hence is a good fit for this application. Expect to see this in a year or two.

Meanwhile, we had the opportunity to try Mazda’s battery-only electric motor package. For our test, it was fitted into a modified, current-generation CX-5 crossover, the “modified” part being pretty much everything under the skin. 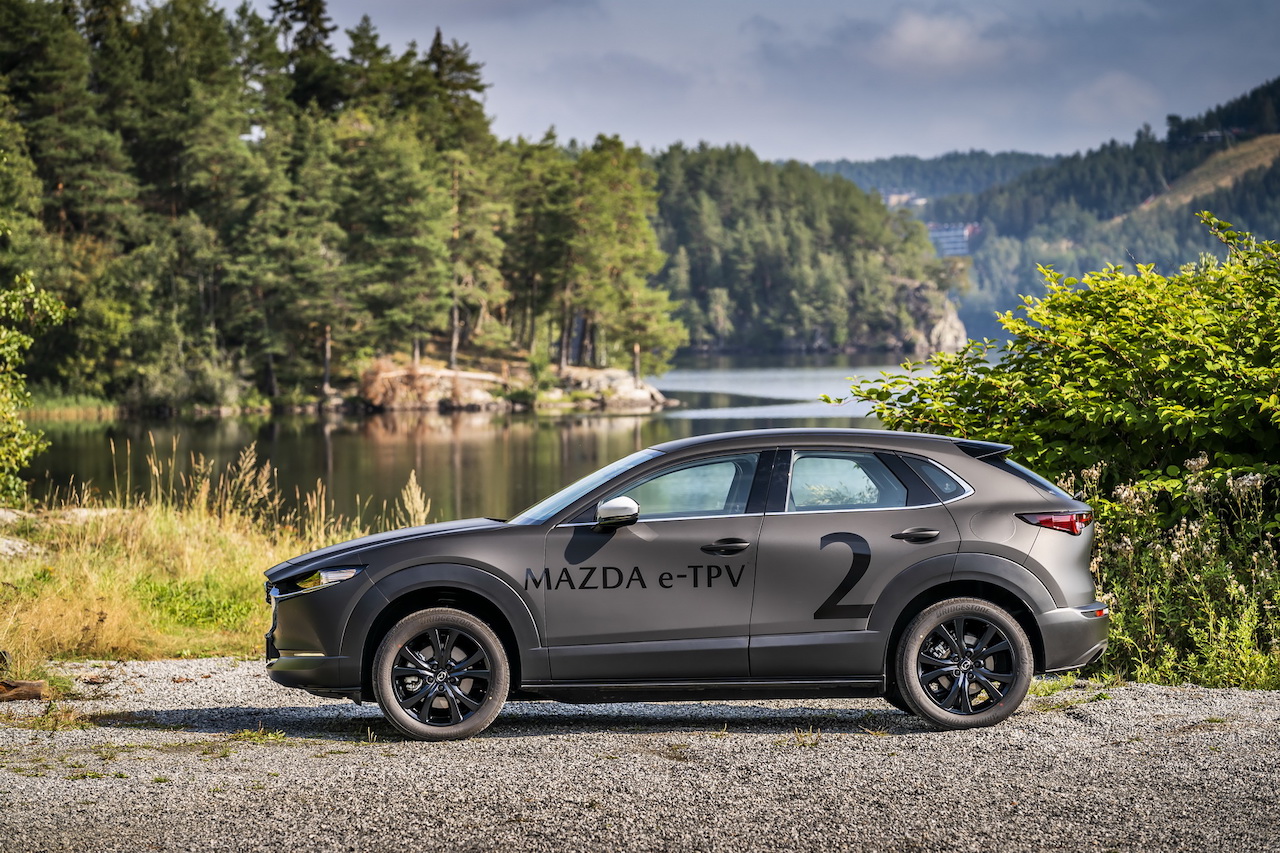 The AC synchronous motor develops 140 horsepower and 195 lb.-ft. of torque, compared to 187 ponies and 186 lb.-ft. in the gasoline CX-5. The lithium-ion battery is nestled into the undercarriage beneath the floor.

This combination will be in the first modern electric Mazda, due in some markets (not ours) as early as next year.

Joachim Kunz, in charge of vehicle testing at Mazda Europe’s R&D centre, told me that the objective for this powertrain was to make the car feel as “natural” as possible.

Now, there’s nothing “natural” about human beings going 100 km/h. I suggested “conventional” might be a better word!

He agreed, adding, “We wanted nothing strange, no jerking, no unexpected behaviour.”

On my test drive, which included mostly country roads and some freeway work, it indeed felt that way.

One characteristic of electric motors is that they develop maximum torque at zero r.p.m., so launch from rest is immediate.

But Kunz pointed out that they didn’t want it to be too brisk, at least not on initial launch.

Mazda has long been trying to make their cars react to inputs for acceleration, braking and cornering the same way as the human body reacts when we are walking.

For example, acceleration that is too sudden can cause our necks to snap back in an uncomfortable way.

So, they have designed the electric motor’s response curve to have a slight delay after pedal application, to give the neck muscles time to tense up and be prepared for the acceleration when it does come.

This is so momentary you cannot feel it — I guess I have to take Mazda’s word that it is actually happening.

What it does feel however is comfortable, so point proven.

This is all part of what Mazda calls “jinba ittai,” a Japanese phrase meaning “oneness between horse and rider.”

It is (apparently, I don’t ride anymore) that feeling you get when the car (or the horse) seems to react to your every whim even before you tell it what you want it to do.

Acceleration in the electro-Mazda from about 50 km/h on up is modest. It’s no Autobahn sturm-und-drang car, but you will be able to keep up with normal traffic.

There is considerably less engine braking feel than with most electric cars, again consistent with Mazda’s belief that the car should feel normal to most users.

That said, they do recoup much of the kinetic energy upon braking; it just feels less aggressive than it does in other electrics.

Mazda has done a lot of work with suspension and engine-management systems to make their cars handle better and more predictably than the competition. Even fairly unsophisticated drivers report on how good Mazdas feel to drive.

At least, partly to this end, the shift quadrant in our test mule, unlike some electric cars, was almost dead-nuts conventional. Park is forward and to the left. (OK, that’s a bit of a digression from usual practice.) Slide it to the right and back for reverse, back again for neutral, back again for drive. No low range on this one.

The car, otherwise, felt just like any other CX-5, so mission accomplished on that score.

Did this experience change my mind about electric cars?

I have always said that an electric motor is a fine way to move a car, and that there is a market for them, mostly for urban use, which is how Norway uses them.

Even with bribes from various levels of misinformed governments (which pretty much includes all governments), battery-powered electric cars will never amount to more than about a quarter of our market.

By the time they do, progress on hydrogen power should be far enough along so that its inevitability will become a reality. 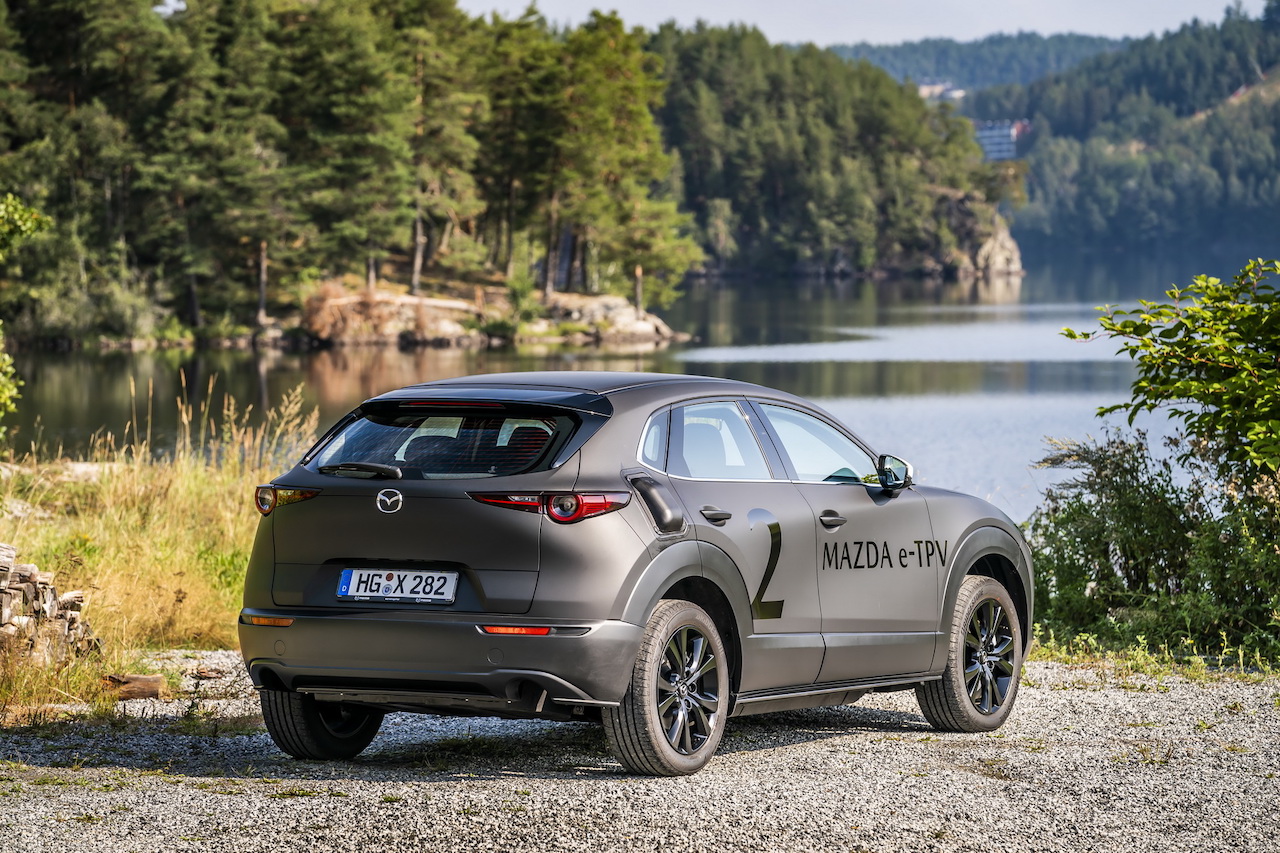