A longitudinal layout that works with a long inline-six are meant to make these big Mazdas much better to drive.

Join the Conversation (0)
Mazda wants to turn the crossover market by 90 degrees. By turning its drivelines around the same amount. The automaker is launching an all-new platform and going against what every automaker it competes with is trying to do. The reason? Jinba Ittai. The Japanese phrase describes the intuitive link between horse and rider, and Mazda said it guides how the company wants its vehicles to drive. This is how the new platform works and why it matters.

Why Mazda Wants to Move Upward

First, the why. We asked Joachim Kunz, Mazda's senior manager for product development and engineering in Europe the big question.

"We want to grow up-market," he said. "This is our direction, to become better. So, we need a flagship. A bigger car." A bigger car means a more premium car (and car means SUV).

Kunz is clear about his dislike for that word "premium," though, the word we commonly use when talking about brands in the middle like Lexus or Volvo. "In Germany, we do not have a direct translation for this word," he said. Instead, Kunz said Mazda wants "to be attractive for customers who are looking for 'the really good car' and not for the budget car."

Crucially for Mazda, moving up means driving dynamics better than what the company offers now. 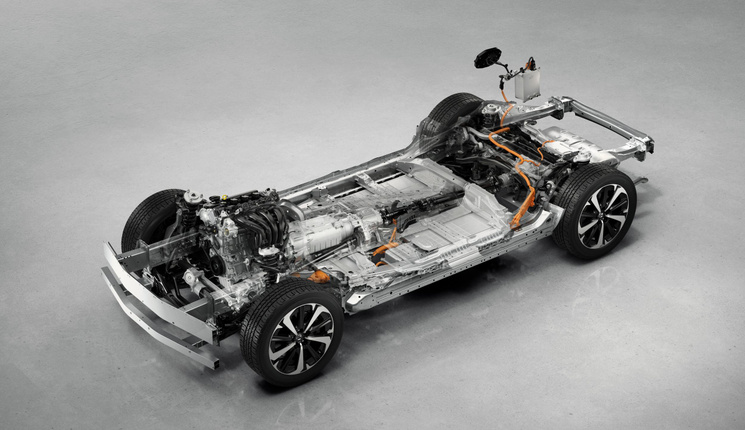 On a secondary path, Mazda was also working on new engines. Kunz said that Mazda knows full electrification is coming but thinks that it won't begin to ramp up until the later part of this decade. Leaving plenty of life ahead in the internal combustion world. Mazda isn't big enough to be at the forefront of the battery revolution.

Both paths independently pushed Mazda toward this new longitudinal layout large product platform. Where the engine runs north-south in the vehicle instead of east-west. This is the layout used by the likes of Mercedes-Benz and BMW, with most potential competitors putting the engine in transversely.

We've covered more about the new engine in another story.

A long inline-six can't fit transversely inside a modern vehicle. At least not easily, though Volvo tried it for about a decade starting in 2006. Cars with that layout are known for horrendous turning circles and with Mazda's desire to upgrade the suspension in this platform (taking up even more width) it would go completely against the company's plan to make "the really good car."

A family of inline engines makes electrification easier, but not if they're mounted sideways. Just like Mazda plans to do in the CX-60 (and the other models set to use this platform), if the engine is longitudinal, the six can be replaced with a four and an electric motor in a much more straightforward way.

One place longitudinal platforms fall behind is in cabin space. Putting the transmission between the driver and front passenger cuts into cabin width and tends to shed plenty of heat that ends up in the cabin as well.

New Transmission Solves Cabin Space While Improving Everything Else

A new in-house eight-speed automatic solves that. Instead of a traditional (and large) torque converter, a fluid connection like a turbine that sits between the engine and automatic transmission, Mazda here uses a wet multi-plate clutch. The clutch pack can slip to make start-off smooth, but after that remains locked, and we've covered more about the efficiency of the gearbox here. 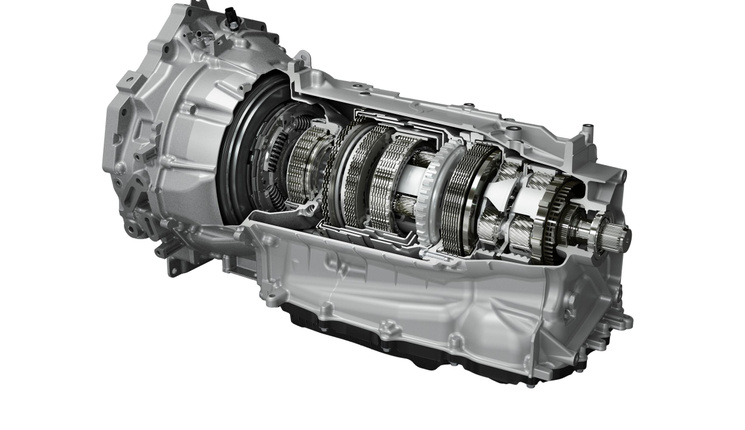 What's important as far as the chassis is concerned, is that ditching the torque converter makes the gearbox narrower. A narrow transmission needs less center tunnel space and that increases space for passengers in the front seats and prevents the slight sideways pedal box associated with FR chassis vehicles.

Why the Chassis Matters

Now the platform itself. "We hope to get drivers excited and energized about driving. And make them feel confident behind the wheel even when operating bigger-sized vehicles," said Mazda executive officer Hiroyuki Matsumoto.

A longitudinal engine layout benefits dynamic performance right from the start, by improving weight distribution compared with a transverse one. More of the weight of the vehicle is between the axles, improving balance.

Bringing the weight inside the wheels and closer to the vehicle's centre reduces the inertia of the heavy components. This helps stop the weight of the vehicle from acting against you when you're trying to steer, stop, or start. Like carrying groceries with your arms at your sides instead of trying to do it with your arms extended straight out. 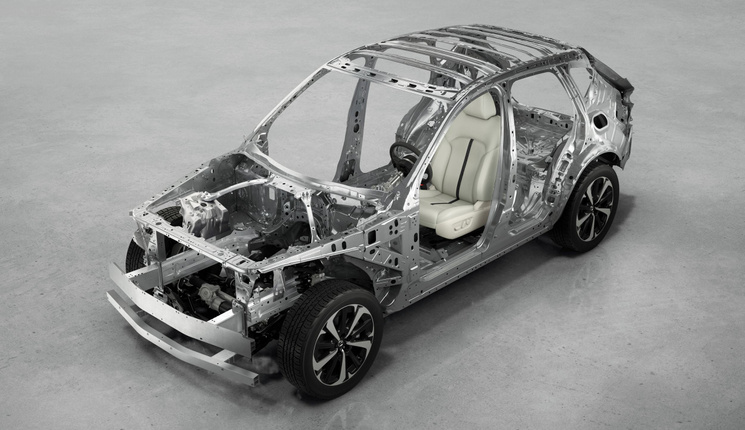 A transverse engine, often completely in front of the axle, acts like a pendulum when you're trying to turn and when the suspension moves up and down. The forces delay the time it takes for the steering to respond to your touch, increase dive when braking, and adds extra bounces over bad roads.

Mazda calls this a rear-drive platform because the design using a longitudinal engine along with Mazda's choice of AWD system hardware sends power primarily to the rear wheels unless there is slip. Transverse platforms send power primarily to the front wheels, so they have to balance cornering and engine torque at the same time. A rear-drive bias splits the load in most conditions, so the rear tires handle acceleration and the fronts the steering, leaving more available traction for each task.

Also important, the design reduces torque steer - the feeling of the wheel tugging in one direction under acceleration - and a loss of acceleration and traction when turning. That second one might not sound important, but it makes a large difference in everyday driving. Think about pulling out of a parking lot or driveway. The sharp change in elevation at the curb, along with the bump of sidewalk and curb, combined with acceleration, bounces the wheel and tire. That kicks in the traction control and it makes leaving a parking lot awkward and uncomfortable. Driving the rear tires separates the two actions, making everyday driving tasks easier.

Mazda's double-wishbone front and multi-link rear suspension systems work to take advantage of the new chassis balance. With a strut-style front suspension, the front and rear wheels work on a less-than-ideal axis, and not the same axis front and rear. Suspension movement up and down has a large wobble around that axis, which Mazda said increases how much pitch the occupants feel fore and aft and reduces suspension smoothness.

The new large vehicle platform lets both the front and rear wheels work on the same ideal axis, greatly reducing how much the suspension forces wobble around that axis. It greatly reduces the pitch felt in the cabin.

Instead of rotating in a circle backward and forward around a spot right in the middle of the rear seats, causing tipping, the new Mazda products will rotate around a virtual point well behind the vehicle. So from the inside, all motion should feel like a bounce straight up and down, not a rocking feeling in the front and a rotation in the back. In short, it's smoother.

Mazda claims testing found "more comfortable, joyful and rhythmical driving" with the new platform. Which means more "human comfort and joy." We're not sure what that means either, but importantly the charts show occupants were less likely to feel fatigue or carsickness. Perfect on long drives. 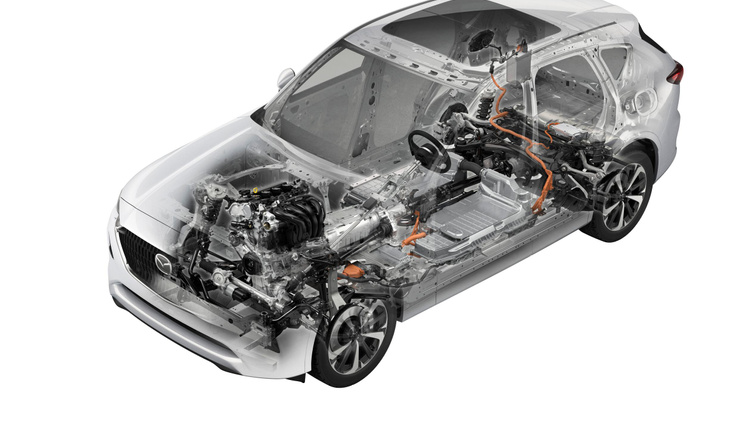 Like every new platform, it is stiffer than the model it is replacing. Clever use of aluminum diecast components in the chassis helps with that and also works to keep suspension noise and vibration from making it into the cabin. The material sends the sounds elsewhere. The platform was designed to withstand crash impacts beyond what is required to meet safety regulations, not surprising given Mazda's recent excellent performance with older models in brand new crash tests.

Lowering cabin vibrations and noise improves driver comfort, which is directly tied into how premium the new vehicles feel. Possibly more than cabin amenities and construction, even, at least while you're on the move.

Internal Combustion Not Dead Yet

So, while other automakers are halting ICE development and slashing platforms, Mazda is introducing a new family of both. Citing improved fuel economy, better driving dynamics and a better ride, and reduced costs in development and production. For a small automaker like Mazda, keeping costs down is crucial. So, what pushed it to this big decision?

Kunz said that Mazda Japan "had the perception that premium is something like luxuries. Or it's just expensive and it's impressive or something like that." It took bringing important decision-makers to Germany, to a region where driving dynamics matter, to drive the point home. Kunz describes the awe of a program manager from Japan after experiencing vehicles in these situations, rather than spending a commute in a traffic jam in the company's home of Hiroshima. 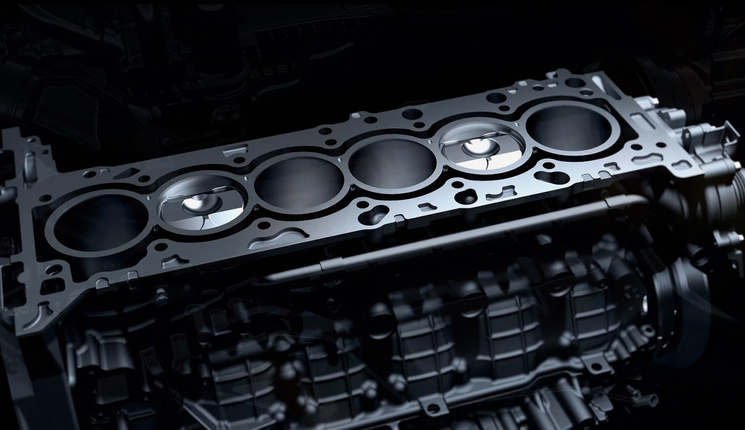 The new platform isn't all pluses and no minuses. Look at the hood of the CX-60 and one issue with rear-drive is immediately apparent. The very long hood is needed, but it pushes the cabin rearward and cuts into total volume. Short overhangs in the front, and the distance from bumper to axle, help with this, as does making the vehicle slightly longer overall. But Kunz is refreshingly blunt about the company's feelings in this direction.

"We have good package efficiency, but I would not say this concept is improving the package efficiency. If you are looking for maximum utility and not considering the best comfort, you might choose the front-wheel drive (layout)," he said.

Mazda said that with these vehicles it aimed to boost the experience for those who love to drive but also to add confidence for those who don't. Or who don't drive often. To make driving more enjoyable for drivers of all ages, abilities, and feelings toward the pursuit before they chose one of the company's vehicles. "If I asked which car you would like to have, without considering the pricing, we want the customer saying 'yeah, I'd like to have the Mazda,'" Kunz said.