The Continental name returns on Lincoln’s new full-size flagship sedan. It was introduced at last year’s New York Auto Show as a concept vehicle, and to its credit, the company designed the production version as close as possible to that handsome show car.

So that means you get the new signature mesh grille, LED headlamps, and electric button-operated door handles that are part of the chrome garnish wrapped around the windows.

There’s no word yet on all of the engine choices. Lincoln’s currently only talking about an all-new turbocharged 3.0-L V6 that’s exclusive to the brand.

The company calls it GTDI, for gasoline turbocharged direct injection, the same technology known as EcoBoost over at Ford. It’s expected to put out 400 horsepower and 400 lb.-ft. of torque.

The Continental’s default drive is to the front wheels, while an all-wheel-drive system will be available with the 3.0-L that can adjust torque between the left and right rear wheels for better handling on curves. The continuously-controlled damper system can be set for normal, sport or comfort, and automatically adjusts to the road surface for a smoother ride.

Since it’s a luxury sedan, it’s all about the cabin, and the seats can be adjusted up to 30 ways. That plethora of positions includes thigh supports that move individually, since the need to reach the throttle means that your legs are never in identical positions to each other. 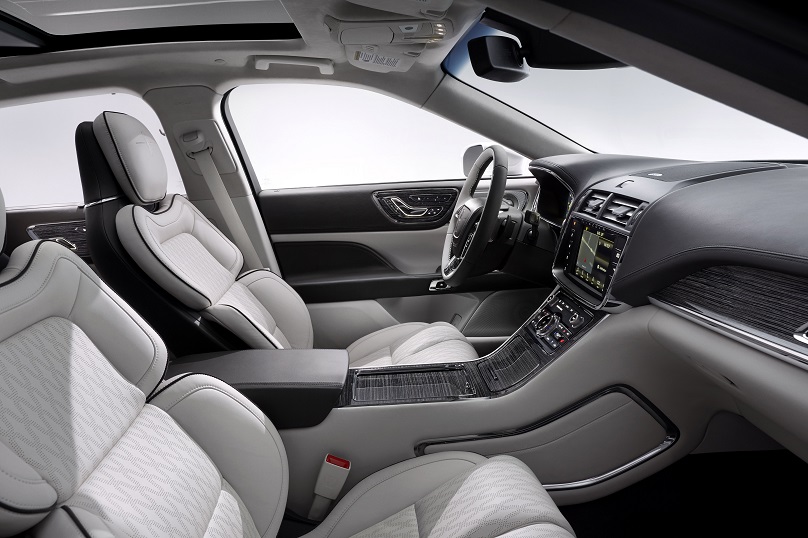 Naturally, the seats are heated and cooled, and can massage your back and butt.

Rear-seat passengers also get the full treatment, especially because Lincoln is aggressively moving into China: it opened 33 dealers there last year instead of the 25 it originally planned, and it intends to reach 60 stores by the end of this year.

It’s common in China for buyers in this segment to have a driver, and so those riding in the back get heated, cooled and massaging seats as well, along with sunshades, climate controls, and switchgear for the available Revel premium audio system.

Lincoln also rolls out all of its technologies in the Continental, including a pre-collision system that can identify pedestrians and brake when necessary, adaptive cruise control that can handle gridlocked city traffic, and a self-parking feature for perpendicular or parallel spots.

There’s also a 360-degree camera system that displays up to two metres around the car. The Continental will go on sale later this fall.

Freelance writer Jil McIntosh is a frequent contributor to Toronto Star Wheels. To reach her, please email wheels@thestar.ca and put her name in the subject line.