Thanks to generous incentives, electric vehicles — Nissan Leafs in particular — are commonplace in Oslo.

If Canada supported electric vehicles the way Norway does there’d be 20 times more of them on our roads — so commonplace, nobody would remark about seeing one.

That might be especially true for the Nissan Leaf: Norway’s policies have helped it to account for more than 10 per cent of global Leaf sales since the mid-size sedan was introduced in 2011, despite a population of just five million.

Of course, we don’t support EVs like Norway does, as became clear when Nissan invited a few reporters to see how things are done there.

Norway is, per capita, the world’s biggest EV market because it goes all out to make them attractive.

We’re talking here, by the way, about pure battery-electric cars: plug-in and conventional hybrids don’t get the same breaks.

Norwegian EV buyers are exempt from two taxes that otherwise make its vehicles among the world’s most expensive. They don’t pay the 25-per-cent value added tax. They also avoid the registration tax, which rises steeply with a vehicle’s weight, cylinder count, horsepower and carbon emissions.

The result: While EVs aren’t cheap, they’re no more expensive than internal-combustion competitors of similar size and power. 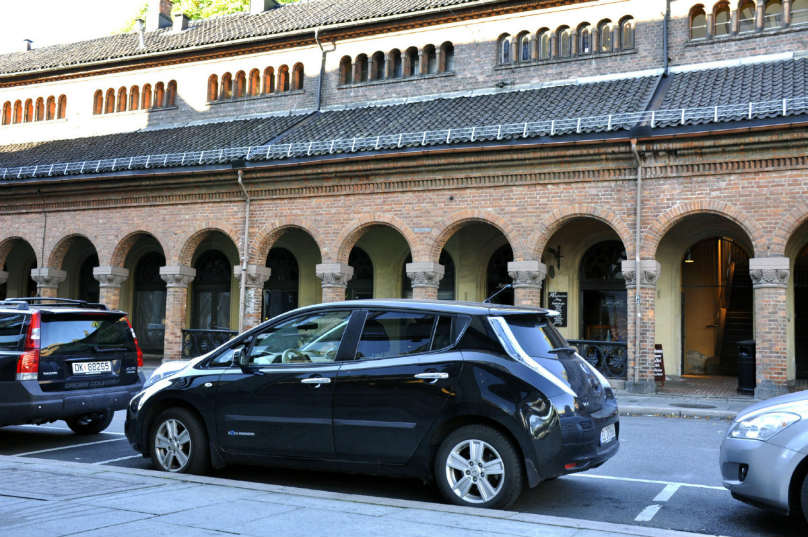 Beyond that, EVs get free parking in municipal lots, are spared ferry and road tolls, pay reduced annual road taxes and can use bus lanes. Free battery charging is available and if EV owners do pay for electricity, as when recharging at home, it’s 20 per cent the cost of a gasoline fill.

At the outset, Norway’s incentives were politically attractive: they let the government appear to boost both the economy and environment, but since expectations for EVs were low they weren’t expected to cost much.

But while Think tanked, others, including Nissan, brought in much better EVs and the use — and cost — of the incentives soared. By law, they’re to remain until 50,000 EVs are sold or 2018, whichever comes first. Total sales are now 35,000 and forecast to hit 50,000 by Easter — far sooner than predicted.

The special access to bus lanes may vanish when the law is reviewed — transit drivers complain EVs now impede their service. But the other incentives are likely to continue; too embedded in the economy to be withdrawn overnight. They’re also crucial to hitting Norway’s target of being carbon neutral by 2030. A strong environmental lobby — to which, perhaps shockingly to Canadians, the government listens — backs them.

And Norway, unlike Canada, makes oil companies pay appropriate royalties for the privilege of drilling. So it can afford the incentives’ annual cost, equivalent to about $405 million.

Ontario and Quebec support EV sales. So do several European nations, as well as the United States, Japan and, most recently, China. None, however, is near Norway’s generosity.

Norway’s incentives work, to a point: in a survey, only 16 per cent of EV drivers said they would have purchased their car without the tax exemptions.

But EVs still account for just two per cent of the cars on Norway’s roads, and only 13 per cent of new vehicle sales.

And the question remains whether the incentives simply transfer taxpayers’ money to those rich enough to afford these pricey vehicles. That’s less the case in Norway than here, since its incentives equalize the cost of internal combustion and battery power while ours simply reduce the hefty EV price premium.

Even so, the sales manager at Norway’s biggest Nissan dealership said most Leaf buyers are higher income, well educated and in management jobs. And they’re getting them to replace conventional second cars, used mainly for commuting and other local trips within battery range. So the market is still skewed toward the better-off.

The non-profit Norwegian EV Association argues, however, that battery power is essential if Norway is to meet its climate-change goals and the incentives are required to create a sustainable market for it.

The association wants partners in the effort: “Norway can’t make the shift on its own,” Christina Bu, its secretary-general, told the visiting reporters. “We need other countries to sell them, to get the numbers up and prices down.”

The message seems to be that incentives are required and that they must be — unlike those in Ontario and Quebec — generous enough to bring EVs within reach of mainstream buyers.

Canada seems a long way from that.

Transportation and accommodation were provided to freelance writer Peter Gorrie by the manufacturer.