Life beyond the scrapyard? How auto visionaries are reimagining car recycling

The billion-dollar business is being disrupted by voices advocating for better environmental practices.

Join the Conversation (0)
When you set up an auto-wrecking yard on the edge of an environmentally sensitive watershed, you can anticipate some pushback.

But when Ken Gold bought 11 acres of rural land in Scarborough north of the Toronto Zoo in 1979, he embraced the criticism and modelled his junkyard after a state-of-the-art automotive recycling centre, recognizing that the industry couldn’t continue to scrap cars the old way.

Junkyards have always stripped old autos of valuable items: tires and rims come off, batteries removed and drivetrains drained of fluids. What Gold introduced is a comprehensive operation to harvest components like starters and steering racks, cleaning them up and putting them on the shelf for resale.

“We realized the best thing we could do for the environment is reclaim components, catalogue them properly and offer them for sale to be put back into vehicles,” said son David Gold, who is president of Standard Auto Wreckers today.

Yet only about 35 per cent of vehicles that have reached the end of their service life are dismantled properly to extract all the recyclable materials, according to a report prepared for Environment and Climate Change Canada. 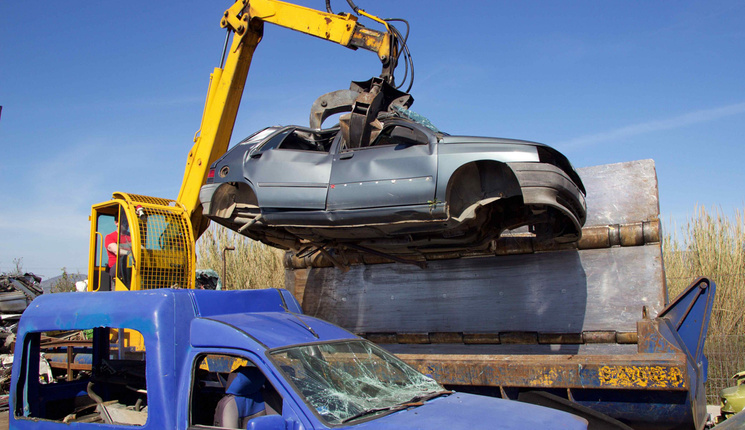 The remainder are crushed and shredded by metal recyclers, or shipped overseas to be put back on the road again. Despite representing a treasure trove of materials that potentially could be recycled into new products, end-of-life vehicles are not yielding as much as could be expected.

“Auto recycling measured as a percentage of the vehicle by weight that is reused has probably gone backwards in the last couple of decades,” said George Iny, president of the Automobile Protection Association consumer group.

“Notwithstanding the hoopla about coding plastics for sorting, very little has been done in North America to repurpose interior materials. It’s also the case for vehicles made of composite or plastic body panels like Saturn… none of which is easy to recycle.”

In Europe, there are “disassembly lines” that take apart vehicles to sort plastics and support their re-use. About the only plastics that are recovered from vehicles on this side of the ocean are polypropylene gas tanks and bumper covers.

“Soft plastics are really hard to recycle,” confirmed Karen Wirsig, plastics program manager at Environmental Defence Canada. “Textiles are tough to do, as are multi-materials. Yet plastic is a contaminant in every waste stream – it’s a real problem.”

David Gold concurs, adding that the cost to separate materials such as carpeting from the automobile interior is prohibitive and not worth the effort.

“Plastics, fabrics, foams are all shredder ‘fluff’ that is bound for landfill because the economics of it doesn’t make sense,” he said. Even an automobile’s electronic components are just not lucrative enough to harvest. “No one really goes after that stuff.”

“It shouldn’t come as a surprise,” said Iny. “Similar parts in our computers and phones are difficult to recycle and many end up in low-wage countries being recycled in environmentally unfriendly ways using solvents and heat.”

Precious metals such as platinum, rhodium and palladium found in catalytic converters, oxygen sensors and spark plugs are valuable enough to recycle. The demand for them is too high for mining operations to meet alone. Lightweight aluminum and magnesium components are prized, too.

Ultimately, it’s the hulk of the car that lends itself best to recycling. According to Gold, auto shredders have become highly efficient at turning old hatchbacks and pickups into raw metal for reuse. Some even incorporate “mini-mills” at the end of the line that churn out new metal rebars for use by the construction industry.

Despite the efforts to recycle, Gold said the best thing that could happen is wider acceptance of used components by the auto repair industry and even insurance companies, so that salvaged parts can be put back on the road instead of sent to landfill. He suggested that the tide may be turning.

“Dealers are calling us for components the car manufacturers can’t deliver due to supply-chain issues,” he said. Consumers who used to only be sold new OEM parts at the dealer are increasingly being offered off-brand parts and even used components to save money.

“Until recently, new aftermarket parts from China were priced so low that used was often not worth the savings. But that could be changing as transportation prices increase and supply bottlenecks lead to no inventory,” Iny explained. “A used OEM part may be of higher quality than some aftermarket new parts.”

Gold wants to see more cooperation and support from automakers when it comes to recycling their cars and trucks. He claims they’re not taking responsibility for their products at the end of their life.

“They don’t provide any information on dismantling their vehicles,” he said, adding that the kind of industry collaboration seen in Europe is absent in North America. “We’re working on a Right to Repair Act. Maybe it’s time for a Right to Recycle Act, as well.”

To that end, Stellantis – which assembles Chrysler and Dodge vehicles in Canada – has a plan to generate more than $2.6 billion in savings by extending the life of its vehicles and parts through its “circular economy” unit that loops production scraps and end-of-life vehicles back into the manufacturing process.

Some 4.5 million multi-brand parts will be sold in 155 countries under the automaker’s B-Parts e-commerce platform, while used, worn and defective parts will be dismantled and remanufactured to factory specifications. Stellantis will introduce its SUSTAINera label adorning parts and accessories made with up to 80 per cent less material and half the energy compared to equivalent new parts.

It’s a progressive move by a global car company, but Wirsig wants to see more being done to get plastics out of automobiles and out of waste streams.

“We need to see other materials used. Or use plastics that can be easily dismantled and recovered, such as single polymers,” she said.

According to a new report by Greenpeace, almost 95 per cent of plastic waste in the U.S. last year ended up in landfills, oceans or scattered in the atmosphere in tiny, toxic particles.