Wheels Editor Norris McDonald’s column about easing congestion on the Gardiner Expressway during rush hours resulted in a number of Letters to the Wheels Editor.

Here is a selection of letters received following Norris McDonald’s column published May 14 about how to ease gridlock on the Gardiner Expressway:

What a great idea…the best plan ever, but then it would have to pass City Council Traffic for approval, which would be discussed, discussed and discussed and then put on the back burner. I’m sure his worship would vote against it, though.

I hope the consulting gig goes well. Actually, the big money is in telling the city to go back to three lanes on that stretch of the Gardiner and closing the two entrances from Lake Shore. I’m happy to share the fees. I’ll send you my invoice. Why the city made that a dedicated exit lane I will never understand.

Great read and very true. The two biggest issues I see is no lane discipline and not leaving at least a car space between you and the guy in front.

I drive that stretch in my transport three-to-four times a week and have often wondered why people can switch between the Lake Shore and then just jump back on the Gardiner at the Ex. The cameras and the solid white line are good, although I am unsure it’s a ticketable offence to cross.

I would also like to see physical barriers to enhance the exit and entrance ramps to help stop “lane cheaters” from using entrance or exit ramps to get ahead of traffic. This is way too common and only adds to slow down traffic flow.

But just as we try to add rules and encourage enforcement, there are people willing to risk points and cash to beat them.

I live in the Parkdale area as many other people do. We don’t all work locally. In my case I commute to the 404/ Hwy 7 area. So why on earth would you close the entrance ramp at Jameson during rush hour? I suspect you don’t live in the city or realize how much business has moved out of the city because of rents, but much of the city around the Gardner is very popular to live in. Should we all move out and leave Toronto like a typical North American city? People in the city deserve access to the Gardner too.

Toronto, like all cities, always has a funding excuse up its sleeve as a convenient scapegoat for inaction.

“We just don’t have the money to do it” is the daily lament.

Gerrard Street East has been being dug up for the past two weeks. New water mains or new sewage mains or something like that; one- and two-foot diameter plastic pipes, turquoise.

Dump trucks, back-hoes, orange pylons (otherwise, how would we know we were in Toronto?), off-duty $98,000 cops earning a bit of extra cash for grocery money, or whatever. 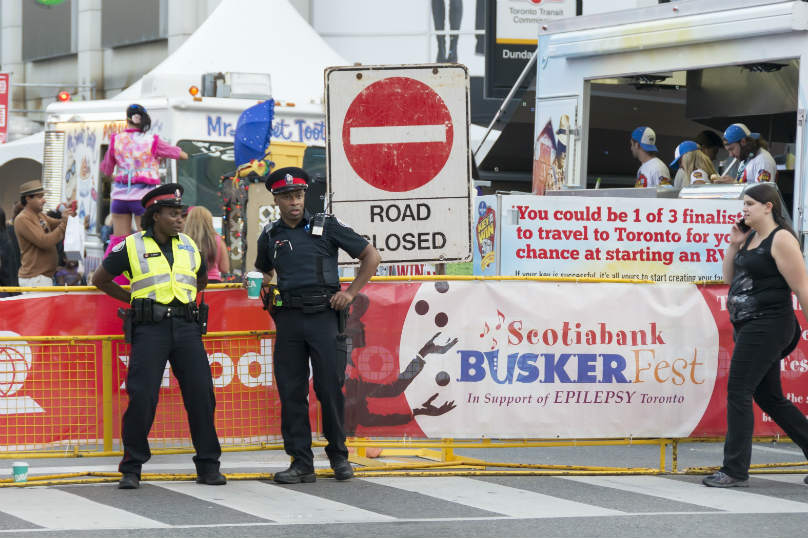 And now the news that once the roadway has been dug up and put back again, the entire street will be repaved. Closing the street for an entire year.

Disrupting local and through traffic for a year.

I walk through this street twice each day, 6 days a week. Work goes on about eight hours a day. That’s one-third of the twenty-four hours in a week. Five days of the week.

If we had two work crews and they each worked an eight-hour shift, we would be using 48 per cent of the available hours. In theory, the water-mains job would be finished in half the time.

Three shifts, working around the clock, would probably disrupt the sleep of anyone within a hundred yards of the site, but the job would be finished in one-third the time. That is, instead of having grit, dust, noise, honking traffic and so on for four weeks, it would all be over and done with in about nine days instead of an entire month.

Likewise, if work crews put in seven days a week (of course, they would be rotating in and out) and worked around the clock, the job would take less than a week to complete.

Arguments about “time and a half” and “double time on Sundays” are futile. We negotiate a blended rate for the span of the job (and/or other similar jobs like this) and just buckle down and get the job done.

There is no call for any worker to put in a sixteen-hour day, or a seven-day week. You work five days and then take two days off, or you stagger your days.

And yes, I know that on some jobs it is necessary to wait for the cake, cookies, or bread to cool before proceeding to the next step, but wait! There’s more!!

All that heavy equipment from bulldozers and backhoes down to air-compressors is sitting idle for 76 per cent of the time.

That means that Toronto’s capital is sunk into equipment that sits idle 76 per cent of its life.

That means that Toronto’s precious capital (see “We just don’t have the money to do it” above) is sitting idle for 76 per cent of its working life.

The word is “stupid.”

Paying you fifteen thousand is a bargain of a lifetime compared to the millions spent on city planners and politicians who can never get it right. And while your plan will have many agreeing with you, I live on Lake Shore W., west of Park Lawn, and you’ll beat traffic heading into the core every time by not entering Gardiner at the ramp just east of Park Lawn, but by continuing on Lake Shore eastbound and getting on the Gardiner just past Jameson where the Gardiner begins moving again. You can see the hundreds of cars at a standstill on the Gardiner looking to your left while you sail past them on Lake Shore. I’m sure a lot of people have figured out the quickest way to downtown goes like this; Gardiner, Lake Shore, Gardiner, off ramp. 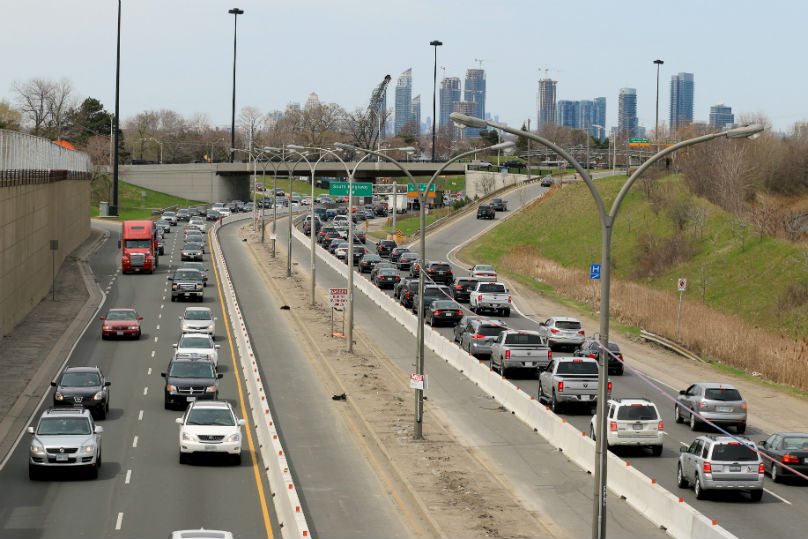 I read your column in yesterday’s Star regarding your proposed solutions to lessen the traffic issues on the Gardiner Expressway with great interest. I live in Markham and therefore am not often directly affected by the traffic on the western portion of the Gardiner. Nevertheless, like most motorists in the GTA, I am very interested in any ideas/ solutions which will lessen the traffic congestion anywhere in the city.

I would, however, love to hear your ideas about what could be done to improve the huge bottleneck where the 404 and the east and westbound 401 funnel into the three lanes of the southbound Don Valley Parking lot.

Another issue which I have followed closely over the years is the debate regarding what to do with the raised sections of the Gardiner which extend from Dufferin to Leslie. I agree that that section of the Expressway forms a barrier between the city centre/ financial district/ entertainment district/ distillery district and the water front. Many cities which have undergone a downtown revitalization/ beautification in the last few decades ( e.g. Boston, Chicago ) have taken full advantage of the important asset that their waterfront region provides to create a more beautiful, pleasing, and livable downtown core.

I believe most people recognize the impediment that the Gardiner presents to extending the city south to the lakeshore to take advantage of the potentially beautiful, natural setting. However, as someone who lives in the deep suburbs, I rely heavily on my car to get me in and out of the city to take advantage of everything Toronto has to offer. I am not interested in a solution which involves fewer routes to move/ improve the traffic flow or creates even more construction bottlenecks for years to come.

I have, however, had a solution which seems to make sense to me, which I have never heard proposed by anyone else. I have in the past emailed another Star columnist who has written regarding the Gardiner debate in the GTA section of your paper. I did not, however, receive a reply to my email. Perhaps you will have the time to reflect on my ideas and respond to why such a solution could not work.

I believe there are actually two barriers between the city centre and the lake front — the raised Gardiner/ Lake Shore Blvd. and the railroad corridor. The latter is not often mentioned because much of it has been either dropped below ground level or passes overhead. This corridor is quite wide and may present an opportunity. Why couldn’t the Gardiner be re-routed either above or below the railway tracks? One solution which has been proposed is to bury the Gardiner. But this has been criticized because tunneling would cost too much. Could this not be done more easily by “stacking” the tracks and the roadway one above the other, thereby reducing the number of barriers which exist? Perhaps both the railway corridor and the expressway can remain below ground level and be spanned by bridges, so that visually there does not appear to be any ground-level obstruction at all when travelling south toward the waterfront.

An added benefit to this proposal is that much of the work in the building of the new route could be done without any disruption to the existing expressway or traffic flow while it is being constructed.

I enjoyed your column this week about the Gardiner traffic and your solution. I have a similar suggestion which I sent off to my provincial MP last September since the 400 series highways are their responsibility. It’s no surprise that I haven’t heard anything further since I don’t think any level of government cares.

The solution for the exits which are like this, and there are lots of them, would be to have commuters get off at the exit before. As an example, on my way home each night, I go east on the 401 and exit at Morningside. If I am in the Express lanes, rather than taking that exit and fighting my way across several lanes, I always exit now at the Markham exit. That way, I have two or three kilometres to make my way to the right lane rather than having 500 metres to get across to the exit lane. If everyone had to do this, it would make for a much more orderly flow of traffic. My suggestion would be to move up every exit which is 500 metres or less from the express to the exit ramp for the city street.

Execution of this plan would mean changing the highway signs. In the above example, the exit for Morningside would move up one exit so that Neilson and Morningside are together (Markham would likely also move up one exit so it would be with McCowan and Brimley, assuming that McCowan doesn’t need to move up one). In order to stop drivers from continuing on to the next exit and still cutting across all the lanes, you would need to do something to prevent cars from using the old exit for Morningside. The cheapest method would be to paint the exit lane from the Express to the Collectors with a solid white line until just past the Morningside exit. This is what you suggested for the Gardiner. Needless to say, some selfish drivers would cross over the solid line as they do now at other places like exit ramps, so there would need to be enforcement. In my suggestion to the government, I, like you, suggested the use of cameras to enforce this.

Now, if only someone would listen to us!