It disappeared from American shores in 1998

The folks at Land Rover are deploying Monty Python levels of humour this holiday season by sending the image you see here directly to journalists’ perpetually overflowing inboxes.

A lantern-jawed SUV, wearing a camouflage pattern like those ships during the World Wars, is shown being unloaded from a cargo trailer. The company has been strongly hinting at a return of the mighty Defender line and the rig you see in this photo could very well be it.

Seemingly styled with a t-square, the machine seems to have a spare tire hanging off its rear cargo door, a styling cue making a comeback on SUVs targeted at the off-road set. The world’s suppliers of door hinges surely weep at this development.

It appears to be a four-door conveyance, a configuration that makes perfect sense given the demands of today’s market. The old Defender was available with either two or four doors, models called the 90 and 110 respectively. Those digits referred to its wheelbase measure in inches.

If it is indeed a new Defender, it’ll be the first one in about five years. Land Rover binned the historic nameplate in 2016 after a 67-year run (yes, you read that correctly). A big update in the 1980s imbued the Defender with some modern touches but it definitely captured a great deal of the original truck’s style and soul. It disappeared from American shores in 1998 after company brass decided not to put airbags in the thing.

Appended to the image is the date of December 27th and instructions not to unwrap until 2019. Land Rover hasn’t exactly been coy about the upcoming Defender, going so far as to parade around the UK in a camo-wrapped test mule with a freaking hashtag printed on its doors (it was #Best4x4ByFar, if you’re wondering). Like the old Defender, both two and four door models appear to be in the works for this new machine.

Cranking the speculation machine up to eleven, keep in mind this image was sent to us by the North American media team at Land Rover, seriously indicating the new Defender will be sold on this side of the pond. It makes sense to do so, given this market’s instantiable thirst for crossovers and SUVs. In Canada, Land Rover sales have been on a steady northward march, more than doubling in the last five years. Adding a Defender-shaped arrow to their quiver would serve to pad that number even further.

Like kids waiting for Christmas, we’re now counting the sleeps until December 27th. 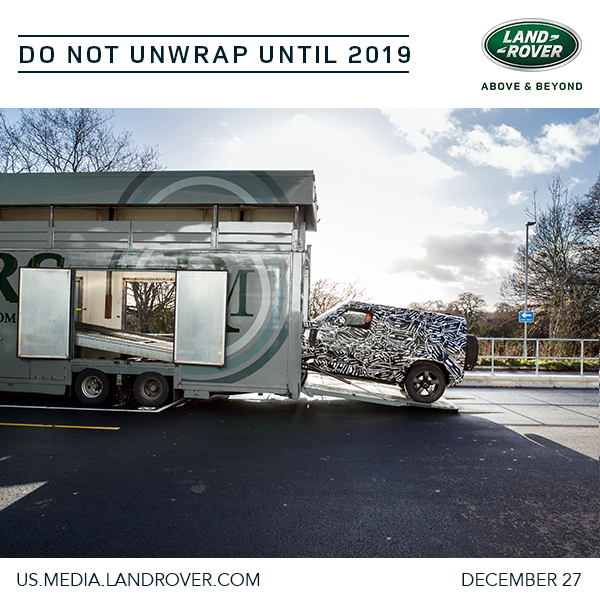