For thirty minutes I got to chat with Valentino about his passion for the brand and get some insight into the man behind the legendary mystique.

I had the pleasure of meeting a man who is synonymous with Lamborghini—legendary test driver Valentino Balboni.

For thirty minutes I got to chat with Valentino about his passion for the brand and get some insight into the man behind the legendary mystique.

Valentino Balboni was in town at the invitation of Lamborghini Vancouver to participate in the annual Diamond Rally, which sees over a hundred supercars driving up the majestic Sea to Sky highway to the winter resort of Whistler. I drove drive the Diamond Rally in 2014 in a white Aston Martin Vanquish so I knew what Valentino was going to experience and it turns out this was Valentino’s first visit to Canada and Vancouver was his first city, so heading up the Sea to Sky highway in a convoy of supercars was a perfect welcome to Canada.

Lamborghini Vancouver organized a charity auction for Wounded Warriors of Canada with Valentino Balboni as a special guest, the Thursday before the rally.  When I found out this was happening I immediately contacted them to ask if I could get an interview with Valentino. Natalie Rossiter the marketing manager at Lamborghini Vancouver very kindly invited me to the event and arranged for an opportunity to talk to Valentino before the auction got underway.

Sitting down with a Legend – Giorgetto Giugiaro 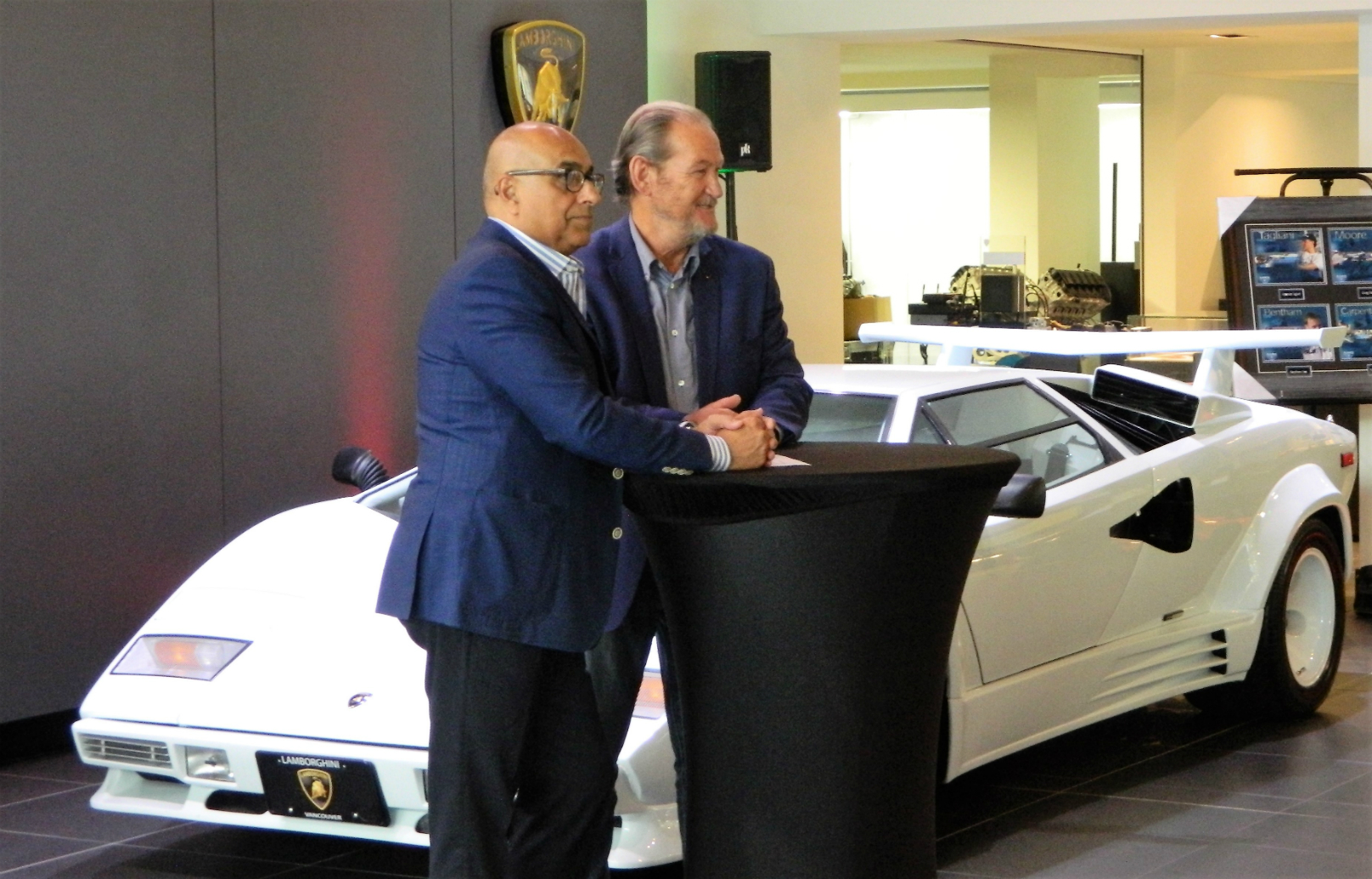 My wife will tell you I was giddy with excitement at the opportunity to meet Valentino. In person he is a charming gentleman who always seems to have a smile on his face and is brimming with passion for Lamborghini and cars in general. He wears the aura of a legend very lightly.

At the heart of Valentino’s love for Lamborghini is the Miura, an iconic design that has stayed the test of time, but also reflects the times in which it was made. Valentino commented on the changes between the past and modern era, “with the Miura you had 2 or 3 guys making decisions on the car based on experience and good sense. Today you have 30 or 40 people in meeting to decide on a seat.” As he says times change and so has the role of the test driver. The early Lamborghini test drives in the Miura and the Countach placed more emphasis on the test driver finding out what was wrong with the car. The first few iterations of the Countach had notoriously small brakes to try stopping a supercar capable of going 185mph. 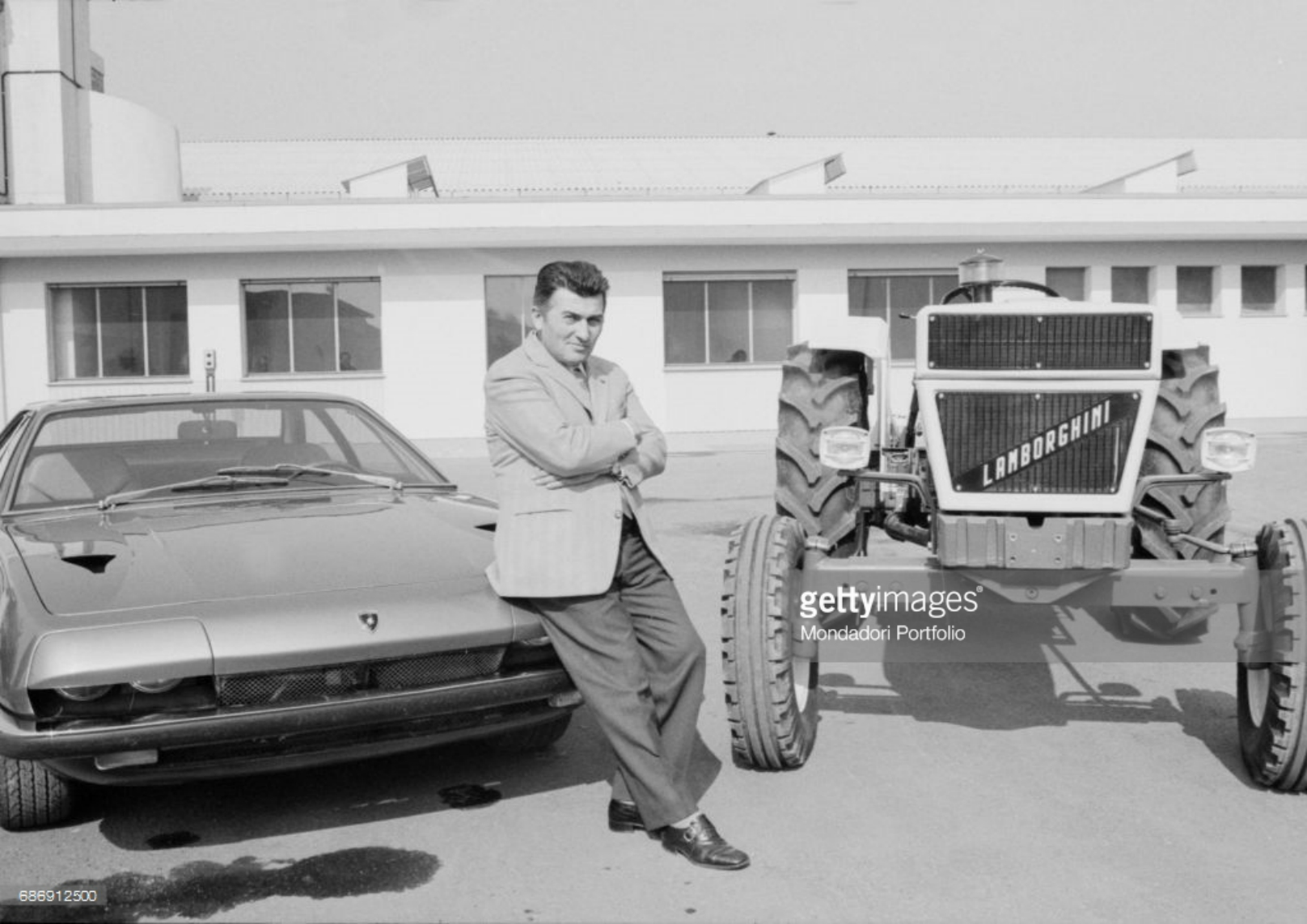 Valentino only had one major car accident in 1978, in a Countach at 160km/h, when a truck driver inadvertently drove into his path. Fortunately both Valentino and the truck driver were unharmed, as Valentino puts it, “You have to be lucky.” You learn and what you learn today and you apply it tomorrow.” Testing out in the world at speeds brought Valentino naturally into contact with the Italian police. He said he did get a few speeding tickets, but not many. In the 1970’s and 1980’s Valentino would test Lamborghini’s on country roads in the middle of nowhere; “It was a different life. Today you have more traffic, laws, you have to be careful.” I asked if the police ever turned a blind eye to his driving and he said yes especially in the area around Sant’Agata, where “we knew each other.” 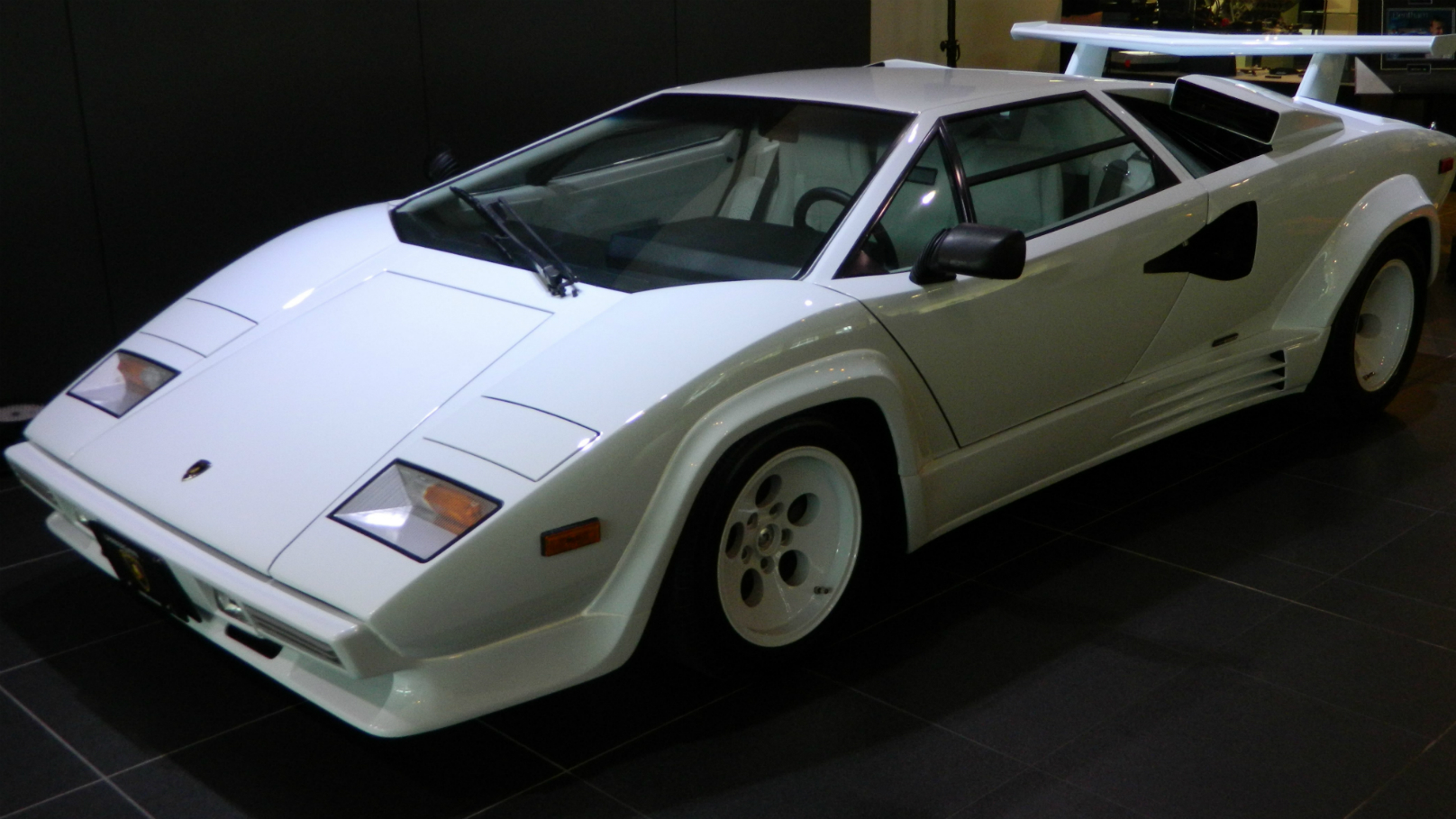 Turning to more modern Lamborghini’s, I was curious if Valentino had driven the radical Lamborghini Sesto Elemento of which only 20 were built and only for use on race tracks. He drove some of the early prototypes before moving onto other projects. The Sesto Elemento was a research project for combining the chassis with carbon fiber which has paid dividends on the Aventador, Huracan and the Huracan Performante. In Italy Valentino drives an orange Valentino Balboni 550 which has over 50,000 well used and enthusiastically driven miles on the odometer.  Valentino is very much a proponent that supercars should be driven, whether it’s a $2 Million Miura or a $350K Huracan. He is also keen on colorful cars, “A black Miura or black Aventador does not enable people to understand the car.”

I am in complete agreement with his philosophy.

The development of carbon fiber at Lamborghini began under the aegis of another motoring icon, Horacio Pagani, who worked for Lamborghini before setting up his own supercar company. I asked Valentino about his relationship with Horacio and to my surprise he said before coming to the event he had been on the phone with Horacio telling him he was coming to Lamborghini Vancouver which is also a licensed Pagani dealership. Part of me wanted to ask him to call Horacio Pagani back, instead I told Valentino about my own driving experience with a Pagani Huayra last year. 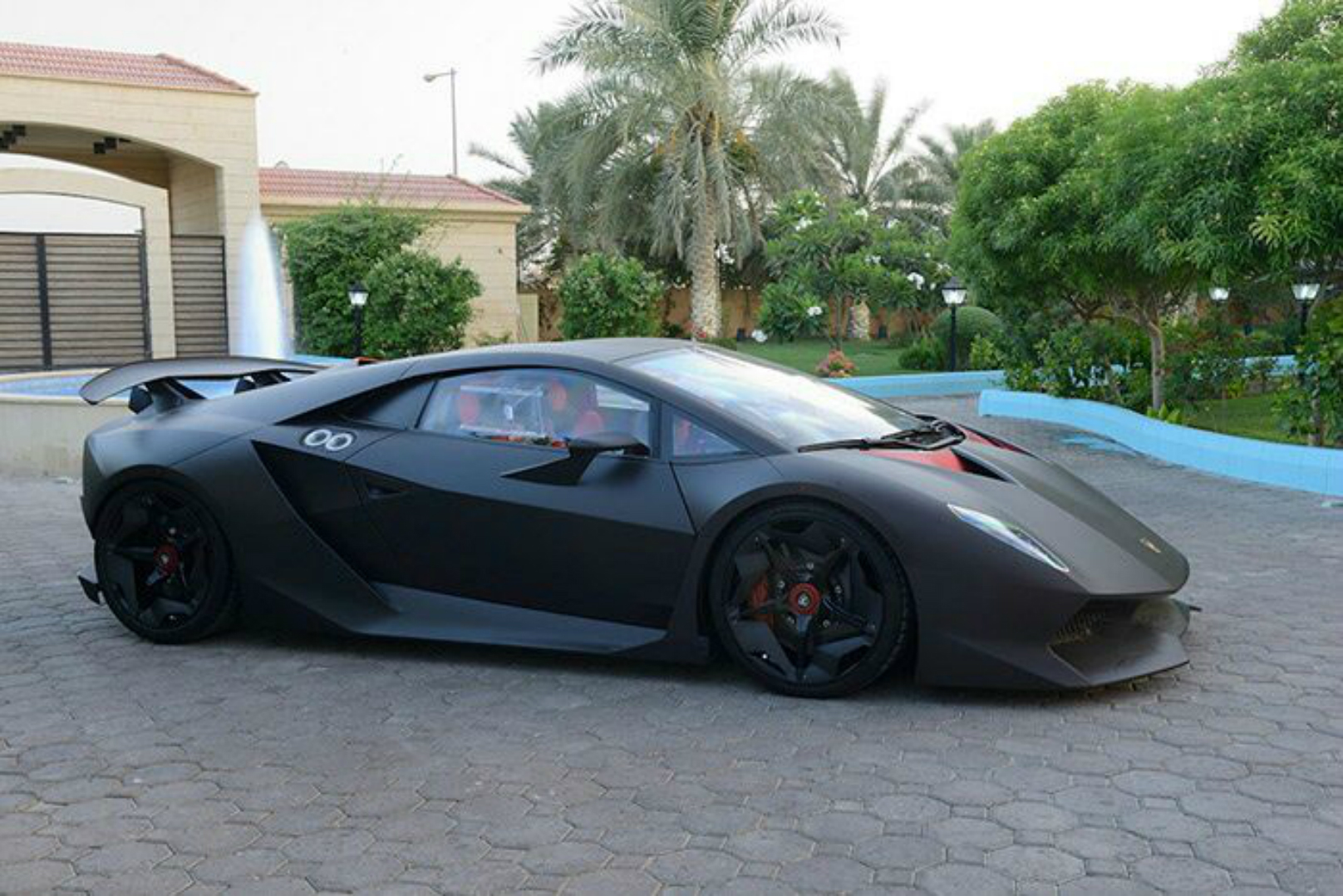 Valentino then volunteered a small story about Horacio during their time at Lamborghini. After Chrysler bought Lamborghini a series of building renovations forced Horacio and Valentino to park in a parking lot some distance from work so they would walk into work together. Every morning Horacio would bring out a piece of paper with some new part he had designed the night before, a front bumper, a new panel, he was as Valentino puts it “a maniac on design” which reflected both his temperament and his character. Naturally Valentino has driven many of Horacio’s Pagani’s bejeweled creations and counts Horacio as a good friend.

Lamborghini – The Man, the Myth and the Legend

Even legends have their heroes and for Valentino it was the 3-time Formula One World Champion Ayrton Senna who he met by chance at the Imola race circuit. I love these small little anecdotes. It  turns out 3- time World Champion Nelson Piquet who was a friend of Senna’s was interested in acquiring a Lamborghini Countach and Valentino brought one to Imola for him to drive and in the process met Senna.  Valentino is a Formula One fan, so it was slightly surreal talking to Valentino about Fernando Alonso missing the Monaco GP and going to race in the United States in the Indianapolis 500, for a moment we were just two race fans talking about racing.

What I will take from my time with Valentino is his overwhelming passion for driving, for him, every day is the first time. This is a man who by his own admission has driven between 50% to 60% of all production Lamborghini’s, and the man who invented the method for reversing Lamborghini’s by sitting on the door sill.

It was an absolute joy and privilege to meet and spend time one on one with this charismatic motoring legend. Thank you Valentino for sharing your passion.