Kia has pledged to improve average fuel efficiency from 25 per cent over 2014 levels, while replacing 70 per cent of the current engine range with more efficient units.

NAMYANG, South Korea: With the Paris summit on climate change now ongoing until Dec. 11, it is incumbent for everyone to focus on saving the planet, and that includes automakers.

While other major polluters such as airplanes, diesel locomotives and cargo ships go largely unregulated, the auto industry has been working on going green for years and one of them is Kia.

To that end, Metroland Media/Wheels.ca was one of only three Canadian media outlets invited recently to a Kia’s e-Mobility Workshop for two days of insight into what the Korean company is doing.

At the workshop they announced a five-year plan that includes green car models to grow from four to 11 in 2020 and have a hydrogen fuel cell vehicle in production by then as well.

More to the point, Kia has pledged to improve average fuel efficiency from 25 per cent over 2014 levels, while replacing 70 per cent of the current engine range with more efficient units.

They will do this with a (US)$10.2 billion investment in developing a whole new range of eco-friendly vehicles, creating more than 7,300 jobs along the way.

Part of the workshop was a chance to drive three of the cars Kia will be bringing to market next year with the focus on driving green.

The most exciting is the Niro Hybrid Utility Vehicle (HUV) that we will see in the last quarter of 2016. 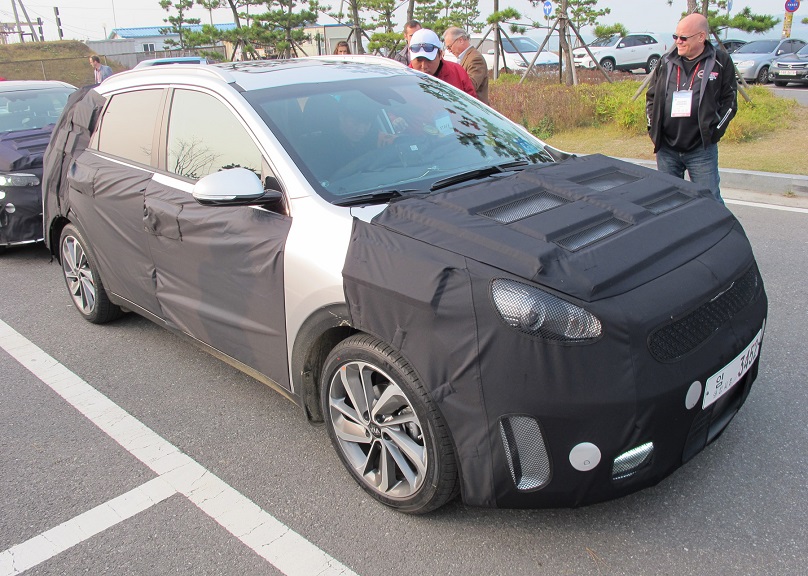 It is Kia’s first dedicated hybrid, meaning it is a stand-alone model, not a current car converted to hybrid use.

On a platform shared with no other Kia model, the Niro we drove was heavily covered, so photos could not reveal what it looks like. It is a five-door and CUV-like, but a little smaller than a Toyota Prius v.

It combines a 1.6-litre direct fuel injection four-cylinder engine with 105 hp and 108 lb/ft of torque with a 32 kV electric motor and a 1.56 lithium polymer battery mated to a six-speed dual clutch transmission.

Driving on normal roads along the coast south of Kia’s Namyang R&D complex, the Niro was not just quick, but fast, with my co-driver agreeing power felt like about 200 hp.

The big thing was the average fuel consumption of 5.8L/100 km we achieved.

With the interior also heavily netted to discourage photos, the back seat and cargo area were larger in appearance than a standard compact CUV and much like the current Rondo people mover.

This is partly because the polymer battery pack can be formed to fit beneath the floor rather than upright behind the second row seats, as in most hybrids. 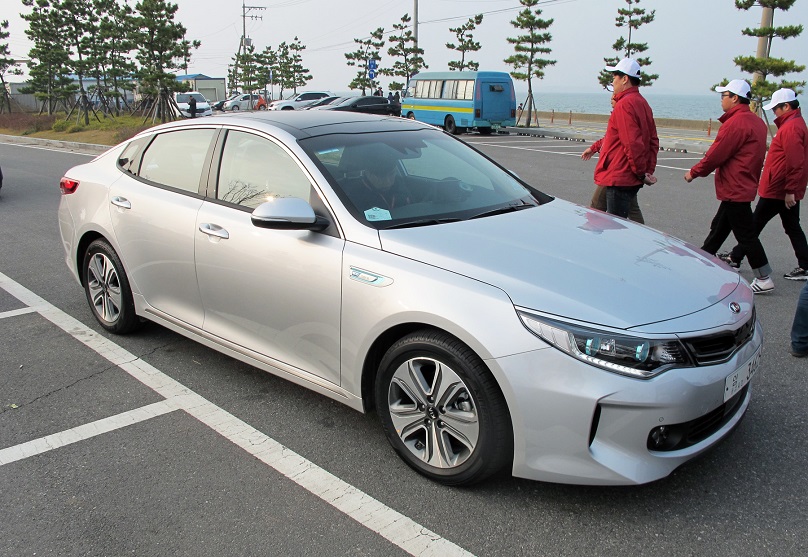 Both share a 2.0-litre direct injection four-cylinder with 154 hp and 139 lb/ft of torque and a six-speed automatic transmission driving the front wheels.

Interestingly, the Hybrid, which arrives early next year, was unmasked but the plug-in, which comes mid-2016, was heavily covered in thick, black shrouds.

The major difference between the two is the Hybrid has a 51 hp electric motor, while the plug-in gets a stronger 67 hp motor putting out 193 hp and 202 hp respectively.

Despite its smaller motor, the Hybrid is a full 42 per cent more powerful than the outgoing model.

Out on public roads the plug-in felt decidedly faster, especially off the line thanks the torque of the bigger motor.

We drove in a convoy with Kia personnel driving the lead car who set a pretty hot pace hitting 140 km/h several times.

Despite that, we were able to keep up on battery alone, as long as the road was flat.

The other plus of the plug-in was a range on electric only of 43 km and a recharge time with a 220-volt system of just three hours.

Kia already has an all-electric car, the Soul EV, which you can buy right now here in Canada, by it is obvious Kia is vaulting over that to produce a commercially viable hydrogen fuel cell vehicle by 2020, with the initial target of 1,000 sales per year.

Kia is currently working with no less than 300 partners on its next generation fuel cell, focusing on a fuel stack that is about the same size as its current 2.0-litre four-cylinder engine.

The target is to make it five per cent more efficient than the current models being tested in 40 countries around the world.

The goal is to have 10 per cent better stack performance and 15 per cent lighter for a projected range of more than 800 km and a top speed around 170 km/h.

And there’s more, such as autonomously piloted vehicles, but it is evident Kia knows it has a duty to drive into a greener tomorrow.