The new Wrangler 4Xe will come with Jeeps already proven 2.0-L I-4 turbocharged engine that is assisted by two electric motors that are linked to a 17 kWh battery pack that produces a combined output of 375 hp and 470 lb-ft of torque.

Just in time for its 80th anniversary Jeep have announced the introduction of a brand-new drivetrain to their iconic Wrangler line up.

The Wrangler 4Xe will be the first Jeep to benefit from a plug-in hybrid system that will now make it the most technically advanced and eco-friendly Jeep ever without sacrificing its legendary off-road performance.

The new Wrangler 4Xe will come with Jeeps already proven 2.0-L I-4 turbocharged engine that is assisted by two electric motors that are linked to a 17 kWh battery pack that produces a combined output of 375 hp and 470 lb-ft of torque. An eight-speed automatic transmission puts power down to the wheels via a full-time 4×4 high and low ratio transfer case. The electric/gas combination gives an estimated fuel economy of 4.7L/100km (50 mpg).

The 400-volt, 96-cell, battery pack, is neatly tucked under the rear seats and produces enough power for the Wrangler to run on full electric power for up to 40 km. The battery is fitted within the cabin to ensure it is protected during severe off-roading and deep-water fording.

There are now two clutches that manage the power and torque from the electric motor and the engine. When the binary clutch, mounted between the engine and motor is open, the engine is disconnected from the drive train allowing the Wrangler to be driven using electric power only. When the clutch is closed power is produced from both the electric motor and engine that combine to flow through the eight-speed transmission. The other variable clutch is mounted behind the e-motor and controls power transfer to the transmission that improves efficiency and handling. 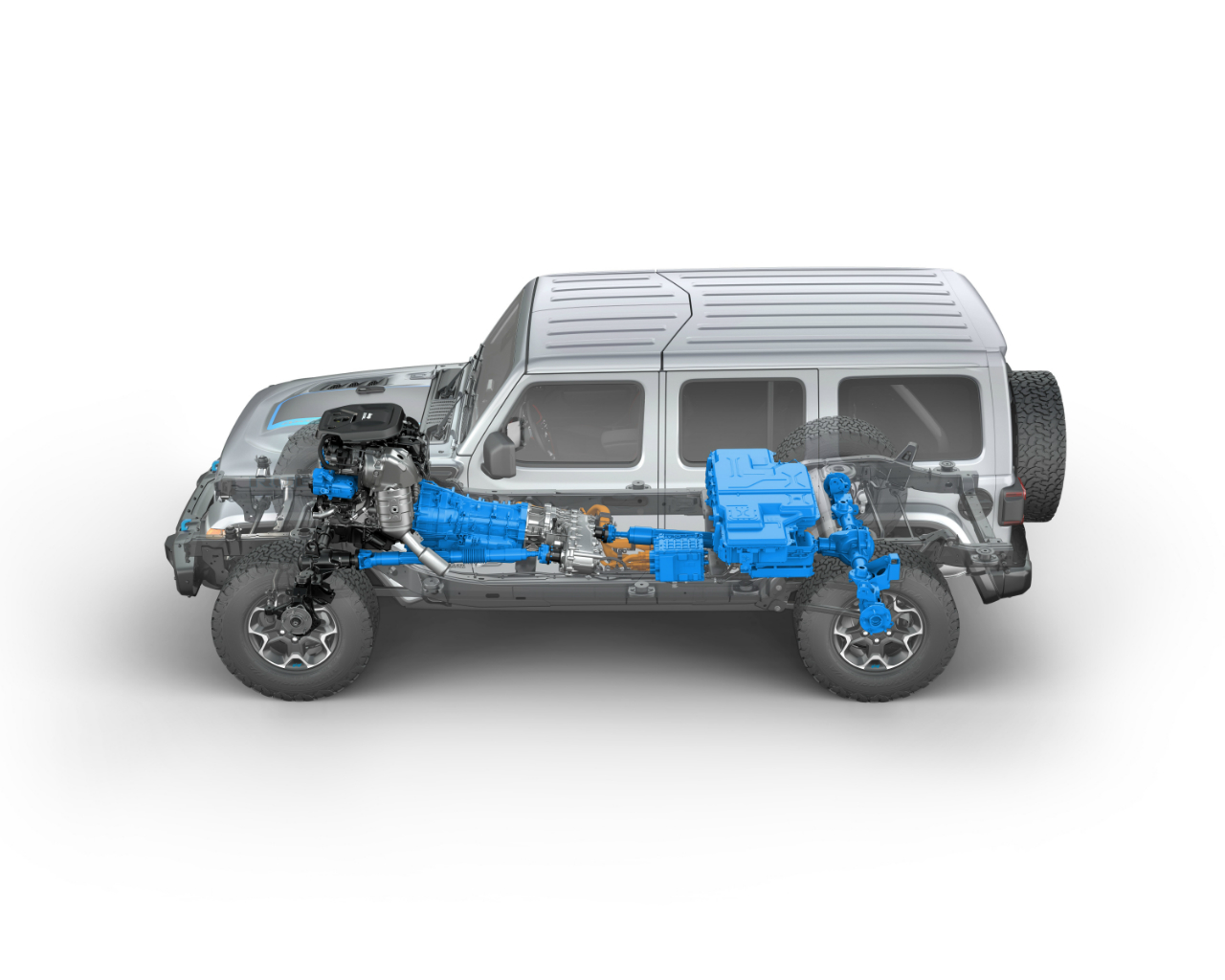 The Wrangler 4Xe has three E Selec drive modes that can be selected to best suit the driving conditions.

Hybrid: Is the default setting that combines the power from both the engine and e-motor. The power train will utilize the battery power first and will then switch over to engine power as the battery pack becomes depleted.

Electric: All power being supplied to the powertrain comes from the electric motor allowing the Wrangler to run on electric power only, but when more torque is needed the engine will kick in adding extra power.

eSave: The Wrangler will run on power produced by the engine saving the electric power from the battery pack until it’s needed at a later stage.

The driver also has the option to choose between battery charge or battery save and is controlled via the Uconnect monitor.

The Wrangler has lost none of its off-road capabilities and actually benefits from available 100 per cent low-end torque and the ability to drive in silence on and off-road.

Christian Meunier, Global president of Jeep Brand -FCA commented, “Our Jeep 4xe vehicles will be the most efficient, responsible, and capable that the brand has ever created. We are committed to make Jeep the greenest SUV brand. The electrification of the Jeep lineup will allow commuters to travel solely on electric power, delivering an efficient and fun on-road experience and offering an ability to enjoy even more Jeep capability off-road in nearly complete silence.”

The Wrangler is the first of Jeeps 4Xe badged vehicles to be released in North America and Canada and will be available early next year. It will be joined by the Renegade 4Xe and Compass 4Xe that were introduced to the European market earlier this year and should be made available around the same time.