Jeep Grand Wagoneer Concept is a Blast from the Past

Jeep has leaned heavily on the original Grand Wagoneer’s design and luxury personae for this latest version of the Grand Wagoneer Concept vehicle.

Jeep announced today that it is taking aim at the full-sized premium SUV market with a sneak peek at its latest concept the Grand Wagoneer.

The Wagoneer, first introduced 58 years ago, was the first 4×4 vehicle to have an automatic transmission fitted – basically becoming the first modern SUV as we know them today.

In 1984, The Grand Wagoneer was launched. It brought to the table a sophisticated look and feel that included leather upholstery, air conditioning, a stereo radio and added insulation to keep outside noises at bay.

Moving forward to today, Jeep has leaned heavily on the original Grand Wagoneer’s design and luxury personae for this latest version of the Grand Wagoneer Concept vehicle.

On first glance, Jeep has not cut any corners with the external or internal design and have definitely taken aim at the other full-sized SUV luxury brands.

While the exterior marks a big departure from the original Woody Wagoneer – as well as most of today’s modern Jeeps – it is still recognizable as a Jeep. A futuristic front grill still conforms to Jeep’s iconic seven slot design, but is shallower and flows into the slim LED projector headlights at each end. Each slot is individually lit adding another dimension to the iconic grille.

The Grand Wagoneer certainly fits into the full-sized SUV category. The 24-inch Obsidian-finished aluminum wheels make it appear much taller, adding to its already large silhouette.

“Grand Wagoneer” is emblazoned on both front doors in aluminum letters with copper accents and is flanked by an American flag to pay homage to the truck’s home country.

Noticeably missing on the exterior are the iconic wooden panels associated with the Grand Wagoneer, but the Jeep’s interior designers have certainly made up for it with the wood trim accents in the interior. 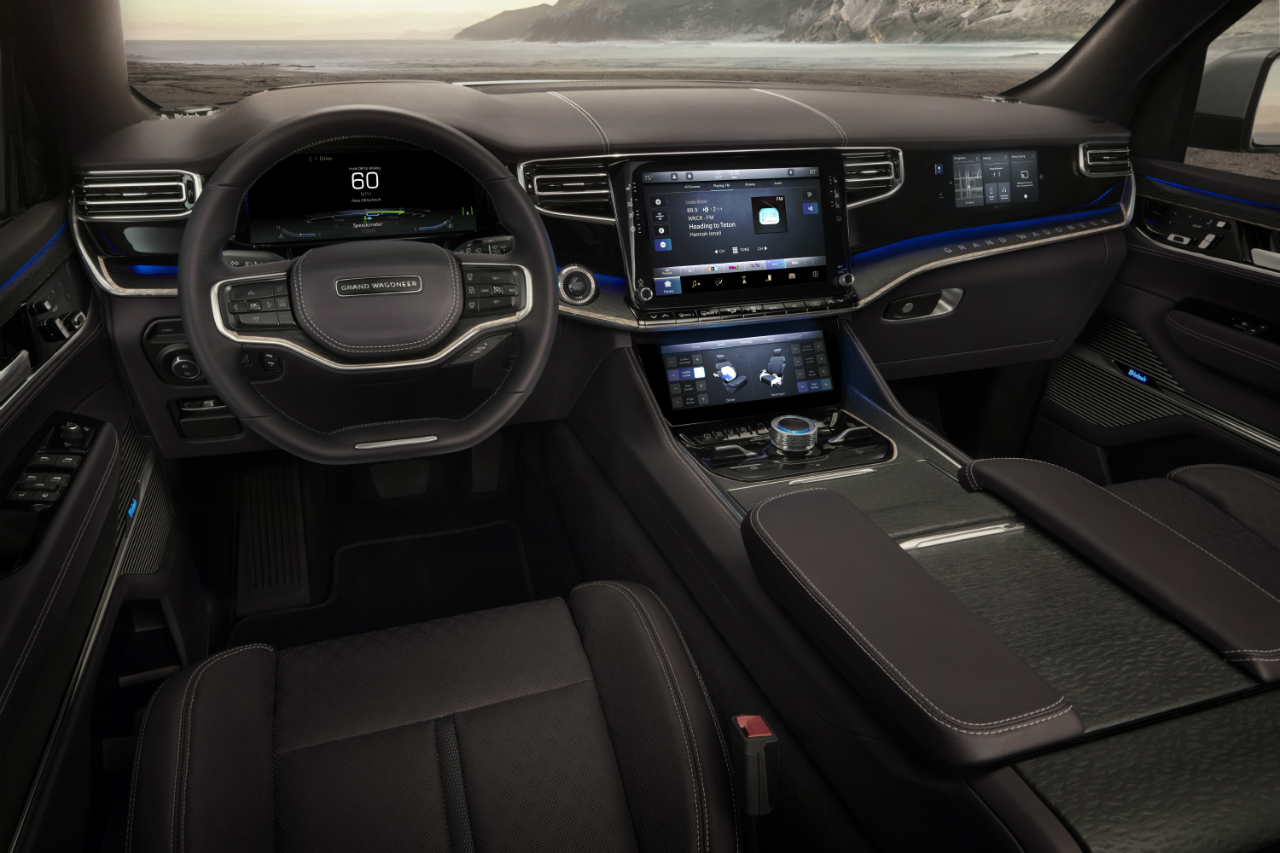 The cabin is simply exquisite, with keen attention to detail and use of only the finest materials. A third row has now been added that slots behind the two mid-row captain’s chairs giving more than enough space for all seven passengers. The already cavernous interior gains extra light from the full glass roof panel that adds yet another layer of spaciousness.

The level of technology in the cabin is taken up a notch with both mid-row passengers getting 10.5-inch personal infotainment touchscreens with a 10.25 climate control screen mounted between both captain’s chairs. The front passenger is not left out either as they get their very own 10.25-inch touchscreen that has been developed so that it cannot be seen by the driver when the vehicle is in motion.

The driver has a 12.3-inch dial display as well as a 12.1-inch main display screen mounted centrally, with another 10.25-inch horizontal climate control screen mounted below. The total screen area on the dash is an incredible 45-inches with the second row getting an equally impressive 30-inches of total display area.

The Grand Wagoneer’s audio system is powered by McIntosh – the only vehicle in the world to have this distinction.  It comes with 23 custom designed speakers that run through a 24-channel amplifier that ensures all passengers are equally encapsulated by the superior sound produced by the system.

The Grand Wagoneer will benefit from a Plug-in Hybrid electric powertrain that takes it to the next level of eco-efficiency for a full-sized SUV.

Jeep is reporting that the Grand Wagoneer could hit production as early as next year. Let’s wait and see. 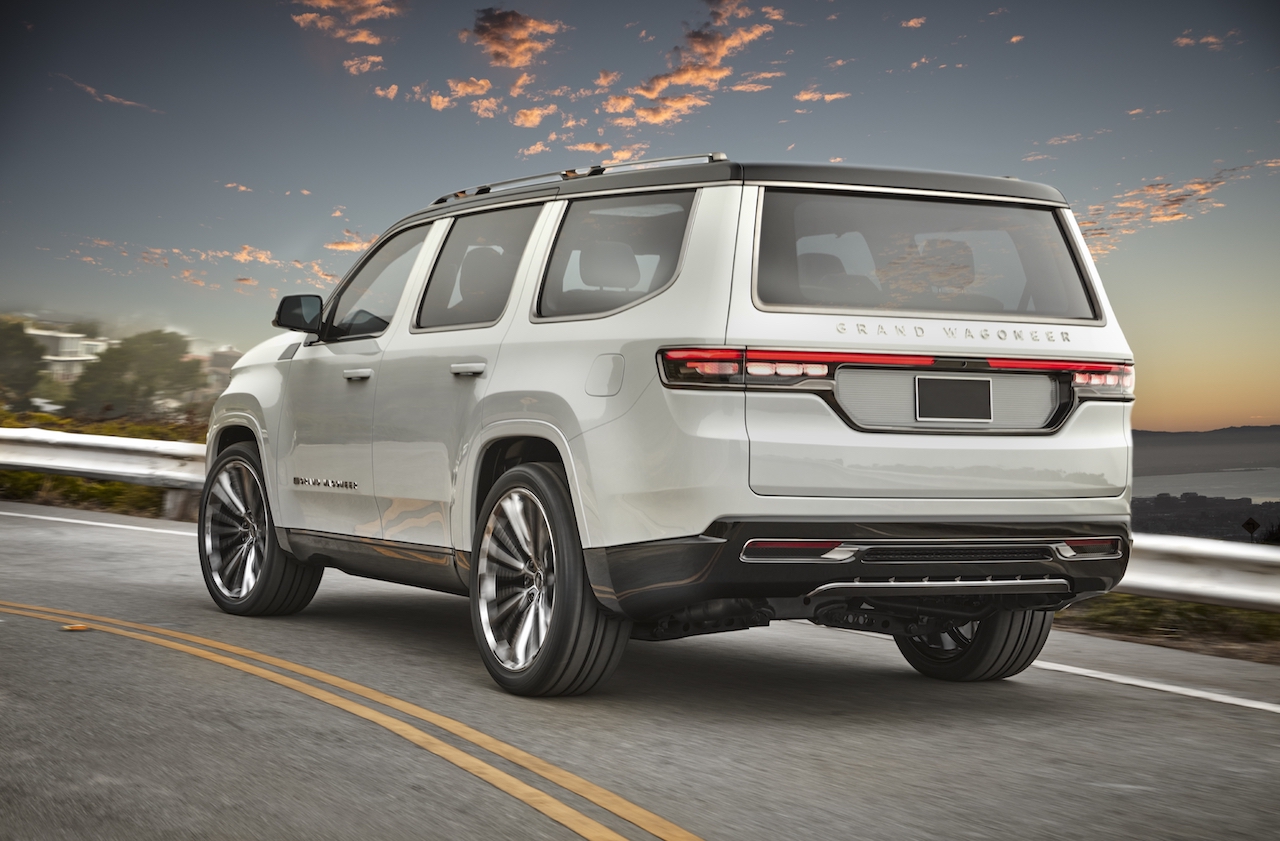