The Japanese manufacturers certainly didn’t disappoint with their futuristic and eye catching designs.

DETROIT, MI: Concept cars have always been a staple of auto shows, and this year was no different at the North American International Auto Show in Detroit.

The Japanese manufacturers certainly didn’t disappoint with their futuristic and eye catching designs.

Today though it’s not so much as what you can see with your eyes, but more about the technologies tucked away out of sight that will enhance and simplify driving experiences in the future.

Lexus opened the show with the stunning LF-1 Limitless crossover concept. Lexus described the design inspiration as it being forged from smooth molten metal into the sharp edges a fine Japanese sword.

The design is striking, the low roofline and elevated ride height combine to emphasize an athletic stance that conveys more of a performance persona than that of a crossover.

The familiar Lexus spindle grille on the LF-1 has been greatly exaggerated, with details that suggest the start of the spindle form way further back on the vehicle that then continues forward toward the nose.

As the name would suggest the available powertrains are limitless with it being potentially powered by a fuel cell, hybrid, plug-in hybrid, gasoline or an all-electric motor. Lexus have stated that all of its line up will have one or more of these drivetrains available on its entire vehicle lineup by 2025.

The interior trim is finished with a satin finish giving it a warmer feel. Accents around the instrument panel and on the steering wheel enhance the cockpit feel for the driver. Additional metallic accents throughout the interior contrast with the dark leather trim and seats liveried in White perforated leather. 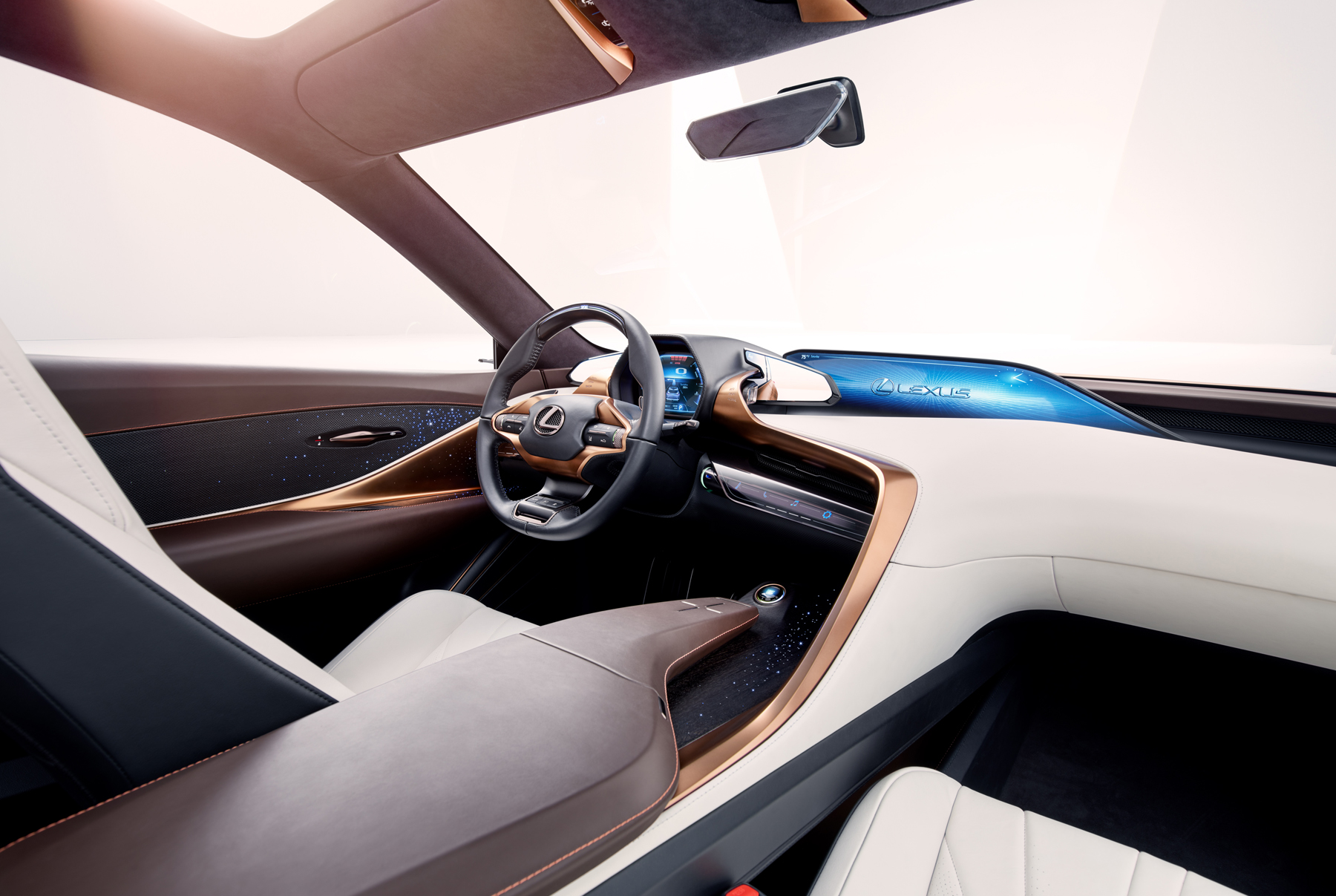 The Xmotion pronounced “cross motion” is Nissan’s future vision of their compact SUV’s.

This three-row, six-passenger CUV has a minimalistic, but boxy exterior, that is enhanced by the large flared wheel wells covering the sturdy metal crafted 21” mechanical tool-inspired wheels and rugged all-terrain tires. 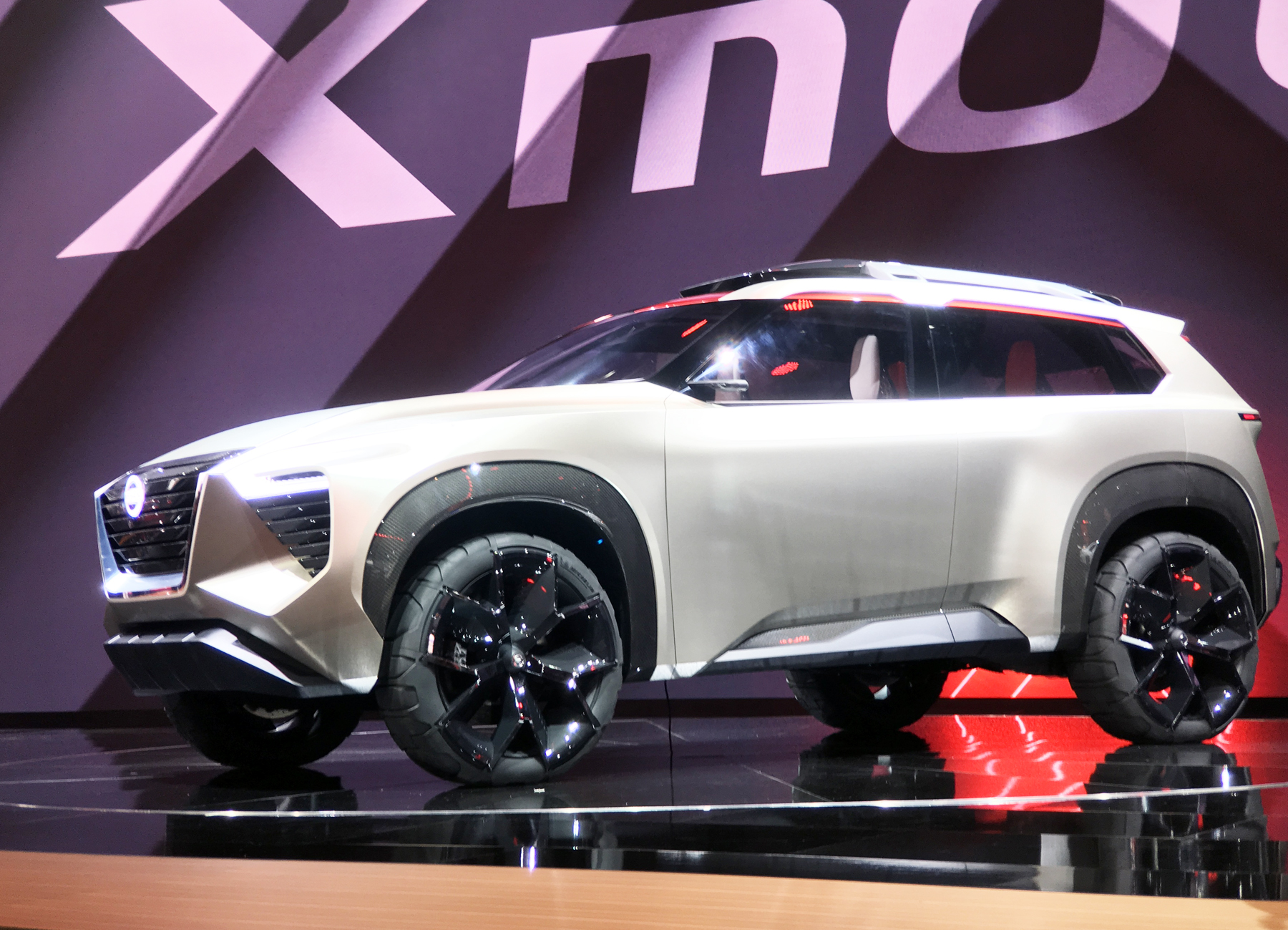 A long wheelbase with wheels pushed out as far as possible to the corners enhance the ruggedness and dynamic presence of the Xmotion as well opening up the interior cab allowing for a “4+2” passenger layout featuring three rows of side-by-side individual seats.

Rear suicide doors allow for easy access through the huge opening to the large and spacious interior cabin.

The design concept for the cabin is based on the imagery of a river on the floor, with the center console acting as a bridge.

Technological innovations are abundant inside with seven digital screens spanning the width of the instrument panel. Gestures and eye movements allowing the driver to concentrate on driving can control the displays and infotainment system. 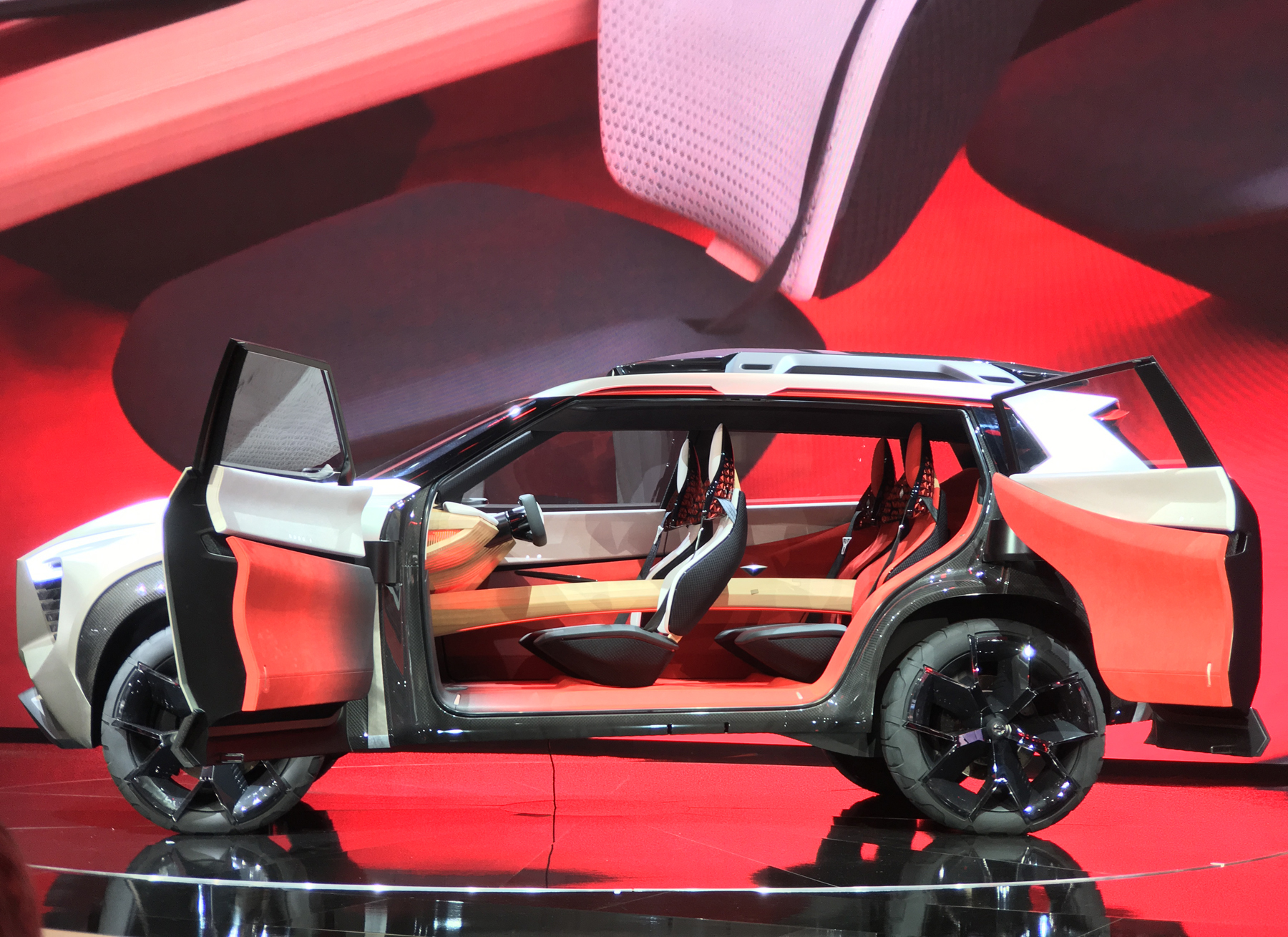 The styling of the Q Inspiration is very refreshing in a segment where style usually takes second place to function. The long flowing body lines from the hood up and along the roofline give the Q Inspiration a coupe appearance but with the functionality of a sedan. 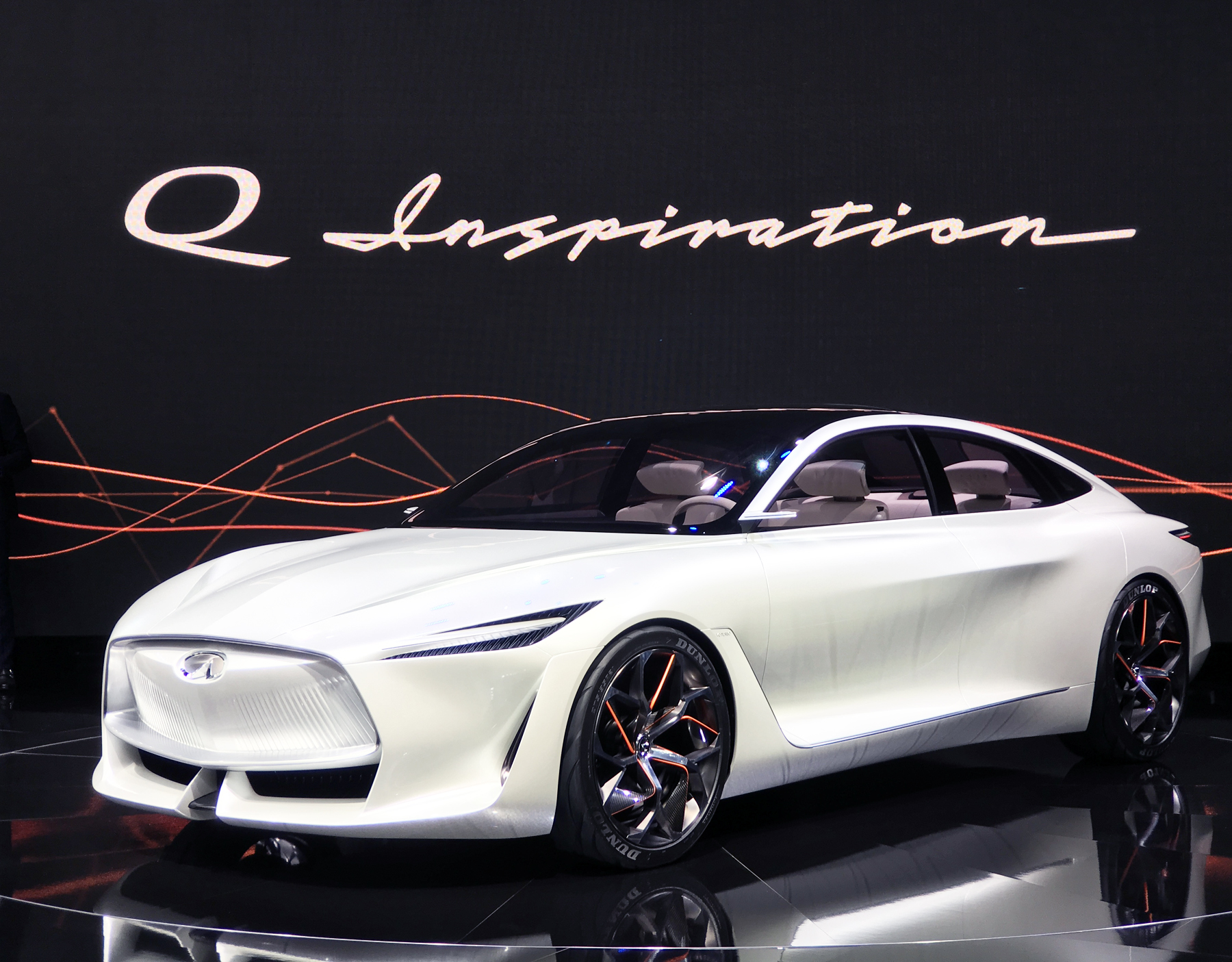 The interior is minimalistic with a concise and clean interior design that wraps around the driver and passengers. Entry and exit to the rear seats is by means of suicide doors that open up the cabin making ingress and egress all the easier.

Infiniti’s ProPilot functionality plays a large role in the Q Inspiration. The system allows the driver to delegate more menial driving tasks to the car, without handing full control over to it.

The Q Inspiration also previews a plethora of other near-future applications and technologies that Infiniti see as being more appealing to a younger audience that are attracted to a more modern design while staying connected to the outside world. 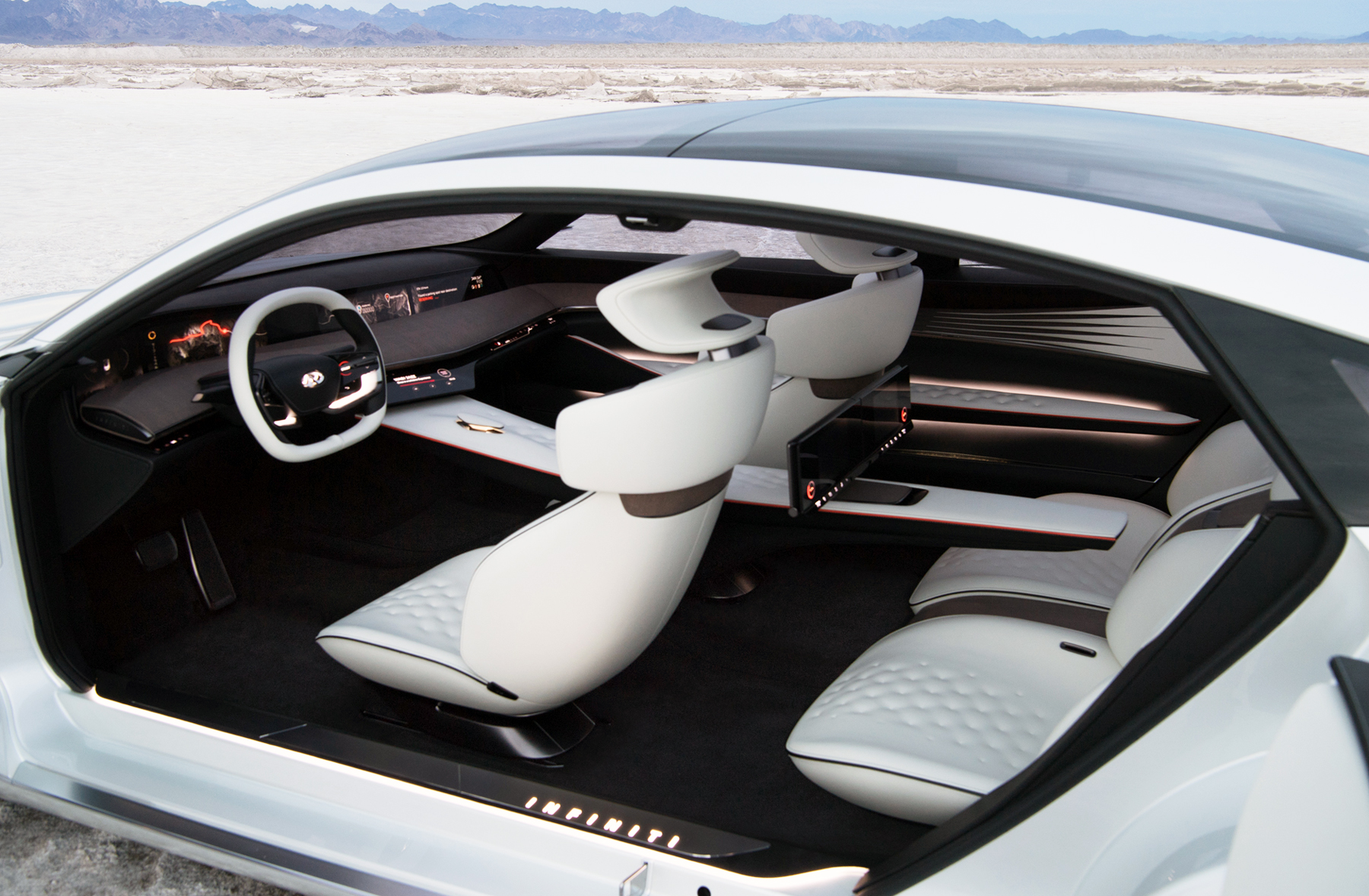