Jaguar Lets Two New Cats Out of the Bag

The new vehicles were on display early at the company’s brand new $30 million North American headquarters.

NEW YORK, NY: I cranked the wheel hard and aimed the nose of the Jaguar I-PACE at yet another set of pylons.

The engine was, of course, not roaring.

But my blood was singing, the tires were squealing and I was the first Canadian automotive journalist to drive Jaguar’s first-ever all-electric vehicle, one of two new models unveiled by Jaguar Land Rover for the New York International Auto Show (NYIAS).

Actually, the new vehicles were on display early at a brand new company venue before the show even opened, debuting on stage and in the autocross lot during the Tuesday March 27 grand opening of the company’s new $30 million North American headquarters. 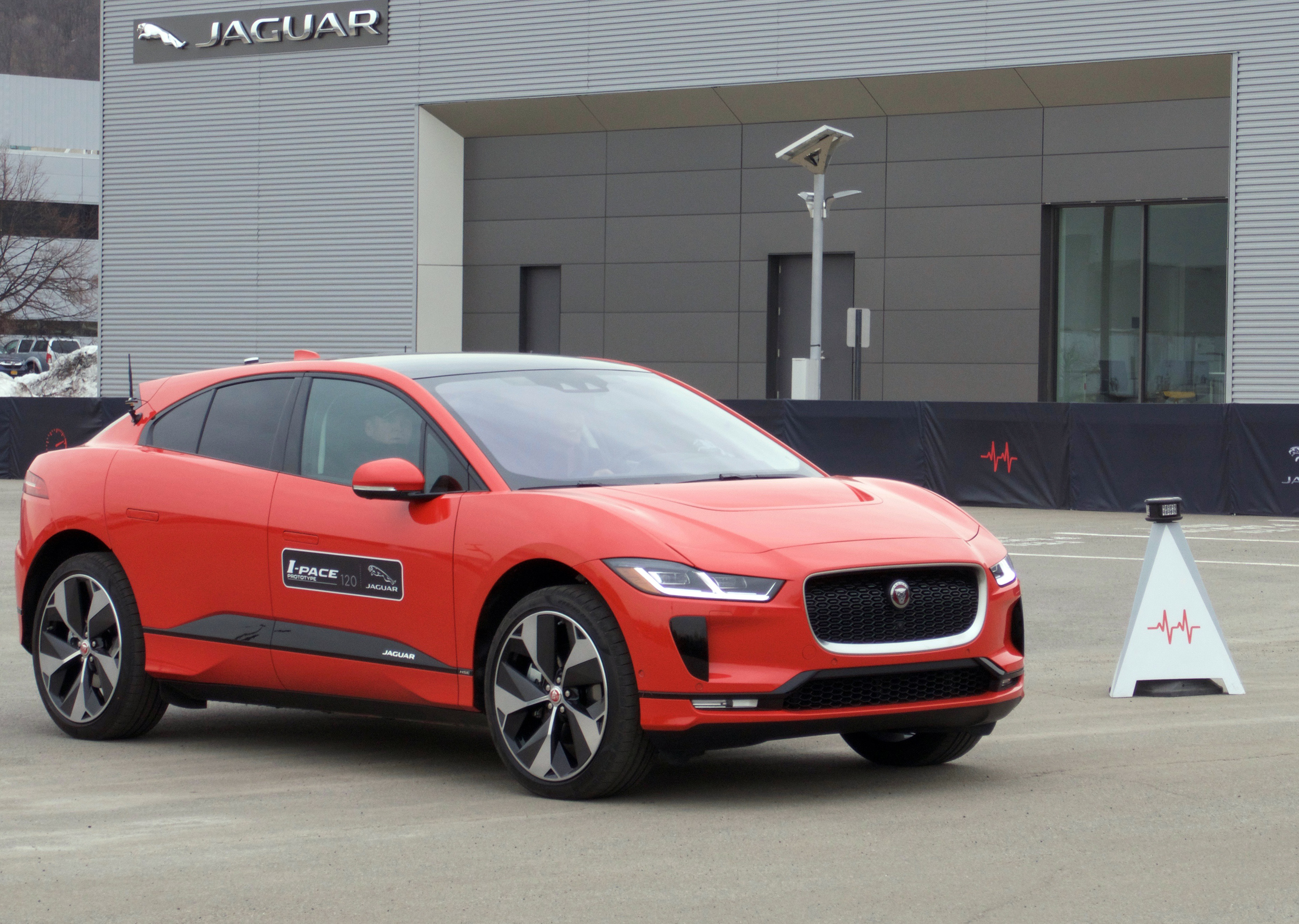 The I-Pace took its initial design cues from the C-X75 supercar concept and has stayed true to the sporty values of the follow-up I-Pace concept that first debuted at the 2016 LA Auto Show.

A slippery, cab-forward design offers a coefficient of drag rating of 0.29 cD.

The EV architecture layout also optimizes interior space, allowing for roomy seating spaces, laptop storage under the seats, 716 litres of rear luggage room expanding to 1,444 litres with the second row folded and 12.3 litres of unique central storage where a normal vehicle’s transmission tunnel would be.

There’s even a storage compartment in the front trunk (frunk?), under the hood.

But aside from all the high tech wizardry, let’s not overlook the I- Pace’s performance potential, starting with a lightweight aluminum structure and the most rigid platform in the Jaguar lineup, bolstered by Active Air Suspension and optional Adaptive Dynamics.

Before the NYIAS, Hollywood actor Ansel Elgort, a native New Yorker and star of “Baby Driver”, was one of the first to experience the I-PACE’s ride, handling. It produces an impressive 394 hp and 512 lb/ft of torque with the combined effort of two electric motors, one mounted on each axle and streaming power to all four wheels for a 0-100 km/h acceleration time of 4.8 seconds.

I’m afraid I didn’t quite match his performance on the autocross but I’m ready for a further exploration of the massive electric power streamed from a 90 kWh lithium-ion battery pack.

The pack incorporates 432 uniquely designed pouch cells and is centrally located between the two axles for optimal 50/50 (front/rear) weight distribution and a low centre of gravity.

The battery pack can provide up to 386 km of range and can regain 270 km in about an hour via a Level 3 DC fast charger or be home-charged in about 10 hours (overnight) through a 240V outlet.

Some tech features worth noting include a 4G Wi-Fi hotspot, an “Ask Alexa” car info app, software over-the-air downloads, mobile control over pre-conditioning to warm or cool the battery before driving, eco mode, smart charging at programmed time, even a HomeLink Connect that let’s you control your home heating, lights and doors via the car’s touch screen. And the list of innovative technologies and features goes on and on.

The 2019 Jaguar I-Pace production model should start arriving in Canada by late summer with prices yet to be announced (minus provincial incentives). 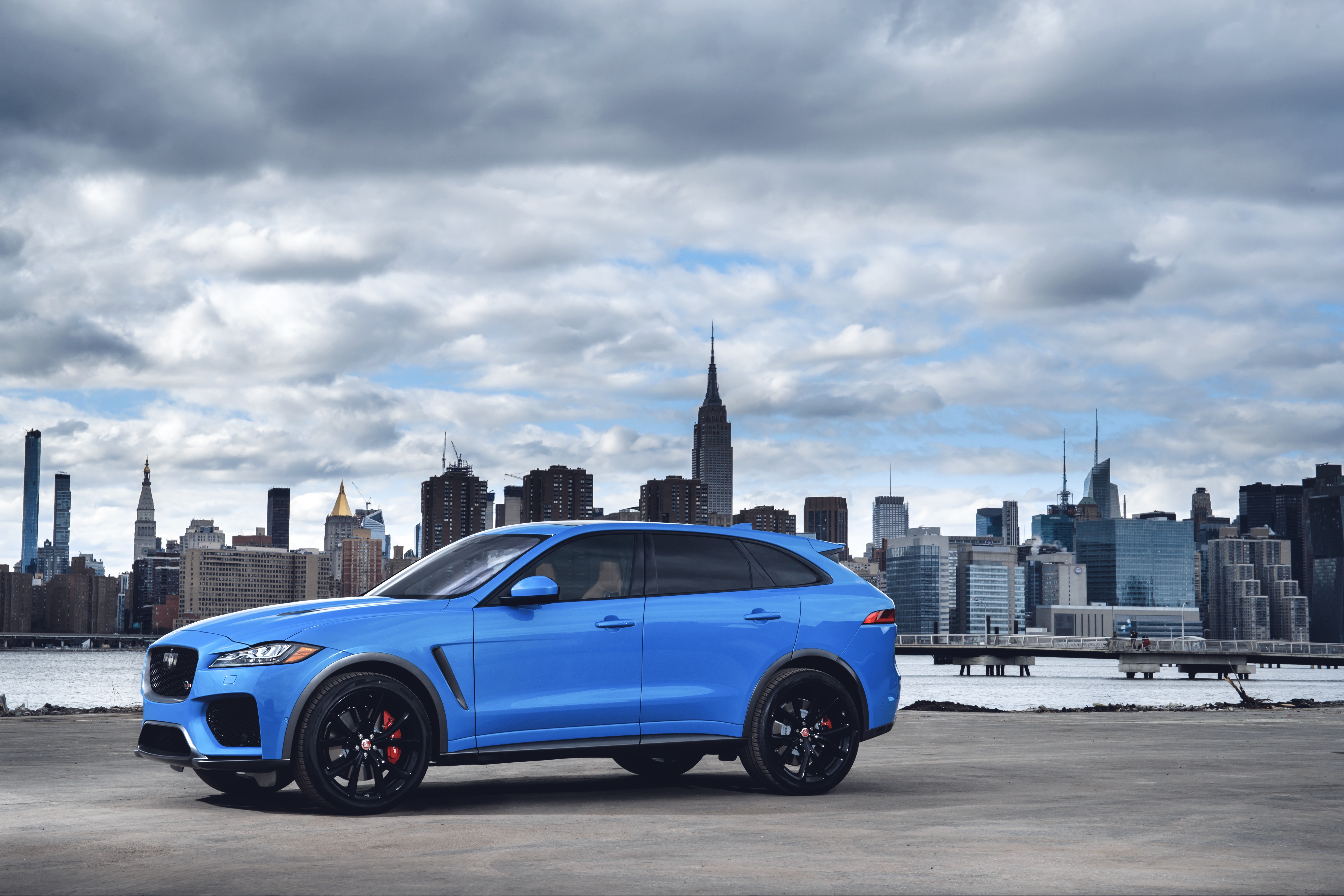 It’s been only a couple of years since the F-Pace itself debuted in the face of the usual naysayers worried about brand dilution. But Jaguar’s first crossover SUV won the hearts of Jaguar customers and also took home first place honours as 2017 World Car of the Year (WCOTY) and World Car Design of the Year.

The F-Pace also quickly took over top spot as the brand’s best selling vehicle in the world. That included more than 2,600 Canadian sales in 2017, more than the sum total of all other Jaguar sales combined in Canada.

The lineup previously culminated with the F-PACE S that harnessed a 380 hp supercharged V6 that boasted a 0-100 km time of 5.5 seconds.

“Now we go from the sublime to the ridiculous” as Ian Callum, Jaguar’s chief designer joked as he unveiled the high-performance F-Pace SVR version featuring a 5.0-litre supercharged V8 engine making 550 hp and 502 lb/ft of torque through an eight-speed transmission and all-wheel-drive.

With that kind of muscle, this F-Pace SVR might just be one of the fastest SUVs on the planet.

Jaguar backs the power with performance enhancements that include dynamic tech assists, an SVR-tuned chassis with upgraded springs and suspension, bigger brakes, lightweight 21- or 22-inch wheels, a specially tuned exhaust and SVR aerodynamic tweaks with unique front and rear bumpers, lower body sides and a rear spoiler for high-speed stability.

Adding real “sport” to the luxury crossover sport utility segment, the 2019 Jaguar F-Pace SVR comes to Canada this summer with a starting price of $89,900.

More about both of these vehicles later as we near their Canadian launch dates.