Automaker’s director of design has combined passion for art with engineering into a unique career.

Ian Callum, the award-winning director of design for Jaguar Land Rover — whose E-PACE compact performance SUV is a big hit at the 2018 Canadian International AutoShow which opened yesterday and will continue through until Feb. 25 at the Metro Toronto Convention Centre — is concerned that today’s children have lost the ability to amuse themselves.

With everything available to kids these days, from smart phones to virtual reality with a dollop of artificial intelligence thrown in, “they don’t have to use their imaginations any more — in fact, they don’t know how to use it — and they’re losing the power of creativity,” he told me in an interview.

This observation had come about because, during our chat, I’d asked Callum — who’s 63, by the way, and originally from Dumfries, Scotland — where his passion for designing cars had come from. He said he couldn’t say for certain, because it sure didn’t come from his parents.

“It started off at a very young age,” he said, “even before I went to primary school, and it just evolved. Little toy cars might have had something to do with it, but I must have gotten a sketch pad at Christmas and I just started drawing. We didn’t have a television set, so I had to amuse myself. I feel sorry for later generations because they don’t know how to amuse themselves. And it’s so easy with a sketch pad.

“Ànd I remember taking a bunch of old cardboard boxes and I made my own car interior, complete with a steering wheel, at the age of 5. I wanted to be part of that world; I wanted to be in it. My parents were brilliant, and my father was hugely encouraging — he was a lawyer; neither of them (mom as well as dad) had any interest in cars or art — but I did have a problem at school.

“You’re in streaming by the time you’re 14 (in the U.K.), and I wanted to do engineering and art, and they said you can do one but you can’t do two. They had to redo the curriculum so I could do both, and they couldn’t understand for the life of them what one had to do with the other.” 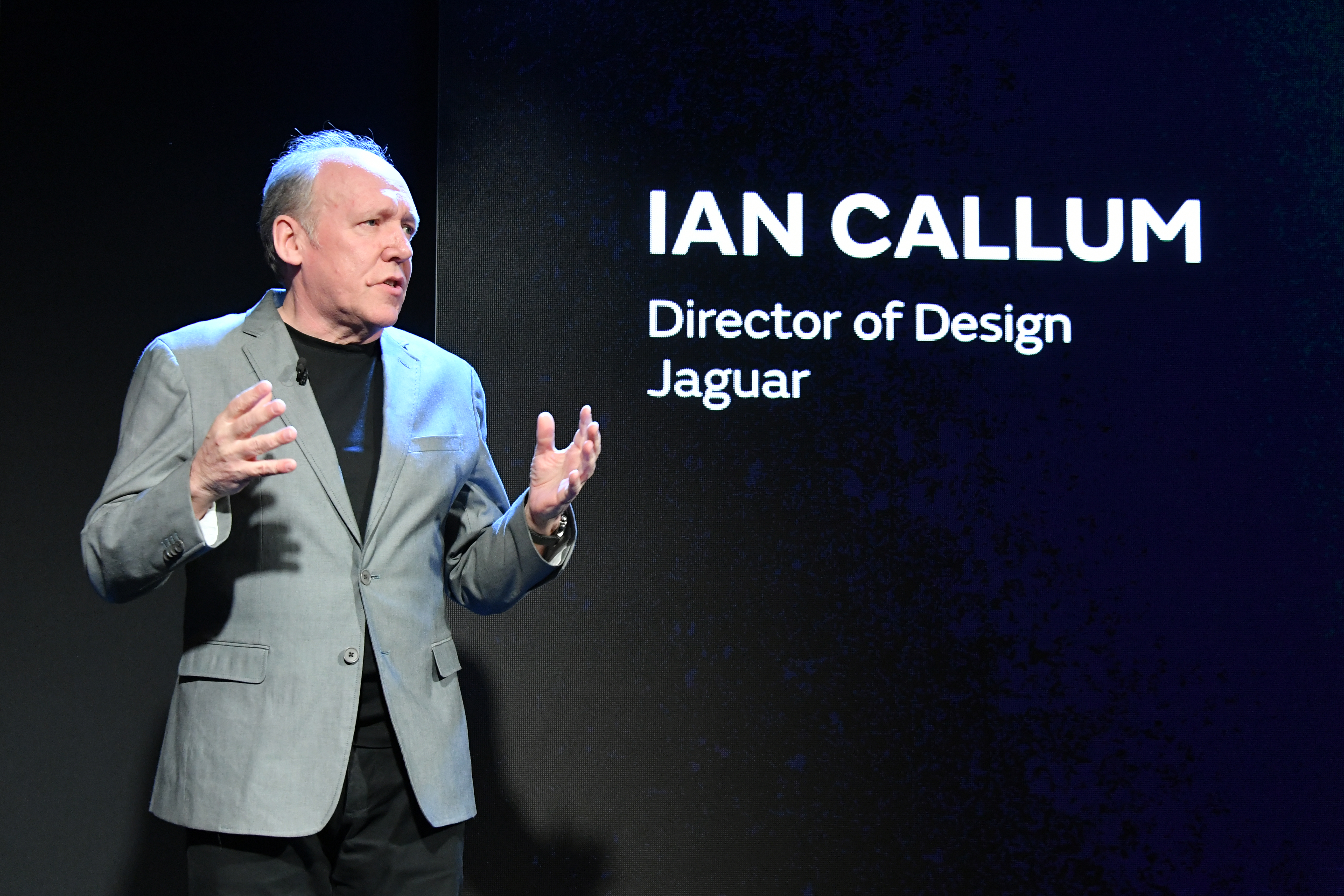 When it comes to automotive design, they are both important, of course, and the decision to allow Callum to study each paid huge dividends. He was able to go on to earn a degree in industrial design from the Glasgow School of Art and then got a postgraduate degree in vehicle design from London’s Royal College of Art.

And the rest, as they say, is history. Callum first worked with Ford (“I travelled the world — I lived in Detroit, Germany, Japan, Italy, and Australia”) before teaming up with racer Tom Walkinshaw at TWR (he didn’t do Formula One directly but was responsible for the graphics on the Benetton cars). Then he worked with Aston Martin before joining Jaguar 18 years ago.

What got me talking to Callum was the introduction late last year in Detroit of the E-PACE. There were probably 50-plus automotive journalists in the room and one of them — a woman — had interrupted his speech to ask a question. Where, she wanted to know, would she be able to put her purse?

As I have received letters from readers who have the same concern, I sought out Callum — who’d put the questioner off till later — to find out what he’d said to her and what I could tell Wheels readers.

“When I went and spoke with her after, I explained that there is not a square millimetre of the interior left untouched,” he said. “Everything has a reason for being there. We put as much room in the place as we can around the constraints we’ve got and what’s left of what we’ve created for you is as good as it’s going to get. I can’t create space out of the ether.

“Then I said, ‘What size is your purse?’ and she showed me, and I said it could probably go in the side pocket. If you have a purse that’s like a backpack, then we have a problem. But we’ve maximized the space. The amount of room in the centre cubby is really quite large, and she may well be able to get her purse in there.”

How Vehicle Accessibility is on Reader’s Mind

But then he told me something really interesting about electric cars — something that I, at least, had never considered.

“When you get to the I-PACE (which is Jaguar’s first all-electric car that will be in showrooms sometime this year), you don’t have a big centre console with a driveshaft through it, and the floor is much lower, so when you open up the bin of the I-PACE, you will see that it’s huge inside and there will be a place for purses. The great thing about electric cars is that it offers you the opportunity for space like never before.”

I had been in Los Angeles a year ago November when the I-PACE concept had been unveiled and reminded Callum that he’d told me at the time that 95 per cent of what had been in the concept would eventually make it into the car you could buy for the road.

And that’s when he told me something else I didn’t know. He called it the “rule book” for show (or concept) cars.

“On any show car we’ve ever done, every surface has been slightly exaggerated,” he said. “When you put a concept into a huge hall, you have to exaggerate it a little bit. You have to shout just a bit louder. The wheels are a bit bigger on the show car, the body flares are just a little big bigger. We do it to get the maximum effect when we take the covers off.”

Callum doesn’t do the design job all by his lonesome. There are nearly 900 people — designers, engineers, clay modellers, project managers — working on projects at any one time. “Half of them report to me at any given moment,” he said. “They move around from project to project.” 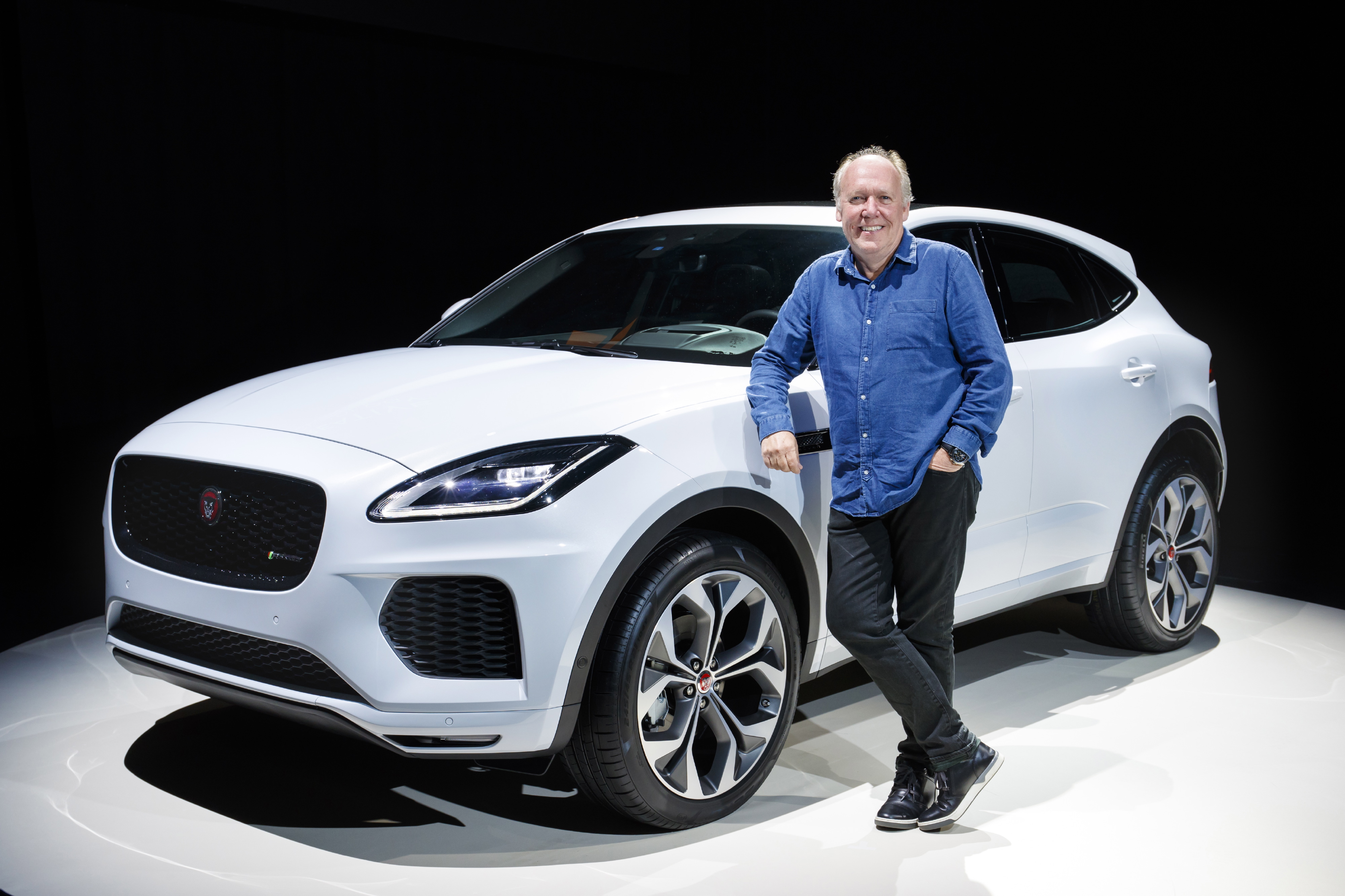 Callum said the all-electric I-PACE was designed from the ground up, and he was involved from the very beginning. “It was something I wanted to do personally,” he said. He explained that the E-PACE was changed a lot in the process.

“Julian Thompson is my assistant director,” he said, “and he and I work very much as one team. We have three other directors who work for me at various times. We agree and disagree, that’s all part of the fun; we throw things around and then they’ll say, ‘Well, which way do you want to go?’ and I’ll give them direction. I still draw, but I’m not the person doing every single detail in the car. I can’t. But I’m giving them the big picture.”

I asked Callum if he ever got a sense that something they were working on was going in the wrong direction, and he acknowledged that it happens.

“We still do clay models, and we look at them and all the details — interior, exterior, all the ergonomics — and we’re constantly analyzing whether it’s right or not. The way I organize the team is I say if we’re going to look at something subjectively, which a lot of this is, I want you to pretend somebody else has designed it; not you or your team, somebody else. And then criticize it to the nth degree; give it the acid test. At that point, you have to be ruthless, and if it is the case, say it’s not good enough. You can’t be shy if it’s wrong.”

Callum, who insists he doesn’t have ambitions beyond where he is now, said auto designers are extremely creative and could probably design just about anything. “Being car enthusiasts, it’s quite a unique situation. It’s hugely romantic. People say to me, ‘What would you do if you weren’t a car designer?’ and all I could think of is songwriting.”

Catching up with Jaguar Land Rover