Jim Kenzie took a turn around a JLR-designed slalom course, which teaches drivers about the cars and how to better control them.

How can high-performance carmakers show off their vehicles’ capabilities on today’s crowded, speed-limited roads?

Several of them have taken to demonstrations in off-road situations.

No, no, not running them through the boonies, although for SUVs, that is a popular choice.

Often, these activities involve taking the cars to racetracks. Always fun, if you know what you are doing.

But racetracks can be intimidating for many potential customers, not to mention potentially dangerous to life, limb and vehicle.

Plus, there aren’t that many racetracks — they are often booked up by real racers, and they are usually located a long distance from where those potential customers live.

Some companies create mini racetracks in urban parking lots using plastic pylons, often referred to as “lawyer’s children,” in an attempt to reduce the number of times the guests actually run over them.

But these events, while fun, don’t always teach you a whole lot about how the car behaves, or how to improve your real-world driving.

Jaguar Land Rover has come up with a plan that is still fun, but which also teaches you a bit more about the cars, and how to better control them.

It is called the ‘Art of Performance Tour,’ and it is coming back to the Toronto area and other selected Canadian cities this fall. Dates and exact locations TBA.

All this tour needs in the way of facilities is a big open parking lot. In the case of a recent iteration of this event in the GTA, it was that of the Woodbine horse racing track.

They bring the pylons and a host of other significantly higher-tech equipment, and there you have it — a chance to put the vehicles through their F-paces (ho, ho …) with minimal risk to either the potential customers or the vehicles. OK, so a few pylons may bite the dust. 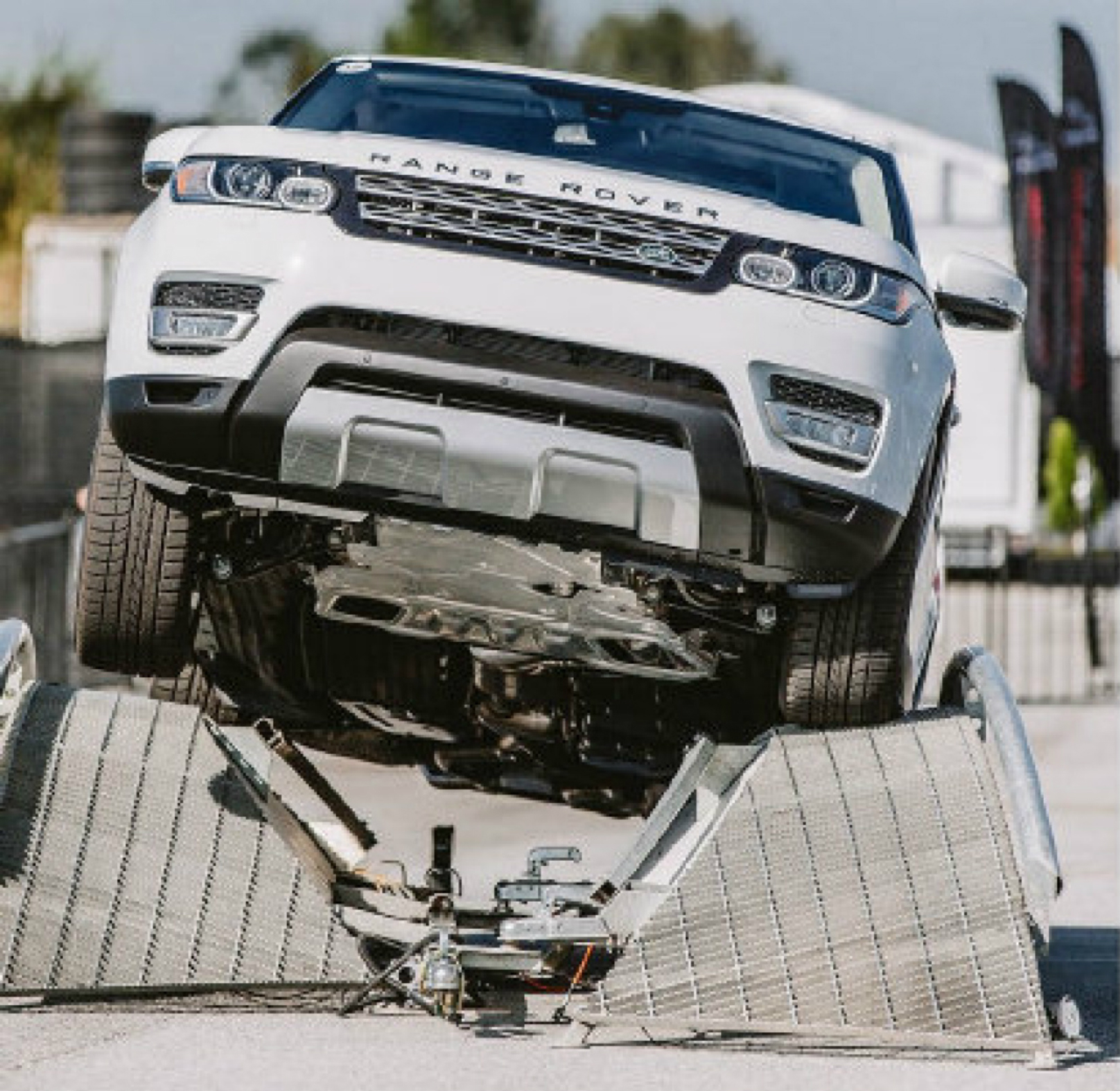 The JLR event (to use the corporate short form the company self-referentially uses) involves two unique pieces of equipment, one for each brand. For the Jaguar sedans — in this case, the compact, four-wheel drive XE — it is a massively complex variant on the classic parking lot slalom.

At first, it looks like the usual course marked out by a sea of apparently randomly placed pylons. But some of these pylons have little lights installed in them, which are turned on or off by a computer-controlled system. Also, the cars have transponders located in the front and rear bumpers, whose presence is detected by sensors in the pylons themselves.

So, you take off from the starting gate more-or-less as usual for slalom events. Except, you don’t know which ‘gate’ of two pylons you are supposed to head for until a pair of lights switches on momentarily. You then head for that gate as quickly as you can.

At the same time, the transponders in your car are measuring how close you come to the pylons. And in this case, the idea is to centre the car between the two lit-up pylons as accurately as you can. (I’m sure the fact that this would minimize the potential damage to these more-expensive-than-usual pylons never crossed JLR’s mind …).

All this cleverness puts a new spin on slalom courses, of which I’ve driven about a million over my career. You end up being measured by the computer not only for your time to complete the course, but also — primarily — for how well you centre the car within the various gates.

I don’t remember my score, but I am proud (blush …) to say I was on top of the leader board. OK, so I went first, but I remained there until I had to leave. A bit early, true, but still …

Jaguar has run various professional racing drivers and other celebrities through this program in cities around the world, but because each course is a little different, times aren’t easily comparable. But me and Formula One driver Romain Grosjean … I’m jes’ sayin’ …

The key to this event is that it forces the driver to react to situations (s) he cannot foresee. Excellent training for the real world.

Jaguar Land Rover Canada was also justly proud that their event, under manager Aleksandra Bulat, was ranked internally as the best-run one in the world.

On the Land Rover side, the trick for any manufacturer of off-road-capable equipment is coming up with a course that is very tough-looking, but which the vehicle can still negotiate successfully, albeit just barely. As Bill Baker, the (sadly late) former PR guy for Land Rover in the States used to say, “If the vehicle can do it, the course wasn’t tough enough; if the vehicle can’t do it, the vehicle wasn’t good enough.”

It is also difficult to come up with such a course in an urban region. Funnily enough, most parks and recreation area staffers don’t take kindly to trucks driving up their hillsides.

So, JLR brings their own, a massive metal structure designed to, well, simulate a mountain. Actually, a mountain with a hinge in the middle of it.

The instructor actually drives the vehicle in this event; the guests are ballast. (S) he approaches what appears to be an impossibly steep slope, engages the multi-setting, four-wheel drive system just so, and proceeds to crawl up this contraption. All you can see from the passenger seat is sky.

Again, I have done about a million off-road driving events, many with Land Rover. This was truly impressive.

At the top of the ‘faux’ mountain, the aforementioned hinge comes into play, the vehicle slowly pivots to point downhill, and inches its way down. A testimonial to sophisticated four-wheel drive systems and to the tires which allow them to work.

Because only so many people can participate in these events at a time, JLR also lays on a couple of conventional slalom courses, and guests can take the Jaguar sedans, the brilliant F-Type sports car, the F-PACE SUV and various Land Rover vehicles for spins. Hopefully, not literally …

The criteria for getting yourself invited to attend the upcoming events this fall appear to be somewhat vague. The idea is mainly to attract new customers to the brand, so maybe you drop in to your local Jaguar Land Rover dealers driving your Audi, BMW or Mercedes-Benz and tell them you’re thinking of switching brands.

You can also apply online for a chance to get invited. Search for ‘Jaguar Land Rover Art of Performance,’ and you’ll eventually find it.

Or try to convince them you are an automotive journalist …