OPINION: It’s up to you to Nominate People for Motorsport Hall of Fame

Please think about this, and if you know of someone who merits consideration, please nominate them.

I have been inducted into the Canadian Motorsport Hall of Fame twice.

Not really — but allow me to explain.

Early in 1993, I received a press release from two guys I knew from racing, Gary Magwood and Lee Abrahamson, announcing the creation of the CMHF. As well, the release announced that the first gala induction dinner would be held at the Four Seasons Yorkville and feature John Surtees as guest speaker. It also announced the first group of inductees, headed by the late Gilles Villeneuve.

Never one to back down from a fight, I fired off a fax to Magwood. “Congratulations on the Hall of Fame and your first group of inductees,” I wrote. “But there is racing in this country other than road racing,” I continued, “and I consider the omission of the late Billy Foster, the first Canadian to qualify to race in the Indianapolis 500, to be a mistake.”

Magwood was, and remains, a very intuitive person. Fifteen minutes later, he faxed me back. “His name was just added to the list,” he said. (Editor’s note: Foster, of course, was not the first Canadian; he was the sixth, as the CMHF has since discovered.)

I attended that first induction gala — I sat at a table in the back with Jean Gauthier, former owner of Shannonville Motorsport Park — and moments before grace, Magwood approached me. “We couldn’t find anyone from the Foster family to be here,” he said, “so you’ll have to represent him,” which I was happy to do.

I accepted the induction honour on behalf of Foster, his family and “all oval racing drivers in Canada.” As luck would have it, I was able to make contact with Foster’s son, Billy Foster Jr., who was a police officer in Victoria, and presented him with the Hall of Fame medallion when we were both at the 1995 Molson Indy Vancouver.

So that was induction No. 1.

Induction No. 2 came in 2013 when I was welcomed into the Hall as the first journalist to be inducted. I was in a class with Diana Carter, John Magill, Nigel Mansell, Scott Maxwell and Paul Tracy. Pretty good company, if I do say so myself.

The reason I am writing about this today is because nominations are now open for the next induction ceremony, which will be held in downtown Toronto at the Canadian International AutoShow next February. And this is where everybody reading this comes in.

People frequently come up to me and say, “How come so-and-so isn’t in the Hall of Fame?” And I reply, “Probably because he/she hasn’t been nominated.” Let me explain.

It is not the job of the Motorsport Hall of Fame, or any other hall of fame, for that matter, to cherry pick who will be inducted. These are not “old boys’ clubs,” or shouldn’t be. Inductees are selected from people nominated by the public. In a media release this week, the CMHF said this:

“The CMHF honours and recognizes the achievements of individuals and institutions who have made outstanding contributions to Canadian motorsport as drivers, owners, team members, motorsport builders and significant contributors, as well as those who have distinguished themselves in a new media category.

“‘I look forward to seeing the nominations for this year. I do not envy the selection committee, which always has difficult choices to make,’ said the chairman of the board of directors, Dr. Hugh Scully.

“‘I urge everyone involved in motorsport — from team owners to drivers to fans — to nominate anyone who you feel has made a major contribution to motorsport in Canada, whether behind the wheel, from the owner’s box, on a timing stand, turning a wrench or holding a microphone.’

“As a general rule, inductees must be retired from competition for at least three years or, if still active, involved in motorsport for at least 25 years. Information about the nomination process, including the form, and submission requirements are available at CMHF.ca.”

OK, let me emphasize what Scully is saying about nominating someone. Road and street racing, for instance, could not happen without marshals. I know marshals who have flagged at Canadian Tire Motorsport Park, the Molson/Honda Indy, the Grand Prix du Canada, the Grand Prix du Monaco and so on. Several could qualify for induction, but somebody has to nominate them.

I know a fellow who owns a speedway, who races sprint cars internationally, has won championships, has been named World of Outlaws promoter of the year not once but twice and is not in the Hall of Fame. Somebody has got to nominate that guy.

1) You can’t just send in the form and say something like, “Ronnie’s a really great guy and should be in the Hall of Fame,” or “Jeff’s been racing for 40 years and while he hasn’t been very successful, he should be in the Hall because everybody knows him.” Nominators (this means you) have to do the work of listing the contributions and the racing record of the person being nominated. You have to make the case. This is a Hall of Fame (emphasis on the fame).

2) Don’t get discouraged. Just because the person you nominated doesn’t make the cut this year, doesn’t mean he/she won’t be selected next year. Just keep sending in their nomination form, with documentation, and sooner or later, if worthy, they will probably make it.

I mean, how many years did it take for Dougie Gilmour to finally be named to the Hockey Hall of Fame?

Please think about this, and if you know of someone who merits consideration, please nominate them.

Two members of the Hall of Fame, François Dumontier and Ron Fellows, are now the two most powerful men in Canadian motorsport. The FIA announced this week that Dumontier is now the president of the National Sporting Authority in Canada (ASN) and Fellows is vice-president. They replace Paul Cooke and Roger Peart, who have retired. Dumontier is the owner and promoter of the Grand Prix du Canada and Fellows is co-owner of Canadian Tire Motorsport Park. More about all this at a later date.

Last weekend, Formula E became the latest racing series to go virtual when it held the first of eight rounds in the Race at Home Challenge in support of UNICEF. 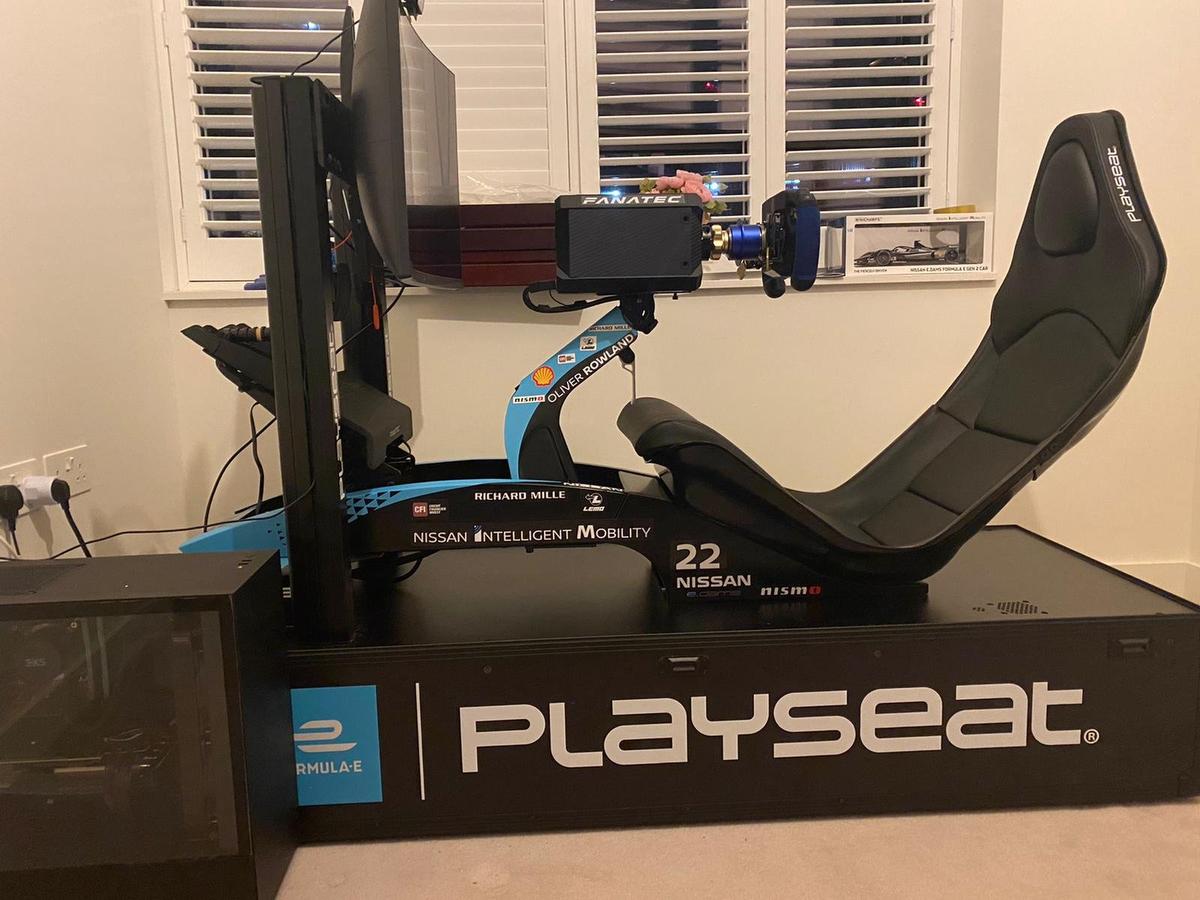 Now, gaming technology, which lends itself to auto racing better than any other sport, allows everyone involved in Formula Electric — teams, manufacturers, sponsors, drivers and fans — to take part in the live online races while raising funds for UNICEF, which will help keep children around the world safe, healthy and attending school online during the coronavirus crisis.

And that technology has also allowed the electric racing series to introduce a Pro-Am element to this promotion. Each race will have two separate grids, one made up of professional race drivers from the Formula E Championship and the other one filled by some of the fastest gamers in the world.

The carrot on the stick for the gamer champion will be a drive on a race weekend in a real Formula E car, once racing gets going again.

To keep this series as even as possible, drivers and gamers are competing using rFactor 2 software. The pro drivers all got simulators provided by Playseat, steering wheels and pedals from Fanatec and the latest gaming PCs, monitors, headphones and other peripherals from Asus.

The usual race points system is in play, but additional points are being awarded for pole position and fastest lap. Double points will also be on offer at the final race on June 13.

Now leading the championship as the result of his win on Saturday, Guenther punched the air as he got the checkered flag. “It wasn’t an easy race,” the German driver said moments after the event. “Even though it’s not the real world, we’re all competitive and we want to be at the front.”

You can watch the Race at Home Challenge every Saturday morning at 10:30 a.m. EDT on FIAFormulaE.com. Play-by-play announcer Jack Nicholls is calling the action, Nicki Shields will be covering the pits and Dario Franchitti is doing colour and analysis.

Now, as luck would have it, I did an interview a week ago Thursday with Nissan drivers Sébastien Buemi and Oliver Rowland. Nissan is in the series to promote its Leaf electric car and its Nissan Intelligent Mobility, which is integrated technology designed to increase safety, comfort and control while driving.

And I say “as luck would have it” because I really didn’t know all that much about virtual racing, or this particular series, and those two drivers were only too happy to fill me in.

Buemi, of course, is a name most race fans would recognize. He is a former Formula One driver (Scuderia Toro Rosso — and he once did a commercial for the sponsoring energy drink Red Bull by driving his F1 car across a frozen lake in northern Quebec) who won the Formula E championship in 2015-16 (Formula Electric starts its season in the late fall and finishes in the spring) and holds most of the records in that series — poles, fastest laps and so on. He was driving when Nissan won its first race in the series, last year in New York. Rowland was rookie of the year last season.

One of the surprising things they both said was that it’s harder to drive a simulator than a real race car. For instance, Rowland said that he’s new to this and, “Instead of cues, like what you can feel and what you can see, all you’ve got is a screen. You have a feeling that you’re driving a very good lap and then you find that you’re not. Some of the more experienced guys (driving simulators) have a bit of a head start.”

Added Buemi: “You don’t get the same feedback; it’s not the same. Simulators have improved massively over the years, but they are still not the same as the real car.”

Buemi said he’s tried to make the best out of being quarantined. “I exercise in the mornings and afternoons, but I am enjoying spending time with my family, which I can’t do because I’m away a lot. My children are four and two, so it’s nice to be with them.”

Returning to the Race at Home Challenge, he said: “It’s not like real racing, but it’s better than nothing. Everybody is stuck at home, so clearly, you have something to watch and I’m very happy that Formula E has launched this.”

Rowland had one suggestion: “You practise all week and then qualifying is one lap, which is kind of nerve-wracking because you don’t want to make a mistake. Instead of practising for five days, I think it would be better if they didn’t give us the circuit until Saturday morning. Then we could practise for an hour and then qualify.”

Formula E donated 10,000 pounds sterling ($17,400 Canadian) to UNICEF and will do so at the conclusion of every race up to a total of 100,000 pounds ($174,000). Fans are encouraged to donate by clicking on the prompts at the official Formula E YouTube channel, Facebook page and Facebook Gaming site, Twitch channel and via @FIAFormulaE on Twitter.

Norris McDonald is a former Toronto Star editor who continues to write for Wheels under contract. He is an inductee of the Canadian Motorsport Hall of Fame and a member of its board of directors.