Irv Gordon Outlived by his Volvo

I had the pleasure of meeting Mr. Gordon in 2000 during one of his many treks to Canada.

“G’morning. I’d like to have my car serviced,” said a tired and rumpled Irv Gordon to the Volvo service adviser.

“Sir, you’re not due for your first appointment until the 1,500-mile interval,” replied the manager, adjusting the plastic calendar to read Monday. “You just picked up your new car on Friday night.”

“I know. I would have come last night, but you’re closed on Sundays.”

Some habits form early, apparently. Gordon would go on to claim the world record for the longest distance travelled in a private automobile, racking up more than 5.2 million kilometres (3.25 million miles) in his beloved 1966 Volvo P1800S coupe.

Sadly, his journey ended last week when the retired middle-school science teacher from Long Island passed away at the age of 77. How fitting that the automobile Gordon had taken meticulous care of would outlive the man.

I had the pleasure of meeting Gordon in 2000 during one of his many treks to Canada. I thought I was going to have to interview him by phone for a Toronto Star story, but he surprised me by offering to do it in person if I waited a few days.

Any excuse to take his little red coupe out on the highway.

He thought nothing of driving the 700 kilometres from his East Patchogue, New York, home to Montreal in an afternoon, savouring a beautifully turned crepe, then promptly pointing his Volvo back to Long Island to ease into his driveway before dawn.

It was impetuous trips like this – Gordon would never earn any environmental lifestyle awards – that clinched his name in the Guinness World Records the first time when he surpassed 1.69 million miles in the same vehicle.

In September 2013 he was cited by Guinness again when he clocked 3 million miles while driving south of Anchorage, Alaska. Up until recently Gordon drove his P1800 daily, covering an estimated 150,000 km per year, thanks in part to having been invited to so many car shows and events in the U.S., Canada and occasionally in Europe.

As promised, Gordon showed up at the door of our Toronto home on a warm day in early March and we walked down to Queen St. for dinner. I was keen to hear what had kindled his love affair with his car, which had been unceremoniously squeezed into a parking spot on our congested Beach street.

Gordon had General Motors to thank for provoking him to kick the tires of a Volvo. Having been “raised in a GM family,” he made a beeline to the Chevy dealer to buy a new 1963 rear-engine Corvair when he got his first teaching job.

“It broke down four blocks from the showroom,” Gordon recalled. And kept breaking – mostly rocker arms and pushrods. He assumed he had gotten a lemon and eventually replaced it with a 1965 Chevy. But it wasn’t any better. Fraught with electrical problems, the car stalled at every infuriating opportunity. 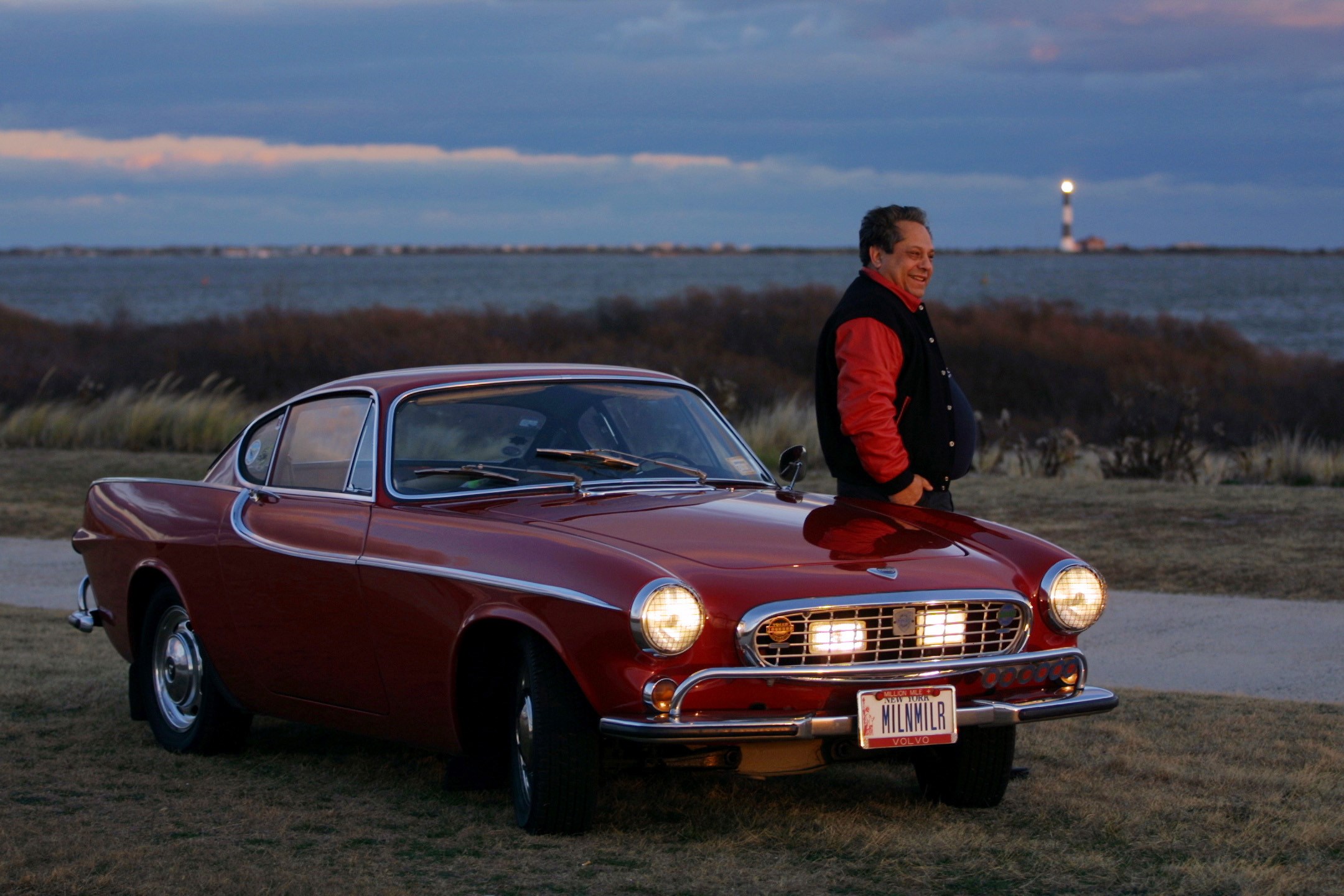 A friend who was a fan of foreign cars took Gordon to Volvoville in Massapequa, Long Island, a Volvo dealer that had made a name for itself sawing off the tops of P1800 coupes and turning them into ragtops, complete with under-dash air conditioners.

In many ways, the 1966 P1800S was ahead of its time. It featured three-point seatbelts, a collapsible steering column and a 1.8-L overhead-cam four-cylinder engine tied to a four-speed manual transmission with an electrically actuated overdrive gear. The twin SU carburetors endowed the engine with 115 horsepower, matching the output of the 2.0-L four that powered base models of the Volkswagen Jetta up until recently.

The 200-km round-trip commutes to his New York City school added up quickly. With each turn of the odometer’s digits, Gordon became more infatuated with his car. When he passed the 250,000-mile mark, he wrote to Volvo North America to share his exuberance.

“I have not spent a dime on this car beyond regular maintenance,” he wrote with exclamation marks punctuating the page.

“We’re happy to hear that you’re very happy. Don’t forget to buckle up,” came the brief reply from headquarters. Five years later, Gordon’s Volvo turned one-half-million miles. He put pen to paper again. “The same letter came back, but under a different signature. The only thing they added was, ‘Have a nice day,’” Gordon told me.

But somebody at corporate had taken notice; his dealer notified him that head office had called to verify his mileage claim. Volvo’s advertising agency dispatched a photographer to take a picture of him with his P1800 and used it as part of a 1978 magazine ad that showed a photo montage of happy Volvo owners.

As the odometer kept spooling, Canada was a frequent destination – and not just for the crepes.

“I have been to most major cities, from Vancouver to Halifax, and many vacation spots throughout the Laurentians. I usually make at least two trips annually to the London area for Volvo events. I have also had my car at the Toronto auto show, as well as dealer openings in the area,” he told me in a subsequent interview in 2010. Gordon observed that Canadians distinguish themselves when they’re behind the wheel.

“Seems to me that Canadians are generally more courteous, at least compared to New York City/Long Island drivers. It always amazes me as to how many Canadian drivers actually use their directional signals, something most U.S. drivers have forgotten about. However, I’ve got to say that Canadians drive a lot faster regardless of the posted speed limit.”

When he crossed the two-million-mile threshold in 2002, he was invited to appear on The Tonight Show with host Jay Leno, an avid automobile collector. Perusing his vast collection, Gordon spotted an oil slick under Leno’s French Delahaye racer and ribbed him about the lax maintenance. He learned you shouldn’t poke fun at Leno’s cars.

“Leno vowed to get me back. In the on-camera interview, he teased me over my divorce and my traveling,” he recalled.

Gordon’s Volvo knew no bounds. His car was shipped to Europe in 1994 after an invitation from Volvo UK to display his coupe, then tour the continent while he was there. (Trivia note: the first two years of P1800 production took place in England, not Sweden, hence it was Roger Moore’s ride in the British television series The Saint after Jaguar refused to supply an E-Type.)

“I was treated like the King of Sweden,” Gordon recalled of the generous hospitality he experienced while piloting his Volvo across western Europe. “You really can’t see the country from 35,000 feet,” he was fond of saying. But view it from behind the well-worn wheel of a P1800 and the country will treat you like a saint.

It was no secret that Volvo over-engineered its cars back then. It had cleaved its B18 engine from its stout B36 V8 truck engine and retained its five main crankshaft bearings – a short cut that proved to be a good thing. Still, Gordon was adamant that no car will last long without a good maintenance regimen.

“Who knows your car better than the engineers who designed it?” Gordon said, referring to their gift to automobile buyers: the owner’s manual. He admonished motorists who rarely cracked open the manual. “If the government ever wanted to hide their biggest secrets about the bomb or who killed Kennedy, they could safely publish the information in a manual. People never read them.”

To keep his own red Volvo humming, he did his oil changes exactly as prescribed: every 3,500 miles (5,600 km). Gordon also travelled with spare belts, hoses, brake pads, water and fuel pumps – even generator brushes, as his P1800 predated the alternator.

Driving home once from a Volvo owners’ meet in Erie, Pennsylvania, his generator had given up the ghost in the middle of the night, forcing him to pull into a closed, but illuminated, gas station in rural New York state where he could make the repair himself.

The problem with finding a lone light bulb on a warm night is that every insect in the county is similarly drawn to the glow. Gordon remembered stripping to his underwear to clamber under his car on a live carpet of creepy-crawlies. 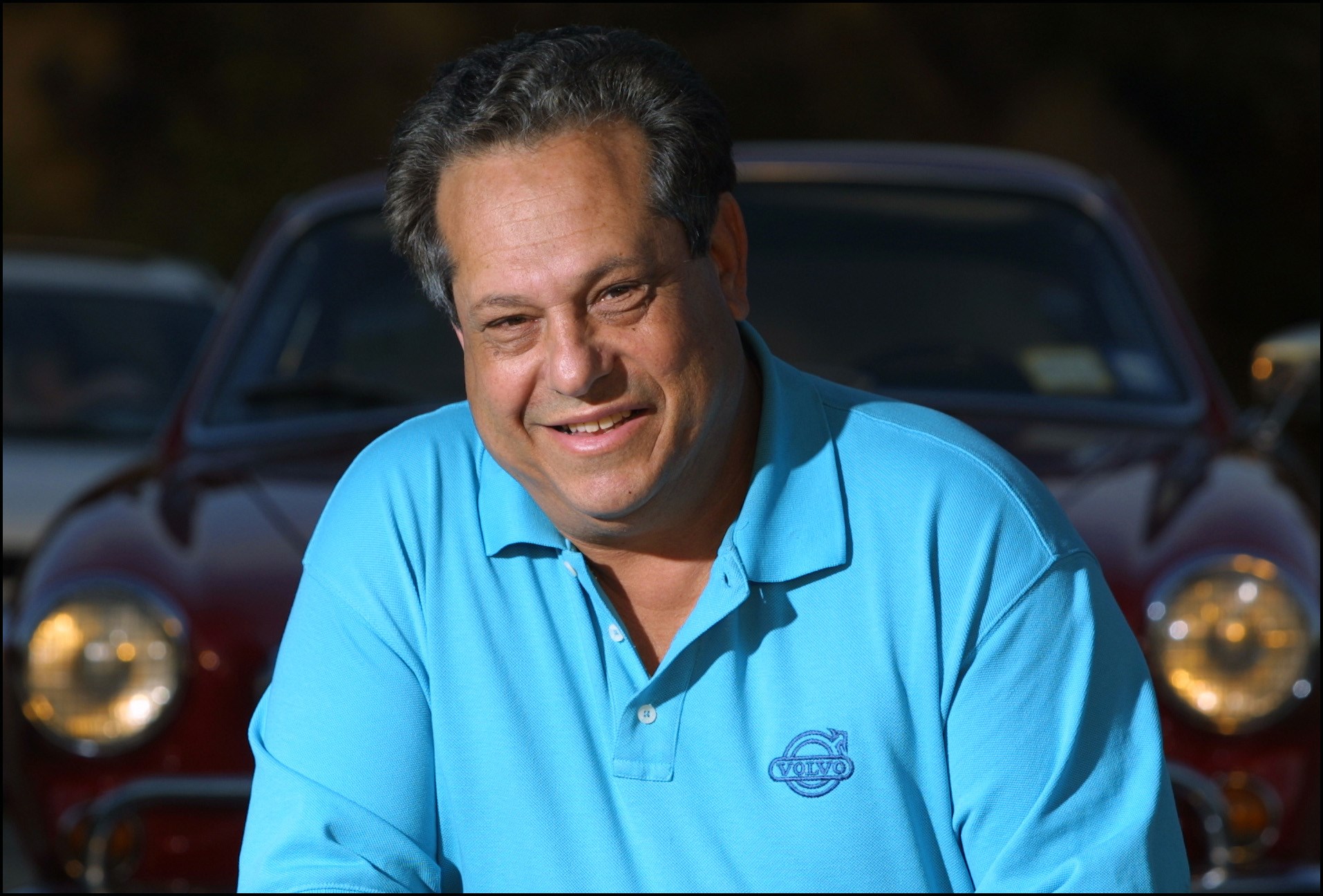 “I had bug juice all over my body,” he told me over dessert. “I looked like a windshield when I got out from underneath.”

For the record, his engine was rebuilt at 680,000 miles, and hardened valves replaced the old ones at 1.7 million miles, negating the need to add lead substitute with each fuel fill. Gordon had the engine rebuilt for the second time in 2009. Thinking the motor was worn out, he bought Teflon-coated pistons and all the best parts money could buy. He needn’t have bothered.

“When they took the engine apart, there was so little wear there was no need to bore it out as planned,” says Gordon. But with all the ordered parts on hand, Gordon proceeded to have his 1.8-L motor bored out to the “B20” 2-litre displacement for which the new pistons were intended.

With more power on tap, it drove like a new car again. The crimson paint likewise has been freshened to gleam.

“The original paint was enamel, which never ages well, especially in red,” he said. “Over the years I’ve had various parts of the car sprayed with modern two-stage paint and it finally matches up.”

Gordon took his world-record responsibility seriously, driving to countless car-club outings, auto shows and dealer openings as a Volvo ambassador and to spread the word about automobile maintenance. He travelled to South Africa last year as a spokesman for Castrol motor oil.

As for his record, he was confident it will stand unchallenged.

“There are a few cars with one million miles on them, but none with two million,” he told me. And after the thorough 2009 engine rebuild, he said something prophetic: “The car will be rolling long after me.”

Given the prospect of mirthless, self-driving modules filling up the streets soon, and the fact that there is nobody in the rearview mirror to snatch Gordon’s five-million-kilometres-driven crown, Irv Gordon’s record will remain an eternal one.

A Brief History of Automobile Warranties