Renault/Infiniti Sports Formula One team gave me the opportunity not only to see the race from the prestigious Formula One Paddock Club but gave me exclusive access to all the behind the scenes action.

Anyone that knows anything about racing will know that F1 is at the pinnacle of motor racing. Not only is it expensive to attend the race as a spectator, but it also takes an astronomical amount of money to actually participate as a racing team. Each team’s investment runs into ten’s of millions of dollars and with regulated specification changes every year makes it one of the most expensive race series to compete in.

I have watched Formula One for years on the Television and seen the organized chaos that happens in the pit lanes and garages during both qualifying and the race and do be given the opportunity to be present during both was both eye opening and a thrill of a lifetime.

I was surprised at first how cramped the Renault/Infiniti Sports garages were. They seem no wider than a regular house garage but with more area at the back but with millions of dollars of equipment managing to fill every spare space available. 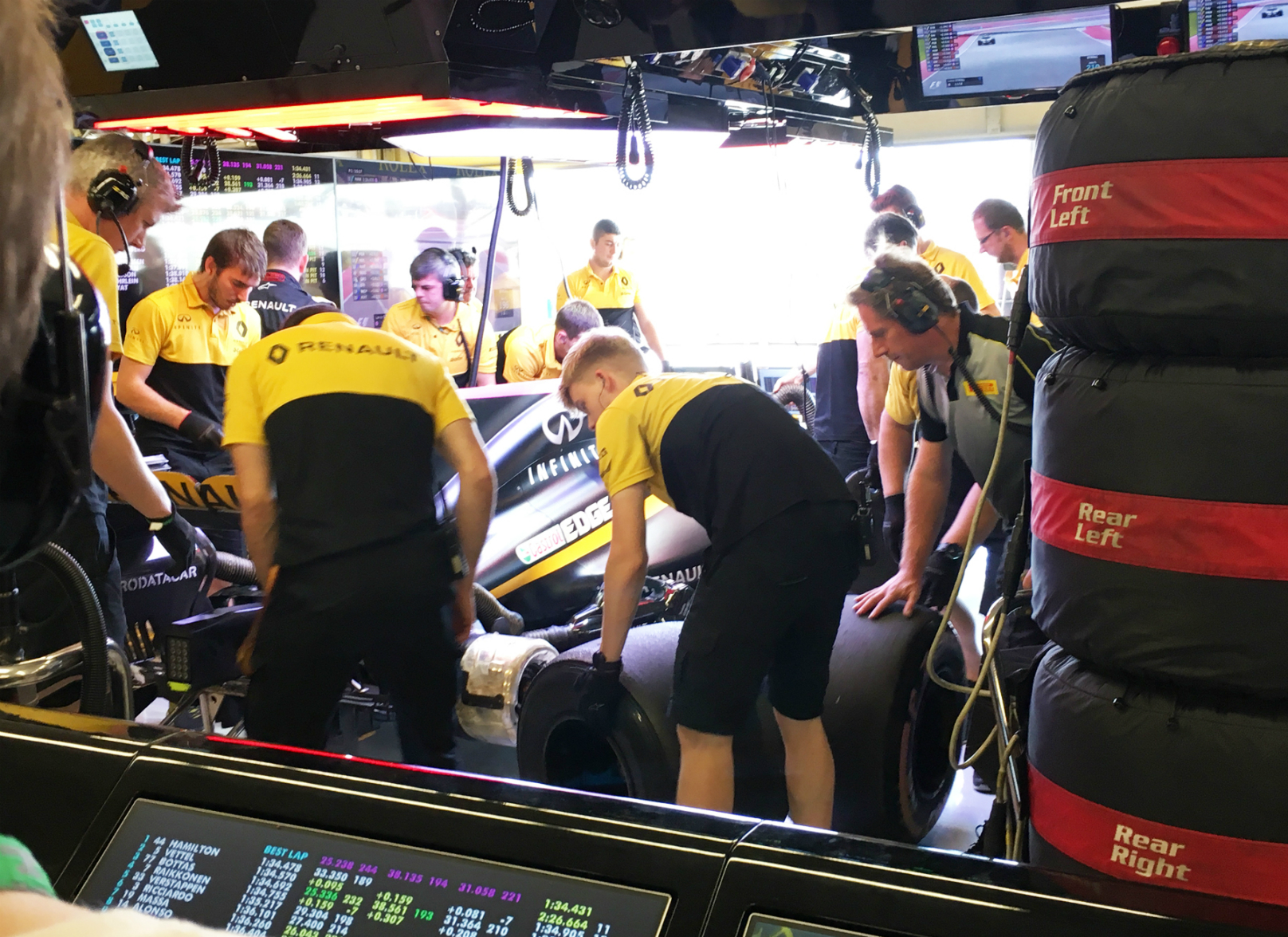 I was present for the second qualifying session and was anticipating a team frantically scurrying around trying to squeeze every little bit of power from the engine before sending it back out to try and beat its last fast lap, but

I was surprised to see the exact opposite. Every team member that was present (and there were a lot) knew exactly where they had to be, when they had to be there and exactly what they had to do at that particular instance. Everything was conducted with military precision without any panic, I was surprised at how cool and collected everyone was. Everyone involved with the car knew exactly what was expected of them as they carried out their duties at incredible speed but with enough control to make sure no mistakes were made. It was amazing to watch how fast the engineers and pit crew could get the car from the pit into the garage make crucial changes to the vehicles set up and have it back out onto the track. What made it even more impressive was that new driver Carlos Sainz had joined team mate Nico Hulkenberg only two days before practice and the whole team still managed to mold seamlessly together as if they had been doing it for years.

After the garage tour I was given the opportunity to sit down with Tommaso Volpe – Director , Infiniti Global Motorsport and for him to explain the importance of technical innovations at F1 race level being directly passed through to their core business of performance road cars. Tommaso explained that Infiniti had been directly involved with F1as a sponsor from the 2011 season with Red Bull Racing and Renault. When Renault decided to form its own factory team for the 2016 season. Infiniti seen it as an opportunity to be technically involved with the development of the engine and hybrid system – known as the Energy Recovery System (ERS) – in F1 rather than being “just” a paid sponsor. 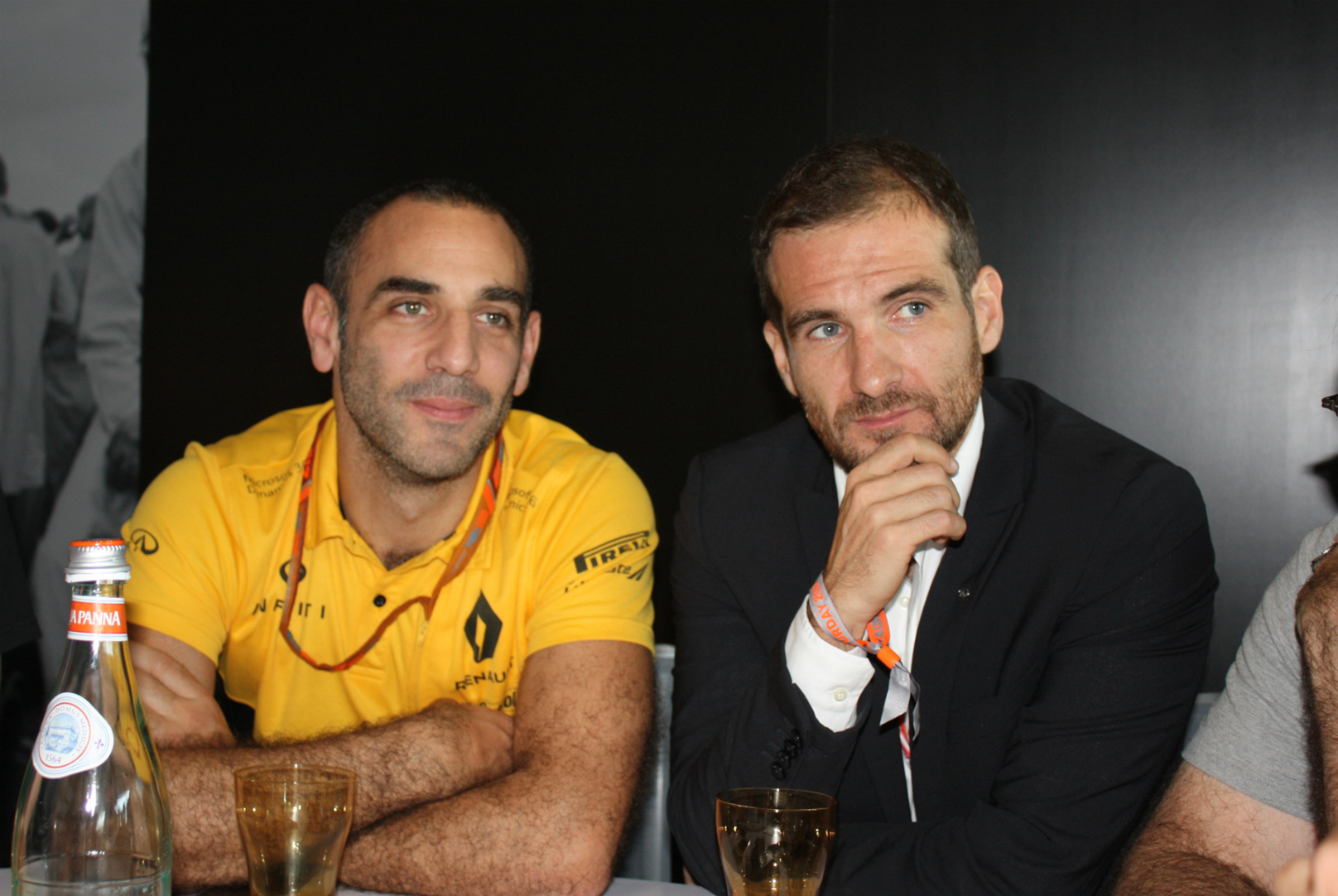 Infiniti were already at the forefront of performance hybrid technology and it seemed a natural progression to bring their technical expertise to the Renault racing team. It made perfect sense as both companies had just formed the Renault-Nissan Alliance”. Tommaso went on to explain “Infiniti were already working on a performance road car based on the Q60 Coupe platform called Project Black S.

The Project Black S will be a new performance model line that hints at a performance hybrid powertrain, inspired by the ERS found in the Formula One car.

The Hybrid system found on the Project Black S will harvest energy as in the F1 car and be used as a power booster rather than a fuel saving device, enabling instant, lag free acceleration and will be the first production car that will benefit directly from the F1 ERS system. The recovery System could contribute to a 25% increase in power for Infiniti’s 3.0-Litre twin-turbo engine”

Tommaso also explained that “Infiniti are not only investing in development of the ERS system but were also investing in the future of the Formula One team with their Infiniti Engineering Academy – a highly successful recruiting program that offers young engineers, from seven regions of the world, the once-in-a-lifetime opportunity to join a unique automotive-to-Formula One team placement.

With Formula One more relevant to the Automotive industry than ever our Academy engineers at the cutting edge of both automotive and motorsport engineering, we are perfectly placed to explore, understand and encourage the crossover of technology between our two companies and disciplines”.

Going to see a live Formula One race was exhilarating and educational. It was great to see how well a team actually works together with state of the art technology, but even better to see that the technology is actually being passed down the line to cars we will have the opportunity to drive in less than a years time.

Unfortunately on the day Hulkenberg had to retire after only a couple of laps but Sainz went on to finish in in an incredible seventh position – an awe inspiring race considering it was his first race in the car.

This is only the second year for Renault/Infiniti in Formula One, I am sure, with their technical expertise, we will be seeing many podium positions from them in the upcoming seasons.