The end of daylight savings time causes an increase in pedestrian collisions.

The Insurance Institute for Highway Safety has put 16 midsize cars and their pedestrian detection systems to the test, just in time for the end of daylight savings time and the increase in pedestrian collisions that comes with it.

IIHS data says that pedestrian fatalities have gone up 53 percent in the US since a low point in 2009. That means 6,000 killed last year. Similar statistics for Canada show pedestrian deaths up 10.5 percent from 2010 to 2016, and the trend doesn’t seem to be slowing down, much like drivers approaching crosswalks.

In response, automakers are adding more driver aids to try and reduce the number of collisions. That includes automatic emergency braking features that are designed to recognize other vehicles as well as pedestrians. The IIHS said that around 2/3rds of vehicles it tested in 2019 included pedestrian detection.

“Pedestrians are the most vulnerable road users, so it’s encouraging that pedestrian crash prevention systems are standard equipment in 12 out of the 16 midsize cars we tested, including five out of six superior-rated systems,” says IIHS President David Harkey.

The detection system testing includes three scenarios. The first is an adult pedestrian stepping out in front of an oncoming vehicle with an unobstructed view, the second is a child stepping out from between two parked cars, and the third has a pedestrian walking parallel to the vehicle, so walking alongside a roadway. The first two are tested at 20 and 30 km/h, the third at 40 and 60 km/h. In the test, the systems have “1 or 2 seconds to stop the car.” The tests are completed in daylight and dry pavement, so, the IIHS says, they may not represent nighttime performance, which is when many of the fatalities occur. 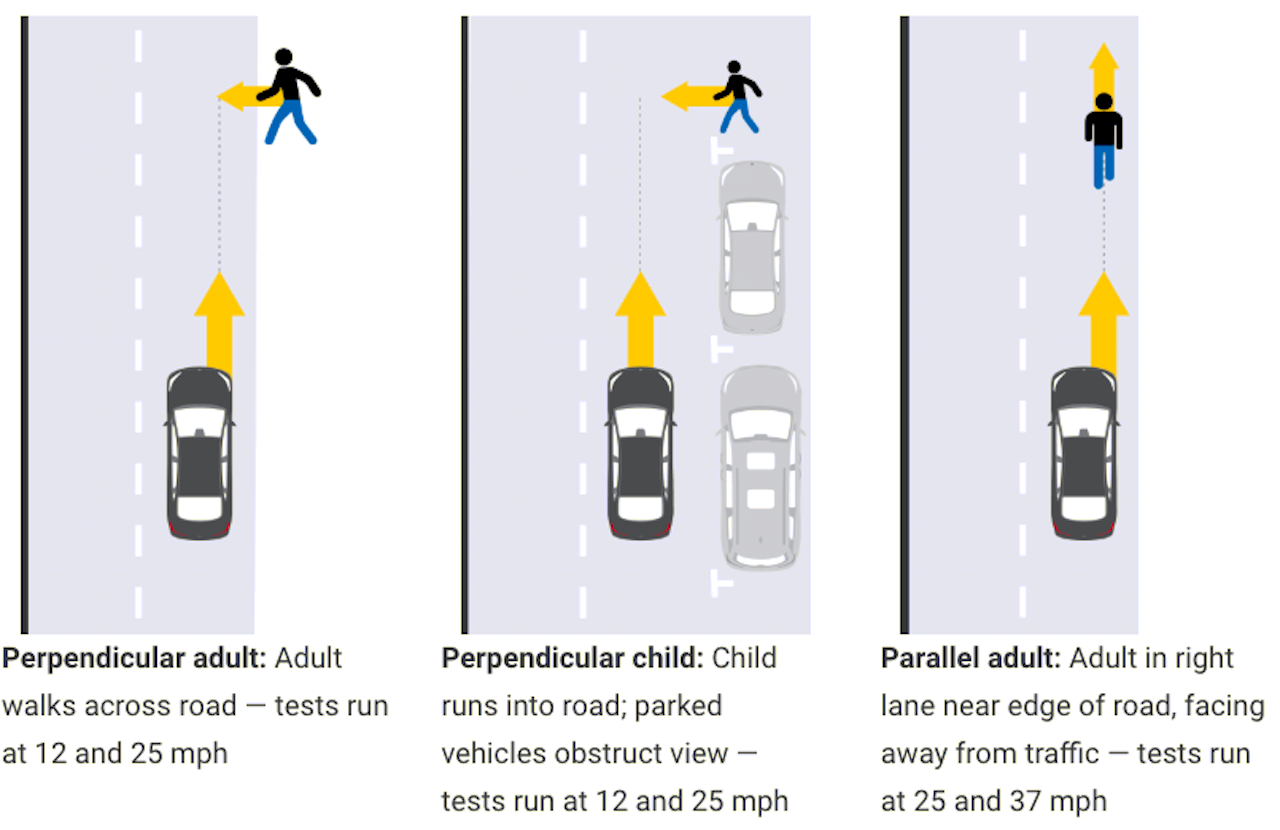 To get a top superior rating, the cars need to reduce their speeds dramatically or avoid contact. Advanced means a major speed reduction “though somewhat less consistently,” basic fails to slow in one or more, and no credit means multiple scenario failures. IIHS cites the Ford Fusion, which “did not slow at all in the tests simulating a child darting across the road and only slowed slightly in the scenarios approximating an adult stepping into the street.”

Top Superior score in the testing, which is all 2019 models unless otherwise mentioned, went to the Audi A4, BMW 3 Series’ standard system, 2020 Subaru Outback, the Mercedes-Benz C-Class’ optional system, Nissan Maxima, which was the only one to avoid the pedestrian in all scenarios, and the Volvo S60. Advanced went to the BMW 3 Series’ optional system, the Honda Accord, Lexus ES 350, Mazda 6, Nissan Altima, Tesla Model 3, and Toyota Camry. The Mercedes C-Class standard system, and both available Chevrolet Malibu systems rated Basic, and the Ford Fusion, Hyundai Sonata, and Kia Optima received no credit.

“The child dashing out from behind parked cars is a very challenging test,” says Harkey. “But it’s fitting that it was one of the main things that separated the top systems from the rest of the pack, since that is certainly a frightening scenario on Halloween or any day.”