‘I have a young daughter at home. Should I really be doing this?’

But a chance to be a passenger in a race-spec Porsche 911 GT3 with a professional race driver at the wheel . . .  now, that is a rare treat.

RACE-SPEED LAPS IN GT3 ARE BOTH EXHILARATING AND EXHAUSTING

But a chance to be a passenger in a race-spec Porsche 911 GT3 with a professional race driver at the wheel . . .  now, that is a rare treat.

When the opportunity arose, I jumped on it right away. But once I arrived at the track on one sunny summer afternoon and began the preparations, it wasn’t long before I was questioning my decision.

First, I was handed a waiver as I entered the grounds. That didn’t really faze me; I’ve signed those many times.

After I arrived at the pits, however, I was handed a second waiver. “Just in case the first one goes missing,” I was told. That gave me pause.

Then I was asked: “Do you need to empty your bladder?”

“I’m sure I’ll need to by the time this is done,” I snapped back with a laugh.

“No, I’m serious,” was the reply. “You could seriously injure yourself.”

Oh, dear, I thought. What have I gotten myself into?

I then met the man in whose hands I was placing my well-being: Marco Cirone, the driver of the No. 88 car for the Mark Motors team in the Ultra 94 GT3 Cup Challenge Canada by Michelin.

He greeted me by telling me he’s been racing here for 10 years — an attempt to reassure me that I was in good hands. I was still having doubts.

Next, I was given earplugs and a helmet, and then I was shown to the car and pushed into the seat. (Quite literally and forcibly, I might add. Racing seats are not designed to accept women of child-bearing age.)

The belts were tightened around me. This took some time. You should not be able to move at all if you’re strapped in properly, I was told.

I was advised to keep my knees tucked together and my hands on my elbows to ensure I didn’t send a flailing limb into the way of the driver while he was shifting. I curled myself up into the fetal position, essentially. It seemed appropriate.

Cirone then briefed me on his procedure. He would take two warm-up laps to grip up the tires. Once he was given the all-clear signal from the pits, he would accelerate to full speed. It would be hard to hear, so if I started to feel sick, I could give him a thumbs-down signal to let him know to stop.

Before I had a chance to wail out a protest, we took off.

We worked our way slowly (in relative terms) through the first series of corners, around the hairpin, and on to the Mario Andretti Straightaway.

Out of the corner of my eye, I noticed a marshal waving a blue flag. Half a second later, a competitor car passed us to our left and was gone over the crest of the hill in the blink of an eye.

My second thought: I have a young daughter at home. Should I really be doing this?

I hardly had time to let those doubts fester before Cirone received the signal to go. All six cylinders and 450 horses in the Porsche 911 GT3 R were off like a shot.

I’ve loved motorsport for most of my life, but I was still taken aback by the full sensation of sheer, unadulterated speed.

As I found myself shifting around in my seat from the g-forces, I wondered for a moment whether my belts actually were tight enough.

On our first time through turn 2 at speed, I noticed right away how challenging it is. The approach to this double-apex corner is very bumpy and is compounded by the immense pull that the downhill rotation puts on the driver’s head as the car descends eight storeys through the turn. It’s extremely hard on the neck.

“Turn 2 is one of the most difficult corners in all of North America on any racetrack,” Cirone later informed me.

But as crazy as it feels to go through turn 2 in its current configuration, Cirone reminded me it was much more dangerous before a runoff was added, as part of changes to the track during the past off-season.

“If you made a mistake in the old days in turn 2, you’d go off and you’d hit the grass and you’d actually accelerate,” he said. “There was no saving the car whatsoever.”

The next thing I noticed was how intricate the approach and the shifting sequence are going through the hairpin, officially named Moss Corner. Cirone later explained his ideal execution.

“What I usually do is go down two gears just before making the turn into 5a — kind of arc it, and then really try to get on the accelerator early coming out of 5b.

“It’s really technical, and if you ask every driver, they’ll probably give you a different opinion on how to do it.”

By our third time around, the only thing on my mind is the heat. The temperatures in the cockpit soared, and I was sweating so much that it was dripping down my face inside my helmet — and I wasn’t even the one doing the work.

“It’s still 45 minutes in the car,” Cirone said. “Temperatures in there can reach 120 degrees on a hot day.

“We do have the availability to run a cool suit, which is a little tank that runs beside us and pumps ice cold water through a special shirt that we have, so that keeps us cool. But certainly, after 45 minutes of being in that heat, it affects you.

“There is a little bit of training that we do to try to get used to that kind of heat. When I go to the gym, I’ll usually wear a couple of extra layers to sweat.

“That does help a little bit, but you just have to fight it out when you’re in there. You have no choice.”

By the time I climbed out of the car, I was exhilarated but mentally and physically exhausted.

“Careful,” a team member said to me as I walked it off afterward, struggling to catch my breath and calm the adrenaline. “It’s addicting.”

Having now experienced the sensation of going faster than 250 km/h, I can certainly understand what he meant. 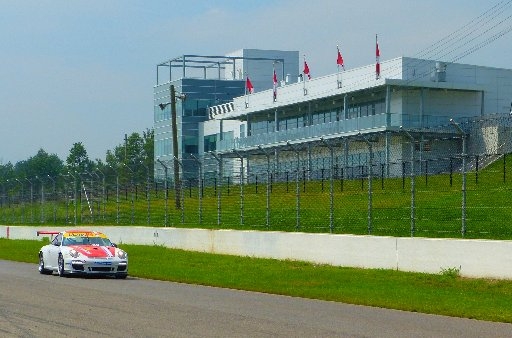