Hyundai Group plans to sell one million BEVs by Mid-decade

The Hyundai Group is aggressively ramping up its all-electric vehicle efforts, pledging last night to sell one million all-electric vehicles by mid-decade, announcing it will bring 23 all-electric models to market around the world by 2025, with about half of them based on an all-new dedicated EV platform it revealed called E-GMP.

Hyundai, Kia and Genesis will all offer multiple E-GMP battery-electric vehicles (BEVs) by then, confirmed company executives in the global online media reveal of the new EV architecture. This is almost double the company’s prediction of “over 500,000” EV sales made just last year, when company officials in October 2019 said the Hyundai Group would produce 16 models by 2025, with sales of roughly 560,000 plug-in vehicles.

Similar to GM’s Ultium platform and batteries, the Hyundai Group’s E-GMP (for Electric – Global Modular Platform) architecture is a dedicated BEV platform that can be stretched to various sizes, with battery modules that can also be added and removed based on the size and type of vehicle, as well as performance objectives. It will come standard with rear-wheel drive, with all-wheel drive variants available, and will typically be offered in larger and more performance-oriented vehicles, said Fayez Abdul Rahman, Hyundai’s senior vice-president of vehicle architecture development center at a technical briefing to detail the E-GMP architecture.

The new technology and modular new-generation batteries will be able to power E-GMP vehicles to over 500 km on a full charge (WLTP), which typically translates to roughly 400-450 km of range in Canada using our five-cycle EPA-based Natural Resources Canada testing methods. With its faster 800-volt charging speeds, it will be able to reach an 80 per cent charge in 18 minutes, according to the company, using the (now rare, but growing) 350 kW-capable charging speeds on the latest L3 high-speed public chargers.

There will be at least one high-performance model on the E-GMP platform aimed at driving enthusiasts, which will accelerate to 100 km/h from a standstill in “less than 3.5 seconds” and a top speed of 260 km/h, said the company, providing no details on when or which Hyundai Group brand will receive the model. 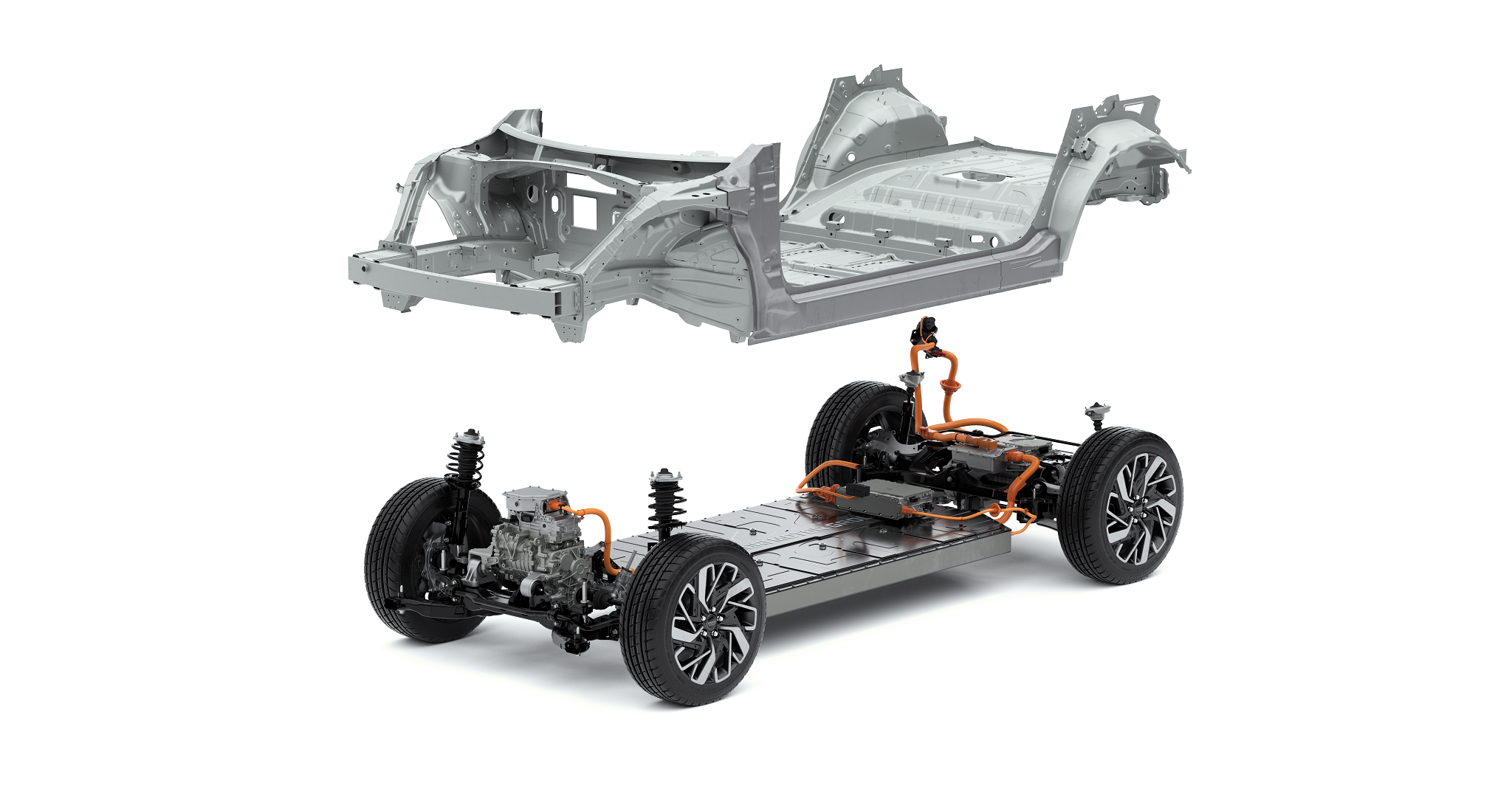 Speaking of the Kia, Genesis luxury and Hyundai brands, with 11 of the planned 23 models being based on the E-GMP platform, many of the upcoming BEVs will offer similar size, range and possibly performance characteristics. Officials said the models would be differentiated heavily by their design, both interior and exterior, as well as unique features.

The first vehicle to use the E-GMP will be the Hyundai IONIQ 5, the first to of a sub-brand of all-electric vehicles using the Ioniq name and then a numeral as a differentiator, with IONIQ 6 and IONIQ 7 models to come by 2024. Kia will also introduce an all-new BEV in 2021, and has committed to making roughly 20 per cent of its sales all-electric by 2025, a similar proportion to what the Hyundai Group has newly publicly declared last night.

This of course doesn’t mean that all 23 BEV models will be available in all markets, of course, with the company admitting that a large proportion of the BEVs coming next year will be earmarked for Europe, thanks to legislation that issues fines for companies that don’t meet increasingly stringent carbon dioxide (CO2) fleet emissions limits. Companies such as FCA and others have had to pay millions of Euros to Tesla to buy credits to avoid even larger European Union fines for their fleet of relatively thirsty and largely non-electrified vehicles.

Interestingly, Hyundai confirmed that it will continue to sell and refine its current electric vehicles, which are based on internal combustion engine (ICE) platforms, and tend to be smaller and less powerful than E-GMP vehicles will be. This means that there will continue to be battery electric, plug-in hybrid and/or hybrid versions of vehicles like the Kia Niro, Hyundai Kona, and Kia Soul, and perhaps even a continuation of the Hyundai Ioniq as a model, despite potential confusion with Hyundai’s upcoming all-electric IONIQ EV sub-brand.

The company also said that E-GMP vehicles will offer bi-directional charging thanks to a newly developed Integrated Charging Control Unit (ICCU), which will allow them vehicle to load (V2L) capabilities at launch, such as the ability to power small appliances at up to 3.5kW when camping, or a 55-inch TV and a mid-size air conditioner for up to 24 hours. That said, they are also waiting for standardization of vehicle to grid (V2G) regulations, which will allow E-GMP vehicles to be used as a backup power source for people’s homes.

As released, the vehicles’ quick charging capabilities will be able to add roughly 100 km of driving range in five minutes, but outside of its confirmation of 500+ km of range under WLTP testing conditions, didn’t detail maximum charging speed or planned battery sizes, which may vary by market, said the company. 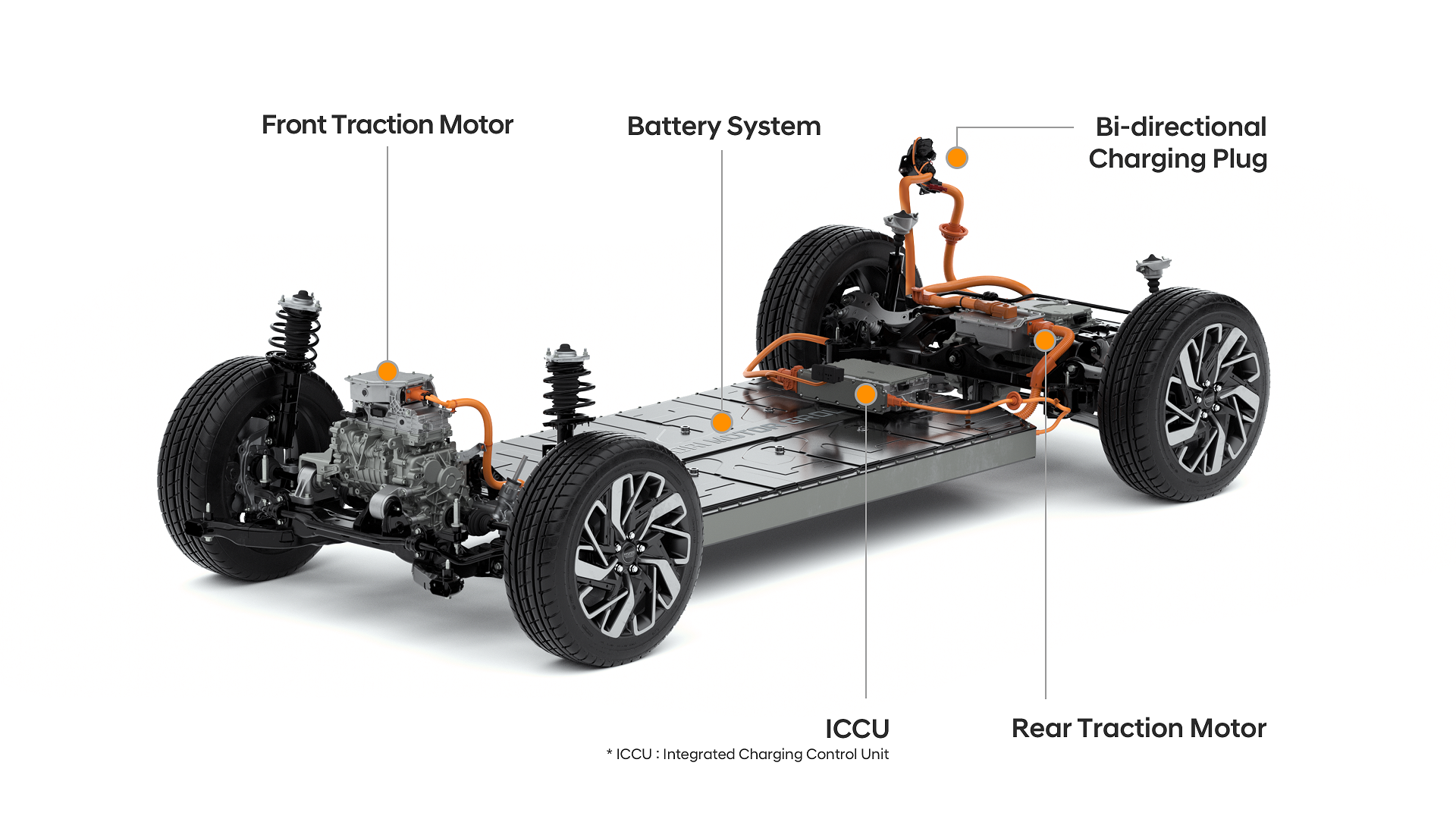