IONIQ 5 will come in both single and dual-motor trims and will arrive in December.

The options for customers seeking a reasonably priced electric vehicle with long-legged range just keeps getting better. When the crew at Hyundai announced the curiously capitalized IONIQ 5, they appeared to be targeting a driving range in excess of 450 kilometres in some trims and a sticker price permitting it to qualify for Canadian EV rebates.

According to Hyundai, the entry-level Essential trim will carry a tag of $44,999 and have an estimated range of 354 kilometres. Making a $2,000 walk to the Preferred trim brings a few extra creature comforts, but no boost in range. That honour is reserved for the Preferred Long Range models, with a single-motor option estimated to provide a towering 480 kilometres of driving distance from a fully charged battery. That model will cost $51,999.

There will also be a brace of trims offered with all-wheel drive. These dual motor machines trade range for traction and acceleration, with the $54,999 Preferred AWD Long Range packing a 415km estimate and the $59,999 Preferred AWD Long Range Ultimate checking in at 400 kilometres. Like the two models at the other end of IONIQ 5’s trim walk, the difference between those two machines is largely down to creature comforts; those items add weight, explaining the smaller range of the more expensive Ultimate. 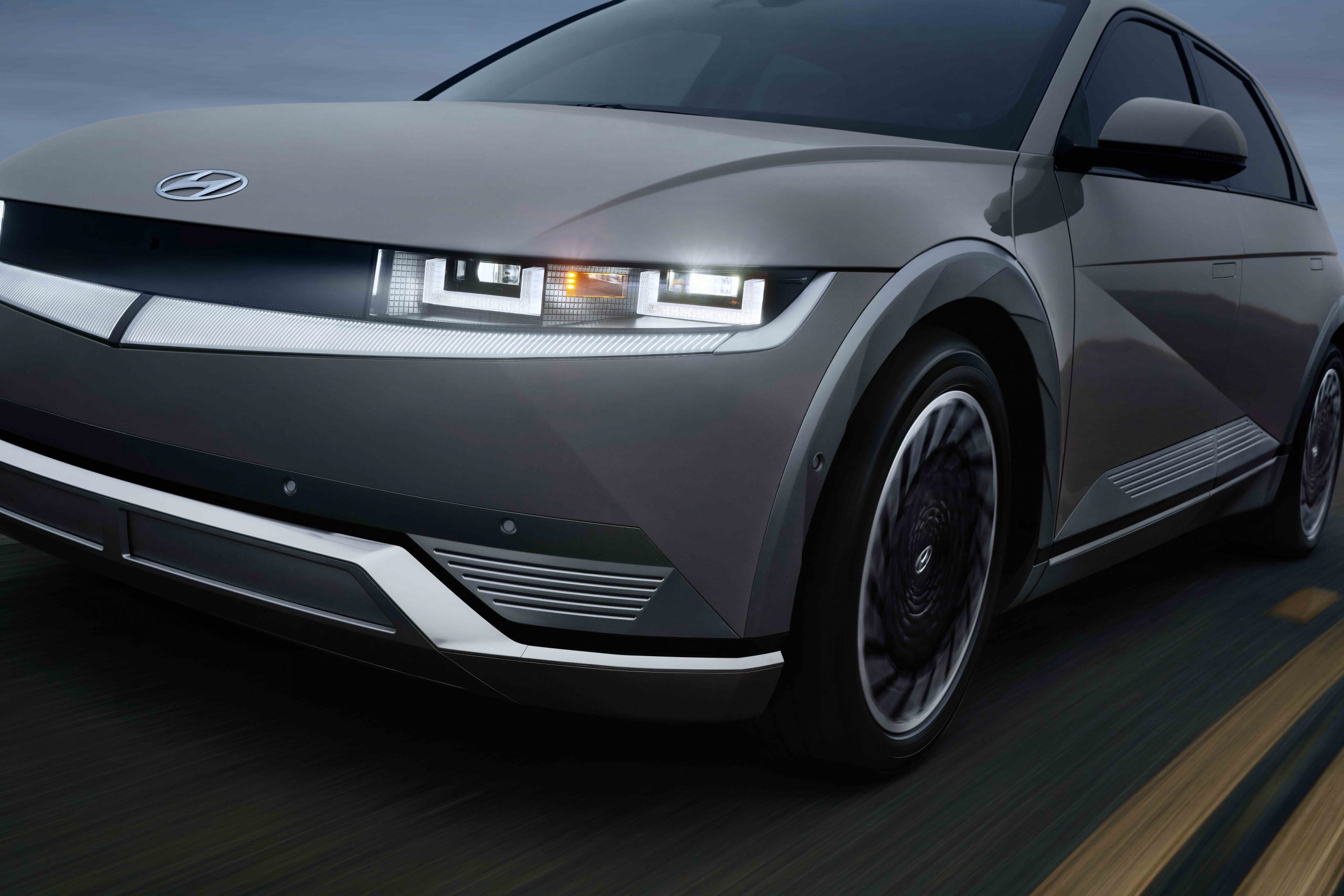 IONIQ 5 rides on Hyundai Motor Group’s Electric-Global Modular Platform (E-GMP) and is part of their plan to introduce 23 BEV models and sell a million BEV units worldwide by 2025. Its available 800V multi-charging system will permit juicing the car from 10 to 80 per cent in less than twenty minutes, assuming the service to which you are connected is capable of heaving out that amount of electricity. A Vehicle-to-Load (V2L) function can power small appliances, devices, and even charge other EVs.

Standard Range cars have a 58 kWh battery while Long Range units deploy a 77.4 kWh honker. A top tier all-wheel drive dual motor setup is said to produce a combined power output of 320 horsepower and 446 lb-ft of torque, making an IONIQ 5 so equipped able to scoot from zero to 100 kilometres per hour in just 5.1 seconds. The single-motor layout with a rear motor and long-range battery offers 225 horsepower and 258 lb-ft of torque funnelled through the rear wheels. 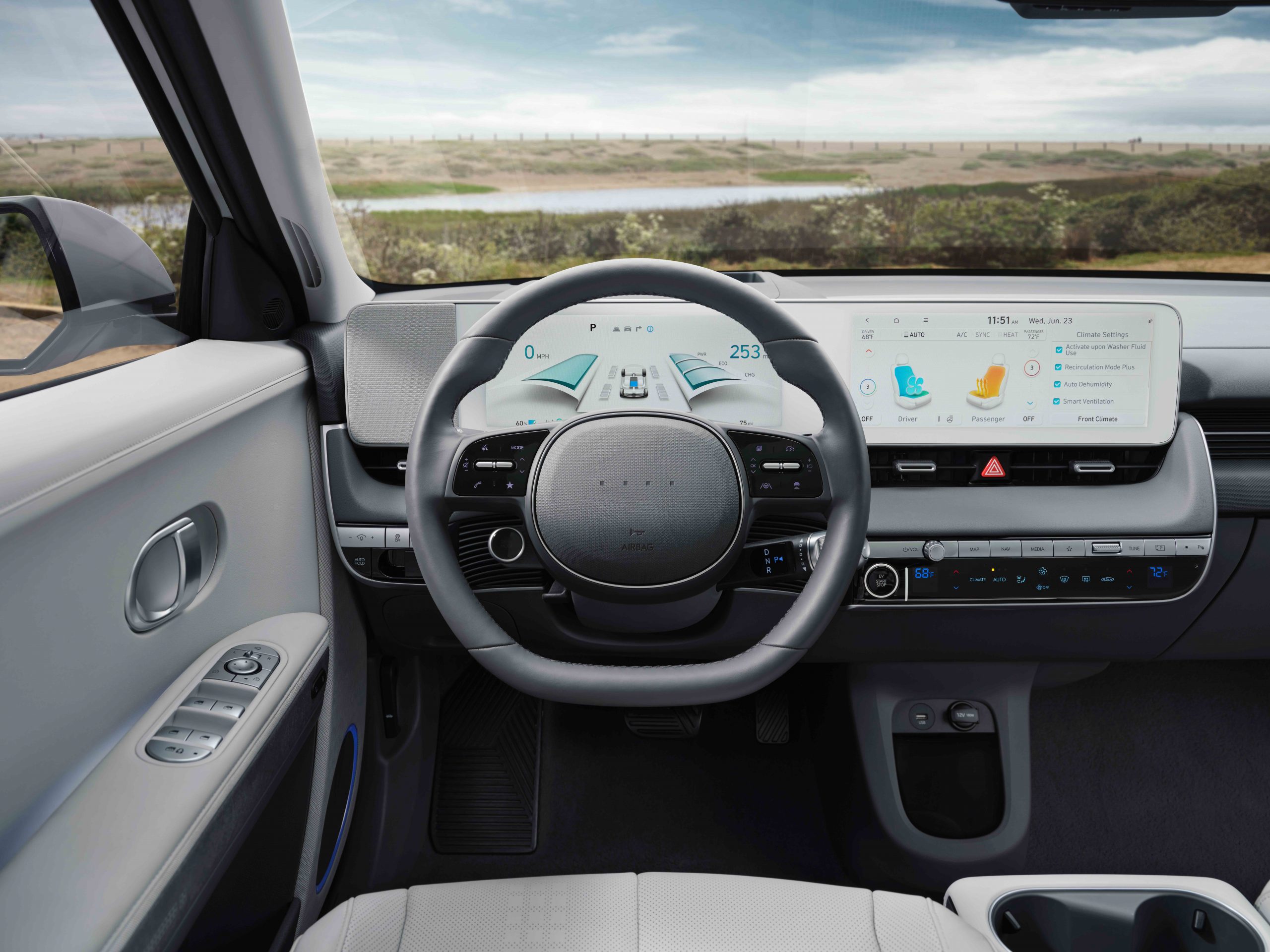 The world first saw the IONIQ 5 general shape at the Frankfurt Auto Show in 2019 when it appeared as the Hyundai 45 EV Concept. The production vehicle seems to have retained much from the show car, including a minimalistic interior and exterior lighting signatures which are somehow modern and retro at the same time. Its fastback profile looks good in person, and the interior is plenty suitable even for this well over six-foot human.

Despite the global supply chain challenges which are affecting every automaker, Hyundai expects the first units of the IONIQ 5 will start arriving in Canadian showrooms this December. They will be distributed across Canada and prioritized to over 2,000 customers who have submitted pre-orders.