In case you haven’t been keeping up, Mazda brought four-wheel locomotion to its popular compact car in 2019. The following year, turbo power was introduced to the nameplate. These two much-appreciated add-ons gave an already stellar compact car even more endearing quality.

But I’m not here to talk about the car. I’m sure this website has plenty of information about how the new Mazda3 Turbo drives and feels. What I want to talk about is how its all-wheel drive system operates during a stout Canadian winter. And, well, since the entire province of Quebec was being attacked by a thorough blizzard during the week I had this charming little sport compact, I had to brave the elements and give the system a good test.

Before I go into the specifics of how the Mazda’s i-Active AWD works, allow me to first give you a crash course on the different types of systems currently on sale. The auto industry mainly utilizes reactive and predictive systems. These, by the way, do not include the four-wheel drive systems found in trucks and full-size SUVs. Those are in an entirely different category.

Due to packaging and efficiency reasons – especially in vehicles that utilize a transverse engine layout – reactive systems have gained a lot of traction (excuse the pun) in recent years. These systems, which have found their way in a wide variety of cars, crossovers and even minivans, automatically engage all-wheel drive when wheel slippage is detected. By default, the vehicle is front-wheel drive and activates the rear axle on demand through some sort of clutch system.

The biggest benefit of these systems is improved fuel economy. However, their reaction delays can prove problematic at times. While it’s true that modern sensors and computing power have significantly improved the reaction time of such systems, they still rely on their environment to react. In other words, the time it takes for the system to understand what it needs to do can split the difference between hitting that road barrier or drifting away from it. 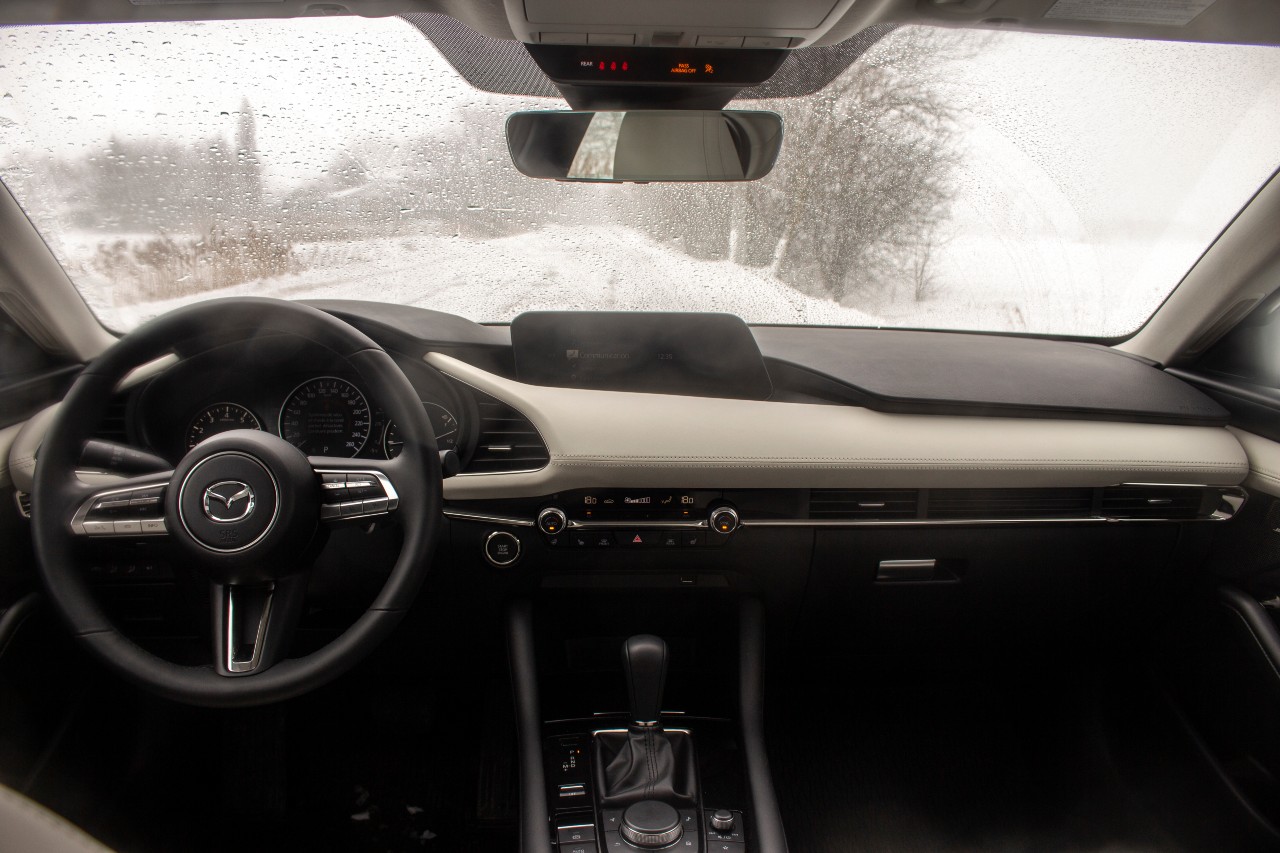 Most modern compact crossovers, like the Honda CR-V or the Toyota RAV4, are fitted with this technology.

Predictive systems, on the other hand, are constantly engaged. In other words, they’re always prepared for wheel slippage. Also known as full-time systems, they continuously distribute power to all four wheels. This, of course, improves traction and the vehicle’s reaction times on slippery surfaces, but leads to more complication in packaging (for transverse engines). It also has a negative impact on fuel economy. Subaru prides itself of having a predictive system, but it’s also thanks to the longitudinally mounted Boxer engine that it can be done.

Now, what if you could develop a system that could blend both technologies in one? That’s precisely what Mazda tried to do in the Mazda3. And the results are rather convincing.

I’m going to do my best to dumb all of this down, because it can quickly become confusing. Due to the Mazda3’s transverse engine layout and compact dimensions, it would have been inconceivable to fit the car with a predictive all-wheel drive system like Subaru.

On the other hand, Mazda also didn’t want to have to deal with a reactive system’s engagement delays. In other words, Mazda wanted the Mazda3 to handle like a Subaru, without losing out on fuel economy and efficiency.

To achieve this, the i-Activ system relies on sensors and computing power. By continuously monitoring wheel slippage, weight transfer, steering inputs and even outdoor temperatures, Mazda’s processors can – according to the carmaker – predict when torque needs to be distributed to the rear wheels. It goes even further than that. In some cases, the system will continuously send a small percentage of the available torque to the rear wheels as a preventive measure. 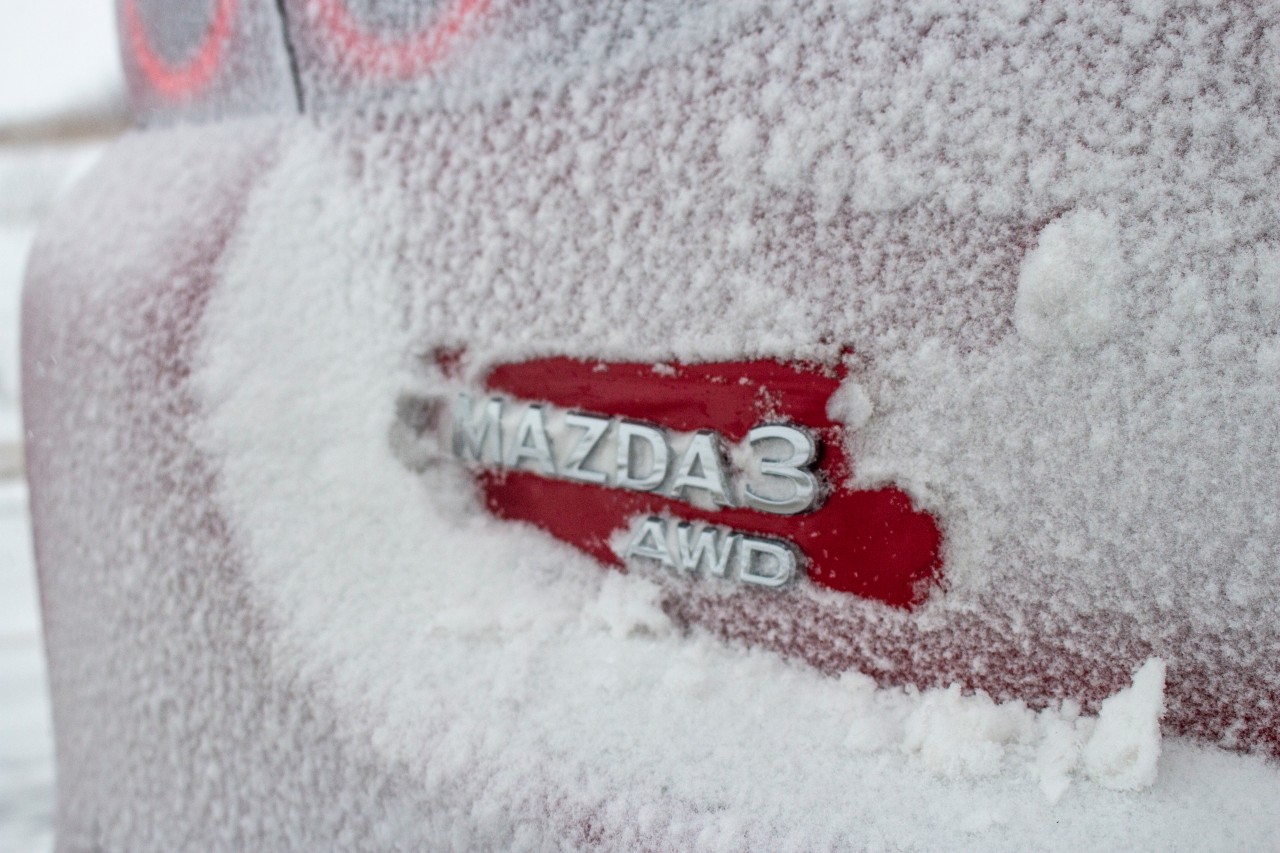 This is done once the computer has analyzed driving habits, outdoor conditions and a slew of telemetric parameters. In other words, very much like semi-autonomous Lidar sensors scan a vehicle’s environment, Mazda’s i-Activ system constantly compiles data in the background to predict what’s coming next. By having even only 10% of the available torque continuously distributed to the rear of the car, the system’s reaction times become far shorter than in a conventional reactive system. See it as a hybrid that combines the best of both worlds.

Obviously, driving through a winter blizzard always means being well prepared. Even if your car is fitted with a super sophisticated all-wheel drive system, a good set of winter tires, reduced speeds, a properly brushed off vehicle and a full tank of windshield fluid are a must.

But yes, the benefits of Mazda’s system can quickly be observed out there on the road. The immediate sensation behind the wheel is that understeer (when the car plows forward) is considerably reduced. It’s therefore much easier to rotate the car towards a given direction when sliding. 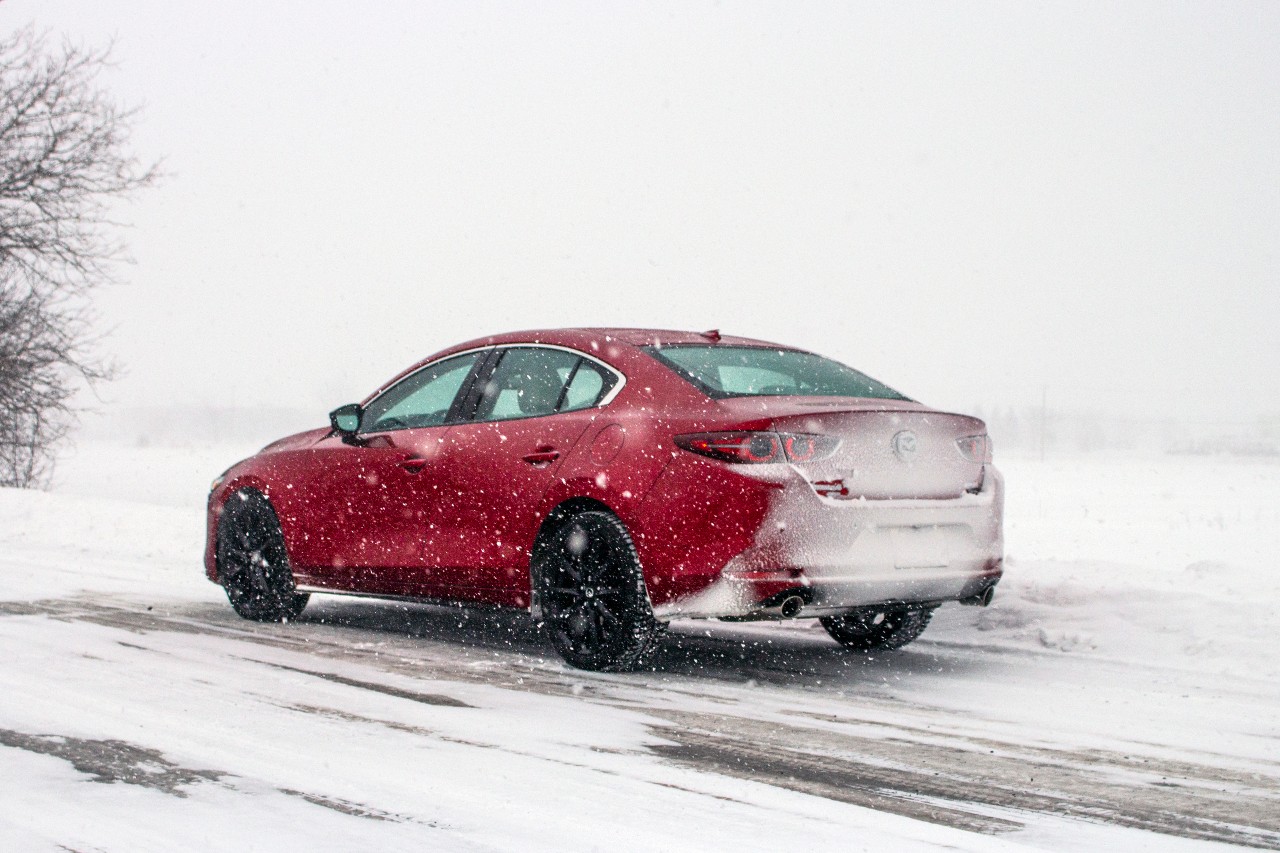 The moment you stab the throttle, the Mazda3 kicks out its stubby rear end, revealing a system that has already processed that torque must be sent to the back. The operation is seamless and, in many ways, manages to mimic Subaru’s system. There’s also a degree of balance and harmony in the way the Mazda3 carves its way through a snowy corner. This in turn increases driver confidence, hence improving overall safety.

That said, Subaru remains ahead of everyone due to the Boxer engine’s low center of gravity. I mean, you can’t beat physics.

But Mazda has the next best thing, all while retaining the Mazda3’s fun to drive character and class-leading fuel economy (I averaged 9.2L/100 km while I had it). Add to that punchy turbo power and build quality that would put expensive German sport sedans to shame, and it’s clear that this little Mazda has all the ingredients to have you reconsider Audi A3 ownership