How do you out-legend your own legend?

To create the successor to the Beetle, VW pulled a Rabbit out of its hat

The challenge for Volkswagen was far from a simple one. Create a new, and more modern follow-up to one of the most successful automobiles of all time: the Beetle.

A tough act to follow, but the result was the Rabbit, which was a groundbreaking creation that raised the import bar several notches. It’s a car whose popularity spawned many visual copies from other manufacturers.

Originally developed in the 1930s by Ferdinand Porsche, the Beetle became the salvation of the German economy following the Second World War. Starting in the early 1950s, millions of Bugs were exported around the world. In North America, the Rabbit attained cult status, attracting people of all ages who wanted cheap wheels and to stand apart from the crowd.

But, by the late 1960s, Volkswagen’s one-trick machine had become more like a quirky contraption and sales suffered, especially considering lower-priced and more- capable competitors from Japan. General Motors and Ford were also playing the small-car game with the Chevrolet Vega and Ford Pinto. The wheezy, underpowered and overpriced Beetle simply couldn’t keep up with the pack.

Volkswagen had a successor in the pipeline, one that was loosely based on the Audi 50 (Audi became part of Volkswagen in 1964). Called the Golf in Europe, the car was given the cutesy Rabbit label for models exported to North America. 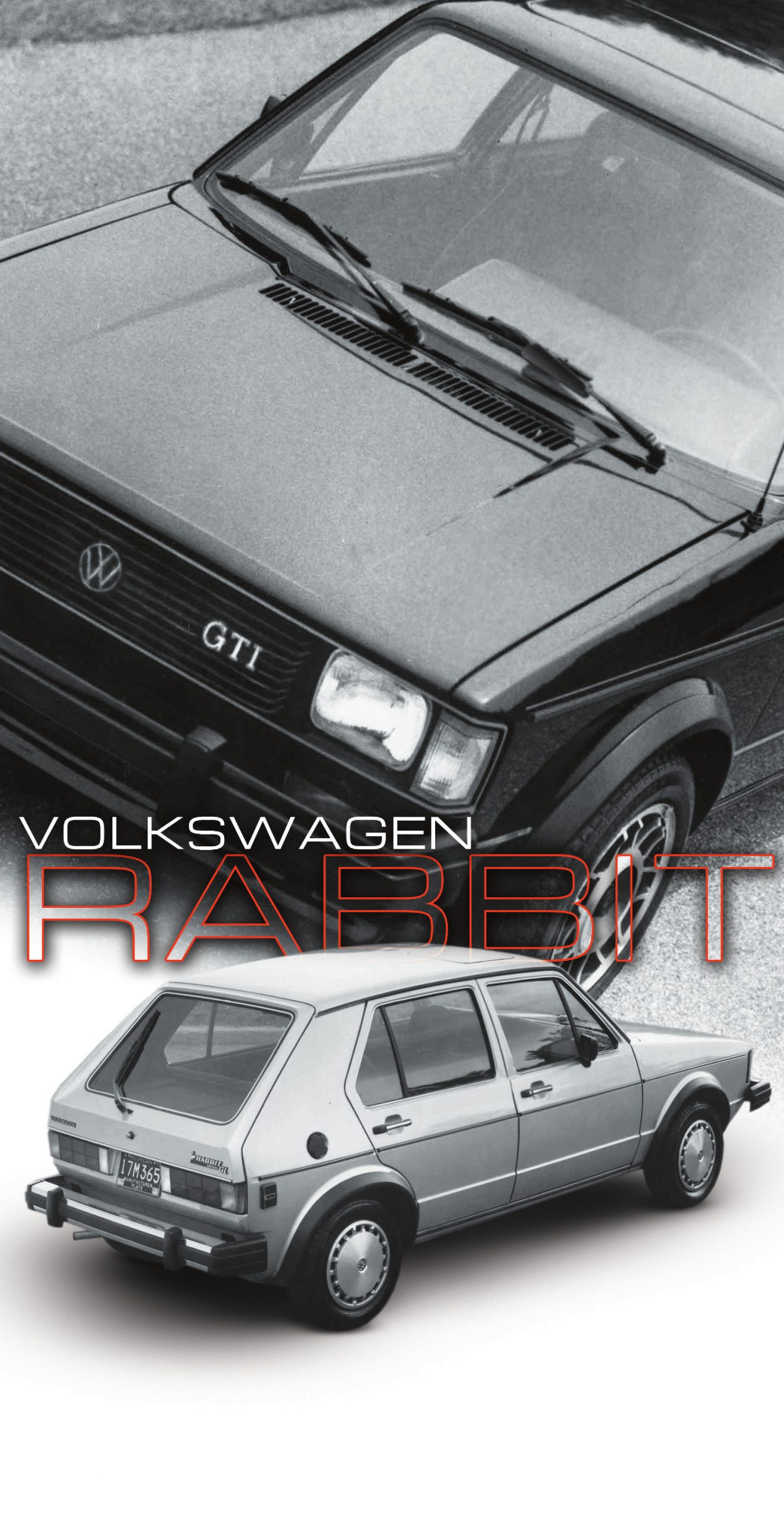 It was also as far removed from the venerable Beetle as you could get. Styling was the work of famed Italian designer Giorgetto Giugiaro. The water-cooled engine was placed in the front (the Beetle’s air-cooled engine was out back) and power was sent to the front wheels. The rest of the car blended both the passenger compartment with the stowage compartment, a layout previously reserved for bulkier station wagons. Access to the cargo hold, which could be expanded by folding the rear seat, was through a hinged opening that included the rear glass. It was the dawn of the hatchback.

None of the Rabbit’s features seem particularly outstanding by today’s standards, but the car caused a sensation when it was introduced for 1975. Although lacking the Beetle’s charm, the blocky looking Rabbit made up for this deficiency by being ever so practical. Both two- and four-door versions (or, three- and five-door, if you count the hatch) offered plenty of passenger space and could carry more luggage than some cars twice its size.

The Rabbit was also capable of quickly getting up to speed, a feat that was nearly impossible with the Beetle. The standard engine was a transversely (sideways) mounted 70-horsepower 1.6-litre overhead-cam four-cylinder, while a similarly sized 50-horsepower/50-mpg diesel was optional.

Like the furry genuine articles, Rabbits began to quickly multiply. The car received a mild restyling in 1979, the same year Volkswagen opened its first North American manufacturing facility in Pennsylvania. The next year, a cute little pickup, known as the Caddy, joined the fleet, followed by a convertible sent to replace the Beetle ragtop that had managed to hang on until 1979. 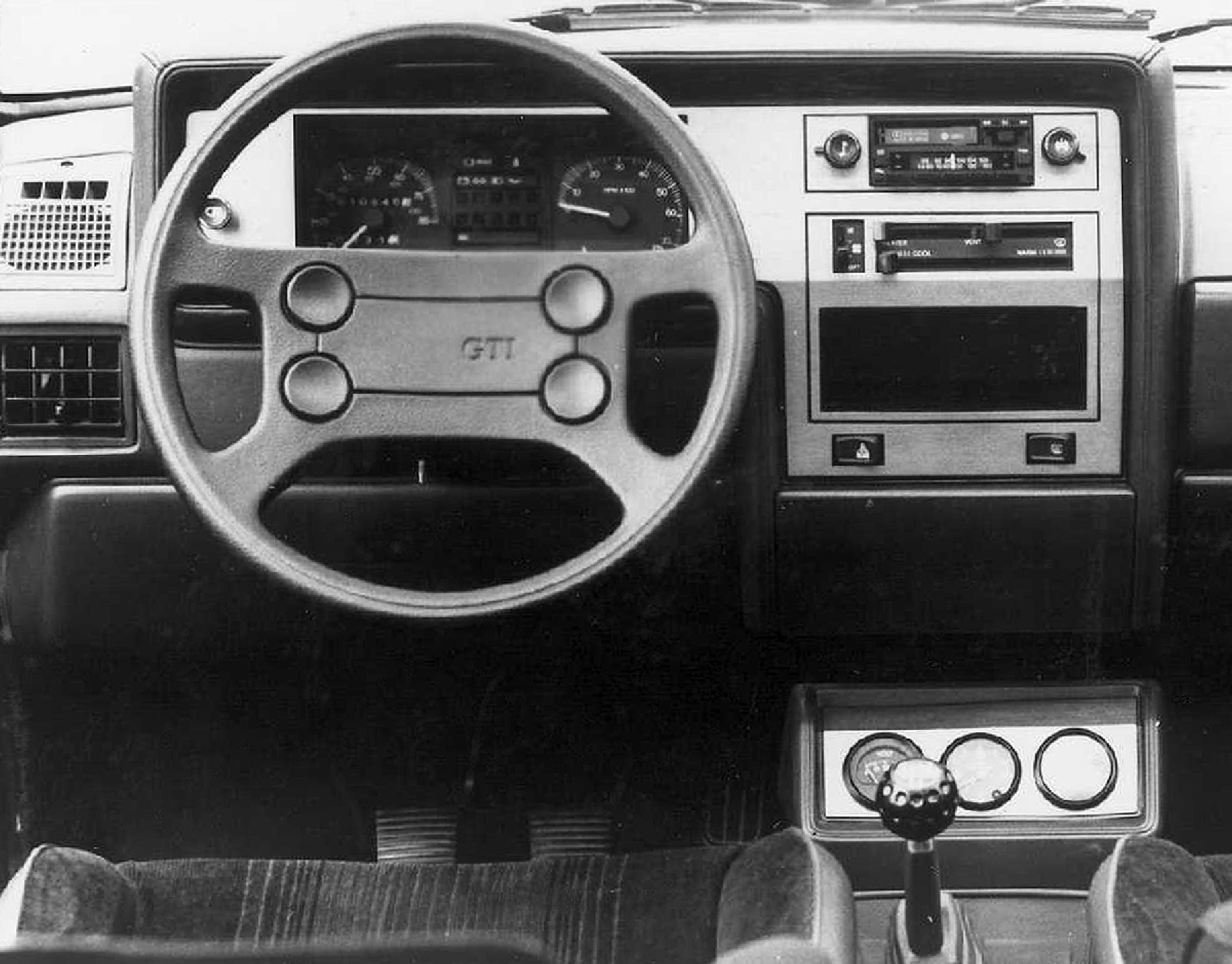 Performance buffs were also included in the Rabbit’s expansion plans.

Predating today’s sport compacts by nearly two decades, the Rabbit GTI, launched in 1983, featuring a fuel-injected 1.8-litre engine that delivered its 110 horsepower through a five-speed gearbox. The rest of the package consisted of a dropped suspension to aid handling, alloy wheels, sporty Recaro bucket seats and special trim. To this day, the original GTI is considered a classic for its sports-car-like handling and punchy throttle response. The Rabbit name, which was well-known in North America, was also dropped in favour of the Golf (the name means Gulf in German) brand for the sake of uniformity.

Like the Beetle that predated it, the Rabbit had become the prime ambassador for Volkswagen in Canada and the United States. It introduced car buyers to the benefits of front-wheel drive efficiency and made popular a body style that nearly every other mainstream manufacturer attempted to copy: the hatchback.