He started as an Indy car driver with a stock block engine and then became an owner and administrator. But some things have never changed for Dale Coyne, starting with chasing money.

At the first Toronto Indy in 1986, the “have” half of the field was sponsored by Budweiser and Miller Beer, Marlboro cigarettes, True-Value Hardware stores, 7- Eleven and Duracell. The teams were well-funded and the signage on the cars and transport trucks was the same at the end of the season as it had been at the first.

There were other, less well-funded teams, and then there was Tony Bettenhausen. The third son of the dirt-track, open-wheel pheenom Tony Sr., known to one and all in the 1950s as “the Panzer,” Tony Jr. was what is known in the trade as a low-buck racer.

Hauling an Indy car in a pull-along trailer, with a crew that was made up more of volunteers than full-time, paid employees (their expenses were paid when they were on the road), Bettenhausen went from race-to-race selling “local” sponsorship.

For that first Molson Indy (as it was known at the time), Bettenhausen got support from Sony Canada, an arrangements that went on for the next couple of years.

Things have improved somewhat over the hears for the “have-nots,” in that their positions are a little more secure than the near-hand-to-mouth existence of the early days.

Take team owner Dale Coyne. He started racing formula cars in SCCA amateur classes (after going with some university buddies to a racing weekend at Road America in Wisconsin and falling in love with the sport) and went racing in CART in the early 1980s with a stock-block Chevrolet (as compared to pure racing engines of the day like Cosworth and Chevrolet).

He then became an owner, putting other drivers in the car, actually was in charge of the series for a short time when things fell apart for awhile, and has been a two-car team entrant ever since. His drivers this weekend at the Honda Indy Toronto are full-time racer Conor Daly and part-timer Luca Filippi, who finished second here a year ago.

Despite his apparent stability, Coyne still goes weekend-to-weekend and freely admits his team is only racing on the streets of Toronto because of the involvement of Kitchener company IMPCO Technologies, a manufacturer of products that enable internal combustion engines to operate on less expensive, cleaner burning fuel that promotes both energy independence and a cleaner environment.

“We’re here because of IMPCO,” Coyne said in an interview. “They came aboard, they’ve supported Luca (Filippi) in the past, They’ve been on the car the whole year on a small space but they’re supporting the whole car up here.

“It’s a strategy thing; it’s targeted. You know people in the past who might have sponsored a race or a group of regional races. Even Menard’s with Penske, they just want to be involved in the U.S. Midwest because that’s where their stores are at.”

Coyne said that, in the beginning, he was able to do things on the cheap because he was getting help.

“We had a lot of help from the manufacturers,” he said. “I don’t think we hardly paid for anything. The piston manufacturers – all those guys – were happy to give us stuff. We did it for financial reasons; it (the car) was pretty cheap to run.

“It wasn’t competitive at all, though. It was great in second gear but by the time you got to third, those cars that had Cosworths were gone. I’m glad we did it when we did it. It enabled us to get in here.”

Coyne said that although he thinks it’s possible for a lower-buck stock block engine to run and be competitive in today’s Indy car series, he’s also certain it won’t happen. 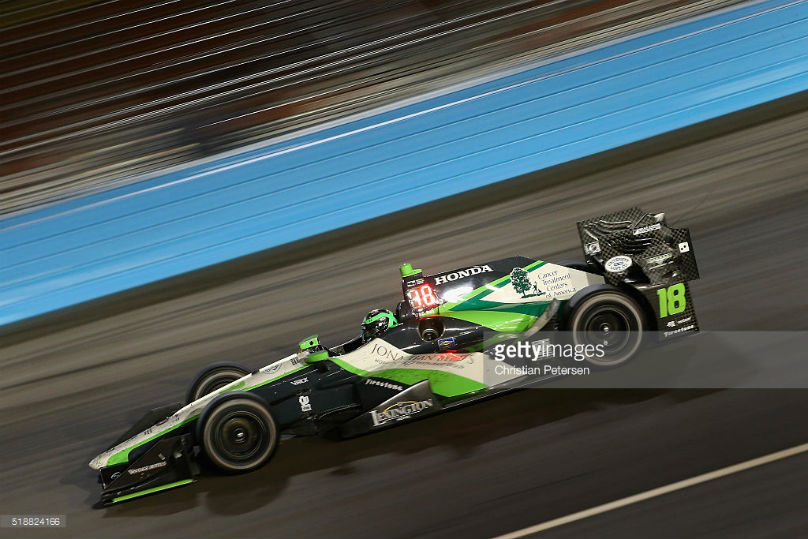 “As long as it’s (the engine) based on the rules and what they’re going to allow for balance of power, it could work. But it won’t happen now because of the engine manufacturers who are here. They want something consistent; they’re both playing on the same field and they have a lot invested.”

Having said that, engines have fans, too, and Coyne talked about parts of whole grandstands standing up and cheering when he raced past. “They weren’t cheering me, that’s for sure,” he joked.

Coyne has had some interesting partners over the years, including the late Chicago Bears running back Walter Payton. “He was racing a Trans-Am car and crashing a lot,” Coyne recalled, suggesting that Payton “drove a race car like he played football.”

“We had a sponsor back then, Mi-Jack, owned by a fellow named Mike Lanigan, and he put us together. ‘Sweetness’ was the right nickname, that’s for sure.”

Coyne said racing has been really good to him.

“I’ve always loved the sport, I’m dedicated to it and I want to do it better – despite always having to chase money to make it happen. But I have some other racing-oriented businesses – a race track in Joliet, Ill. (Route 66 drag strip; Chicagoland Speedway, since sold to the France family) and some restaurants in Florida.

The highlight of his career, of course, came in 2009 when Dale Coyne Racing, with the late Justin Wilson driving, won the IndyCar race at Watkins Glen before coming to Toronto.

“Our first win at Watkins Glen with Justin was pretty special. We bought a bunch of Cuban cigars, in Toronto – they’re legal here – and gave ‘em to everybody. We had a little banner made for them: Our First.

“A lot of people come up to me and say, ‘I still have that cigar.’”