The company will transition its auto sales to emissions-free by 2040, but there’s a lot more to it than just electric vehicles.

Join the Conversation (0)
Honda is the world’s largest manufacturer of internal combustion engines, and as of this writing, they still don’t officially sell any EVs here in Canada or the United States.

Over 20 years ago they released the Honda Insight, the company’s first hybrid. It was cutting-edge, ushering in the first of the hybrid electrics in North America. The quirky, fun-to-drive little hatchback was equipped with a manual transmission and was quintessentially Honda. It was also incredibly efficient but had a rather limited appeal. When Toyota brought the Prius here—a four door family-friendly sedan—it was an instant hit. And the Insight never really caught on.

Today, EVs capture nearly every headline and with looming regulatory pressures it’s turned into an “EV or nothing” play for many automakers.

Honda’s taking a measured approach to all this. For them, the future means going carbon neutral and they plan to do it as a company by 2050. Auto sales have an even loftier target of going emissions-free by 2040. But that doesn’t mean all its products are going to be battery electrics. They’ve also left room for hybrids, hydrogen fuel cells, and alternative liquid fuels. It’s an approach that will benefit many people and not just the select few that can afford a $70,000 electric SUV.

The company wouldn’t really be making founder Soichiro Honda proud by pandering only to the well-heeled; Soichiro’s vision was to make everyone happy. And that feeling was baked into products like the original Cub motorcycle. Think of that little bike, even the first Civic, and you have an idea of what runs deep in Honda’s DNA.

A full transition to EVs is inevitable and an affordable electric car is crucial to making this happen but the exact timeframe will change depending on what part of the world you’re in. In Japan, hybrids are still the cleanest to build. They require fewer resources to manufacture and have a lower overall carbon footprint than a full EV.

The battery packs in EVs take a considerable amount of resources and energy to manufacture, and the ones in SUVs have to be particularly large. But those are what everyone wants. So for its first run of electric cars here Honda is, of course, bringing in two SUVs, the Prologue and the Acura ZDX. They’ve also decided to partner with GM for the use of their Ultium battery platform.

To learn more about this partnership and their overall EV strategy, Wheels.ca attended a roundtable discussion at Honda headquarters in Tokyo to speak with the CEO of Honda, Toshihiro Mibe and Senior Managing Executive Shinji Aoyama, who is also head of global electrification. 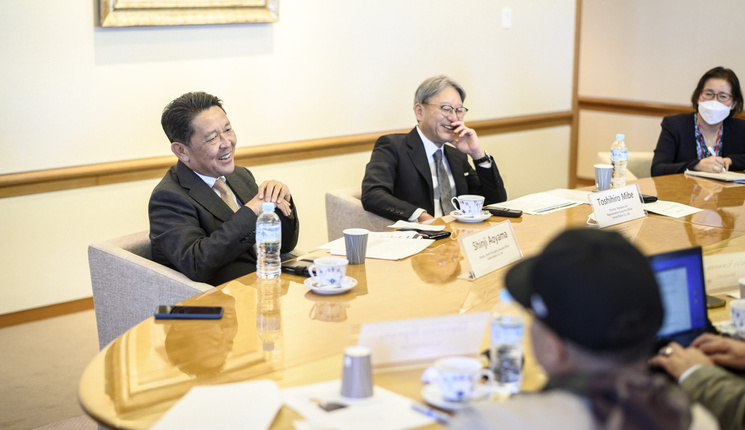 Aoyama tells us that GM was the only real choice for them. The size of GM and Honda is comparable and they’ve had a successful partnership before. He’s also a big fan of the “Ultium” brand of GM’s battery platform. “They are the best at promoting [a brand name like Ultium],” said Aoyama speaking through an interpreter. “I’m actually jealous!” CEO, Mibe tells us current battery technology is already established and there’s nothing proprietary brought to the table outside of GM’s considerable reach and marketing strategy. Companies like Panasonic and LG build most of the batteries in electric cars today, including the ones in GM’s Ultium battery pack. Utliumately (sorry) this partnership hinged on marketing and brand recognition rather than any trade secrets or technology sharing.

Solid state is the next step in battery evolution

Honda has invested 34 billion yen (about $315 million) into the production of solid-state batteries, and they’re almost ready. We visited a top-secret battery lab at Honda’s R&D facility in Tochigi. Here they showed us how each cell is assembled. The finished product looks quite similar to a standard lithium ion battery pack; however, inside it’s quite different. The anodes are lithium and copper, and the solid cathode starts as a slurry which is then dried and thinly rolled on to aluminum foil strips. Everything is layered together and each cell is sealed to protect it from moisture. The completed cell is physically smaller and lighter than its lithium-ion counterpart.

These cells are also more power dense, and since there’s no liquid electrolyte (hence the name “solid” state), the risk for short circuits and fire is essentially eliminated. The technology is very promising.

The process of making each cell in the lab was slow, but work has already begun on scaling up with a production line coming in 2024. Honda estimates its solid-state battery will be ready for market by 2028 or 2029.

But even with the latest in battery technology, more is needed to ensure a carbon zero future.

Honda demonstrated how it plans to achieve this. It’s a multi-pronged approach and it includes swappable mobile battery packs, called Honda Mobile Power Pack e:. These 10 kg smart batteries, which are about the size of a 2-litre bottle of pop, can store up to 1.3 kWh of energy. A couple of them together can provide power for small vehicles like scooters, bikes, and ultra-compact cars. They can also power tools like lawnmowers and snow blowers. Stack them in a sort of energy storage “cupboard” and they will provide household power during emergencies or blackouts. Bigger public versions of these can hold and charge up to 12 mobile power packs and will be situated along the road providing a swappable power source for small vehicles and thereby eliminating lengthy charging times. 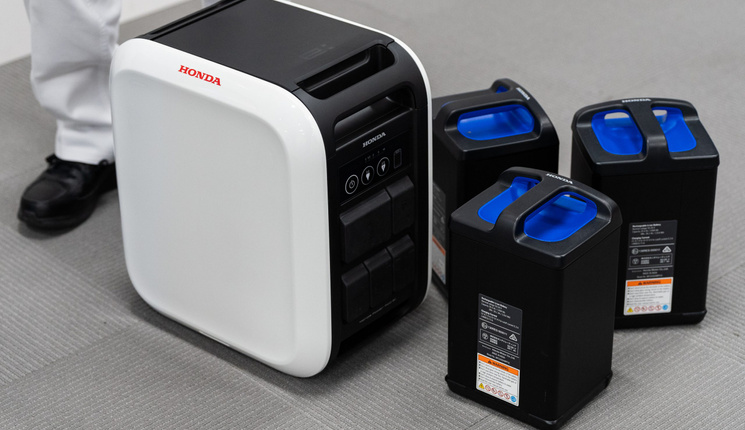 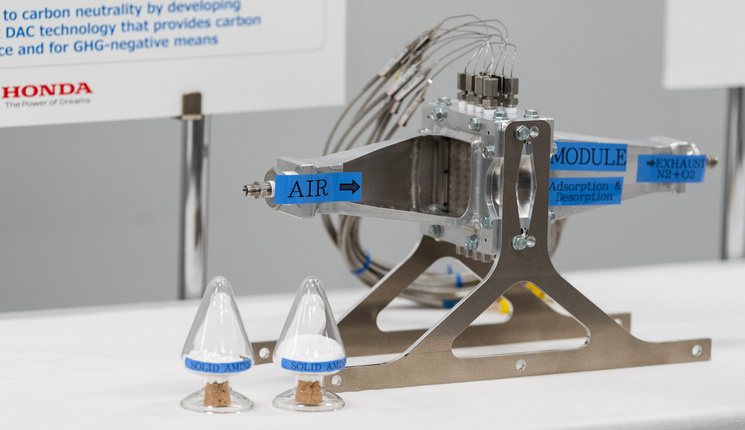 They also showed Power Pod e: which can be loaded with a mobile power pack and provide a portable power supply for things like camping or wherever a gas generator would typically be used.

Cleaning up the excess carbon dioxide in the atmosphere is another way to get to carbon neutrality. Chemical Absorption Direct Air Capture Technology or DAC is a low energy, low cost way to capture C02 directly from the air. The small football-sized prototype Honda showed us uses a fan to suck in air that is then filtered through a special absorption material, which separates the C02. The only emissions are nitrogen and oxygen. The captured C02 can either be stored or used to make fuel and other products. The small prototype is capable of capturing up to 10kg of C02 a year and while that doesn’t sound like a lot, they plan to scale it up a thousand times next year. 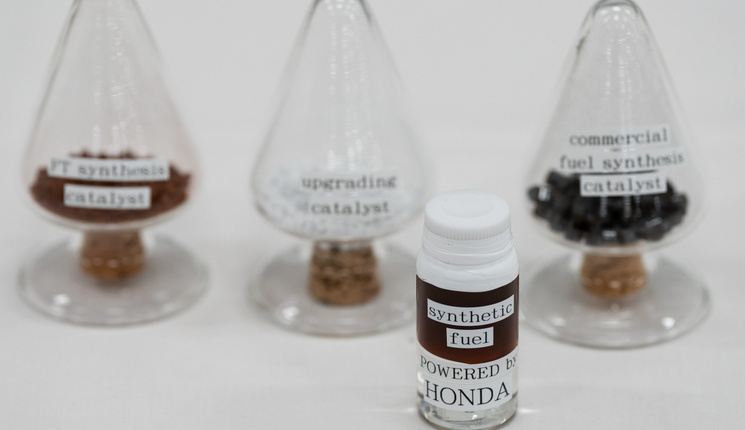 They’re also growing a type of algae called DREAMO that eats twice its weight in C02 and can then be converted into bio-ethanol by altering its chemistry. Brilliant stuff.

Where does all this leave those who want an EV but aren’t willing to spend upwards of $50,000 to get one? Aoyama and Mibe are both confident they can deliver an affordable electric car by 2027 but there are still things to be worked out. It’s unclear if this new affordable electric car would use the new solid-state batteries, but we were told that it would be a small crossover priced around US $30,000 in today’s money.

More promising for us was how the Honda fun-to-drive mentality still permeates through the company. Both the executives we sat down with are car people at heart. Aoyama owns a vintage Honda S800, which is a small 2-seat sports coupe, and Mibe used to drive a Honda Beat, both fun enthusiast-grade cars that aren’t sold here. During the presentation, two veiled cars with wide and low NSX-like proportions were teased, but with zero additional details, all we can do is speculate on what was under the covers. When asked if we would ever get an affordable electric sports car, Mibe and Aoyama smirked. No promises, they told us.