Hinchcliffe’s Surgeon is a True Angel in Disguise

It was May 18, 2015, at approximately 230 miles an hour, part of the car’s suspension broke and Hinchcliffe couldn’t steer it. The car hit the wall

The surgeon who saved Canadian racing driver James Hinchcliffe’s life at the Indianapolis Motor Speedway two years ago was walking through the Enercare Centre at Exhibition Place last Sunday, shortly before the start of this year’s Honda Indy Toronto, when he was ambushed by a guy with a tape recorder.

Is it true, I asked, that everything fell into place when the accident happened, that the rescue went as smoothly as oil through an engine, that it was almost choreographed, like a ballet, that it was almost as if everyone had rehearsed for just such an emergency?

“Uh, no, actually,” said Dr. Timothy Pohlman, senior staff trauma surgeon at Indiana University Health Methodist Hospital, who had been walking with the driver’s father, Jeremy Hinchcliffe of Oakville, when I stuck out my hand to introduce myself.

Tell me about it, I said. 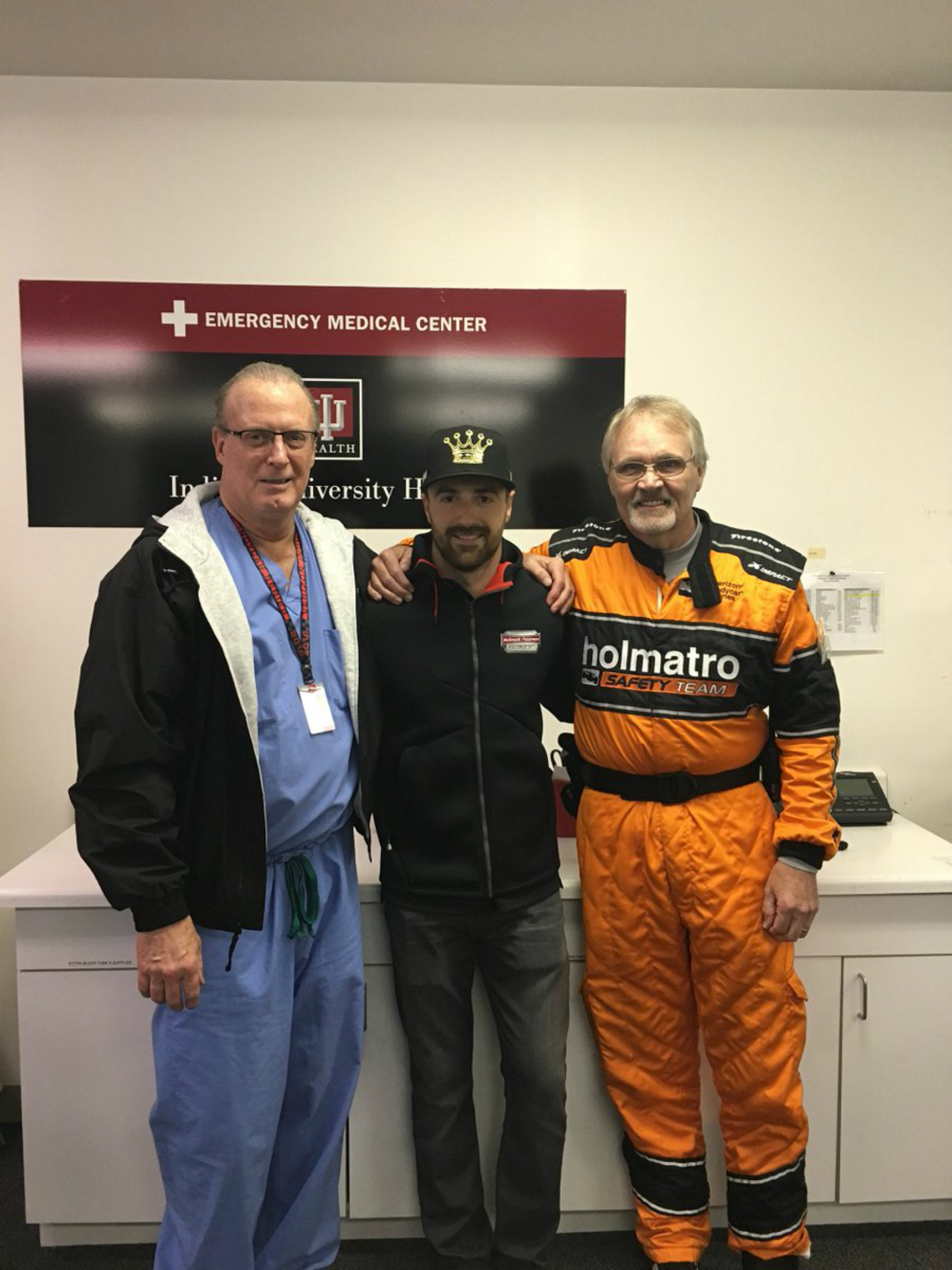 Now, to recap — in case anybody reading this is not familiar with the details of what has to be one of the most incredible comebacks in the history of sport, in which a race driver nearly loses his life while practising for the world’s most famous race, survives, and then goes on to win the pole position for that race a year later.

It was May 18, 2015, and Hinchcliffe was in his fifth season of racing in the Verizon IndyCar Series. He’d just signed a new contract to drive for Schmidt-Peterson Motorsports (half owned by Ric Peterson, a Calgary businessman) and had won a race in New Orleans a month earlier. Life was good.

He was practising for that year’s Indianapolis 500 and was heading toward the third turn of the 2.5-mile-long race track. At approximately 230 miles an hour, part of the car’s suspension broke and Hinchcliffe couldn’t steer it. The car hit the wall and a connecting rod pierced the tub of the car, went through the seat, passed through his upper right thigh and pelvis, continued through his left hip and jammed itself into the other side of the cockpit.

James Hinchcliffe, 28 years old at the time, immediately started to bleed to death.

After reviewing the circumstances that made him part of the story, and while standing in the middle of a concourse at the Enercare Centre, surrounded by racing fans either heading for their seats or walking through it to cool off in the air-conditioned air, Pohlman picked up the story:

“I’m assigned to the track by Methodist Hospital, and I’m on duty throughout the month of May. I’m usually at the infield medical centre. We have a fully stocked and staffed emergency department — we have everything we need to save lives in cases of emergency. We think we offer a unique capability.

“My job out there is hours and hours of boredom. The more bored I am, the better I feel. If I’m not needed, that’s a good thing. They’re (the drivers) so well protected now. We all saw Scott Dixon’s accident in the race this year (in which he crashed, big time). I thought for sure he’d be a patient. But he was fine.

“We see everything that happens on the track via closed-circuit TV. We saw the hit (Hinchcliffe’s crash); usually we ask them (the drivers) to flip up their visors to let us know if things are OK and he didn’t. He just bobbed his head.

“Mike Yates (IndyCar’s manager of track safety operations and the man in charge of the Holmatro Safety Team) got to James and couldn’t get him out of the car. He said he put his hand in the tub and it felt like there was a little pool of oil, and when he brought his hand out, he saw that it was blood. So, he knew he (Hinchcliffe) was bleeding badly already.

“They didn’t know why he was trapped; they didn’t know why they couldn’t get him out. They thought the tub had been compressed to the point where he was just stuck. They didn’t pull on him or yank him in any way — then. They got the tub apart (with Jaws of Life), and they saw that he had been impaled through his pelvis by a part of the suspension.”

It is now two years since this happened. There is not the sensitivity surrounding this story like there once was. Language used to describe methodology was once sympathetic, but All’s well that ends well, and Dr. Pohlman, a tall, strong man, doesn’t look like the kind to beat around the bush about anything.

“Generally, they’re (the safety team) taught to leave impaling things in but he was starting to be in bad shape and he was losing a lot of blood so they just pulled him off like a piece of shish kebab. And then they put him in the back of the ambulance.”

It was at this point that confusion and second-guessing kicked in.

“They radioed in — they said afterward that everything went very smoothly, but it didn’t; there was a lot of confusion and radio traffic — and Mike said, ‘We’re going straight to Methodist.’ Dr. (Michael) Olinger (IndyCar’s director of medical services) came by and said, ‘No, stop by the medical centre and pick up Dr. Pohlman, he’s coming with you,’ and they said, ‘No, we don’t need a surgeon; we’re going straight to Methodist,’ and Olinger said: ‘No, get the @&*%$ over here and pick up Pohlman.’

“We got to Methodist Hospital, which is not far from the speedway, thank goodness, and along the way, I’d been adding up the amount of blood he was losing — roughly — and by the time we got there, he was down way over 50 per cent.

“The first place we take him is what we call the shock room, where there’s an evaluation. I said if I can just transfuse him, he’ll be OK. So, I roll him over and there’s another pool of blood and that’s when I said we’re going right to the OR (operating room).

“From our shock room, where we first came in, to the operating room, is down a hallway and up an elevator. I kept a finger on his pulse as we were doing this, and just as we came off the elevator, I lost his pulse. He still had a rhythm on the monitor — his heart was still trying to pump blood but he had no blood left — and my experience was that whenever that happens, you’ve got about two minutes before the heart stops.

“So, we ran to an operating room — we always have an OR on standby, ready to go — we made a run for that room, put him on the operating table, splashed some anesthetic on his abdomen, opened him up, and I went down and tried to find the bleeder (which was his superior gluteal artery). I got my hand around it and controlled it — that was the artery that had been severed — and it was in his pelvis and then I just stopped and waited.

“I waited for the anesthesia to get caught up, and I started giving him blood and by about that time we’d given him 24 pints of blood. From the time he hit the emergency department to the shock room to the time I got my hand on the artery, he’d gotten about 24 pints. We calculated it out and he lost well over 60 per cent of what was supposed to be in him.

“You or I and most people could only lose 55 or 60 per cent before we’re dead. He lost well over that. Well past death. I get a lot of pats on the back for what happened that day, but I tell James that he saved himself because he was in such great physical condition, that he could sustain a blood loss that you or I could not have sustained.

“He gave me the two minutes I needed to get in there and stop the bleeding.”

Most times, the story ends there — but there’s more.

“The real story is his comeback,” Pohlman said. “He got back in the gym and his trainer would call me because the guy pushes himself to exhaustion. ‘We can’t stop him,’ the trainer would say. ‘If I say no, he’s just going to go somewhere else.’

“I stayed as his doctor. I didn’t leave him afterward. He had a bit of up and down. For the amount of injury he had, the seriousness of it, this was not unexpected. They said he was up walking in no time and discharged in a week, and that’s true, but I also had to readmit him to the hospital a couple of times, which not many people know.

“The nurses just adopted him and he’d go up on the floor, or I’d take him up there, and Shelley Lucas was his nurse, and he’d come by and she’d look at me and glare and say, ‘Just get out of the way, will you?’ Hinch and I became good friends after that.”

Pohlman didn’t start out to be a life-saving surgeon at a speedway in Indiana.

“I knew a little bit about racing — I grew up in Illinois. But (when I joined Methodist Hospital) my chairman called me in and said, ‘You’re going to the race track.’ That’s how I got into it.

“And I love racing today. It’s a fantastic sport.”

The Canadian Motorsport Hall of Fame will once again hold a Celebration of Speed day at Canadian Tire Motorsport Park. This year, the big day is planned for the Monday of the long August weekend, Aug. 7.

Enthusiasts and the general public, 10 years of age and older, can go for the “ride of their life” in some exciting cars with experienced and well-known professional racing drivers at the wheel.

In addition to a wide variety of Ride-Along cars, the Ron Fellows Experience will return again this year after last year’s sellout success. Thirty lucky riders will have the opportunity to purchase tickets for a thrilling three-lap session around the Grand Prix track in a Chevrolet Corvette Z06 driven by Canadian Motorsport Hall of Fame inductee Ron Fellows, one of Canada’s most successful race car drivers.

The event will also provide the opportunity for 50 participants to enjoy a full day of driving their own cars around the legendary “Mosport” track.

Founded in 1993, the CMHF works to preserve and promote Canada’s rich motorsport history and heritage. For details and ticket prices, please go to CelebrationOfSpeed.ca 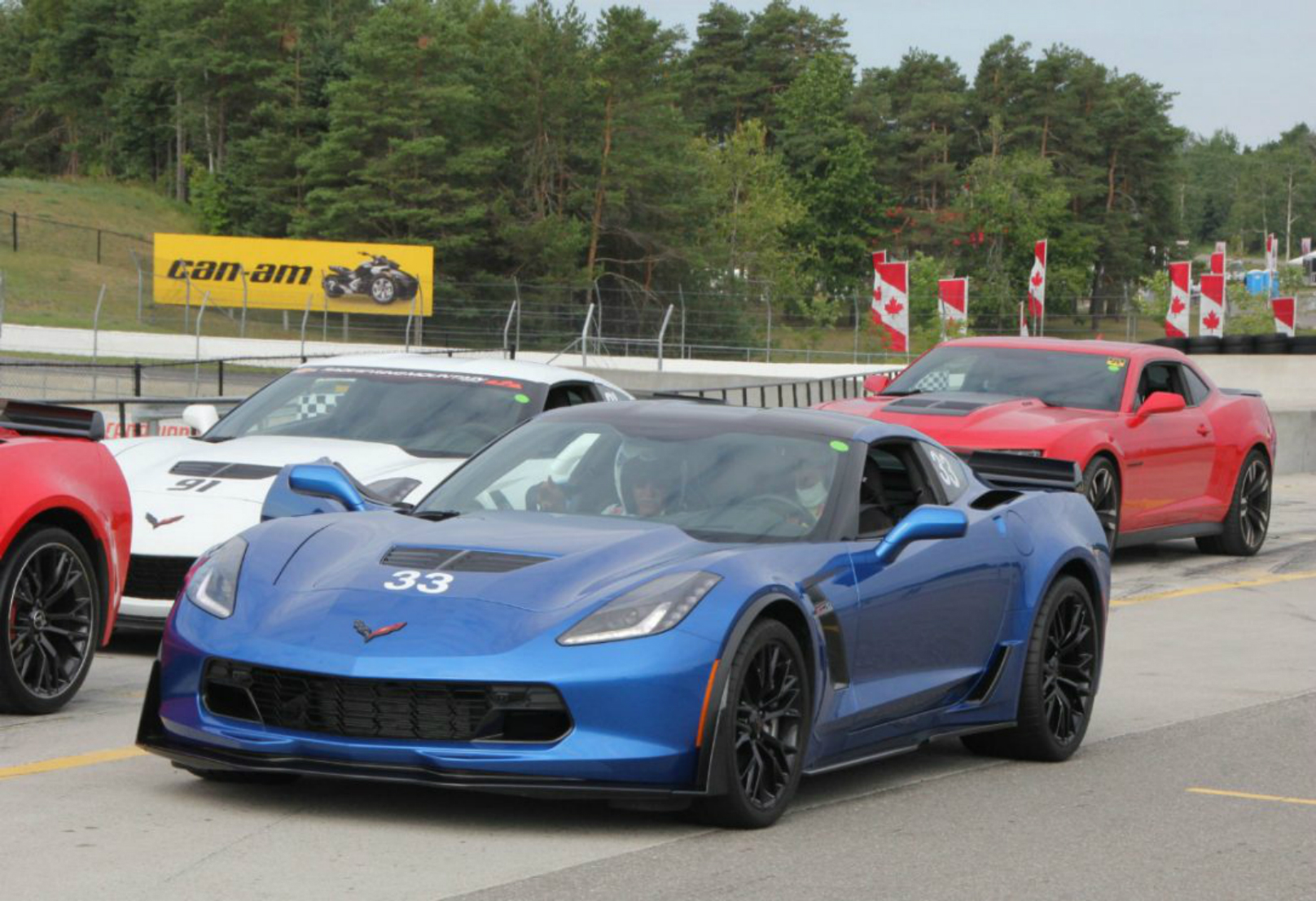 The hottest driver in Monster Energy NASCAR Cup racing as well as one of the most interesting drivers in any series are coming to southern Ontario’s Ohsweken Speedway next week for two nights of sprint car racing.

Kyle Larson, who currently sits third in the Monster Energy standings and Rico Abreu, a terror on the short tracks, will participate in the Northern Summer Nationals Monday, July 24, and the World of Outlaws’ Six Nations Showdown on Tuesday, July 25.

As well as Larson and Abreu, World of Outlaws Sprint Car Series regulars Donny Schatz (he won the Kings Royal race at Eldora Speedway last Saturday night and cashed a cheque for $50,000 for his troubles), Brad Sweet, David Gravel, Shane Stewart and all the rest will be racing Tuesday.

For directions to the speedway (I just take Hwy. 6 South to Caledonia, turn right and follow the traffic), ticket prices and other information, go to ohswekenspeedway.ca. 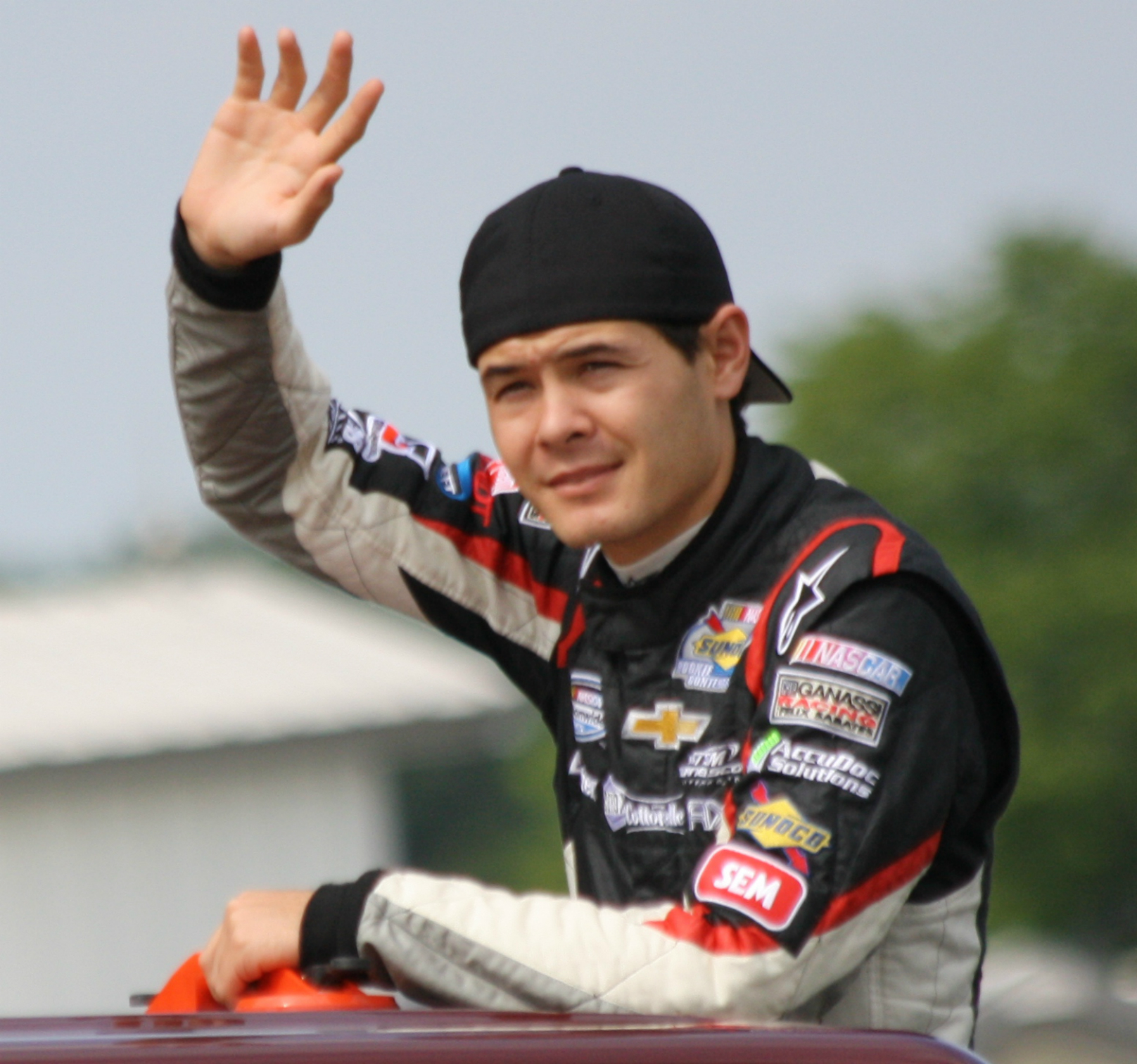