Hankook's $800-million Tire Facility is a Sight to Behold

Here’s how things often work in this era of free trade.

Shortly after the Canada-U. S. Free Trade Agreement came into effect in 1989, which eliminated tariffs, among other things, a manufacturing company in Kingston that churned out low-cost (as in cheap) picture frames that you could buy in places like K-Mart and Walmart suddenly closed up shop and just as suddenly reappeared in nearby Watertown, N.Y., throwing several hundred people out of work in Canada and creating an equal number south of the border.

The guy who owned the company, Howard Kelly (he had a personalized Ontario licence plate that said FRAMER), had inherited it from his father. I asked him why he did what he did and he said the Kingston factory was old and the cost of doing business (wages and taxes) was high.

He’d been approached by people from the city of Watertown and Jefferson County about relocating the business to an industrial park they were creating a little north of that city and just west of Interstate Hwy. 81. They would build a new factory for him and waive all business taxes for 10 years. He would save money on payroll (wages were lower in the Watertown area at that time, even taking into consideration the dollar differential) and he could ship his picture frames anywhere in Canada and the U.S., tariff-free.

Keep that story in mind. Where I am going here does not involve lost jobs — in fact, quite the opposite. But to get those jobs, everybody has to do more than play nice. This is the big leagues.

About a month ago, I flew to Nashville, Tenn., for the grand opening of a huge, new, $800-million Hankook Tire manufacturing facility in nearby Clarksville, about a half-hour outside Music City. About a thousand jobs have been created by what the company calls Phase One. When Phase Two is completed — sometime in 2021 — the workforce will number 1,800, made up of blue- as well as white-collar workers employed in everything from building tires to research and development. 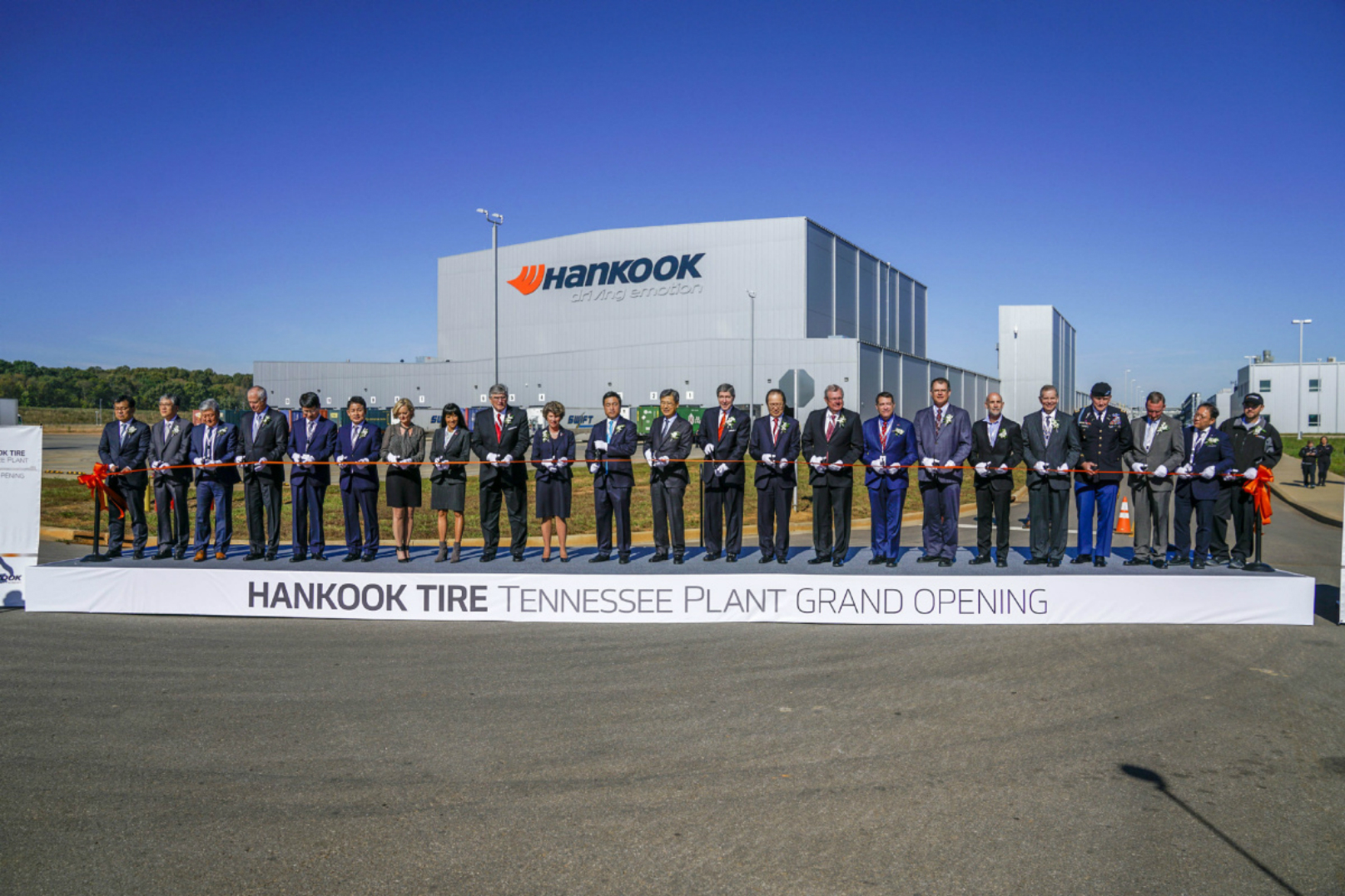 The plant is Hankook’s eighth global production plant but the first in the Americas. The company says the factory is expected to meet the demands of the North American market and streamline transportation times by eliminating much of the border wait times associated with the delivery by ship of tires from overseas.

The 1.5-million-square-foot factory (139,354 square metres), which sits on 469 acres (190 hectares) has already started to produce the Kinergy PT Premium Touring all-season tire designed for passenger cars and light trucks. Available in Canada early in 2018 — Hankook Tire Canada Corp., a technology focused, customer-oriented company, is headquartered in Brampton — the tire is said to be superior in winter conditions when its wider footprint will provide better cornering and handling.

The company is aiming to add Original Equipment (stock) products for North American car brands next year, with Hankook tires already selected to be on certain 2018 Honda and Toyota models when those cars go into showrooms.

When at full strength, Hankook will be the largest private employer in Montgomery County, where the plant is located. As well, Hankook recently moved its American headquarters from New Jersey to Nashville and about 100 jobs were created there.

Incentives? Much like the ones that attracted Howard Kelly to Watertown? You betcha — although everybody I talked to wouldn’t be specific, other than to acknowledge they were out there.

Tennessee Governor Bill Haslam, who’s spent a lot of time in Asia recently talking to other manufacturers about the benefits of setting up shop in his state, was quick to point out that while Tennessee leads the United States in foreign investment, there’s more to it than incentives. 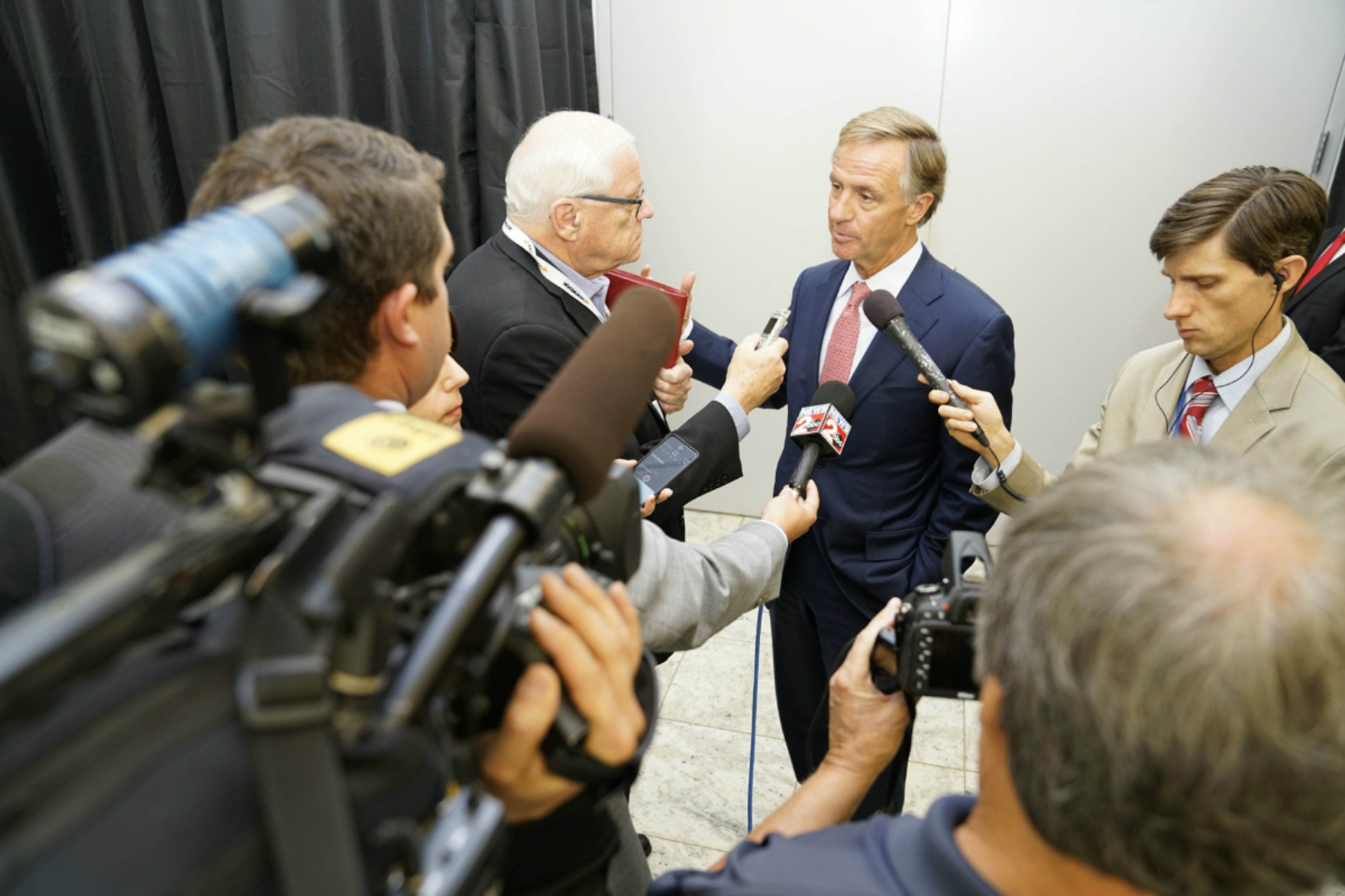 “It’s three or four things,” he told the Star in an interview that quickly became a scrum. “We work hard to put the right incentive package in place, but at the end of the day, I don’t think it’s so much about incentives, I think it’s more about the workforce. We have a program in Tennessee where every adult gets two years of community college or technical school, absolutely free of charge, and to be able to prove that we have that sort of workforce available has been a big draw.”

Haslam was among a number of politicians and dignitaries on hand (Congresswoman Marsha Blackburn and Clarksville Mayor Kim McMillan) as well as company executives, media, tire dealers, U.S. military veterans and employees — several hundred in all — who attended the official opening and ribbon-cutting.

The difference between announcements like these in Canada and the United States — and this is a generalization, granted — is that one often borders on pessimism while the other serves up unbridled optimism. You got the feeling several weeks ago at that announcement in Tennessee that the sky’s the limit. There really was electricity in the air.

I asked Haslam if the current administration in Washington’s “Buy America” policy was influencing investment, and he said, after pointing out that the decision by Hankook was made several years ago, that the Trump doctrine certainly wasn’t hurting.

“I think the ‘Buy America’ policy has gotten people’s attention,” he said. “There’s no question that some companies are talking to us now that might not have been before. We’re seeing a lot of direct foreign investment for the first time from a lot of firms; the investment we’re seeing in Tennessee is from a lot of companies that have never had a presence in the U.S. previously.

“We’re strong in anything automotive-related, and I think these companies are seeing Tennessee as being centrally located to ship manufactured goods anywhere in the U.S., and to Canada and Mexico. Plus, we do have incentives in place, the right workforce, and it’s these attractions that are bringing jobs here.

“We live in a challenging, international economy. You can like it or not, but that’s the reality.”

The veteran military presence was not by accident. Seung Hwa Suh, the company’s Global CEO, went out of his way during his opening remarks to thank the U.S. for its involvement in the Korean War of the 1950s. 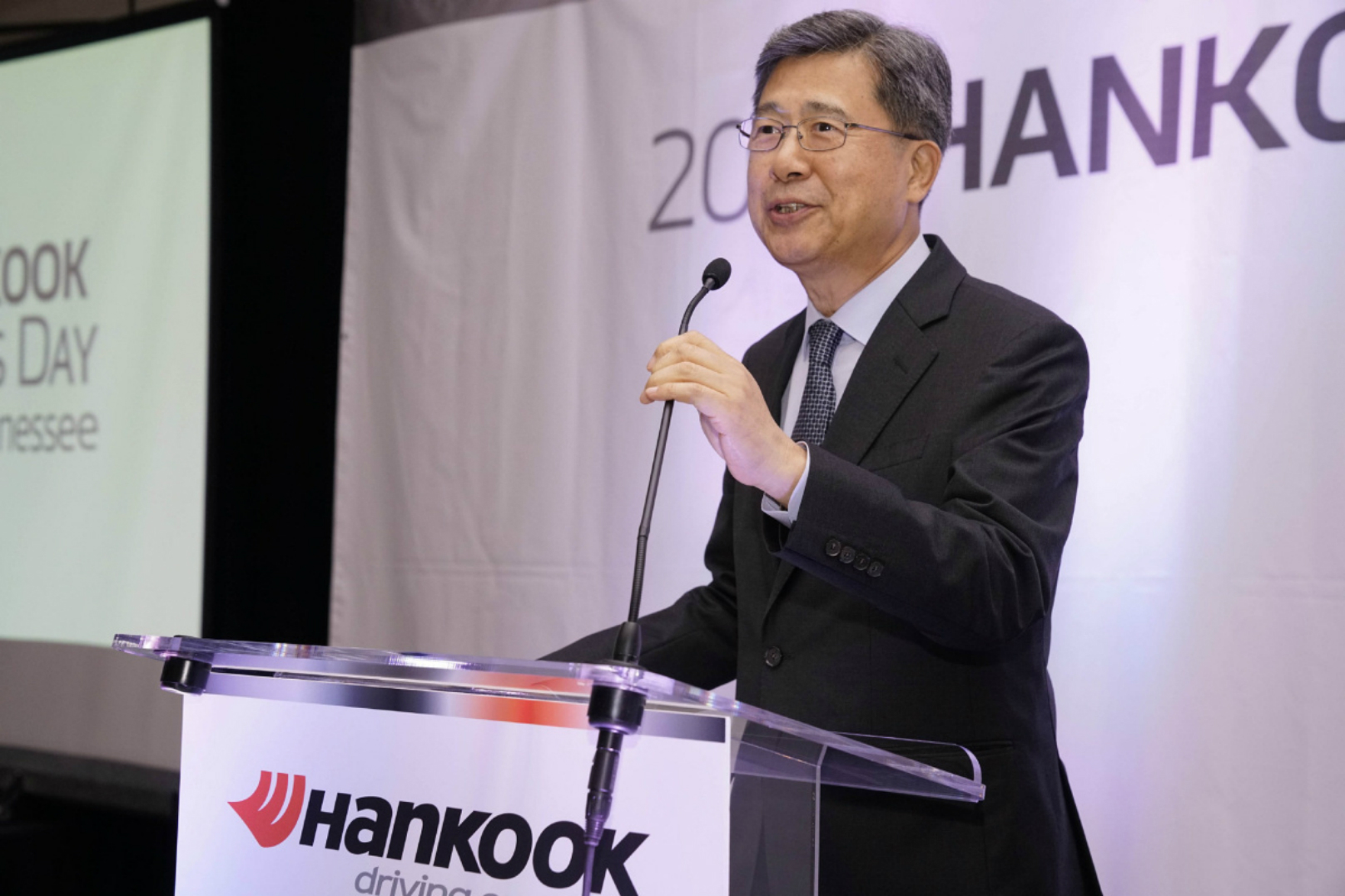 “If it was not for you, I wouldn’t be here today — and I mean that,” he said, before adding that the “new Tennessee Plant signifies Hankook Tire’s growing business in the United States and continued journey toward being a global leader in the tire industry (it’s the seventh-largest tire company now). Our investment is part of our ongoing commitment to innovation, state-of-the-art technology, and customer service.”

Hankook Tire America Corp. President Hosung Suh, said the main reason to build a factory in the U.S. was to cut down on delivery time to dealers.

“Say that demand for a certain tire increased,” he said, “but if it takes three months to get, which was the case before this plant was built, the demand could be gone. With this plant, that demand can be supplied within weeks, two weeks or one week.”

He said the tire market is flat in North America (yes, he really said that), and that makes it imperative to deliver tires to dealers quickly. “Competition is fierce,” he said, adding that the only way to break out is through pricing, product, delivery, and better service. “If I can reduce the inventory period, it will be beneficial. If I can provide the right tire to customers, then that’s the way to compete.”

And then he said something that could — emphasis on “could” — be viewed as controversial.

“Our primary target is the U.S.,” he said. “We should grow here. Besides the U.S., we will ship tires to Canada. If new things happen with NAFTA (a reference to the current negotiations), I don’t want to say we don’t care, but it won’t have a big effect.”

We were taken on a tour of the factory, which I found to be a bit disappointing. No recording equipment and no cameras allowed. I suggest that every tire company in the world makes tires pretty much the same way, and so I don’t understand the big deal, but it’s their factory and their rules so you had to live by them.

Also Read: How to decode the information on a Tire Sidewall

The big challenge was staying out of the way of the dozens of autonomous carts moving around the place, delivering materials to work stations. The production process is mostly automated — it takes between three and four hours to make a tire from scratch — and I found the time to cure the rubber most interesting: between 12 and 17 minutes. I would have thought it would have taken longer. Every production station in the process is staffed and they can make adjustments without interrupting the workflow.

I was fascinated by one step in the process that wasn’t automated and that was a fellow who applied a sticker to finished tires as they came off the line. He — and others doing the same thing — represented the final step in Hankook’s quality control process, in which every tire is checked.

After the stickers are affixed (information such as the DOT and destination are on the stickers), the tires are then loaded onto trailers, another automated process. A tractor truck then hooks up the trailer and heads off down the road to make deliveries.

Hankook doesn’t restrict itself to producing tires for passenger cars and trucks. It’s very involved in motorsports, providing tires for the German Touring Car Series (DTM), the FIA Formula 3 European Championship (a Canadian, Devlin DeFrancesco of Toronto, is turning heads in that series), British F4 and the Pikes Peak Hill Climb, among other events and championships.

Yes, Clarksville is where the Monkees took the last train to — the band filmed much of the music video for that song in the city’s downtown — and is a lovely place considering it was hammered by a tornado in 1990 and serious flooding in 2010.

It was on Oct. 14, 2013, that Hankook announced it would build this factory in Tennessee. Four years later, almost to the day, with the city and the state working hand-in-hand, the land had been assembled, the factory and other outbuildings constructed, 1,000 people hired and tires built.

Pretty impressive to see, particularly when you come from a part of the world where they can talk about all sorts of things for four years but, often, not a lot happens. 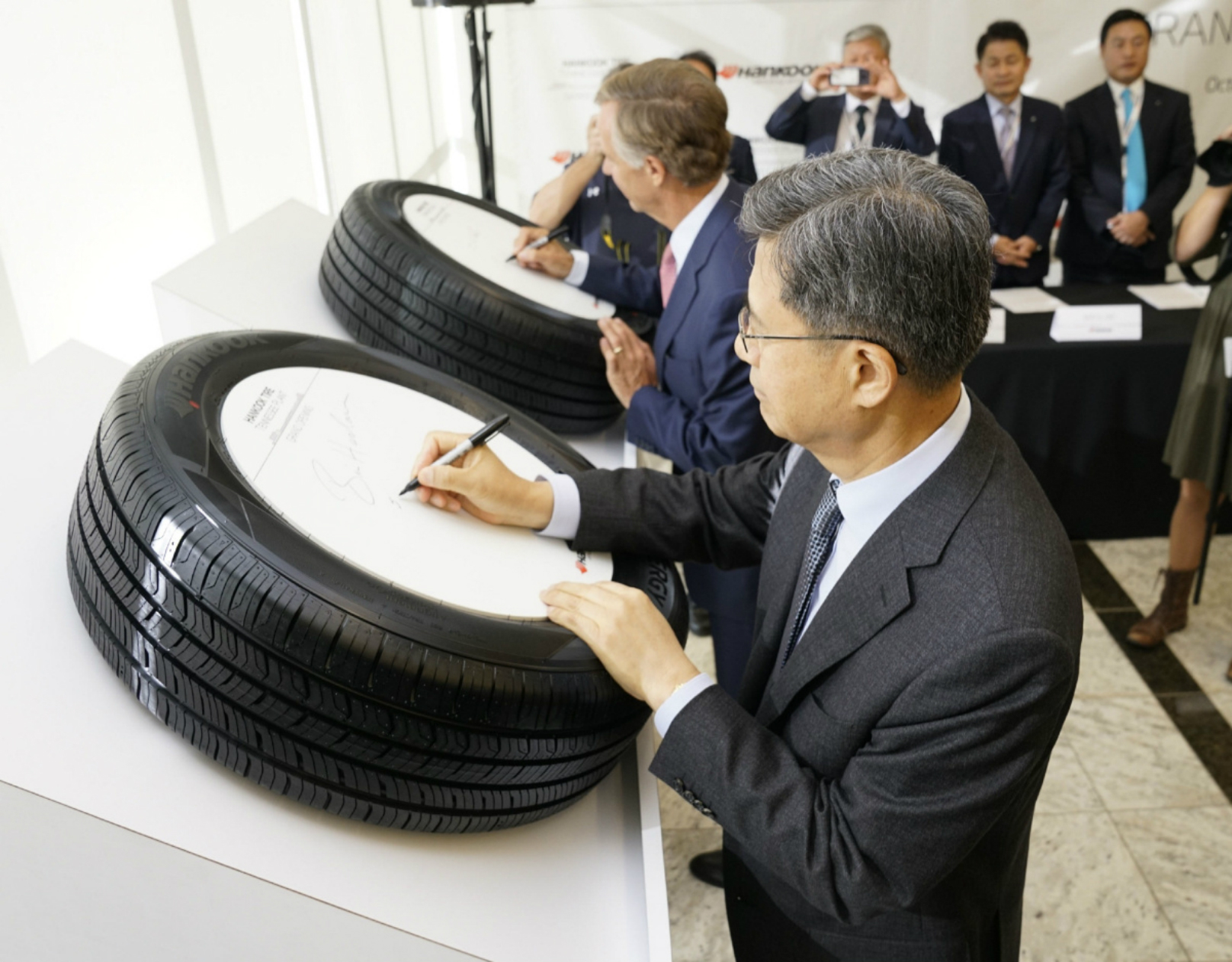