Here is the difference between what a racing driver says to reporters and what the team’s PR people would prefer people to read:

Lewis Hamilton, at the end of Sunday’s Grand Prix of Monaco, in which he finished third, said this to journalist Chris Medland, as published on Racer.com:
“I always want to lead the Monaco Grand Prix but Daniel did a great job today. Red Bull deserved it this weekend. Their car really worked well here. I think we did the best job we can. We were the third-fastest team here and we finished third.

“Super unexciting race, I think, for everyone . . . Wow. It was intensely boring!”

Asked if it was boring inside the cockpit, Hamilton replied: “Oh my God, yes!”

Pretty revealing, eh? Tell ya what, Lewis: let’s trade. I’d love a chance to be bored out of my skull while driving a Mercedes F1 car through the streets of Monte Carlo. Let me know when you’re ready. My email is at the bottom of this column so let me know. I’m ready anytime you are.

Okay, so here is what the team PR people, who send me their race reports after every Grand Prix, would prefer that he’d said:
“A big congratulations to Daniel, I’m really happy for him. He was so close to winning his first Monaco Grand Prix two years ago, so it’s good for him to have it now. I’m happy with the weekend – we were the third quickest team and we almost got second. I’m grateful to only have lost three points to Sebastian in the championship fight – I’ll take that and move forward.
“It’s a shame that the race is unfortunately not as exciting as the whole spectacle of Monaco, especially since through practice there’s no place like it and the track is just epic in Qualifying. We hope that Canada will suit our car a little bit better; but it will be another close fight, especially with the Ferrari.”
See? Thank goodness for good automotive journalists who know how to ask the right questions. 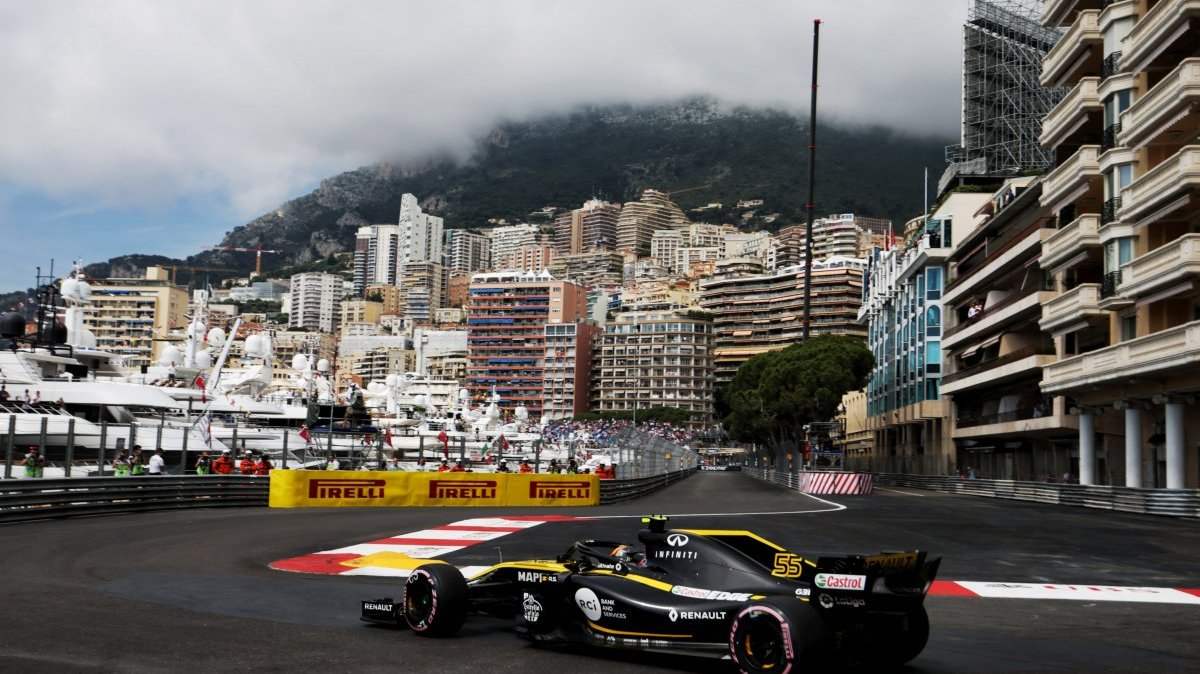 I thought Martin Brundle had gotten the message that he shouldn’t try to wing his grid walks before a Grand Prix. Last time out was a disaster (“Carlos! Carlos!) and this week wasn’t much better.
It still needs work. Lots of work.

We know that the Great God TV runs everything, don’t we? So Sunday, at the Indianapolis Motor Speedway, with 300,000 people in the place, they had to hold up the presenting of the colours because ABC was in commercial. The announcer even said, “We’re waiting on ABC.”
They won’t have ABC to kick around anymore, though. Next year, NBC Sports takes over.

Now, Danica Patrick drove her last race ever at Indianapolis Sunday – she crashed out and officially finished 30th out of 33 drivers – and was not happy at having to face the media afterward.
I don’t blame her. It’s not often that I criticize people I work with but, frankly, I was appalled every time I was in a speedway media centre when she was in a race.
Most of them men, these reporters just couldn’t handle the fact that a woman could be a good racing driver.

And yes, she was a good racing driver. No, she couldn’t beat Kyle Busch, but who can? She won an IndyCar race and none of the other women who’ve raced in that series have ever done that. She won poles; she consistently finished in the top ten in points and was fifth one year. She was third in the Indy 500.

Yes, her NASCAR career didn’t work out as well as some would have liked but there are reasons. While NASCAR wanted her to win, the teams she drove for didn’t. Simple as that. I hope at some point, some years from now when the dust settles, she writes her book or makes her documentary about how she was treated compared to the men who were on the same team.
I saw what was happening, week in and week out, because I got the post-race reports from all the team’s PR people and nobody will ever be able to convince me that there weren’t shenanigans when it came to her car.

But that’s for her to say – and I hope she does, at some point.

Racing will miss her.

And so will all the writers who never took her seriously. They won’t have her to kick around any more. And with her gone, I wonder who they’ll pick on next – if they have the guts to, of course. 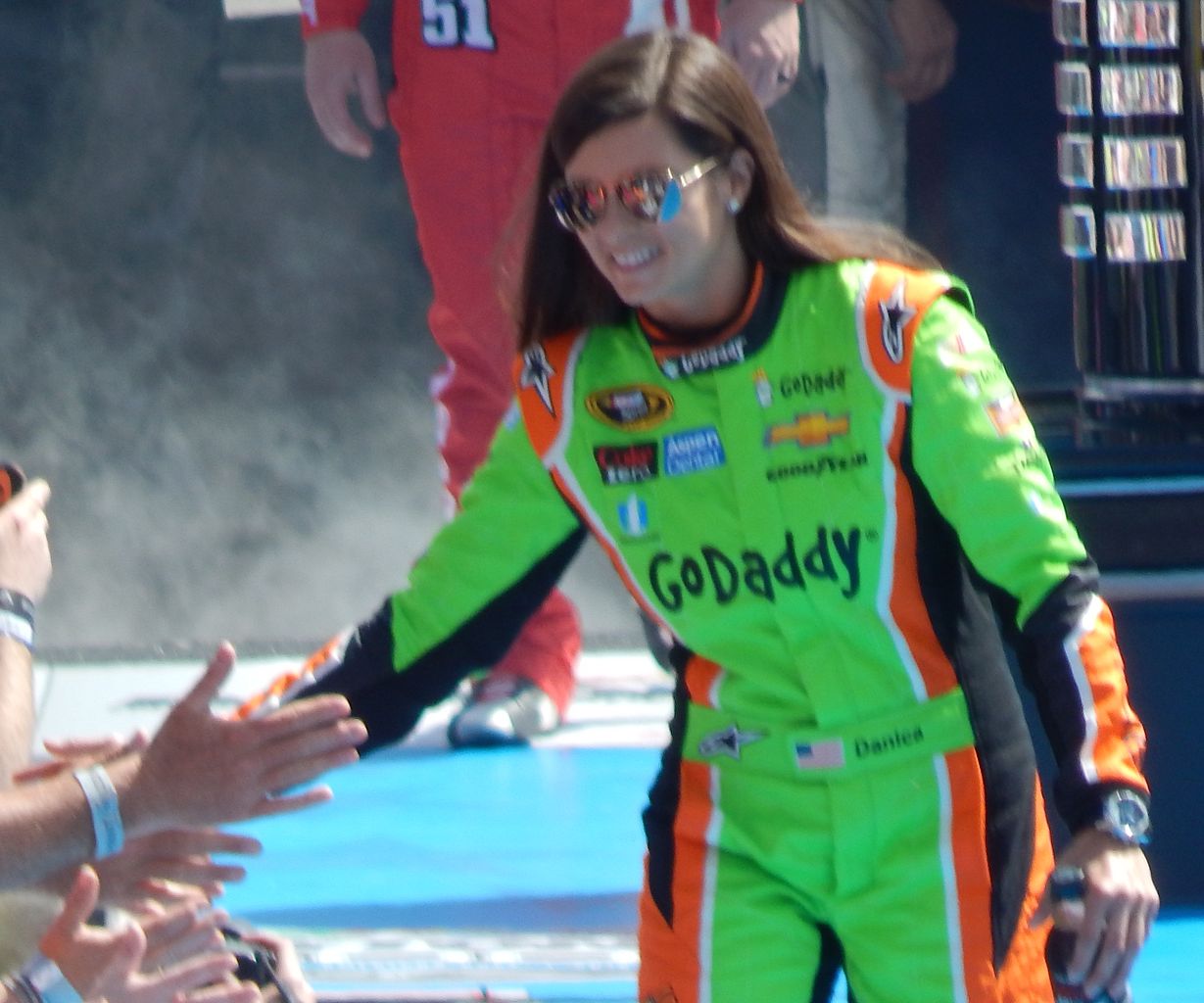 When the 500 started Sunday, most seats in the huge Indianapolis Speedway were occupied. By the time the race was 50 laps old, many of those same seats were empty.
The reason? It was 91 degrees Fahrenheit. People were either looking for some shade (more than 200 were treated at the Speedway’s medical centre), or they got into their cars and turned on the air conditioning and went home to wait till Sunday night when the local ABC station would show a recording of the race.

The last time it was this hot on race day was in 1953 when – are you ready for this? – nine of the 33 starting drivers were treated for heat exhaustion. One driver, a sprint-car and midget-car national champion, Carl Scarborough, died.

I know today’s modern drivers have drinks bottles they can drink from to stay cool and some wear cooling suits and helmets but it still never ceases to amaze me how well they handle the heat. Undoubtedly it has something to do with their level of physical fitness but there’s a mental toughness there that those of us who are mere mortals don’t possess.

Here’s how to complete understand what those people go through. Put on your long winter underwear and your winter coat, hat and gloves. Get into your car on a day when it’s 25C and turn the heater on full blast. That should give you an idea of what it’s like to be driving a racing car in temperatures like Sunday’s and you’re wearing your three-piece fire-retardent driving suit, underwear, balaclava, socks and gloves.

Okay, the big story for Canadian race fans was the performance of Robert (Robbie) Wickens, of Guelph. Although Australia’s Will Power won the 500, the march to the top of the IndyCar mountain continued for Wickens.

Wickens will most likely be named Rookie-of-the-Year at Indianapolis when they make that announcement on Monday. He continues to impress as he drives his way through his rookie IndyCar season.

The Canadian, who’s turned heads for years while racing in Europe in series as diverse as Formula Renault 3.5 single-seat racing cars and the German Touring Car Series (DTM) for sedans, finished ninth in the 500-mile classic Sunday, the best finish for a first-year driver and the top finish in the race for a Canadian.

The other Canadian, Zachary Claman De Melo, of Montreal, wound up 19th although he hovered around the front of the pack for a good part of the race and even led some of the laps. He ran out of fuel with three laps to go or could perhaps have finished higher.

Wickens, who is employed by the Schmidt Peterson Motorsports organization, as is Oakville’s James Hinchcliffe, who failed to qualify for the 500, really turned on the jets during the last 10 laps Sunday and passed 10 cars in the process.

“It was one hell of a race,” he said afterward. “It was an emotional roller-coaster. Early on, I thought we were looking pretty good. But then, on one of the yellows, we went into the pits assuming everybody else would and it turned out that we were one of the few teams to do that. It kind of put us on an alternative strategy and we lost a lot of track position. Today, track position seemed to be everything.”

Although he suffered that yellow-flag misfortune, the end-of-race success already had him thinking of next year’s 500.

“I want to start the next one at the front and finish at the front,” he said. “I’m glad I got into the top ten and that we finished it (the race). I foresaw running in the top ten all day. It was kind of what I had in mind. I thought we were going to keep chipping away and making forward progress but we were making that progress and then we went off strategy and it put us in the back and we struggled all day to get back up there.

“Those last 10 laps, we had nothing to lose. We pitted for fresh tires and went from 19th to ninth and that was the best strategy of the day.

“We had a great car,” he continued. “As soon as we had clean air, we were quick. In fact, we were one of the quicker cars on the track; I could run 221s by myself. It seemed every time I had clean air I was running down cars. It was a long day but luckily the last 10 laps were good fun.”

“We have a lot of momentum,” he said, “and we’re going well. I think today showed how strong we are as a team; we hung in there and we ended up with a top ten out of it.”
Ed Carpenter, the pole winner who went on to lead 65 laps, finished second in the race behind Power with Scott Dixon finishing third. Alexander Rossi, who won the 100th anniversary Indy 500 two years ago and who pulled off some amazing passes during Sunday’s race – really doing what no racing driver has done in recent memory, in some cases – was fourth and Ryan Hunter-Reay arrived home in fifth.

Nine cars were eliminated by crashes. Ride-buyer James Davison suffered handling problems early in the race and was clearly having difficulty. At some point, he drifted up into the groove while running about 40 miles an hour slower than everybody else and was run into by defending race champion, Takuma Sato, eliminating both cars.

Ed Jones, Danica Patrick, Kyle Kaiser, Sebastien Bourdais, Helio Castroneves, Sage Karam and Tony Kanaan all lost control of their cars and spun out on their lonesome.
Kanaan, who is very popular in Indianapolis, mainly because he frequently appears in commercials on local television and makes himself available to the electronic media at the drop of a hat, was clearly disappointed about crashing out.

After Carpenter’s 65 laps in the lead, Will Power led 59, Kanaan was on top for 19, Oriol Servia led 16, Graham Rahal was in charge for 12 and Claman De Mel was ahead for seven. Wickens led two.

Power swept the two races at Indianapolis this May – the 500 and the Grand Prix two weeks ago – the first time that has happened. It was the 17th Indy 500 victory for Team Penske – Power’s employer – and the 201st win for that marvelous racing outfit.

Two things came out of the post-race press conferences: Team Penske announced that Castroneves will be back with the team for another crack at the 500 next year – he’ll continue to race for Penske in the IMSA WeatherTech SportsCar Championship – and Penske himself said that how his team had won 17 500s, he’ll be shooting for his 18th next May.
So everybody’s been warned. 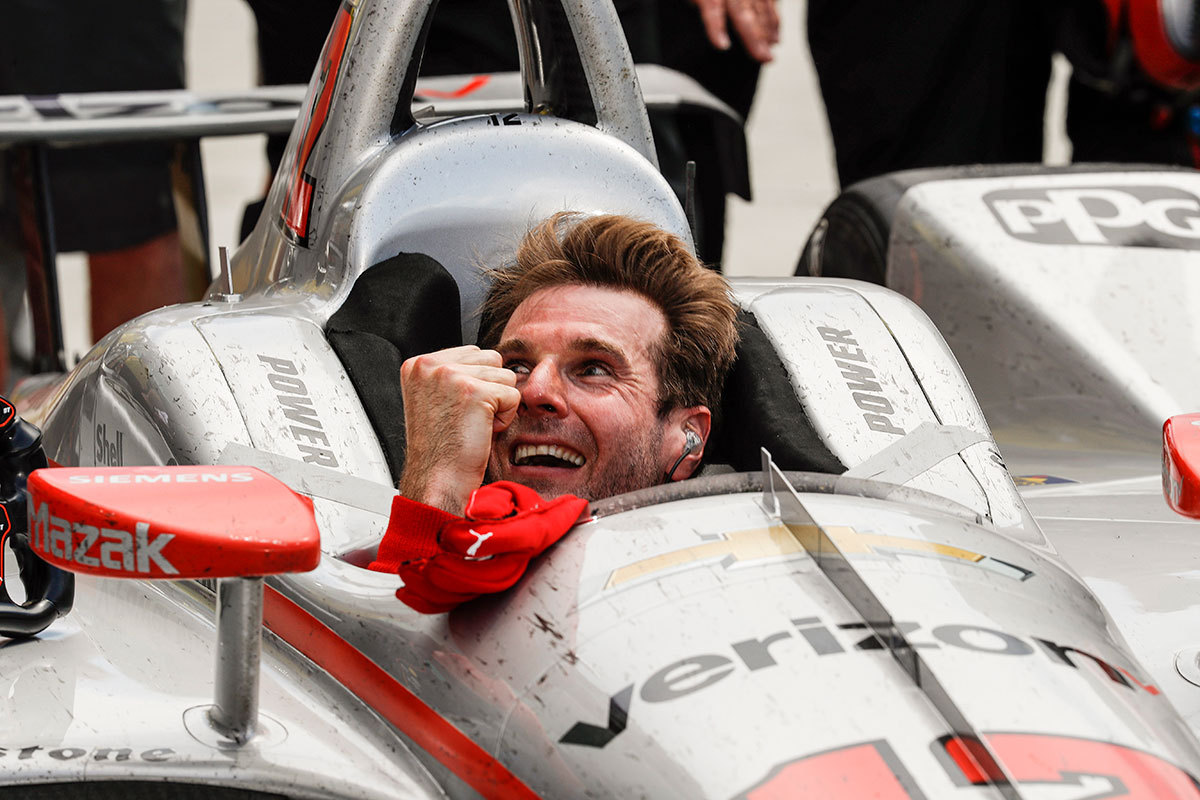