Grille of Your Dreams: Chevy Updates the Colorado

The 2021 Chevrolet Colorado will make its first public appearance at this year’s Laughlin Desert Classic later this week.

With a full replacement still some years away, Chevrolet is taking the time to refresh the appearance of its Colorado mid-size pickup. Landing on the market five years ago as a 2015 model, one might begin to level criticism at this truck’s age until they remember it shares a segment with the older-than-the-dirt-it’s-driving-on Nissan Frontier.

In an effort to better differentiate the Colorado’s various and sundry trims, Chevy is making changes to the truck’s front fascia and tailgate. Base WT, mid-level LT, and zooty Z71 trims will all receive updated grille bars, lower fascias, and front skid plates for 2021. The Z71 receives a black bowtie logo while the WT and LT hang on to the traditional gold coloured badge.

The truck shown in these images is the mighty ZR2 trim which, for 2021, earns the CHEVROLET billboard grille from the übermensch Bison special edition that appeared last year. GM says the ZR2 will be the only Colorado model to feature such front fascia, suggesting the Bison may be a one-year only offering. ZR2’s new front end provides off-road gearheads with improved visibility and appropriately aggro looks. 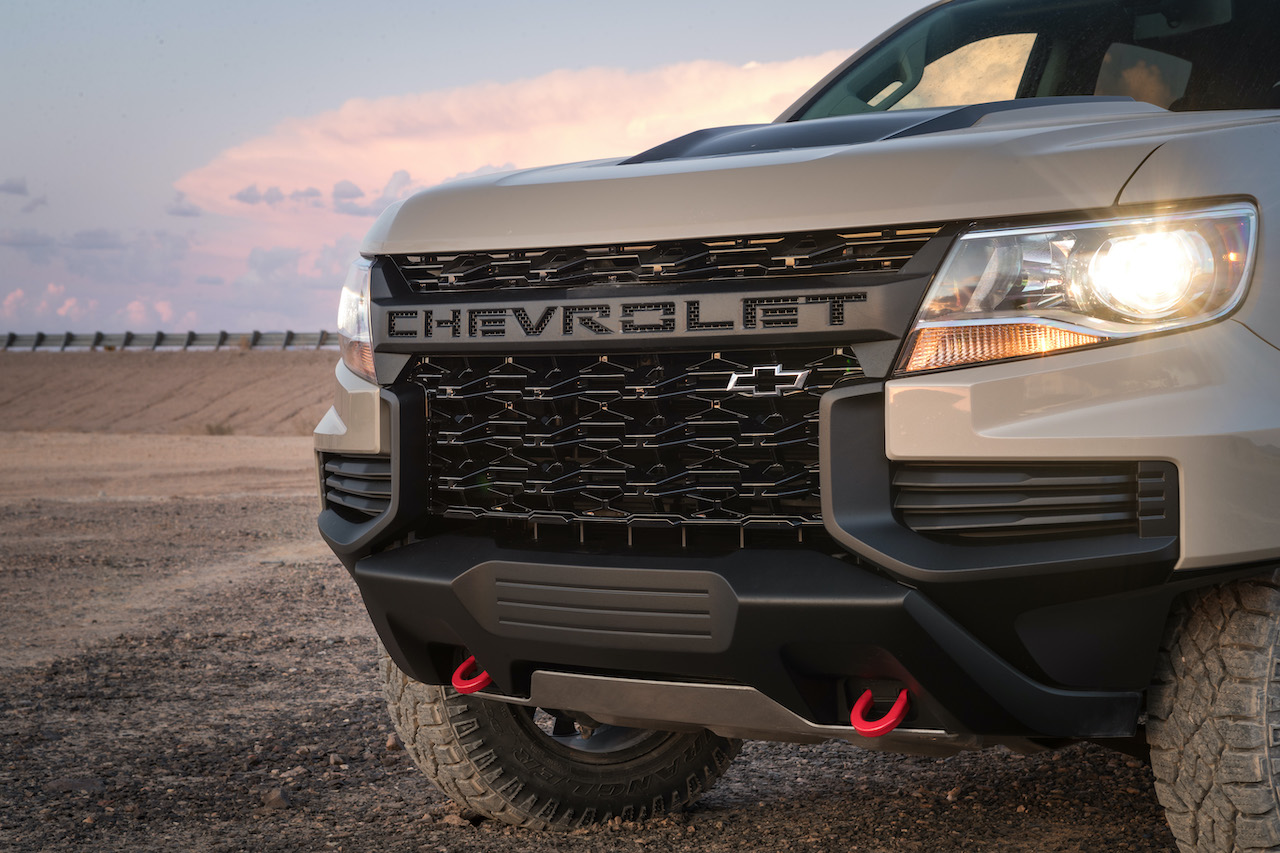 For those who have forgotten, the ZR2 deploys a set of segment-exclusive DSSV position-sensitive dampers, units developed in conjunction with Canadian company Multimatic. Standard front and rear electronic locking diffs keep the party moving off-road, along with a 2-inch suspension lift and track measurements 3.5 inches wider than a stock Colorado. Rock sliders along its flanks, cast iron control arms, and multiple skid plates are all standard on the ZR2, with red tow hooks showing up for the 2021 model year.

Around back, the Colorado lineup will now feature greater differentiation from trim to trim and the addition of the new “Sand Dune Metallic” exterior paint colour option. Available on the Z71 and ZR2 models, it looks for all the world like a prosthetic limb. Buying advice: pop for either of the natty red or blue shades. All Colorado trucks will also include tailgates with embossed “Chevrolet” insignia hammered into the metal in place of the traditional Chevrolet bowtie.

The 2021 Chevrolet Colorado will make its first public appearance at this year’s Laughlin Desert Classic later this week. Expect to see a race-prepped rig driven by Hall Racing. The production-spec 2021 Colorado ZR2 will then debut at the Vegas SEMA show in early November. 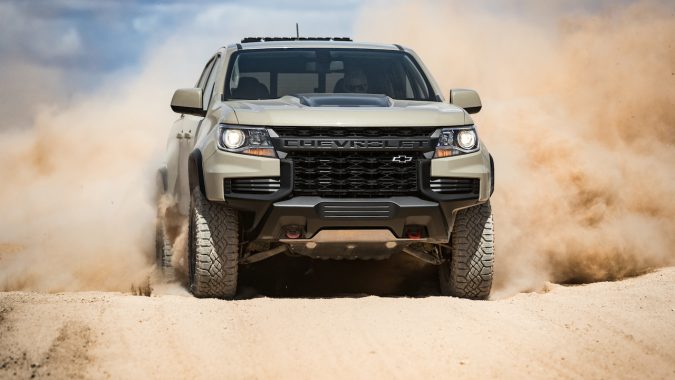 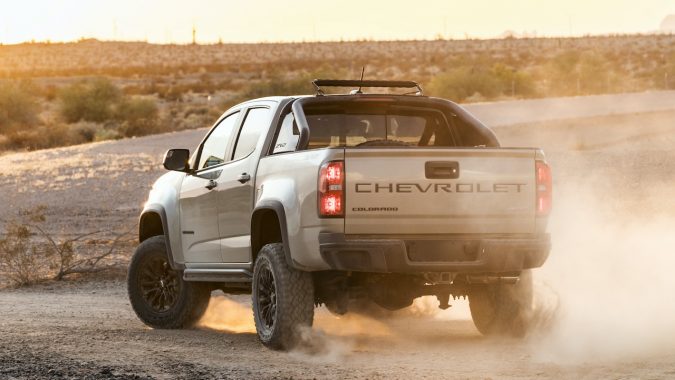 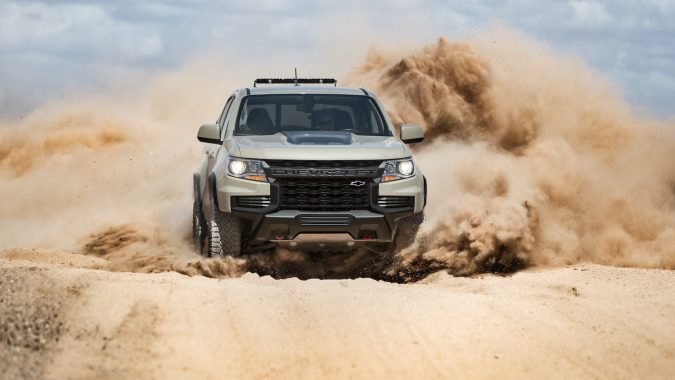 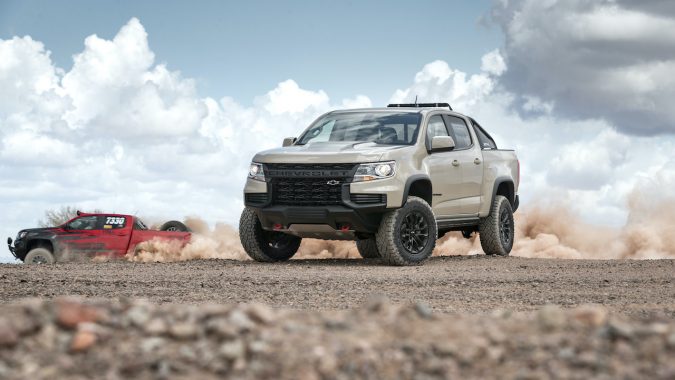 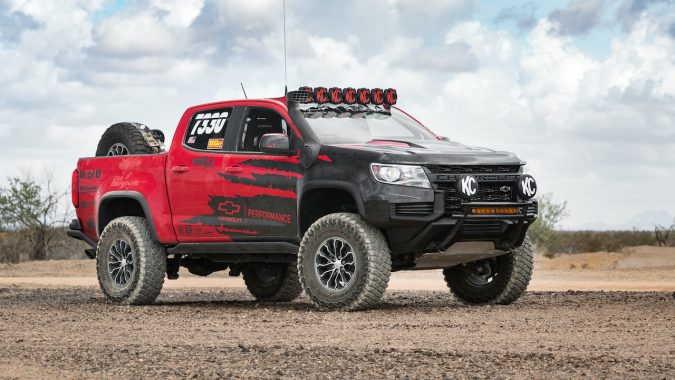 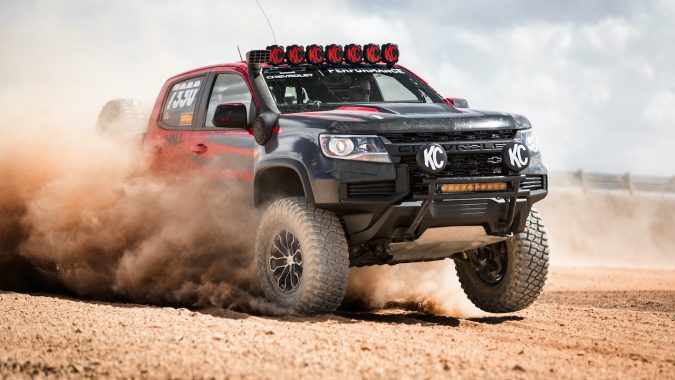