Article was updated 8 years ago

Join the Conversation (0)
WATERLOO—“A lot of people don’t know what they’re going to do,” Jeff Sixt observes, as he makes final adjustments to a race car powered by a 12-volt battery and sporting a grey-painted plywood body. “This helps you make up your mind.”

“This” was the annual Waterloo High School Electric Vehicle Challenge for battery-powered cars designed and built by students in Grades 9 to 12.

And Sixt’s experience, launched 2-1/2 years ago when he joined the electric car club at Waterloo’s Sir John A. Macdonald Secondary School, played a part in convincing him to enrol next fall in mechanical engineering at the host University of Waterloo.

The event began 12 years ago at the Sauble Speedway on the Bruce Peninsula. It moved to Orangeville in 2006, then, to Waterloo three years ago.

Six schools from across the province, bringing two cars each, participated in this year’s event, run May 31 on a tight course marked by traffic cones and hay bales through parking lots around the university’s engineering buildings. 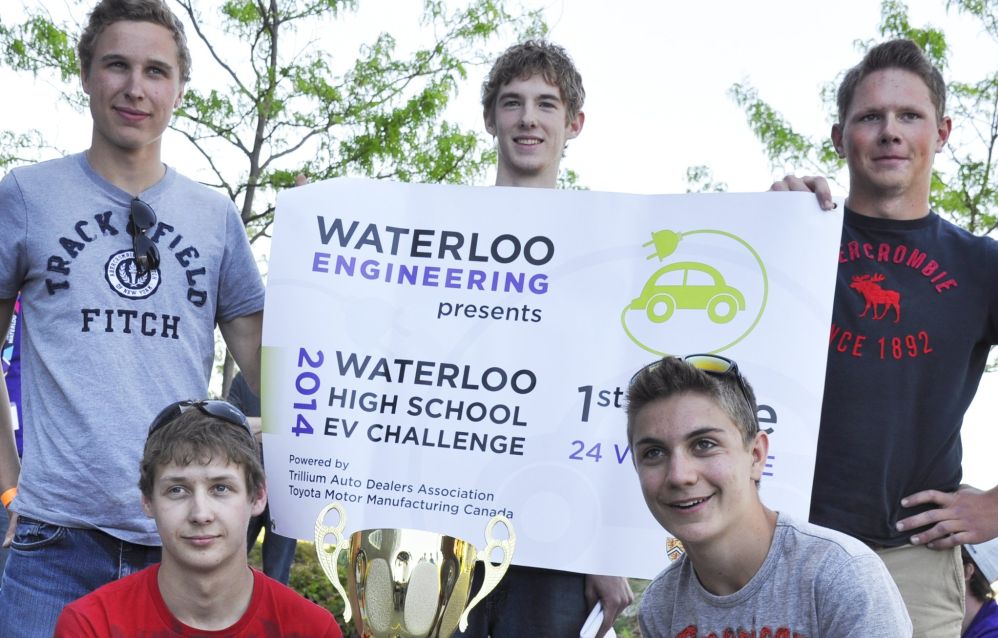 The program — unique in Canada — includes two races, and most cars were in both.

For the hour-long morning contest, they were powered by single, 12-volt, sealed lead-acid car batteries.

During the lunch break, student mechanics, supervised by teachers, rushed to install a second battery, boosting output to 24 volts and allowing speeds of up to 35 km/h for the 80-minute afternoon run.

Although the cars look simple — some resemble soapbox derby competitors — they’re complex machines that require long hours of extra-curricular time over at least a year to build.

Each school uses the same type battery, and similar off-the-shelf motors and controllers. The cars have two bicycle wheels up front and one in back that’s driven by a chain.

Students, in teams of 20 or more, design them, make many of the parts and assemble everything except the frame, which are handled by professional welders to ensure safety. 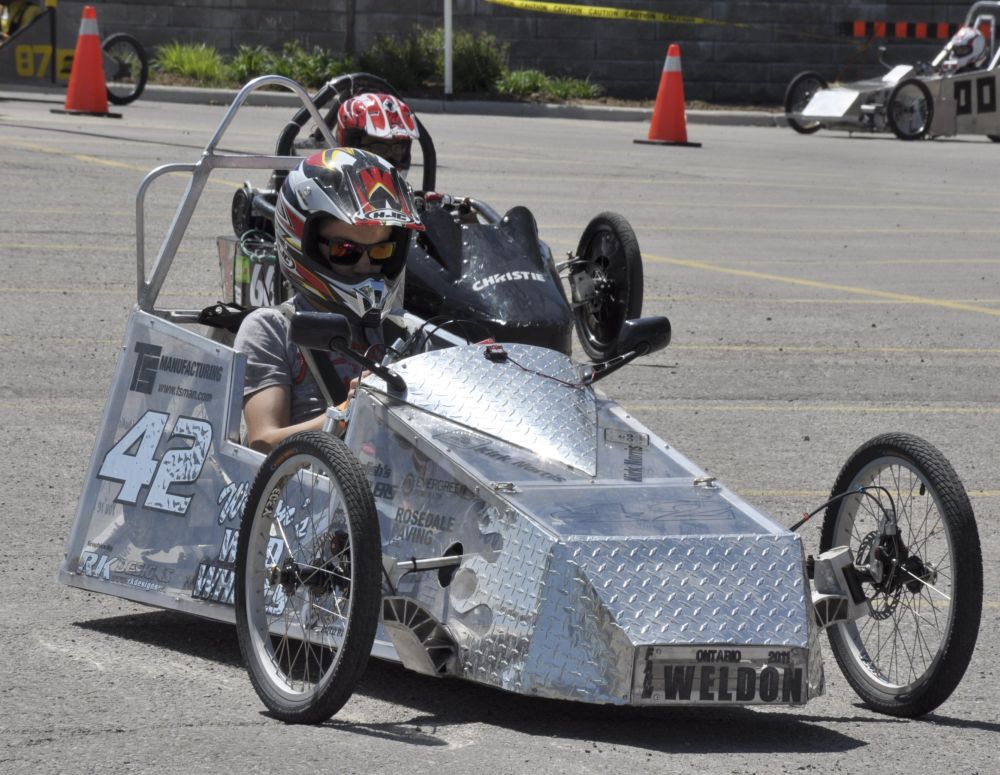 Students determine how well their car will stand up to the rough ride, what wiring should handle the high voltages, how the driver fits and exits, and, one of the hardest parts, getting the steering geometry right, says chief safety inspector Nate Wennyk, whose participation in an earlier challenge with Waterloo’s Bluevale Collegiate Institute, “paved the way for my interest in engineering.”

The main goal is to build a robust, efficient power train and body, says Peter Teertstra, director of Waterloo’s Sedra Student Design Centre, who heads the program. “Having a good functional drivetrain with limited friction losses; that’s where the design aspect comes in.”

Results varied on that score: Better-crafted cars whirred quietly around the track while others rattled and clanked.

The competition gives students a taste of the real world, says Dwayne Alcock, a manufacturing teacher at IE Welden Secondary School in Lindsay, which entered two cars. They must have their car ready on time and it must work.

For many, it’s the path to university and improves prospects for co-op job placements.

The event is actually more endurance test than speed race: The car completing the most laps during the allotted time wins. But the cars are intended to have too little battery power to last for the duration if driven flat out. And their bicycle tires wouldn’t withstand much aggressive cornering. 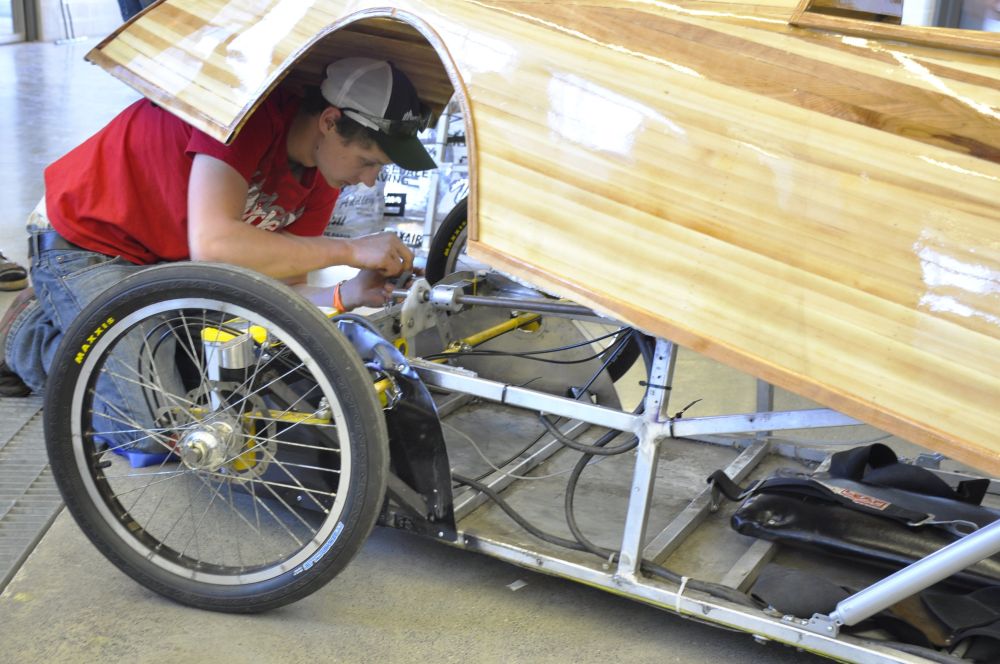 So drivers and pit crews develop strategies to conserve energy while covering more ground than their rivals — for example, taking it easy until near the end of the race, when competitors might be losing battery power and slowing. But with eager young drivers, the strategy is easier to discuss than follow.

Each car must pit twice for a driver change. For safety reasons, drivers must be able to exit in less than 20 seconds. They need an Ontario driver’s licence for the 24-volt race, but not the 12-volt — an attraction for Grade 9 students.

TADA donated a cup for the 24-volt winning team, which also gets a VIP trip to next year’s Toronto auto show, where its car will be displayed.

Weldon won this year’s feature — which included several bumps and a rollover, with minimal damage and no injuries — as one of its cars managed 82.9 laps.

Bluevale was close behind at 81.8 laps, barely ahead of Guelph’s Our Lady of Lourdes Catholic High School. The three schools finished in the same order, and almost as close, in the 12-volt race.

To attract more teams next year, Teertstra plans to offer kits containing batteries, a motor and controller, and other basic parts.

The organizers are also considering smaller batteries for the feature race. Reducing the amount of electric “fuel” would slow the drivers by putting a greater premium on energy conservation.

The car designs are improving and “they had a little bit too much energy available at the end of the race,” Teertstra says. “In the last 10 minutes, everybody sped up. We want to keep the students safe, so keeping speeds reasonable is really important.”