Under a clear blue virtually cloudless sky, the 23rd Annual Gravenhurst Car Show silently opened for exhibitors just before 6.30am on Saturday, June 18, 2016.

Billed as the largest car show in northern Ontario, spokesperson Tara Doyle of the Gravenhurst Chamber of Commerce and a crew of way-too-many-to-mention have been planning this event with their main sponsors: Canadian Tire, Gravenhurst; Wayne’s Tire Discounters; and, Sawdust City Brewing Company since the day after last year’s event ended.

In a slow procession of some of the finest examples of sheet metal ever built in Detroit – even Canada – cars and light trucks of virtually every colour imaginable made their way in an orderly fashion into Gull Lake Rotary Park and staked out their places within the park, guided by enthusiastic volunteers, car people much like themselves who shared tales with one another as the long, hot day progressed.

Some vehicles were original equipment, lovingly and painstakingly restored to perfection: others modified within an inch of their lives, showcasing raw, brute power with modified air intakes and manifolds, carburetors (remember them?) and enough glistening, fingerprint-free chrome to blind passersby. 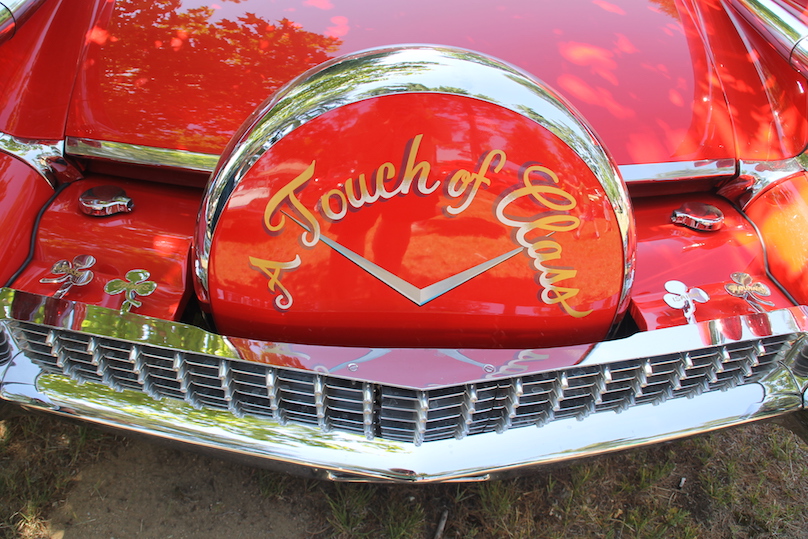 9.00am was the official opening, but a few excited individuals managed to enter a little early, flitting from car to car like a June bug in its final hours, on a mission to see, touch and yes, even smell everything parked on newly-clipped grass. Then they would start again. Even as the day progressed, straggler exhibitors continued to drive to designated areas to park, place a descriptive card on the front windshield and prepare for the guaranteed onslaught of admirers and a barrage of questions. Inevitably, over the course of the day, questions and yes, even answers would be repeated. But it did not matter. This was a fun day for all – regardless of age – adults and kids alike reveled in the occasion. 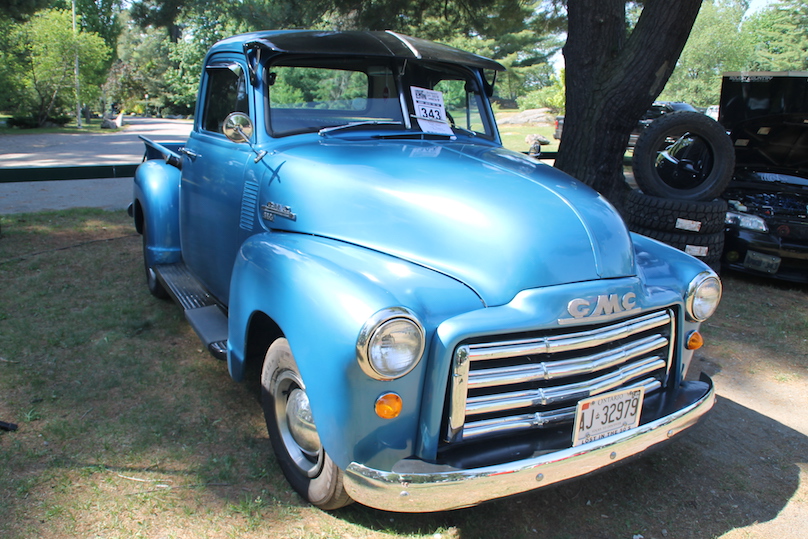 Power and precision was on display, mostly driven, some trailered, from all across Ontario to attend this yearly occasion. It’s a time when enthusiasts, fan boys, gear heads, families and folks who just plain like and appreciate cars gathered for a few hours to admire, lovingly caress baking hot shaped steel, endure the sweltering heat and humidity of the day and the occasional whiff of racing fuel. The conversation was pretty much all about automobiles. And memories. Many of the vehicles exhibited managed to evoke distant recollections for a few. All pleasant. Some funny. Some revealing. All about cars and light trucks.

To this seething throng of enthusiasts and aficionados, there was no such thing as a bad exhibit. Sure, some were more popular than others, but that seemed to depend on the passing demographic; one moment a 1960 Cadillac Coupe de Ville was admired by unblinking eyes, each person turning to their companion – or even a fellow fan, and speaking softly about their obvious reverence for craftsmanship. Then a tricked out low-running customized GMC pick-up would slowly rumble by with a low, “look-at-me” paint job. This, these, were all cool. Back then, life – everything was simpler. Computers were not as prevalent under the hood as today’s technology-oriented machines. Nanny features were not even invented, never mind a consideration. Designers and engineers barely spoke or truly collaborated and everything was bigger, better, stronger and angular. Cars were often given names by their owners. Mostly women’s names. That’s just the way that it was.

The majority of the tons of metal spread over acres of prime parkland on the edge of a lake in the Muskoka region were 25 years of age – mostly older. Many sported Heritage plates. Most were in running order and were absolutely roadworthy. Proud owners would sit in a borrowed slice of shade and talk with great affection about the loves of their lives. Most male owners, wives and significant others did not seem to mind. 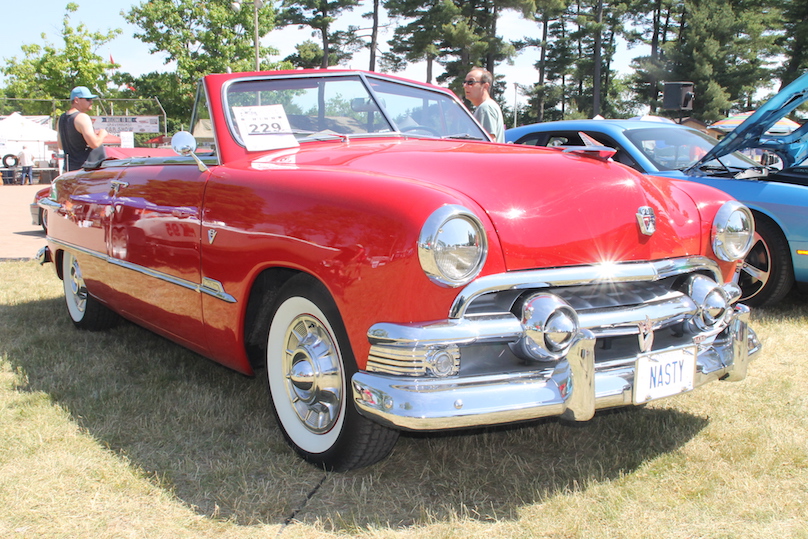 This was not an exhibition of testosterone and machismo.

This was about appreciation. About camaraderie. Some owners considered other exhibitors as their friends. Many travel a summer show circuit. While there may be competitions at each show, this is not where ribbons, plaques and cups hold much significance. Although, truth be told, winning is never scorned.

For years, Len Kwint was a three-pack a day smoker. A terrible habit and one he was prepared to sacrifice for one thing: buying a special car for his wife’s 50th birthday.”

For years, Len Kwint was a three-pack a day smoker. A terrible habit and one he was prepared to sacrifice for one thing: buying a special car for his wife’s 50th birthday. Like many a classic car devotee, he had his eyes on something special; a 1958 Chevrolet Impala. After years of sacrifice and saving, he was finally able to purchase that car from a fellow in Sarnia back in 1992. Immaculate and restored to all its original glory, this auto is loving testament to Detroit’s finest. Gleaming chrome, perfect black paint, a true Nevada car if ever there was one. Over the years, he has done nothing further to the car – other than maintain and regularly wash and wax it. It takes pride of place beside his other treasure – a 1938 Chevy pickup.

If we thought that Kwint was “driven”, he paled when compared to Marco D’Angelo an avid enthusiast of 1959 Cadillacs – especially, Coupe DeVilles. He and his father, Giovanni, had driven down three of their collection from Orillia to show them to an appreciative and often very knowledgeable crowd. Their crown jewel was a gorgeous red drop top that seemed to be the size of a battle cruiser – it was enormous, but it was absolutely immaculate in every detail. Seems he had only owned this beauty for a month. He had, however, been politely talking with the original owner from Welland for more than 30 years until one day, during one of his regular “just-staying-in-touch” semiannual phone calls, the owner relented – and a deal was made.

The moral of this? Never underestimate the tenacity and passion a true heritage car owner has for their vehicles. For Kwint, it was all about Chevys; for D’Angelo, it was ’59 Caddys. Both men knew exactly what they wanted and were prepared to wait until the day arrived when they could lay claim to their vehicles’ title.

Cadillacs are my thing. This is what I live for”

As D’Angelo put it, “I don’t drink, never smoked, have no time for gambling – Cadillacs are my thing. This is what I live for. That and spending time with my Dad – happy Father’s Day, Pops!” he leaned over to Giovanni and smiled broadly, a sentiment that was shared.

Classic cars. Heritage vehicles: regardless of the nomenclature, it becomes a family tradition. It’s in your blood. Part of your DNA. And in some cases, it’s a love rooted in the soul.

ALSO READ:Eye Candy: ‘One of those good Studebakers’