We live in a world where old markets like the taxi industry and even pizza delivery are being revolutionized thanks to the technology offered by smartphones. Are there other industries which traditionally rely on bricks and mortar operations that are ripe for revitalization?

The founder of a new company called GoWrench Auto says that his car broke down in the middle of the day and when he asked his mechanic to make an out-call, he was laughed at. Calling it a lightbulb moment, the entrepreneur says that “There’s clearly a divide between what consumers want and what mechanics are offering. GoWrench was created to close that gap.”

The internet is chock full of stories told by disgruntled consumers who feel the auto repair industry has let them down, from its lack of convenience to the questionable transparency brought on by technicians working on cars behind closed doors. Already thinking about the convenience problem, Lombardo-Bottema then had his own taste of an untruthful mechanic.

GoWrench aims to solve both of these problems. Consumers can load the web based application on their phone browser and summon a local technician to their home or office. The technician then arrives at the appointed time to perform the repairs or maintenance right in front of the customer. The consumer speaks directly with the technician with no service advisor style middleman to “sell extra stuff”.

The concept that the auto industry needs to be re-imagined is one that is becoming more visible within the industry itself. Tesla, a company which for better or worse, does things differently from the rest of the industry, including maintenance. Tesla owners’ cars are picked up at their home or office and taken to a central shop for service, with as little inconvenience as possible to the motorist. Hyundai’s Genesis brand provides a similar service, where the local dealer picks up the customer’s car, leaves a replacement vehicle and then returns the vehicle when it is complete. The industry is changing, but those changes are very slow in coming. 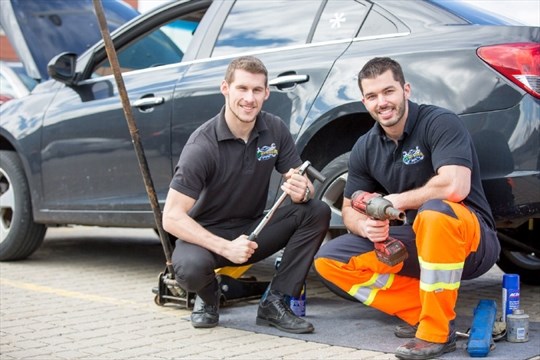 The idea of having vehicle maintenance come to you is nothing new, but it is new in Canada. Back in the early Nineties, a company in the southern United States began marketing mobile oil change services. At the time, I worked for a Toronto area Volvo dealership and a few of my colleagues and I talked about doing the same thing here. We all agreed that while the business would work in the warmer months, there was no way we would find technicians who would work outside, underneath a car, in the snow.

While some of these existing services provide simple oil & filter change type service, GoWrench techs are able to perform much more, including brake repairs and more advanced diagnostic types of work.

Like the traditional industry, GoWrench’s technicians are paid times using a flat rate system. Flat rate is one of the issues which many consumers have with the traditional auto industry’s transparency. When a customer pays 1.0 hour for a job which is completed in half that time, it often throws up a red flag. Lombardo-Bottema believes that most consumers understand how flat rate works and that their pricing is packaged differently than the traditional invoice. The Motor Vehicle Repair act in Ontario requires that an invoice must show “the number of hours billed, the hourly rate and the total cost of labour”, so the packaging can’t be too much different from the rest of the industry.

The GoWrench founder says that their technician’s services are certified and go through a vetting process to ensure that they have the skills needed to perform. Somehow they have found techs who are willing to work in all sorts of weather, ensuring that consumers can have the convenience that our society values today.

To date, GoWrench has been launched in 45 cities in Ontario and British Columbia, including most of the Greater Toronto Area and Vancouver area.