Only 100 exclusive models to be produced costing in excess of £2m (before taxes); deliveries from early 2022.

Join the Conversation (0)
Just when you thought we’d never see an “analog supercar” ever again – stick shift, rear-wheel drive, no electronic nannies or very few, natural aspiration – the man who brought us possibly the best example of pure motoring in recent memory has decided to bring motoring back to its roots.

I speak of course about Gordon Murray, the man behind the legendary McLaren F1 among other race and road cars.  “I have absolutely no interest in chasing records for top speed or acceleration,” said Murray. “Our focus is instead on delivering the purest, most rewarding driving experience of any supercar ever built.” High praise indeed – many may think he’s going a little far, there – but that does mean the existence of a proper h-pattern manual gearbox (yes, you read that right), central driving position like the F1, and rear-wheel drive.

Weight savings and aerodynamics are the orders of the day for what’s currently being badged as the T.50. That means intelligent underbody aerodynamics (think venturis and diffusers to the nth degree) – but that’s just the start of it. According to Murray’s company – Gordon Murray Automotive – the T.50 will actually have an underbody fan – like his famous Brabham BT46B F1 “Fan Car” – to help suck the T.50 to the surface below. Yes: a fan. Murray’s isn’t messing about on what he says he expects “to be the last, and the greatest ‘analogue’ supercar ever built.” The advanced underbody work means that the stuff we see will have less of the cuts, strakes, intakes, and wings we see so much of in supercars today, on examples like the McLaren Senna or Lamborghini Aventador. 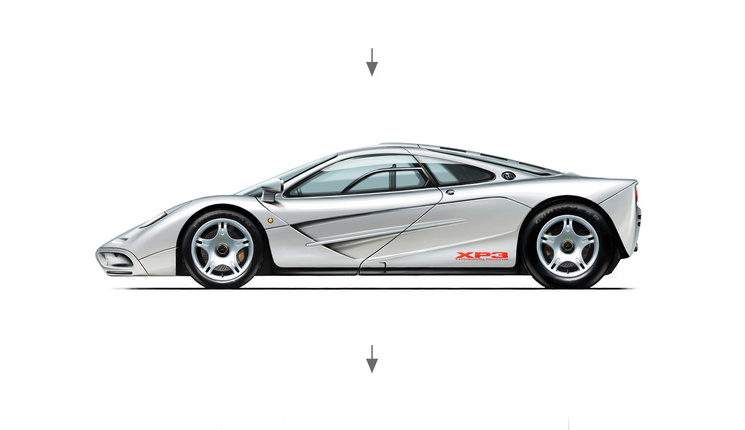 Of course, aero is one thing but you need the power to get going in the first place, and the T.50 should have plenty considering it’s to be powered by a bespoke naturally-aspirated V12 – Vee Twelve! – developed by Cosworth. It’s a 3.9L lump good for 650 hp and 331 lb-ft of torque; yes, there are hypercars and megacars out there today that make more power than that, but since the T.50 will weigh just 980 kg, you’re looking at a power-to-weight ratio of 663 hp/ton, more, claims Murray Automotive, “(than) any other naturally-aspirated sports car designed for the road.” If you want to free up a further 50 hp for a total of 700, a ram-air intake can be installed on the roof.

Much of that lightweighting can be attributed to the fact that every component is going to be built with weight savings in mind, and also through the extensive use of carbon fibre.

Style-wise, the pics released so far don’t show a whole lot, but you can tell that the profile is similar to that of the F1 – a car also developed with aero as a top priority.

Murray obviously sounds confident – kind of what happens when you’ve been creating world-beating supercars and racecars for so long – and we should all be happy that he’s out there fighting the good fight for the drivers in all of us.